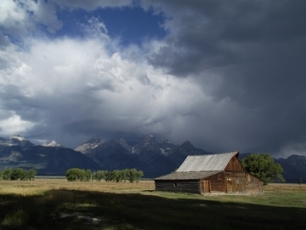 In addition to helping care for the barns and other buildings at Mormon Row, the Tauck grant will also fund enhancements to the culturally-rich properties surrounding the structures at several homestead sites, including the T.A. Moulton barn. In particular, sections of historic irrigation canals – part of an intricate system once used by the homesteaders to divert water to their crops – will be cleared of vegetation and other obstructions, foot bridges will be restored, and the canals’ head gates will be repaired to preserve their capacity to flow with water.

The third initiative funded by the Tauck grant is the establishment and operation of The Grand Teton Hammer Corps, a formalized program that will recruit, equip and oversee the efforts of volunteers performing preservation and repair projects throughout the park. The Tauck grant will fund The Hammer Corps in both 2016 and 2017. In 2016 efforts will focus on establishing the program, hiring a seasonal, full-time program coordinator, and completing an initial round of projects. 2017 plans include the full deployment of The Hammer Corps and the completion of more ambitious projects, to perhaps include work at Mormon Row as determined by the findings of the Historic Structures Report funded by the Tauck grant.

“The landscapes and structures of Mormon Row together tell the unique story of the area’s homesteaders, and the preservation of these incredible cultural assets is critical to keeping the homesteaders’ story alive,” said Tauck CEO Dan Mahar. “At Tauck we consider ourselves storytellers, with our journeys telling the rich cultural stories of the places we visit, so helping preserve the legacy of Mormon Row has great appeal to us. We’ve been bringing generations of Tauck guests to the national parks since our very first tour in 1925. With the National Park Service marking its Centennial this year, and having just celebrated our own 90th anniversary, we’re thrilled to help ensure that the story of Mormon Row endures to inspire future generations of travelers.”

According to Leslie Mattson, President of Grand Teton National Park Foundation, the story of Mormon Row is unique to the region, where most homesteads were isolated from each other by considerable distances. “Rather than establish themselves individually, the Mormon settlers who gave the area its name decided to create a settlement that allowed them to work together cooperatively and share the benefits of a community,” said Mattson. “I think that’s a fitting metaphor for the generous support that Tauck is providing. In working cooperatively with the foundation, Tauck is doing their part as members of America’s National Parks community to protect and preserve the treasures at Mormon Row.”

The Tauck grant to Grand Teton National Park Foundation is just the latest example of the company’s support of the U.S. National Parks. Over the years Tauck has provided more than a million dollars in additional grants to various efforts protecting the parks. From 2003 through 2014, the company operated a volunteer program, first in Yellowstone and later in Grand Teton National Park, that allowed over 17,000 Tauck guests visiting the parks to participate in beautification and preservation projects there. The program was honored with preservation awards by both the White House and the U.S. Department of the Interior.