Imagine that good feeling when I experienced the Metro Manila LRT for the first time and it exceeded my expectations!
► ...many Filipinos still complain about our train systems but having traveled to several countries in Southeast Asia, the Filipinos are still lucky for having this kind of infrastructure.

► In terms of transportation, some of our neighbors in Asia have gone far.

Life is a never ending first time. I thought before that getting older would mean that your exposure to first-time experiences becomes lesser. It was the other way around. As I age, I've found out that the world has infinite undisclosed data ripe for harvest. Becoming older for me means having a wider perspective of the world and a deeper understanding of our existence, hence, we tend to decode more answers for our ever growing curiosities of our ever growing consciousness of the complexities of the universe. Are you willing to unlock them?

I've always been a sucker of first-time experiences. God knows how I treasure my first plane ticket, my first message from my newly opened email account and even the first cotton ball used from my very first blood extraction. If you are a friend or a follower of my personal Facebook account, you probably have noticed that I love posting first-time experiences of my life, ridiculous or not. I even have a special FIRST-TIME-STORIES label on this blog that I highlighted in my homepage. Below are screenshots of my recent first-time posts. 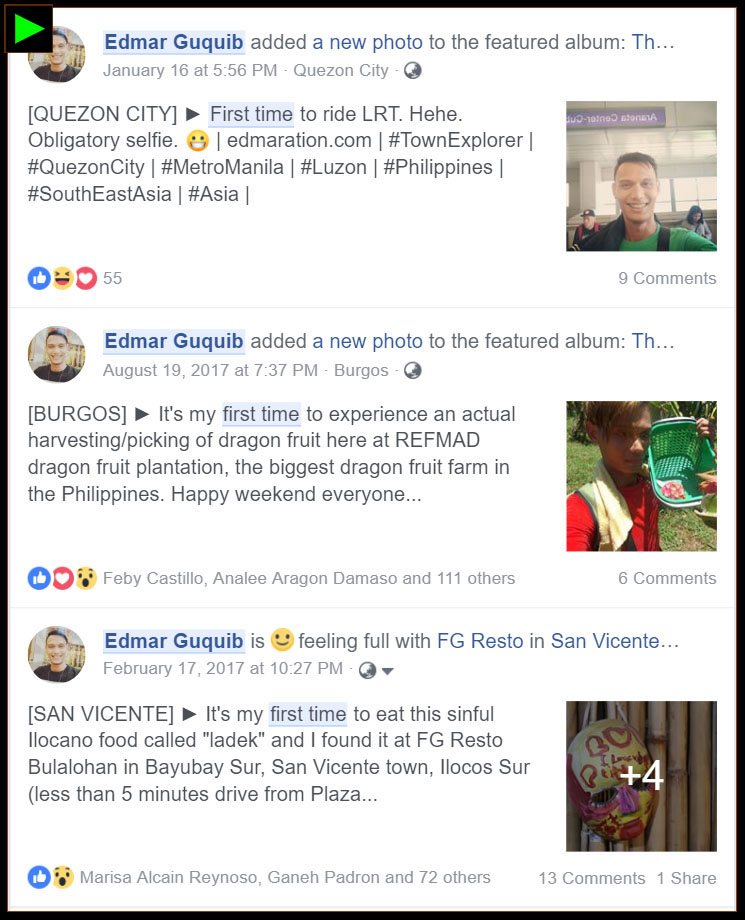 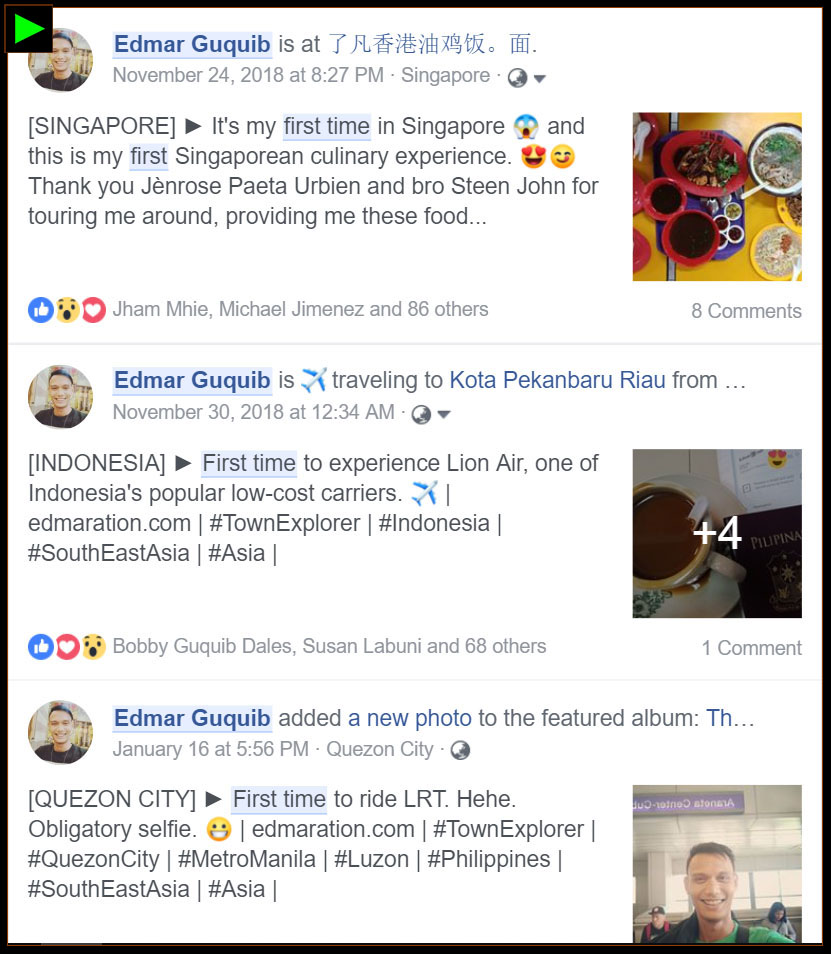 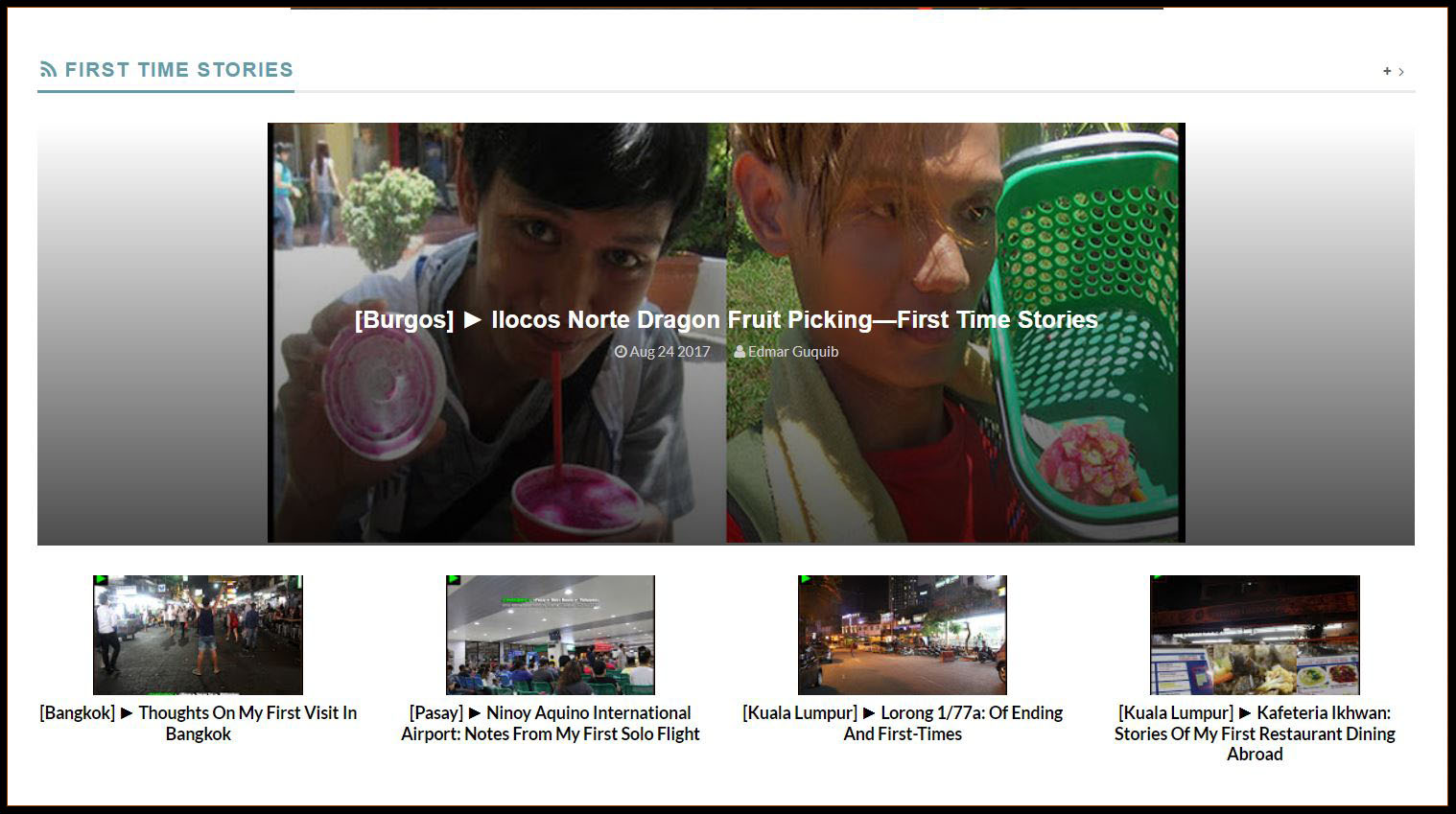 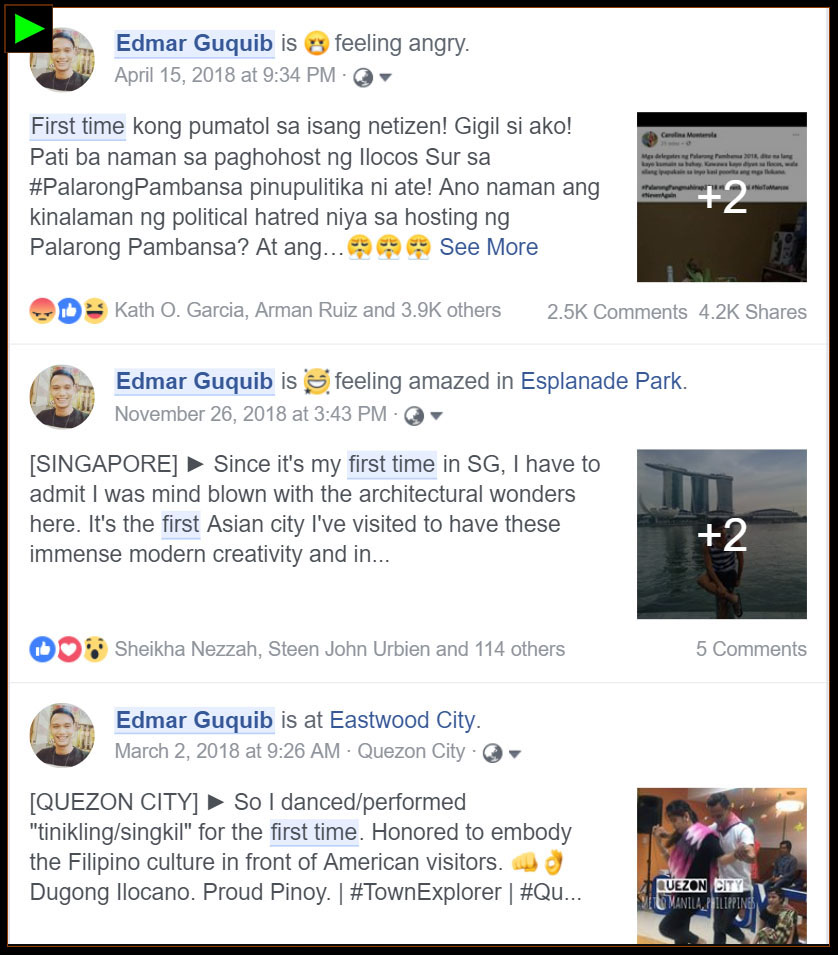 I don't know, but these first-time experiences happening in my life mean a lot to me; and now, here I am again, writing about my first LRT ride in the Philippines.

I've commuted in Metro Manila countless times using MRT though, but not LRT. I failed to 'properly' document my first MRT ride so I wanted to make it sure that my first LRT ride would be well-documented.

My pre-ride impressions about the LRT of Metro Manila were not really good. My first train ride in the Philippines was an MRT ride. I remember how I almost cried to experience such drastic set-up inside the MRT when I commuted for the first time. It was very hot inside and I was wearing a jacket. I couldn't remove my jacket because inside was too crowded that I couldn't move. I was also carrying a heavy luggage that time. Before I entered the train, I was thinking it would be very comfortable inside to my dismay. I was drenched in sweat (and tears) with regrets of riding the train. My first MRT ride was somehow a traumatic experience. It was the longest 15 minutes of my commuter life.

Having experienced the train systems of Singapore, Kuala Lumpur, and Bangkok, the Philippines' MRT was my worst experience. I couldn't help myself but to shake my head everytime I think about it so I concluded that the LRT would be the same.

My standard of a train ride experience in the Philippines was based on my MRT experiences so I was surprised when I entered the platform of Cubao LRT Station for the first time! I personally think that the LRT station in PH is better than Kuala Lumpur's elevated monorail system. Per Cubao LRT experience, ours have more spacious platforms. The ceiling was also high and the train was well-air-conditioned. I really thought before that the LRT in Metro Manila is the same with MRT so my expectation was exceeded.

One thing I love about my previous train rides outside the Philippines is the 'voice-over'. While inside the train, a recorded voice would play to guide commuters of the next station. In the Philippines' MRT, I never experienced this. Most of the time, there is a live voice-over informing the commuters of the current station and God knows how I despise the live voice-over because foremost, the speaker (whoever he is) doesn't speak clearly. He also doesn't pronounce the words clearly. It's like he is chewing something while speaking. Is it hard to speak slow and clear? Huh! P.S. This also happens inside the plane of AirAsia PH and Cebu Pacific. When they speak inside the cabin, it appears like they are rushing, or they have limited time to speak that they speak so fast and so unclear that the announcer/speaker becomes so annoying to my nerves!

Anyway, because of my bad experiences at the MRT of Metro Manila and having experienced the beautiful train systems of Malaysia, Singapore, and Thailand, I concluded that all trains in the Philippines would be like the MRT.

► Exceeding My Expectations and Personal Reflections

Imagine that good feeling when I experienced the Metro Manila LRT for the first time and it exceeded my expectations! Yay! There were LED screens inside to inform the commuters of safety measures which is similar to Singapore. There was also a recorded voice-over of a woman that was so lovely and sweet informing commuters of the next station. Wow! I underestimated our LRT system a lot.

Inside the train (LRT) was a delight. Surprisingly, it was not crowded, in Tagalog, we would say, "Sakto lang!" The train is more spacious compared to the EDSA-based MRT and it reminds me of Singapore. However, one thing that caught my attention was the massive advertising of a Netflix series called Sex Education. I watched the trailer for the purpose of this blog post and if you were to ask me, my instinct was true that this film is NOT for everybody. I've seen so many minors inside the train seeing the word sex everywhere. I'm not KJ, but try to put yourself in other's shoe. If you are a parent, would you like your minor kids to be exposed to this kind of advertising that promotes a film not suitable for them? Please don't put your political correctness to an idiotic level by telling that it's the duty of the parents to take care of their kids. Shut up! Our kids should live in a healthy society. It's everyone's duty to be a good example to all kids everywhere!

Anyway, heavy advertising is not new in Southeast Asia's train systems so this encounter wasn't surprising for me.

Yeah, I know, many Filipinos still complain about our train systems but having traveled to several countries in Southeast Asia, the Filipinos are still lucky for having this kind of infrastructure. Sometimes we delve too much of the 'colonial mentality' concept that we fail to find the silver lining of the not so pleasant situations that we may experience. Yes, I also like to demand for the best infrastructure in the world, even better than Japan if possible, but I try not to complain at all times because we also need to entertain the concept of 'being grateful' in our hearts once in a while.

It's our right to rant and throw grievances against our government but you can never go wrong of having a grateful and cheerful heart. If you cannot be grateful all the time, try to experience it at least once in your life. The feeling of being grateful is so precious and abundant like diamonds but becomes very rare because only a handful of people are willing to wear its prestige. When you think you don't need to wear the prestige of gratefulness, it's ok. Life is a matter of choice. If you choose to live a life full of hatred, dissatisfaction, disappointment, and/or burden in your heart, so be it.

It's your right to choose a miserable life. It's freewill. But if you ask me, I choose to live a life full of gratefulness, contentment, joy, and peace. It's been my choice to live this way. I may had a bad experience during my first MRT ride but I've learned to adapt, adjust and appreciate how our MRT system is helping many commuters daily in spite of the imperfections. You see? This first-time LRT experience of mine is giving me a lot of insights. I told you, I'm a sucker of first-time stuff because they give me wisdom.

Anyway, I was also surprised to see the ticket-vending machines located at every station which was, and is, convenient. To be honest, I never thought these ticket machines existed in our LRT at least.

When I was in Singapore, my heart was full of joy to experience their sophisticated subway system. What I liked about Singapore's MRT was the easy-to-follow map. There were several lines illustrated on the map, color-coded, that were easy to understand. God knows how I prayed for the Philippines to have this kind of system. Back to Metro Manila, I learned that we also have different lines, color-coded too. I found out later that the Cubao Station belongs to the LRT Line 2 or the purple line. I love the fact that we also have the same color-coding scheme like Singapore. Although we are far from the level of Singapore yet, it felt good to learn that we also follow the same system because it's simple and easy to understand.

In terms of transportation, some of our neighbors in Asia have gone far. It's sad, knowing that the Philippines' LRTA system is the first metro system in Southeast Asia, earlier than the Singapore MRT by three years. We've been stuck. SMH...

The reason why I experienced the train systems of other countries first before the Philippines is because I've always ditched to explore Metro Manila. Coming from Vigan, my usual route was to alight at Cubao then ride a taxicab to the airport. I've never stayed in Metro Manila for more than a month (not until in 2018) so I wasn't familiar of the routes and directions in Manila. The most convenient way for me has always been a point-to-point transport. I was able to experience the train systems outside the Philippines because friends of mine who are/were based in these cities introduced me to these transportation systems. My friends became my tour guide, hence, my exposure to these train systems. My train experience in Kuala Lumpur was different though which I wrote here in details.

So where this first LRT ride of mine brought me? What's the reason why I finally decided to try the LRT? These questions will be addressed soon in the Part 2 of this series. | end | ✈ This post was filed under the category "Train Stations and Railways." See more posts related to this below.

✈ The maps I used on this post are from maps.google.com.ph.

✈ The insights, condition and name of places or properties I mentioned here are based on the facts and situation on the day of my visit. Take note that you may have a different experience when you try the activities or see the properties/places mentioned here. Names of places and properties may also change by time.