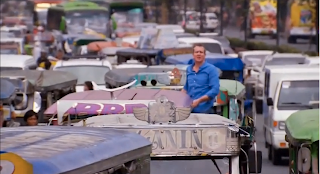 The show's title tells us everything already. Andrew Younghusband, host of Canada's reality TV show Don't Drive Here, has only one goal: to handle a jeepney just like a local without breaking any traffic rule.

In order to accomplish that, he had to learn first how to drive a car, a motorcycle, a tricycle, a cab, and a stretched limousine (didn't know we had one here!). He also tried being an MMDA enforcer. The first minute and a half minutes already got us hooked and as the episode unfolds, we learn (or remember) how harsh Manila's traffic is for both drivers and pedestrians.
(See video below).

He might be exaggerating sometimes during the show but the facts are not exaggerated (our comments in parenthesis):

And since we're still not yet done on the pork barrel scam, our lawmakers should get out of their offices and travel like millions of people living in Manila, so they'll see how dangerous it is in Manila. At one point, we are told of a simple reality (and cheat!) - that it is better for a traffic enforcer to let someone beat the red light than apprehend the driver and cause traffic behind him.

Filipinos aspire to own cars to escape the horrible inconvenience caused by taking public transportation and walking in Metro Manila. That's one sure sign that we're thinking backwards. Urban places are measured by the friendliness and efficiency of public transportation, and not by volume of cars.

Let us know your thoughts!

This post first appeared on Directions, Routes, Maps, Shortcuts In Metro Manil, please read the originial post: here
People also like
Round And Round We Go:  Tip On Furnishing a Circular Patio
Are You Ready To Go On An Adults Only Erotic Vacation?
Why SEO Is The Next Big Thing in the Real Estate Industry
30 Cheap & High ROI Home Renovations (And 5 Costly DIY Mistakes)
Home Workouts for Weight Loss
Creating and Selling Digital Products
Telegram Marketing solutions
Private And Luxury Chauffeur Melbourne Service For Your Convenience.
Well said Mr. PM, We’re racing with time but..
What You Need to Know About Sydney Epoxy Flooring