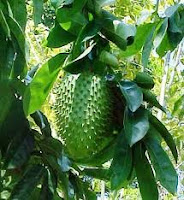 Circulating around the internet these days, this latest "favorite" tree has been making headlines everywhere touting it’s remarkable cancer curing properties discovered and actually being proven in scientific studies. In case you haven't seen the articles, I’m referring to the Soursop Tree (Annona muricata), known in Spanish as the Guanabana (say that 3 times fast!). The Guanabana fruit is one of the most delicious and odd looking tropical fruits you will commonly find here in Costa Rica. Guanabana fruits are easily recognized in local farmers markets with their large heart-shaped form, rich green color, spiny skin and a white, creamy pulp peppered with elongated, black seeds. The pulp when eaten straight from the fruit is a bit sour to the taste buds…thus earning the name "Soursop", but with a little added sweetener, this tropical gem blends into a creamy, fruity smoothie that rivals a fattening a much less healthy milkshake. It is also commonly used in ice creams, yogurts and other tasty delicacies.

The Soursop Tree is a really quite small considering the size of each fruit it produces. Growing up to 10 meters (a large specimen), this can make this non-descript tree ideal for a home garden orchard. The young branches, as well as the trunk of the tree eventually bear pale yellow, conical flowers which later turn into the large green fruits. The ovate, glossy leaves have a peculiar odor when rubbed and have proven to be valuable as a natural medicine in both ancient and now modern herbal remedies. In early times, the leaves of the Guanabana were used for tea to reduce swelling of the mucus membranes or to treat liver disease. The black seeds were often crushed and used as a vermifuge to help with parasite infestation. All parts of the tree were also ground and used as a sedative or as an anti-convulsant. The fruit was used to reduce joint pain, to treat heart conditions, as a sedative, to induce labor, or to reduce coughing or flu symptoms, just to name a few of its many benefits. 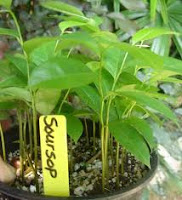 Thrifty home gardeners can start their own Guanabana trees simply by saving the seeds from a fruit you buy at the local market. Plant one oblong seed per planter filled with fertile soil and sit back and relax. Germination can take as much as 2 weeks or more,
so just be patient and keep the container watered several times a week. Once the seedlings begin to emerge when they are around 30cm, you will want to transplant them to a more permanent place in the yard. These trees do well on a wide range of soils, as long as good drainage is present. It takes a Guanabana tree some 5 years before it can begin to produce fruit, so you need to be in for the long haul when planting this unique tree. It’s important to protect the trees and fruits from disease and insect attacks, so it is not uncommon to see these fruits covered with loose recycled plastic bags as they mature to protect the fruits from fruit flies without the use of harmful insecticides, as well as in some cases, citric oil is rubbed on the bark of the trees to help protect them from other diseases. 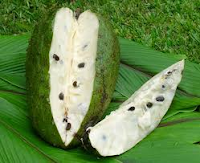 The leaves, roots and bark of the Soursop have also been studied extensively by some of the more prestigious institutions known for their cancer research departments. These institutions such as the Health Sciences Institute, Journal of Natural Products, Catholic University of South Korea, Purdue University, National Cancer Institute, Cancer Research UK have definitively concluded that the Guanabana contains special organic compounds called "annonaceous acetogenins", which effectively target and kill malignant cells in 12 types of cancer, including colon, breast, prostate, lung and pancreatic cancer. These acetogenins are inhibitors of enzyme processes that are only found in the membranes of cancerous tumor cells, and have no toxicity to healthy cells. These means they not only attack the bad cells and leave the good ones to do their work, but the natural compounds in Guanabana lessen the side effects like nausea, hair and weight loss during the treatment. The tree compounds have proven to be up to 10,000 times stronger in slowing the growth of cancer cells than Adriamycin, a commonly used chemotherapeutic drug, which is pretty impressive stuff!

These studies have confirmed the anti-tumor, anti-parasitic, insecticidal, and anti-microbial activities of Soursop, which indigenous people discovered centuries ago and yet, the US government seems to dispute the documented findings! 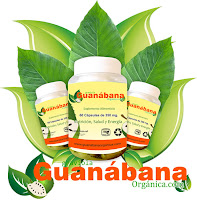 As rapidly as excitement had skyrocketed about the Soursop, skeptics rushed to denounce the "cancer cure" as a fraud and scam afflicting the needy, the desperate, and the gullible. The Federal Trade Commission (FTC) swooped in to fine and close various businesses that had unwisely reported an ability to cure cancer. And in September 2008, Medical News Today publicized the FTC's actions, quoting its director of the Bureau of Consumer Protection, Lydia Parkes, as saying: "There is no credible scientific evidence that any of the products marketed by these companies can prevent, cure, or treat cancer of any kind".

Is this a Big Pharma conspiracy or what? We need to focus on not just enjoying this delicious fruit, but helping people with cancer as well!! So when if Costa Rica, if you see this fruit at your Costa Rica hotel, or have the chance to buy "Guanabana", "Soursop", "Graviola", "Pawpaw" or whatever it may be called in
that part of the world at a local market, jump on the opportunity! Not only will you get a sweet tasty surprise, but you may end up eventually helping the world come up with a natural remedy that could lead to lessen the suffering cancer patients currently must endure! Now that is Pura Vida!

Cancer fighting qualities aside, next time you find the opportunity to taste Guanabana, I can personally recommend its sweet pleasures! Be it fresh, yogurt, ice cream, natural juice or a delicious smoothie, its unique tropical flavors will win you over immediately!

Watch this video for more information on how to prepare the fruit, as well as for the sheer entertainment!
"RasKitchen", the Rasta Mon of cooking and the benefits of Soursop. He speaks English, but we still needed the subtitles! "Good for your dick mon!" I love at the very end when the gringo really does not want to take a sip of the Guanabana juice, as I think he just watched Rasta Mon prepare it in less than sanitary conditions. It's all good "mon", "Good for the Dick"!! Now that is Pura Vida at its best!!


Author:
Kimberly Barron, originally from Malibu, California has lived in Parismina and Manuel Antonio, Costa Rica for 20 years. Starting as a certified tour guide, she spent 15 years managing fishing lodges on the Caribbean Coast and later 4* & 5* Hotels on the Pacific Coast of Costa Rica. Currently semi-retired, Kimberly still works as the Marketing Director for Byblos Resort & Casino and Hotel Makanda by the Sea.