It’s September again and in Costa Rica that means “Mes de La Patria” (Patriotic Month)! This colorful time finds the entire country in a month long celebration of their Independence from Spain with patriotic displays of their red, white and blue flag, colorful parades, thematic dances, concerts, the march of “Faroles” (more on that later) and any other number of celebrations throughout the country. Most events culminate around “Dia de Independencia” (Independence Day), which takes place on September 15th each year!

A country rich with national pride, Costa Rica encourages its citizens from a very young age to appreciate their Independence Day traditions which are to be celebrated 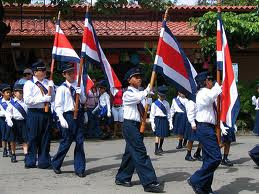 and passed on to future generations. Schools plan elaborate patriotic displays and lively celebrations both the night of September 14th, as well as more parties, parades and civic marches on September 15th, an official National Holiday. For the school children, this month marks the culmination of many months of patriotic preparation, social studies on the importance of the date, as well as providing a special night to show off their artistic talents with the march of the “Feroles” (elaborate homemade paper lanterns).

Although September 15th is the official date to recognize Costa Rica’s independence from Spain in 1821, unlike independence battles common to many other countries, this actually wasn't a particularly significant event for Costa Rica at the time, as the 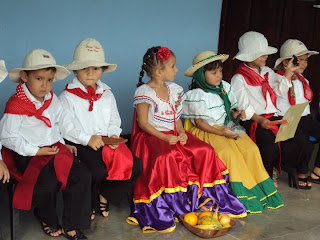 country had basically functioned independently for years from the Capitanía General of Guatemala. However, after the final Spanish defeat in the Mexican War of Independence (1810 to 1821), the authorities in Guatemala declared Independence for all of Central America. So, even though the official date of independence is in 1821, Costa Rica had basically been on it’s own for some time due to Spain's lack of economical, political and even religious interest in this very poor region.

Nonetheless, the “Ticos” take a great sense of pride in their freedom and their

official festivities actually begin on September 14th when a series of runners carry the “freedom” torch from Nicaragua (stopping for Costa Rica in the city of Cartago) and continue all the way to Panama. This is meant to be a re-enactment commemorating history when an official “news” runner ran from border to border of the then Federal Republic of Central America, notifying the people of the region of their official liberation. Costa Rica did not actually get the news until October 13th, 1821!

The runners, selected from local schools throughout Central America to carry the torch an average of 500 meters each, take on their task with great honor, as the 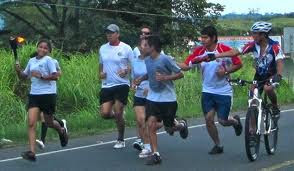 mission serves as a great source of patriotic pride throughout the region. These runners cross the Nicaraguan border into Costa Rica each year on the eve of the day of independence arriving to the (then) capital city of Cartago, where the torch is usually welcomed by the acting president of the country, presently…. Laura Chinchilla. At this same time, most of the country grinds to a halt as almost all TV and radio stations broadcast the national anthem, with most citizens singing along whether they be young or old, home or standing on a street corner, whether riding a bus or driving a car, wherever they may find themselves, their enthusiastic patriotism is both humbling and contagious.

beginning of the “Parade of Faroles”. These often elaborate homemade paper lanterns (with candle or light source inside) are meant to symbolize the original torch run and are proudly carried throughout the streets overhead on short poles by children, with their parents

generally following closely along for safety purposes. The faroles are family projects and their design and size can vary greatly from child to child. Some resemble small “Tico” houses, others look like glittering globes, and others are elaborate “typical” scenes of churches or well known national symbols found in Costa Rica. The march of the faroles is often followed by a parade of children dancing traditional dances in adorable typical costumes….a sight that should not be missed! 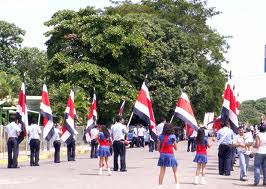 now includes the adults, important town functionaries, patriotic community members, and just about anyone who chooses to march along and show their pride for Costa Rica. Folks that live along the parade route generally have their houses and yards decked out with large Costa Rican flags and banners to celebrate the big day and they enthusiastically wave their flags as the parade marchers pass by. 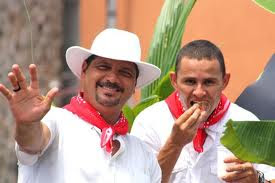 September, you are sure to take notice of the many festive displays of Tico pride and patriotism just about everywhere you go throughout the country. Therefore, don’t forget to join in and wear your own red, white and blue in celebration of Costa Rica’s “Mes de Patria”, the Ticos will welcome you with open arms and their usual big smiles will get even larger as the whole country celebrates Independence and Democracy!!

Sing along to the Costa Rica National Anthem!