The Majestic Toucans of Costa Rica! A Fine Sight to See! 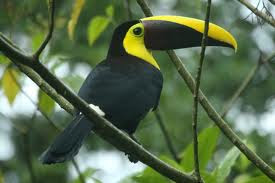 I don't think anyone will argue the fact that Toucans are stunning birds! From their unique shape to their spectacular and brilliant coloring, these majestic flying wonders are one of the most popular "poster animals" for the tropical forests of the Americas as well as for visitors traveling to Costa Rica. The Toucan family, Ramphastos Sulfuratus, is classified with the woodpecker family and contains more than 40 species total. Toucans and the smaller species of Toucanets and Aracaris all mostly found in the tropic areas of the Americas with a total of six species alone being found in Costa Rica and commonly seen while driving or staying at your Costa Rica Hotels. From the country’s Pacific slope to the Caribbean lowlands, visitors can observe the following Toucan Species: Keel-Billed, Chestnut-Mandibled, Emerald Toucanet, Yellow-eared Toucanet, Collared Aracari and the Fiery-Billed Aracari.

Sightings of toucans in the wild is always a thrill, and generally not difficult in Costa Rica with the large size of the bird, its 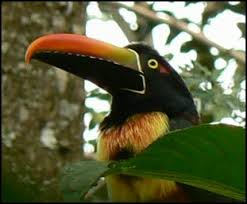 bright colors, as well as the oversized and colorful bill that leads the way. Toucans are usually first noticed flying from treetop to treetop in mating pairs or in small groups. Easily recognized by the bird's most distinguishing feature the colorful, disproportionately large bill, this bird's bill is actually light, mostly hollow, and serves as their primary tool for manipulating the main staple of their diet fruits and seeds. However, once you learn to recognize the Toucans call, this is often a much easier to first pick them out of the dense rainforest.
Color and size variations can occur between species, but all Toucans are frugivores, eating fleshy fruits such as papaya, cecropia, berries and palm. They typically forage in the middle canopy layers of the forest and occasionally supplement their diet with eggs, small reptiles, insects and bird hatchlings they find. 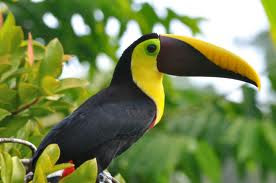 The Chestnut-Mandibled Toucan (Ramphastos Swansonii) is the largest toucan in Costa Rica. Its multi-colored body is generally black with a yellow bib, and its bill is brown on the lower portion and bright yellow on the upper. The beautiful Keel-Billed Toucan (Ramphastos Sulfuratus) inhabits lowland and mid-elevation forests and is commonly spotted throughout the country. This vibrant bird has a black body, blue feet, a yellow chest and face, and a rainbow-hued beak with a scarlet tip.

Populations and Habitat
Toucans are relatively large active forest birds, usually observed in flocks of 2 to 12 members and sometimes even more. They follow each other from one 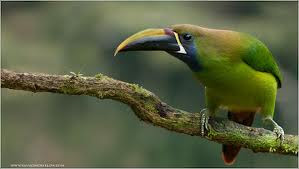 tree to another, usually staying towards the top of the canopy, though they will occasional come down to feed off a favorite shrub or to snatch an occasional lizard or large bug. The birds are playful, grasping each other's bills in apparent wrestling contests, as well as tossing fruit to each other or sharing their finds from beak to beak at feeding time. Despite its large size, the bill is surprisingly light, and enables the birds to thrust deep within tree holes in search of food or lodging.

It has been observed that individual fruit trees are sometimes defended by a mated Toucan pair from other scavenger toucans or other frugivorous birds, including the making of threat displays against other toucans such as the larger Chestnut Mandibled toucans (the largest in Costa Rica) which have been know to bully the slightly smaller Keel-Billed Toucan's by chasing them away after they successfully locate a fruit-laden tree.

Toucans are common residents in many regions of Costa Rica, threatened mostly by extensive deforestation in their natural 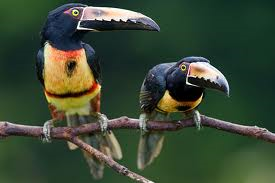 habitats. Though none are currently considered a threatened species in Costa Rica, there are still many challenges for these spectacular birds as more and more regions are inhabited 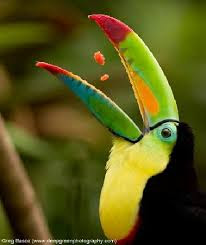 by humans. Some toucans, such as the Chestnut Mandibled Toucan have suffered substantial population declines in heavily deforested areas of Central America, and others have been forced to adapt to living more and more in partially developed rural areas. These flamboyant birds can easily be spotted commonly in Carara National Park, Tortuguero, Manuel Antonio National Park, and many parts of the Central Valley and Guanacaste Province.

Reproduction:
Once a male Toucan partners with a female, they mate and remain together as a pair through the nesting season, foraging and parenting as a couple. Mating pairs dote on one another, feeding their companions fruit and preening their feathers. Toucans generally lay two to four eggs in a mating season. After 16-19 days of 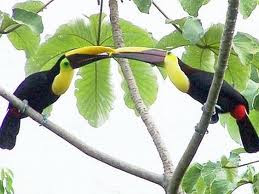 incubation, the blind and naked nestlings emerge. The young are fed by both parents and remain in the care of the parent birds for six weeks while their beaks fully developed, their plumage comes in, and they are strong enough to fly. Toucans typically have two or three clutches a year; though it is not completely known if they keep the same mate or have a new one for each breeding. 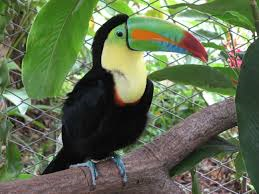 What does the Toucan diet consist of?
Toucans are frugivores, so they eat mostly fruits and nuts. However, they occasionally snack on insects and small lizards as well.

What are the predator threats to Toucans?
Snakes and lizards often raid bird nests, effecting the ability to reach adult numbers. Also, birds of prey, such as eagles and hawks can be a threat to the smaller or younger species. Felines, such as jaguars and margays will also eat a toucan given the opportunity.

How do Toucans protect or defend themselves?
Toucans nest and sleep in hollow tree holes. Toucan groups will often make a raucous chorus of noise should a predator approach the flock, usually serving to scare off the threat.

When trying to spot Toucans, where should I be looking?
Toucans generally live in the upper canopy layer, where they can build nests and better protect their young from understory and forest floor predators, as well as guarding against extreme inclimate weather.

Beyond their natural beauty, why do we need Toucans? 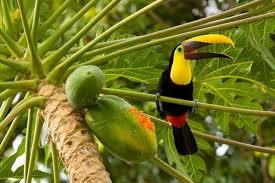 Toucans are an integral part the rainforest eco-system due to their extensive spreading of fruit seeds. They eat the fruit, at which time the seeds pass through their stomachs unharmed and are later deposited in other parts of the rainforest to produce a new tree. In other words, many forest trees grow under a parent tree due to fallen or dropped fruit, but the Toucans have important work to disperse eaten fruit seeds ensuring a variety of fruit trees proliferate throughout the rainforest system as the birds travel.

What purpose does the large Toucan bill serve?
In the Journal of Science a team of researchers has discovered the primary purpose of the large Toucan bill… to stay cool. Apparently Toucans can regulate the flow of blood to their bill to stay cool throughout the day or to conserve heat as needed should the weather turn cold. With a bill that makes up 30% of their size it’s like having their own personal radiator system!

So the next time you spot one of these amazing creatures, not only will you be mystified by their pure beauty, but you will have a new appreciation for the important purpose they serve in the Eco-Systems of Costa Rica! Happy Bird watching!!

Learn more about the Toucans of Costa Rica:

The Majestic Toucans of Costa Rica! A Fine Sight to See!