“Carnavales” in the City of Limon: An Annual Costa Rican Tradition! 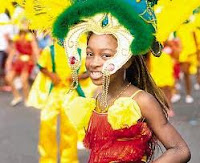 If you are planning a visit or vacation in Costa Rica soon, in only days Costa Rica's port town of Limón on the Caribbean side of the country, converts to an all out party to celebrate “Carnavales”! Vaguely disguised around celebrating Columbus Day (October 12th) or “Dia de Las Culturas” (as it is known in Costa Rica), locals as well as every strange character you can think of join together in the overconsumption of alcohol, while dancing and parading the streets of Limon to the popular Latin beats of blaring Calypso, Reggae, Samba, Salsa and many other tropical rhythms! A good time is generally guaranteed, all in the name of history, culture and a legitimately good reason to Party!

Background of Limon:
Limon (Spanish for Lemon) is the largest “city” on the Caribbean side of Costa Rica, as well as the center for Costa Rica’s largest commercial shipping port in nearby Moin. Serving as the capital city of the Limon Province, Christopher Columbus set anchor in 1502.

It is said that Limon was named after the large lemon tree that used to grow where the City Hall is now located, but that rumor has not substantiated over the years.
Also known at the Pearl of the Caribbean, Limon is an exotic province characterized by the friendly openness of its culturally diverse population, as well as the richness of its Afro-Caribbean customs.
Limon’s economy is based primarily on banana, cacao and pineapple production and exportation, as well as the raising of cattle, though the yearly cruise ship season brings a large influx of tourism to the area. Considered to have the largest population of black people in all of Costa Rica, the Afro-Caribbean culture derives from mostly Jamaican descent. Originally brought to this area as slaves to build the railway connecting the Atlantic coastline with the Central Plateau (San Jose) for the shipping of goods by land, a large Chinese immigrant population also remains from this same ambitious project.

Highlights of “Carnaval”:
The first Carnaval (that is the correct spelling for Costa Rica), was held in 1949 and was the brainchild of the late Alfred Henry King and friends, who felt it was a good opportunity to unite the Costa Rican culture (originally descendents from Spain) together with the primarily black

Caribbean Culture (mostly African, Caribbean and Chinese descendents), which had suffered strained relationships throughout Costa Rican history. In just over 60 years, the Carnavales de Limon is now considered the most popular Festival in the entire country. It’s interesting that Costa Rica does not celebrate Columbus arriving to “America”; it celebrates the uniting of cultures. Pretty forward thinking!
During Carnaval, throngs of people line the streets to watch and cheer on the “beauty queens”, loud marching bands, and to see the brightly colored costumes of the “Comparsas”. Colorfully dressed and adorned coordinated dance troupes, the Comparsas wildly and skillfully shake their booties (booties of ALL ages and ALL sizes!!)to the loud tropical beats of mostly Brazilian Samba & Latin Salsa for miles and miles. It is quite a loud drum banging, hip swinging, cuchi cuchi type show, worth the 2.5 hour drive from San Jose!


My own Adventures at Carnaval:
Having lived on the Caribbean coast for 10 years, I have had the pleasure to personally attend Carnaval. Beyond the great live music throughout the 10 days of the event, one of my favorite parts (and there are many) is the Carnaval Infantil (Children’s Parade). Large macho men run around wearing large “muumuu” style dresses with HUGE handcrafted masks on their heads (see picture). 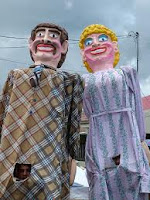 The “Mascaradas” as they are known, consist of men who play a game known as “Rass’em”. The lucky guy wearing the large mask (check out the peep hole in the picture, so they can see where they are going) chases the other men in the group, and when he is caught, the next guy has to put on the mask and dress and start parading around. A pretty amazing sight for this “macho” society, and really quite entertaining, if not a little creepy!
At night, the Limón Carnaval really comes to life! It’s like an enormous block party with everything located outside in the warm tropical air, just like a county fair, only A LOT crazier!! Rows and rows of booths (or “chinamos” as they are called here) of food, drink, handicrafts, local delicacies (more on those later), and dance floors dot the area and there are always people dancing in the streets (literally)! I 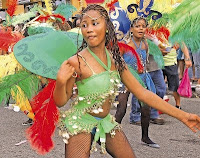 personally love the Reggae music coming out of houses, offices and every corner of the city, that is my kind of music “mon”. My biggest challenge is trying to understand the Jamaican Creole dialect. I speak English and am fluent in Spanish, fortunately so are most of the inhabitants of Limon, as otherwise, I would be at a loss for much of what they are saying in their unique dialect. Whoppin? (What’s happening?) Watcha got? (What time is it?) Just a few examples that caused initial confusion on my part, but now seem a natural part of conversation!

The Food of Limon:
Visitors have not had the full Limon experience and definitely not the Carnaval experience without trying some true, authentic Caribbean style food. First and foremost, you must try the “Rice and Beans”. This is not your everyday “gallo pinto”, though it does look the part. This “rice and beans” is made with coconut milk, and if you are really lucky, has a touch of the super hot Panamanian Chilies thrown in for a surprise kick. Some other favorites of the area are the ubiquitous “Pan Bon”, similar

to Christmas Fruitcake in the USA and just as nasty to me, as well as “Pati”, a wannabe tasty empanada and Patacones (double fried Plantains), everything’s better fried!! Am I right? My very favorite has to be…… (drum roll please)…..”cajeta”. A delicious coconut candy with the texture of very firm fudge, this candy can be found sold on almost every street corner, store, bus stop or “chinamo” throughout the City. (I have some stashed in my refrigerator right now.)

In Summary:
If you haven’t had the good fortune to visit the Province of Limon during your Costa Rica vacation, it’s not just about the beaches to the South, or the endangered Marine Turtles to the North! The actual City of Limon is worth a visit, and I can’t think of a better or more exciting time to visit the area then during the yearly celebration of Carnaval!

“Carnavales” in the City of Limon: An Annual Costa Rican Tradition!