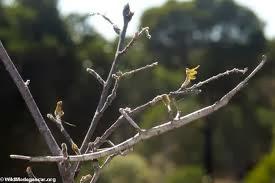 When visiting Costa Rica, it is always wise to double check anything before grabbing it! Bugs, snakes, plants.....all have potential for a dangerous encounter if you are not careful! However, one of the most popular discoveries, if you even notice it while hiking, are the ubiquitous Walking Stick insects. Generally found in varying hues of green or brown, with some 3000 different species found around the World, a few species are actually able to change color slowly as needed to blend into their environs. These unique bugs have one of the best camouflage systems available in the wild, since these insects resemble the twigs and branches among which 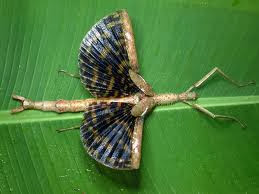 they live, providing it with one of the best natural camouflages found on Earth.
Found predominantly in the tropics and subtropics, stick insects thrive in forests and grasslands, where they feed on mostly leaves. Mainly nocturnal creatures, they spend much of their day motionless, hiding under plant leaves from the hot sun or the strong rains that can come suddenly in the Tropics.

Local Walking Sticks can be as small as 1" and reach lengths of 4”s, with males generally smaller than the females. The largest 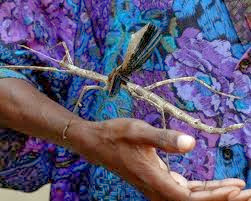 North American species can grow to lengths of 7 inches, and there are recorded tropical species that can reach a whopping 22 inches! The insect's legs and wings are attached to the middle section, or thorax, comprising the majority of the body, but a Walking Stick that loses one of those delicate legs is actually able to regenerate it, either completely or partially at its next molting.

Nocturnal and a bit on the shy side, the Walking Stick grazes on leaves of forest trees and if an area is invaded by a plague of 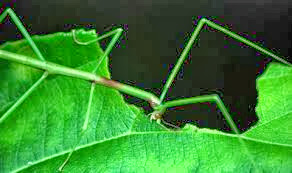 these insects, they can actually do major damage. With their incredible ability to hide themselves, these bugs have two reasons to use their camouflage – to hide and to hunt. Although their natural physical appearance aids in protecting them, Walking Sticks also 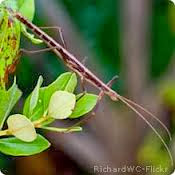 practice “behavioral camouflage.” During the day these bugs will usually be found with their front legs extended, while they keep their rear legs to the fore and aft of their body and remain either motionless or they gently sway with the breeze helping them to appear like a "real" branch or twig. Despite Mother Nature’s incredible camouflage job, many predators aren’t fooled and these bugs can be eaten by a variety of birds, rodents and mantises. Several species of Walking Sticks have added chemical warfare as a form of passive defense, squirting a highly irritating liquid into the face of a potential predator that can burn and even blind their enemies. Others will drop their legs when a predator attacks, but can re-grow the appendages, while some winged species will flash their bright color patches under the wings to confuse their predators and aid in avoiding capture.

Not known for a particularly impressive Mother instinct, the female Walking Sticks will drop their eggs randomly on the forest floor with little care as to where the eggs end up. Before you think this to be too callous, the truth is this actually works to their 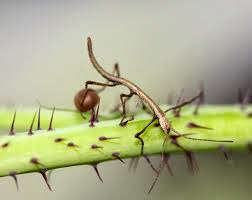 benefit, as if a predator should happen upon a batch of insect eggs, they will eat them all, but with the mother Walking Stick strategy, there is a much better chance that at least some of the young will survive. Also, because a portion of the outside of each egg is edible, some species of ants will actually carry these eggs to their nests below-ground. The ants will only nibble the exterior of the egg, leaving the rest of the egg intact, enabling the tiny insect hatchlings to exit the ant hill to begin their lifecycle. From there, the Walking Stick's metamorphosis is rather simple – the newly-hatched young resemble the finished adult product, simply growing and adding adult parts as they molt and continue to grow in size.
Formerly classified along with the Mantises genre and listed in the grasshopper Order (Orthoptera), Walking Sticks are now in their own Order, the Stick Insects or "Phasmatodea".

So if you've read this far, and are still curious about where is the bug with a chastity belt?......another interesting factoid 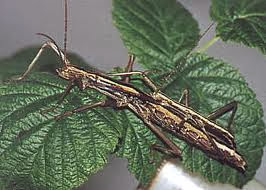 In the end, little is actually known about stick insects, making it difficult to establish the vulnerability of their status in the 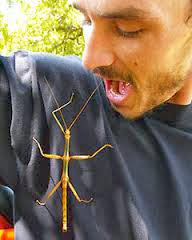 wild. The pet trade presents a potential threat, along with the popular practice of framing their carcasses, like butterflies, so if you find a Walking Stick around your Costa Rica Hotel, Vacation Rental Home, or while hiking on one of the many fun Costa Rica tours, please enjoy their unique appearance, take a few pictures to remember the encounter, but by all means move on and leave this beautiful creature to continue in its natural environment and living the life of Pura Vida! Mother Nature thanks you in advance!!

Some interesting additional Walking Stick facts:
1. Stick insects can shed and regenerate their limbs to escape attacks by predators.
Should a bird or other predator grab a stick insect's leg, the stick insect simply gives up the leg, using a special muscle to break it off at the weaker joint. Juvenile stick insects will regenerate the missing limb at the next molt. In some cases, adult stick insects can even force themselves to molt again to regenerate a lost leg.
2. Stick insects can reproduce "parthenogenetically", meaning without the need for males.
Stick insects are able to reproduce almost entirely without males. Unmated females produce eggs that will become more females. When a male actually does manage to mate with a female, there's a 50/50 chance the offspring will be male. A female stick insect can produce hundreds of all-female offspring without ever mating and there are species for which scientists have never found any males.
3. Stick insects not only look like sticks, they act like them, too.
Stick insects are named for their highly effective camouflage among the varied plants where they feed. They're typically brown, black, or green, with stick-shaped bodies that help them blend in as they perch on forest twigs and branches. Some even bear lichen-like markings to make their disguise even more effective. Stick insects often choose to imitate twigs by swaying in the wind and rocking back and forth to look more genuine.
4. Stick insect eggs resemble seeds scattered about the forest floor.
Stick insect mothers aren't known for their maternal instincts. They typically drop their eggs randomly on the forest floor, leaving the youngsters to whatever fate awaits them. However, by spreading the eggs out, the female lessens the chance that a predator will find all of her offspring and eat them. Some stick insects will actually hide their eggs sticking them to leaves or bark, or placing them in the soil in an effort to thwart the predators.
5. Nymphs usually eat their molted skin.
Once a nymph (or juvenile walking stick) has molted, it's even more vulnerable to predators until its new cuticle darkens and hardens. The castoff skin nearby is a blatant giveaway to their enemies, so the nymph will quickly consume the dried exoskeleton to remove the evidence. The stick insect nymph also gets the benefit of the protein by eating its molted skin.
6. Stick insects don't bite, but they aren't defenseless.
If threatened, a stick insect will use whatever means necessary to repel its attacker. Some will regurgitate a nasty substance that will put a bad taste in a hungry enemies mouth. Others have a reflex bleed, oozing a foul-smelling hemolymph from joints in their body. Some of the large, tropical stick insects can use their leg spines to repel the enemies, and others may even direct a chemical spray, much like tear gas, at repel the offender.
7. Stick insect eggs may attract ants, which then collect and store the eggs in their nests.
Stick insect eggs that resemble hard seeds have a special, fatty capsule called a capitulum at one end. Ants enjoy the nutritional boost provided by the capitulum, and carry the stick insect eggs back to their nests to enjoy as a meal. Once the ants finish feeding on the proteins and nutrients, they leave the eggs to one side where they continue to incubate safely away from potential predators. As the nymphs hatch, they then make their way out of the ant nest to begin their life.
8. Not all stick insects are boring brown.
Some stick insects can change color, like a chameleon, depending on the background where they reside. Stick insects may also wear bright colors on their wings, but keep these flamboyant features tucked away until needed. When a bird or other predator approaches, the stick insect will flash the vibrant wings, which serves to confuse the predator which then has trouble locating its target.
9. Stick insects can play dead.
When all else fails, why not play dead? A threatened stick insect will sometimes abruptly drop to the ground, and stay very still. This behavior, called thanatosis, can successfully discourage predators who prefer live prey. A bird or mouse may be unable to find the immobile insect that matches quite effectively into the ground, or other predators prefer living prey and will move on if they think the insect is already dead.
10. Stick insects hold the record for longest insects in the world.
In 2008, a newly discovered stick insect species from Borneo broke the record for longest insect (which had previously been held by another stick insect, Pharnacia serratipes). The Chan's megastick, Phobaeticus chain, measures an incredible 22 inches when the legs are extended, with a body length of an average 14 inches. Ew!!! 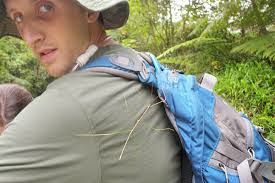 This post first appeared on Eye On Costa Rica, please read the originial post: here
People also like
How to be Happy and Positive All of the Time
Make it a September to Remember with Fall Events at the Oregon Coast
Erik Ten Hag Settles On His Front 3, No Place For Cristiano Ronaldo
Why Socotra Is Known as the ‘Galapagos of the Indian Ocean’
LYRICS: Pdot O – Holy Ghost Cry
Bug-Out Bag Lunches and Dinners for Diabetics
Five things we learned as Man United cruise in Erik Ten Hag pre-season debut
24 Two Strand Twists for Men: Coolest & Popular Trends