The 12 Storey Temple of Rishikesh

Tags: seated mata seated floorshrines mata mahadev shiva shiva
March 24th 2016
View original
Site Name: Bara Manzil Temple
Site Type: Hindu Temple
Location:  Rishikesh, Uttarakhand state, India
Highlights: 12 storey temple
Nearest Railway Station: Haridwar
Nearest Airport: Dehradun - 35 kms from Haridwar
How to reach: Well connected by road
Hotel: A lot of options including low cost and free accommodation such as ashrams
Restaurants: Varieties of options - but only vegetarian
Rishikesh is a religious town located near Haridwar on the banks of the beautiful Ganges river in Uttarakhand state of India. The town is an ancient city and has so many travel attractions such as rafting, hiking, heritage tour, temples, river, etc. Let us explore an important temple which has 12 floors.
This temple is called as Bara Manzil Temple. It is situated near the famous landmark of Rishikesh, Lakshman Jhula. Each floor has a lot of shrines where various idols are enshrined. Name any Hindu deity and you would definitely find that deity in this temple.
Let me provide the details of all the deities that are found in each floor. (I am sure you can't find this in any other site. :-)) 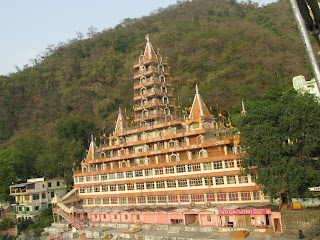 Main shrine -
Sub-shrines and other deities: 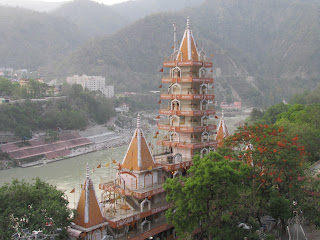 The 12 Storey Temple of Rishikesh