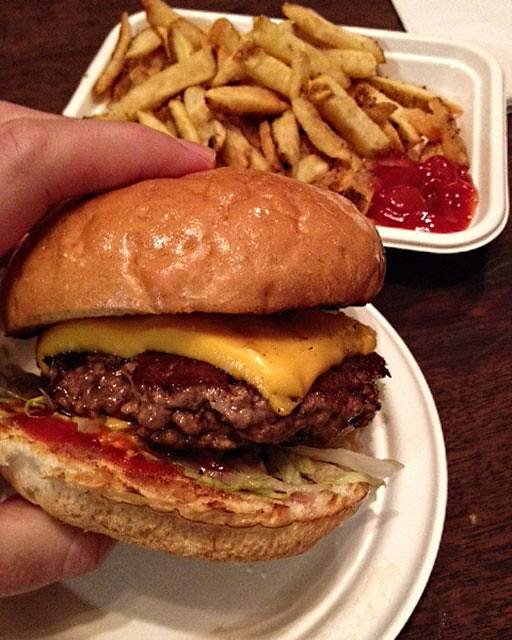 Firstly, I must apologize for the poor iPhone photos and the general lack of photos altogether. I recently found myself in meetings around London and without a proper camera. Something that doesn't happen to me often. Normally I would have just left this review for another time when I did have a camera that was larger than a business card, but Lucky Chip is a restaurant I've wanted to review for some time now.

London is getting extremely crowded with Burger Joints. They are popping up at a phenomenal rate. The U.S. chains such as Five Guys and Shake Shack have caused quite a stir and more and more people are jumping on to this cash cow, if you'll pardon the pun. In fact, Burger Joints in London are so popular now that I read somewhere Byron turns over something silly like £10m a year. That's nothing compared to the large U.S. chains, but Byron is not that old and is managing to make that kind of money in this, quickly becoming, an overcrowded market.

Lucky Chip is one of the new kids on the block, (new to me anyway). Started in a trailer in Netil Market, it now also occupies the trendy Sebright Arms pub. However, walking into the Sebright I thought I was in CBGBs in New York instead of a burger joint in Hackney. Upstairs there were bands rehearsing and the bass was echoing through the floorboards and making my Fries dance.

I opted for the Plain Cheeseburger, although it would have been prudent to try one of their Burgers with a clever name, such as: the Royale wit Cheese, or the Kevin Bacon. But, I have learned over the years that it's always best to try a Burger joint's simplest Burger. If it's good, you've got a winner on your hands. Anyone can throw a Chipotle Sauce on a Burger and top it with a Brioche Bun and it will be tasty. The real trick is to master a Plain, or Cheeseburger.

And Lucky Chip has done a good job of it. Their Cheeseburger was big and had minimal toppings; French's Mustard, Ketchup, Lettuce, Tomato and American Cheese. All lovingly placed between a thick Brioche Bun. The Burger was very tasty, but not amazing. The Fries, however, were excellent.

Whenever I eat in a new Burger Joint I always judge it by, would I go back? And the answer is, no. It's a nice Burger, with simple ingredients, but it's too far out for me to travel for it and it just wasn't good enough. Add to that I was sitting on couches that were too low for the table and far to tatty and it made for a slightly less than ideal experience. Patty and Bun and Hawksmoor still reign supreme in the fight for best Burger in London.

To view my professional food photography (which is far better than what you see above) please check out Taylor Young Photography.