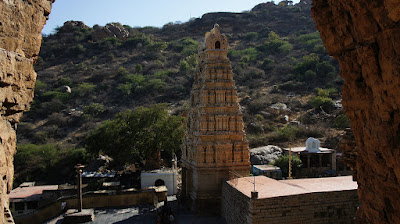 Name : Yaganti Uma Maheswara Temple
Location :
Yaganti is located in the Kurnool District in the state of Andhra Pradesh, India, approximately 100 km from the city of Kurnool and 75 kms from Tadipatri in the state of Andhra Pradesh. The temple is 14 km west of Banaganapalle (Mandal headquarters) on the Banaganapalle-Peapully road. This place is nestled in the middle of some hostile terrain like the the dry, rocky region of Erramala Hills.

Legend :
One story of the site's origin is as follows: The sage Agastya wanted to build a temple for Lord Venkateswara on this site. However, the statue that was made could not be installed as the toe nail of the idol got broken. The sage was upset over this and performed a penance for Lord Shiva. When Lord Shiva appeared, he said the place suits Shiva better as it resembles Kailash. Agastya then requested Lord Shiva to give the devotees a Parvathi Goddess as Lord Uma Maheswara in a single stone, which Lord Shiva obliged.

A second story is as follows: Chitteppa, a devotee of Lord Shiva, was worshiping Lord Shiva and Lord Shiva appeared to him as a tiger. Chitteppa understood that it was Lord Shiva in tiger form, and shouted Neganti Shivanu ne kanti (meaning: I saw Shiva I saw), and danced with joy. There is a cave called Chitteppa nearby.

Popular Beliefs :
Growing Nandi :
The devotees believe that the Nandi idol in front of the temple is continuously increasing its size. The locals say that the idol was initially much smaller than its present size. They say that certain experimentation was carried out on this idol and it was said that the type of rock out of which the idol is carved has a growing or enlarging nature associated with it. Archaeological Survey of India has confirmed that the idol increases by 1 inch in every 20 years. Experiment suggests that the rock used to make the idol exhibits a growing nature.

It is said that people used to do Pradakshinas (rounds) around it in the past. The temple staff has already removed one pillar as the size of the Nandi has increased.

According to Potuluri Veera Brahmendra swamy, the Basavanna (stone nandi) of Yaganti will come alive and shout when Kali Yuga ends. 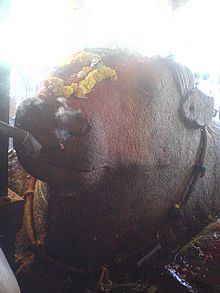 Legend has it that while the Sage Agastya was performing his penance, crows disturbed him and he cursed that the crows cannot enter the place. As the crow is the Vahana for Lord Shani, it is believed that Lord Shani cannot enter this place.

This temple was constructed by King Harihara Bukka Raya of the Sangama Dynasty of the Vijayanagara Empire in the 15th century. It was built according to Vaishnavaite traditions.

Sri Yaganti Uma Maheswara Temple is one of the few temples patronized by one of the great dynasties of India. Every year Maha Shivaratri is celebrated and a large number of devotees from all over Andhra Pradesh visit. Shiva, Parvati and Nandi are the main deities in this temple.This temple is 14 km away from Banaganipalli in kurnool dt. The saint lord Veerabrahmendra swami stayed here for some time and wrote Kalagnanam.

A feature of this temple is its Pushkarini, a small pond of water on the temple premises. Water flows into this Pushkarini from the bottom of hill through the mouth of a Nandi (bull). The water is fresh and sweet, as it comes from the hills. No one knows how the water reaches the pond all year round and this temple architecture in terms of its sculpture shows the skills of ancient Vishwakarma Sthapathis. Devotees find that a holy bath in Pushkarini is highly beneficial. After taking a bath in Pushkarini, they pay tributes to Lord Shiva. 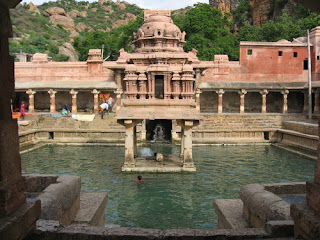 The sage Agasthya bathed in Pushkarini and worshipped Lord Shiva.

Agastya Cave :
This is the cave where Agastya performed his penance for Lord Shiva. One can enter the cave by climbing 120 steep steps. An idol to Devi is installed and may be worshipped here.

Venkateswara Cave :
The damaged idol of Lord Venkateswara is present in this cave. Compared to Agastya cave it is easy to climb though the steps are steep. According to the story this idol was present in this cave before the Tirumala Venkateswara Temple was constructed. But as the idol is damaged near the foot, it could not be worshipped. Sri Sri Potuluri Veera Brahmendra Swami tells us in his Kala Gynanam that this place can stand as an alternative to Tirupati. This temple has very beautiful scenic locations nearby.

Veera Brahmam Cave :
This is the cave where saint Sree Potuluri Veera Brahmendra swamy wrote some of his Kala Gnaanam (prophecy). The height of the cave is less and one needs to bend half over to enter it.

“The Friend Who May Not Seem a Friend…
Music Profile: Elliott Waits For No O…
‘Free Speech’ App Parler Suspended by…
You’re Not Alone; It Gets Better
How to Get a Girl to Have Sex With Yo…

This post first appeared on Hill Temples, please read the originial post: here
People also like
“The Friend Who May Not Seem a Friend” – The Cat and the Fire, Post 2 of 3
Music Profile: Elliott Waits For No One - Alternative Rock Band - Illinois, Usa | SRL Networks London Music PR
‘Free Speech’ App Parler Suspended by Google, Apple Issues the Same Warning
You’re Not Alone; It Gets Better
How to Get a Girl to Have Sex With You: 5 Tips
Dolyatra Day in India – Date, History, Importance & Celebration