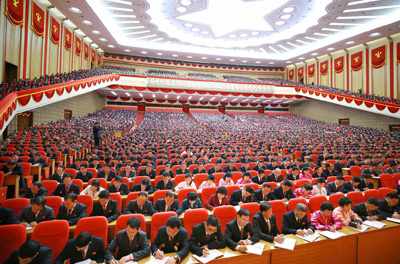 A workshop was given here for the participants in the 8th Congress of the Workers' Party of Korea (WPK) on January 13.

The workshop dealt with practical issues for the participants including the members of the newly-elected members of the Party central leadership body to deeply grasp the main idea and the main spirit of the 8th Party Congress and thoroughly implement the decision made at the congress without fail so as to achieve substantial development and progress of our revolution.

The speakers called for making devotion to the implementation of the decision made at the congress with fresh resolution, confidence and enthusiasm, saying that success or failure of the struggle line and tasks set forth at the 8th Party Congress entirely depends on how the participants make strenuous efforts with high awareness and stamina.

They stressed the need for the members of the Party central leadership body, core of our Party, to fulfill their important duties before the Party and the revolution, remembering the great political trust and expectation of General Secretary Kim Jong Un, at all times and always being aware of minds and eyes of the people and thus become genuine loyalists alleviating his heavy burden with successes in their work.

They referred to the need to faithfully support the unified leadership system of the Party Central Committee without an inch of deflection to make a positive contribution to the implementation of the Party's line and policies and the tangible development of the Party work, and make devoted efforts for the good of the people with full responsibility for the work of their sectors and units before the Party.

The workshop helped the participants keenly feel the importance of scrupulously conducting the organizational and political work, bearing in mind that the destiny of our revolution, our people and themselves depend on the implementation of the decision made at the Party Congress - organizational will of the entire Party and guidelines for thinking and action of officials and Party members.

They underlined the need for all the participants in the congress to firmly instill the idea and spirit of the Party Congress into the officials, Party members and other working people and further inspire the masses with the enthusiasm through offensive political work while working out the scientific and feasible plans for implementing the decision made at the Party Congress and closely assigning their duties to make a breakthrough in the advance in the van of the masses.

The workshop referred to the issues important for the participants in the congress in making the process of implementing the decision made at the Party Congress an important occasion in strengthening our own force with the firm viewpoint of self-reliance and self-sufficiency, thoroughly observing the principle of giving priority to the state interests and holding fast to talents and science and technology as the main strategic assets.

The speakers stressed the need for all the participants in the congress to more vigorously open up an era of fresh development, an era of our state-first principle by thoroughly implementing the decision made at the Party Congress through indefatigable and devoted efforts in the van of the advancing masses, deeply cherishing the trust, expectations and ardent wish of all the Party members and other people of the country.

The workshop helped the participants deeply understand once again the intention of the Party Central Committee to open an era of new surge, an era of drastic change in our revolution, with the noble ideals of "The people are God", "single-hearted unity" and "self-reliance" and provide the people with better and stable living conditions and environment as soon as possible.

All the participants in the workshop were full of revolutionary zeal to win a great new victory in socialist construction by remaining boundlessly loyal to the people-first principle of our Party true to the leadership of the general secretary and thoroughly implementing the programmes for struggle set forth at the 8th Congress of the Party.