While Kansas City is loaded with dive bars, the best dive bar to throw sharp objects is Chez Charlie. However, it’s not an easy dive to find.

Chez Charlie doesn’t have an exterior sign, website, or Twitter page. It doesn’t need them. Darts and cheap drinks are the draw to this Kansas City dive bar.

7 reasons I’m tired of being tired
The Neighborhood Bar that Grew Three …
The Complete List of Top 10 Cryptocur…
Who is Moon Knight? Learn more about …
MORE MASS SHOOTINGS - Brought to You …

Charlie Giloti was a tough as nails Italian lightweight boxer who opened Chez Charlie in 1968. Giloti had just finished his tour of duty in the Army.

He once picked up the tab after drinking all night with the Rat Pack. That night set him back at least a grand, according to current Chez Charlie owner Moe Mauzey. 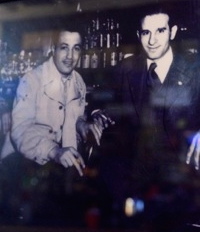 The original owner of Chez Charlie was one tough guy.

Charlie wasn’t so generous when Tony Bennett ran up a lengthy tab at Chez Charlie. Charlie asked him to sing a song, and Tony replied, “I only sing when I get paid.” Charlie grabbed Bennett’s unpaid tab and threatened to beat him to a pulp if he didn’t sing or pay his tab. Bennett’s bouncers promptly paid the tab and took Tony to another bar where he could get the golden glove, versus boxer treatment.

Female regulars like Jan Hamrich prefer Mauzey’s softer, kinder bar etiquette over tough-guy Giloti, who grew up in a generation where women only spoke when asked what time supper was. He had his rules, his ways, and a hot temper. Once a man sat down to read the paper at the Chez Charlie and Giloti ripped the paper out of his hands, saying his bar was for drinking, not reading. 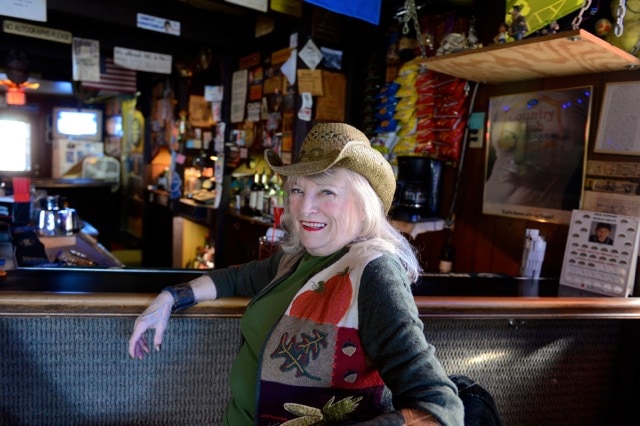 Jan Hamrich is a regular at Chez Charlie in Kansas City.

Mauzey worked as a bartender for Giloti for 26 years before he bought the joint in 2003. He called Giloti a softie under a hard exterior who would do anything to help his family and friends. He was a rock-solid guy and husband to his wife Lee for 58 years, until she passed away in 2006.

Flash forward to today. Mauzey doesn’t care what people do at Chez Charlie, as long as they don’t bother anybody else. On any given day you’ll see retirees nursing rum and cokes in the a.m., blue-collar crowds having a whiskey midday, and artists and service workers dropping for a late night Deuce for $5, which is shot of JTS Crown whiskey and Pabst Blue Ribbon beer.

Chez Charlie sells more cans of PBR a year than any other bar in the Kansas City metro. Not bad for a bar that serves no food, takes no flack, and has no exterior sign. The bulbs in the old sign used to short out. One night Mauzey flipped the switch to light up the bar sign outside.

Charlie screamed, “No, shut that off. Strangers might come in.”

So the sign you’ll see lit out front is one that says Cocktails. The regulars like their place, keeping a low profile in the city.

Don’t go to Chez Charlie’s and ignore Loretta. She’s been the bar’s bombshell ever since Charlie found her head, arms, and torso in the alley behind the bar two decades ago. Several weeks later, her legs showed up in his front lawn with some red panties hanging off one foot. It must have been some bender. 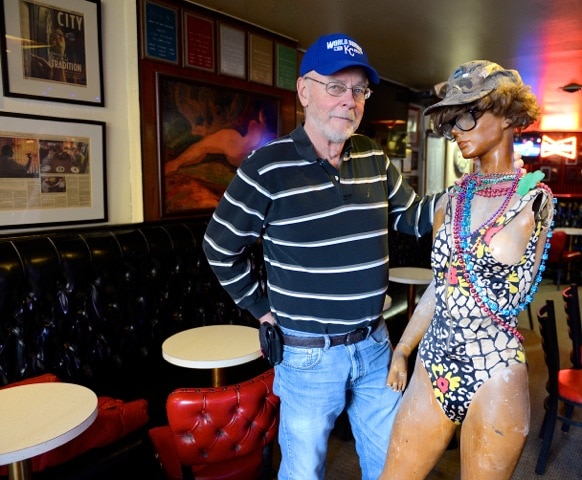 Rather than pitch the mannequin, he duct taped Loretta back together, gave her a lamp hat and cigarette, and told her to work the room. She’s been a crowd pleaser ever since and was named Best Bar Mascot by The Pitch in 2003.

The button-back booths are 30 years older than Loretta, dating back to 1952. They’re soft, drool-proof, and make you feel right at home.

If you want to play some tunes, pop some change into the 45 RPM jukebox near the back door – one of the few left in the city that hasn’t turned digital. The jukebox is filled with a wide-range of favorites dating up to 1985.

According to the 1945 City Directory, Chez Charlie was a funeral parlor prior to its dive stardom. Sigmond Freud wouldn’t find the two that different, given that liquor advertisers of the ‘50s and ‘60s used subliminal ads filled with skulls and devils to appeal to heavy drinkers. 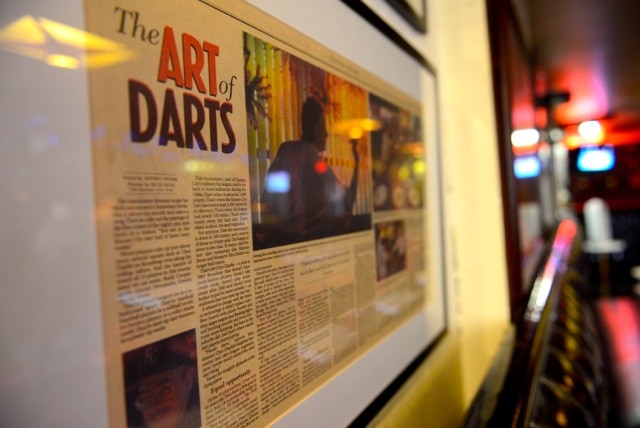 Darts are a dying sport among many except die-hard dart throwers who compete for honors at Chez Charlie.

Thursday nights are when the bar really comes to life. That’s when the steel dart players come to drink and throw down. Chez Charlie is one of the few bars left with steel vs. plastic tip darts.

The men that play at Chez Charlie consider plastic tip darts the equivalent of powder-puff football compared to tackle. It’s just not the real deal.

In the late ‘80s, the bar had 92 steel dart teams. That’s why every inch of wall space is filled with nearly 100 dart team plaques. Serious dart players call the bar Kansas City’s dart hall of fame.

Every Friday Mauzey treats his customers to a free spread. Customers help themselves to chili, tacos, hotdogs, and chips, or whatever Mauzey has brought in to share in his rode-hard crockpot and Tupperware.

If you’re late to the trough, you can enjoy the DJ on Friday night who plays ‘60s, ‘70s and ‘80s music. Or you can take a smoke break on the Smoker’s Paradise patio Mauzey added out back. Nirvana is a mental state, not a real place.

Mauzey describes his bar more like a community center with liquor. Everyone knows and likes each other, and they just roll in every week to share a round and unwind.

Thanks for keeping the crockpot on for us for the past 12 years Mr. Mauzey. Tom Bodett and Motel 6 have nothing on you and Chez Charlie.

10 Celebrities Who Live With Fibromyalgia