Too Many Midwest Bars and Restaurants Close for Good

According to data from Yelp, more than 97,997 bars and restaurants have closed for good.

Of those bars and restaurants that closed their doors, about 60,000 were local businesses or firms with fewer than five locations. About 800 small businesses did indeed file for Chapter 11 bankruptcy from mid-February to July 31, according to the American Bankruptcy Institute, and the trade group expects the 2020 total could be up 36% from last year.

Almost 13,000 restaurants close for good because of covid related hardships.

Within the heavily hit restaurant industry, food trucks and brunch & breakfast venues seem to be closing their businesses at higher rates than dinner or fine dining niche restaurants.

Of the restaurants that are closing for good, breakfast and brunch restaurants are being hit the hardest.

Too Many Kansas City’s Restaurants Close for Good

Kansas City was drunk on restaurants. Since March, nearly 500 Kansas City business have closed permanently because of Covid — most of which are restaurants.

Prior to March, Kansas City 3,600 restaurants served it all.  From Cajun to Ethiopian, soul to vegan, there wasn’t a dish you couldn’t request.

In a blink that changed.  Gatherings were shut down because of the coronavirus. We were sent home without supper. We didn’t know how good we had it and now we’re crying in our milk over our favorite restaurants that have closed for good.

From covid to curbside pickup in the blink of an eye.

In shock, we opened and closed our refrigerator and pantry doors. Stared inside at the empty shelves wondering what to make and how to cook again.

We deserved the wakeup call. We forgot that food was essential, but restaurants were not.

No more walking into restaurants without reservations, without getting dressed up, without giving up our tables for hours at a time. We were ungrateful asses who saw the $900 billion restaurant industry as a right not a privilege.

No more five-course, five-star meals out. No more asking for your check to be split six ways or discounted. No more tiramisu for you. You don’t deserve it. Nor did you deserve to dine in castles, train stations, museums, lofts, and restaurant-rich shopping districts like the Country Club Plaza and Power Light District that claims,”Any moment. Any mood. Any reason.” Not anymore.

Back in the day, each restaurant closing was followed by at least three restaurant openings. As the 32nd largest city in the United States, we didn’t deserve that many restaurants. 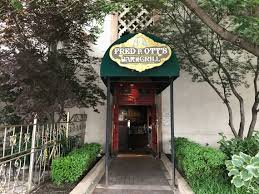 Restaurants were thinning out in 2019 when Fred P. Otts, Black Dirt, Californo’s, Hogshead, Milano Italian Restaurant, The Oliver, Krokstrom, The Sundry, and Ruby Tuesday closed. The tears you may have shed over those closings are just a warm up for the tears you’ll shed when the projected 75% of our taken-for-granted restaurants can’t or won’t open later this year.

Coffee shops are hurting, too Our Daily Nada and Blip Coffee Roasters permanently closed in March. Kansas City didn’t need a gourmet coffee shop on every block. We didn’t deserve it.

Craft beer sales are down 40% since Covid-19 started spreading.  Fill up your growlers because brewery closings will be next.

Sure, we’ve tried to hang onto normalcy by ordering takeout and giving restaurants shout outs on Instagram. Those were band-aids. The restaurant industry is hemorrhaging.

Pull out your cookbooks and pin your takeout menus by the phone charger. You’re going to be dialing more than chewing. And swallowing regrets of not tipping bigger, being kinder, and more supportive of the restaurants we had when we had ‘em.

They say what goes down, must come up. The only food staple that’s way up is yeast sales – up 601% compared to last year. People are kneading their own bread and binge baking even though we can’t live by bread alone.We need to smell pizza coming out of Il Lazzarone’s wood-fired ovens; hear Michael Garrozzo’s husky voice advertising his iconic spidini on KCUR; see Chef Michael Smith sit down with patrons at Extra Virgin; feel the crystal champagne glasses at Bluestem, or taste a marbled Kansas City strip served at Stock Hill in the West Bottoms.

Too bad. Kansas City didn’t deserve all the grub and glory it offered and that’s a hard pill to swallow.

The jagged little pill of having to eat at home indefinetly is a hard pill to swallow and deadlier still to restaurants having onto their last breathe.

As of November, here is a link to other restaurant and bar closings in Kansas City per Feast Magazine.

The post Too Many Midwest Bars and Restaurants Close for Good appeared first on Eat Drink Dive.

Too Many Midwest Bars and Restaurants Close for Good