Stop the Car for this BBQ Roadhouse

B.B.’s Lawnside BBQ is where BBQ meets the blues. The little but mighty roadhouse has been through worse times than the 2020 pandemic so stick around and hear its backstory.

Its owners, Lindsay and Jo Shannon, have been knocked nearly broke in times and worked like mad since taking ownership of BBs in 1990.

It’s Me – Chapter 12
The Trick to Always Looking Sexy for …
What Will Happen to Flash Games?
5 SEO WordPress Plugins
Step-by-Step Guide on Creating the Ul…

Their sweat equity singlehandedly transformed this former shack into sugar by luring customers to the trough with brisket and burnt ends and then giving them the ultimate roadhouse dessert – blues topped with beer.

Originally called the Silver Moon Tavern and Barbecue in the early ‘50s, this bar was erected 150 feet from the curb to remain outside of the Kansas City limits. With no laws to follow about liquor licenses or hours, Silver Moon Tavern stayed open all night.

Then the bizarre, turquoise-colored restaurant got annexed into Kansas City proper, the owner abandoned the building, and Shannon purchased the property to pursue his third career as pit master.

Shannon’s career has included selling billboard advertising and working as a blues DJ on both public and commercial radio. His KCFX 101.1 show — “The Kansas City Blues Show” — has aired for 28 years. All radio success and notoriety aside, what Shannon really wanted to do was to run a killer barbecue restaurant with Jo.

Shannon built his bar and restaurant business the same way he prepares rib tips — over slow heat and cooked with care for many long hours. He tucked enough money back in reserves to build a solid customer base during those tough first years; he slowly added music into the mix by throwing in a blues piano player one night a week, then local bands during the weekends.

Things took off. The business grew like crazy. Then in 2005, something ugly and impassable happened. The city announced a road- and bridge-construction project along 85th Street that would make customers practically have to pack-mule in to get to the bar and restaurant.

A successful neighboring business, Stroud’s, became roadkill. Stroud’s closed in December 2005 after the city bought them out and tore down their extremely popular, rickety-wood-floored restaurant, which had served pan-fried chicken for 72 years. 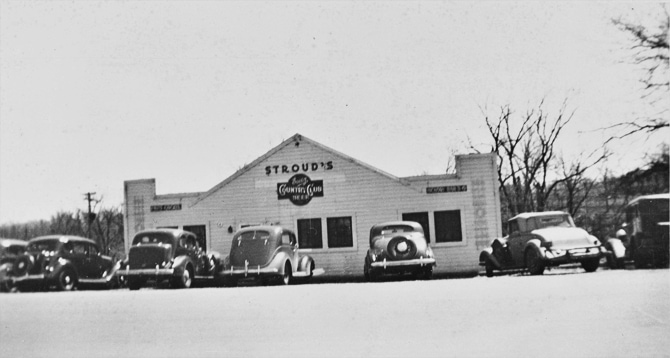 Stroud’s became roadkill December 2005 when the city bought them out and tore down the rickety building.

The widening of 85th Street from two to four lanes was supposed to take just 18 months. Project creep made the $7.7 million project cause B.B.’s business to be diverted for 2.5 years from early 2007 to the summer of 2009.

On top of losing 50 percent of its business because of the road construction, B.B.’s took another financial hit in 2008 when the smoking ban became law.

“There were times we couldn’t pay our bills,” said Shannon. “But we somehow found a way to barely hang on like the pork on a perfectly cooked rib.”

True KC barbecue sauce is not sweet. It can be tangy, peppery, sagey, firey, even tomatoey, but it is never sweet. The sweet stuff is Memphis style, according to food writer Joseph Gar from the Philadelphia Daily News.

“Kansas City has no mountains or beaches, but we’re the Barbecue Capital of the World,” says Doug Worgul, author of Thin Blue Smoke and who has eaten at BBs more than a few times. 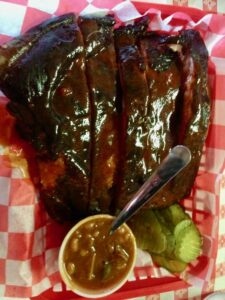 You won’t leave hungry at BBs which smokes it meat slow and serves generous slabs.

If the meat is smoked in a 60-year old pit for hours like it is at B.B’s, the sauce becomes secondary anyway. The family-style tables are draped in red-and-white checkered tablecloths. And there are a few high-tops sprinkled around the outer edge of the bar, but you better get there at least an hour or more before the music begins to park your butt anywhere near a chair. 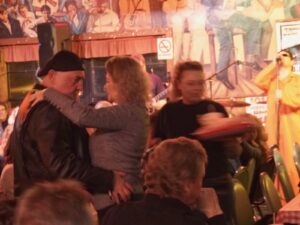 There’s no official dance floor. Blues lovers dance between tables when the mood strikes them.

B.B.’s briskets are smoked for 14 to 16 hours and the ribs for 10 to 12 hours, both over hickory with indirect heat. You can get a full slab of ribs and two sides for under $25 or a B.B’s King Combo of ribs and sausage with pit bean and fries for less than $22.

In addition to ribs, sausage, and brisket, you can get a good jambalaya for $7.50 a bowl or gumbo for $8.25 a bowl. If you want to feel like a kid again, order a Bar-B-Q sundae for $9.75. Beans, coleslaw, and brisket come layered in a Mason jar, topped with a pickle spear. 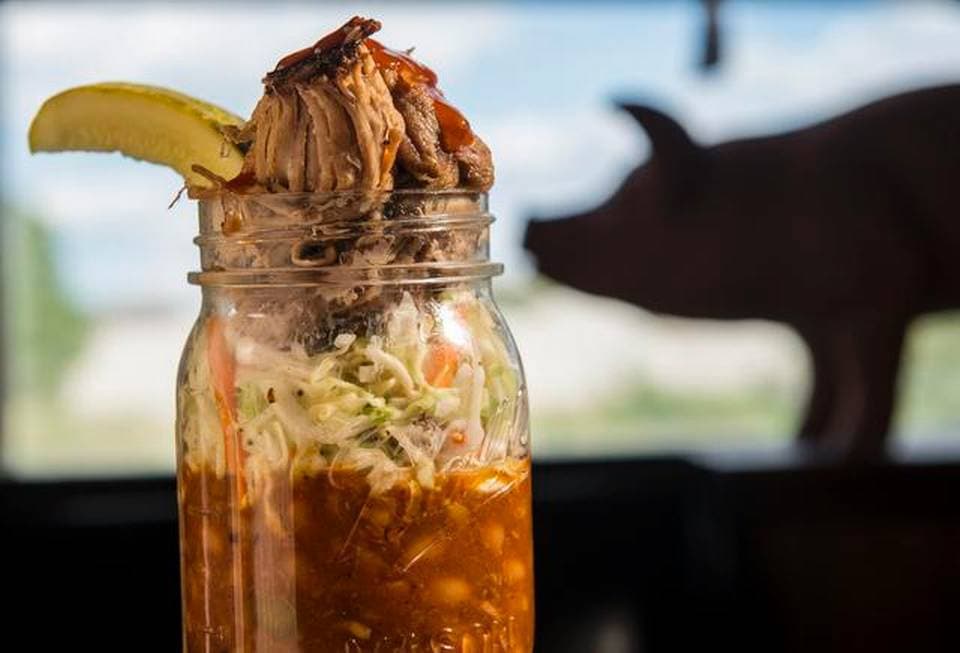 From top to bottom, this three-layered delight will satisfy any BBQ lovers craving. Hickory smoked pit beans, creamy coleslaw and succulent pulled pork — served in a mason jar and topped off with sauce and a pickle spear.

If all the fries, salt, and sauce make you thirsty (and they hope it does), B.B.’s sells buckets of PBRs for five for the price of four and Louisiana beers (Abita Amber, Turbodog, Jockamo IPA, Blackened Voodoo, and Dixie Beer).

According to Central States Beverage, B.B.’s sells more PBR by the bottle than any other bar in Kansas City.

B.B.’s headlines local, regional, and some national acts six days a week. Joe Perry from Aerosmith has played at B.B.’s with Lee McBee. Diane “Mama” Ray and 4 Fried Chickens and a Coke are regular acts. Both Amanda and Samantha Fish have played at B.B.’s, as well as the Confessors, Cross-Eyed Cat, and Trampled Under Foot. 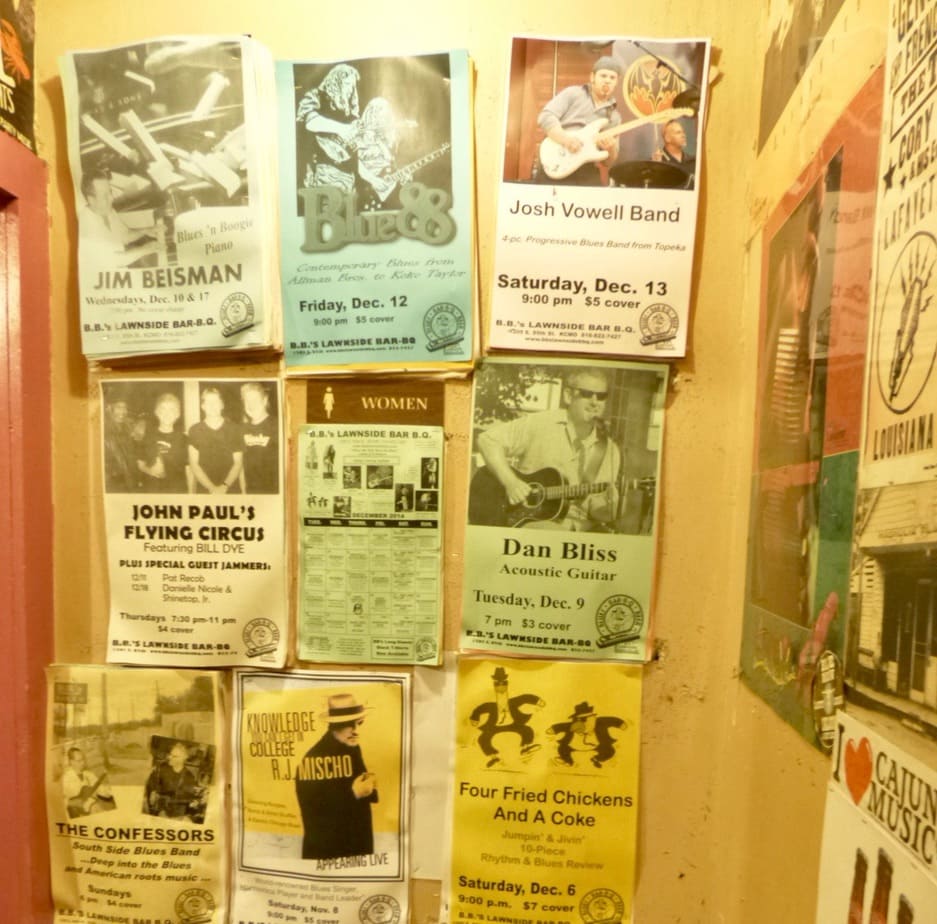 You can hear live music just about any night of the week at Kansas City’s legendary BB’s Lawnside Bar-B-Q restaurant.

“No one messes with a woman, and a basketball player can keep an eye on everything because of their height,” says Shannon.

Remember to designate a DD if you’re going to BBs.

“This place screams dive roadhouse,” says regular Janie. “And God I love everything about this place.”

The post Stop the Car for this BBQ Roadhouse appeared first on Eat Drink Dive.

Stop the Car for this BBQ Roadhouse