Carnivals across the Caribbean 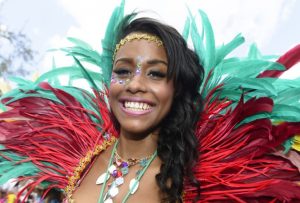 On the face of it, you might think it’s an odd time for us to be telling you about Carnivals across the Caribbean. After all, the large crowds that gather are hardly conducive to safe social distancing. But actually, if you’re keen to experience these colourful festivals for yourself, now’s the time you should be thinking about it. Accommodation is often limited and last minute flights can be expensive. So if you’re hoping to join the party in 2022, let us help you begin your research.

What and when is carnival?

The carnival tradition probably started in Italy. It spread to France and Spain, who in turn shared the custom with the places they settled, such as Trinidad, the Dominican Republic, Martinique, Haiti and Dominica. Traditionally Christians abstain from overindulgence during Lent, so the last day for a blowout feast before Ash Wednesday was dubbed Fat Tuesday, or Mardi Gras. Martinique is unusual in holding a celebration on Ash Wednesday when an effigy of King Vaval, the king of Carnival is burned on a huge bonfire.

The first modern carnival in the Caribbean is usually associated with Trinidad and Tobago, though the exact start date is far from certain. Historians suggest the Fat Tuesday masquerade parties could have been a French tradition, citing the Canboulay festivals during which landowners dressed up to imitate their slaves. After the abolition of slavery in 1834, the tables were turned, and the former slaves imitated their former masters impersonating them.

But the lighted torches carried by the revellers were a health and safety hazard. Canboulay was banned, to be superseded by J’Ouvert. As time passed, the carnival became a much larger and more inclusive affair. Music, dancing and of course those wonderful costumes with their feathered headdresses and elaborate masks made the transition. They're very much part of today’s celebrations.

Join the party in Trinidad

Extravagant costume from a carival in Trinidad

Visitors flood into Trinidad’s capital, Port of Spain for a huge event that more than holds its own against the world-renowned carnivals of Rio de Janeiro and Venice, not to mention Mardi Gras in New Orleans. On Shrove Tuesday, mas bands descend on Port of Spain for a huge parade. The spirit of carnival is one of participation – it’s not a spectator event. So though people may line the streets to watch the parade, they’ll join in, whether they planned to or not.

Preparations for next year’s carnival begin almost as soon as this year’s ends. Like Rio, it’s commercialised, of course. However, the money raised supports musicians, artists, dressmakers and other entrepreneurs, a vital injection of cash for this Caribbean economy.

A brief guide to the festivities

Local competitions dominate the run up to the main celebrations. Make sure you arrive a week beforehand to catch the Panorama competition. It's held at the Queen’s Park Savannah on the Saturday before Easter. Locals will tell you it’s the most important steel pan contest in the world and it certainly has a high profile. The following day stay put for Dimanche Gras (“Fat Sunday”). Calypso singers compete for the title of Calypso Monarch, a prestigious title that comes with a big fat wad of cash and a car.

The hours before daybreak on Monday signal J’Ouvert, pronounced Jouvay, the official start to the festivities. People referred to as Jab Jabs don their oldest clothes and cover their faces with mud, paint, chocolate, flour and anything else they can get hold of. They dance through the streets to the thumping beat of soca and calypso, hugging everyone they come into contact with and generally having a good time. It’s a 200 year old tradition which shows no sign of getting old.

The celebration reaches a crescendo on Carnival Monday and Tuesday, the biggest party in the Caribbean. Once again the soca, calypso and steel pan rhythms set the tone. Masked dancers to parade through the streets in their extravagant costumes. Look out for characters taken from the folklore and traditions of the past, such as Moko Jumbie stilt walkers, Bookmen, Burrokeets, the Jab Molassie, King Sailor and Midnight Robber, Baby Dolls and more. Each has a story to tell, so read up before you go. Haiti’s Kanaval will appeal to adventurous travellers keen to venture off the beaten track. The action kicks off in sleepy Jacmel, a port town which made its fortune on coffee. Flamboyant, raucous and above all fun, the excitement is palpable. A procession of papier mâché characters and colourful floats makes its way through the streets to the rhythm of beating drums overlaid with ear-shattering pop music.

Some revellers beat a jawe, or cowhide, probably a nod to practices carried out by the indigenous Taino population. Mathurin bat-devils dart here and there, their clacking wooden wings announcing their arrival. Meanwhile the Lanset Kod, wild figures smeared with charcoal dust and cane syrup, run amok through the crowd smearing as many people as possible with their sticky load.

A week later, the spotlight shifts to the Haitian capital Port-au-Prince, where the reprise is almost as good as the original. Two carnivals for the price of one seems a pretty good deal. It’s definitely worth hanging on for the sequel.

Junkanoo in the Bahamas

If you just can’t bear that the party’s over, there’s good news: carnival season extends beyond February. Carnival came relatively late to Jamaica but its citizens enthusiastically adopted the festival. It ends with a big bash in April to coincide with Easter. The Cayman Islands mark Batabano in May, with the celebrations centred on lively George Town.

Barbados celebrates Cropover, a harvest festival that dates back to the 17th century. Festivities begin in June and last until early August. That's when Cropover culminates with the Grand Kadooment, its name synonymous with fun and good times. St Lucia’s carnival is also a summer affair. Crowds party to a soundtrack of steel bands and calypso music and its street parades are a riot of colour.

In St Vincent and the Grenadines, Vincy Mas is the focal point of celebrations that span June and July. Grenada’s Spicemas takes place in August, as does Emancipation Festival in the British Virgin Islands. Antigua’s August carnival originated with the end of slavery in 1834 and is now a much-anticipated island-wide event. Anguilla, Saba and St Eustatius also enjoy summer carnivals.

Later in the year, residents of St Kitts and Nevis mark Sugar Mas from November to January. Meanwhile Montserrat’s carnival takes place in December. Last up are the Bahamas who, like Turks and Caicos, round off the year with Junkanoo in late December through to January. Once the pandemic is consigned to the history books there’s no excuse not to find a Caribbean carnival that fits in with your travel plans.

The post Carnivals across the Caribbean appeared first on Exploring Caribbean.

Carnivals across the Caribbean