Most tourists believe that state of Himachal Pradesh in India = Shimla + Manali. Few have thought beyond this notion and ventured to the unknown paradise named ‘Spiti Valley’. In our previous two blogs of the series ‘Surreal Spiti’, we introduced you to Spiti Valley, its location, places to visit in Spiti valley, an ideal itinerary and how you can plan your trip to Spiti Valley. As mentioned in the second blog - Plan your trip to Spiti, Spiti Valley can be reached either from Shimla-Kinnaur route or Manali route. We recommend the complete circuit route while planning a trip to Spiti Valley, i.e. reach Spiti Valley from Shimla-Kinnaur route and exit via the Manali route. So before writing about places to visit in Spiti Valley in-depth, we decided to pen down a travel guide to Kinnaur Valley. Kinnaur Valley has some beautiful hidden gems that not many travellers know about. These hidden gems of Kinnaur can be visited before proceeding to Spiti Valley or a tour to Kinnaur Valley can be planned as a stand-alone trip. This article will give you an in-depth understanding of Kinnaur valley, places to visit in Kinnaur and ideal itinerary for Kinnaur. 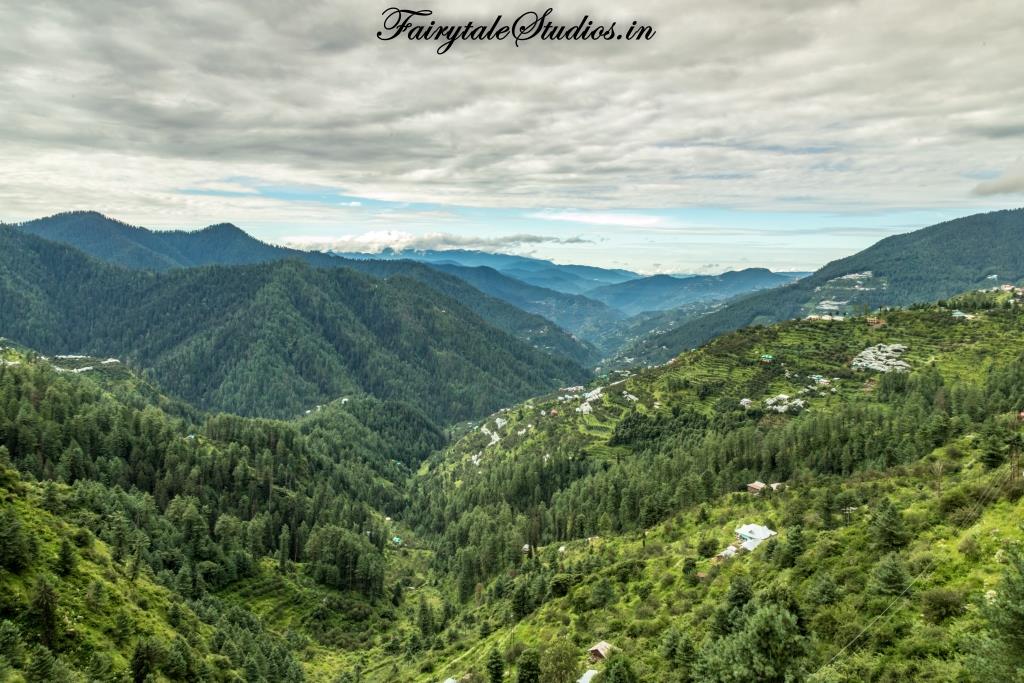 Location of Kinnaur Valley:
Kinnaur valley is located in the northeastern part of the state of Himachal Pradesh, India. It is one of the 12 districts of the state. It is considered as an offbeat location as few travellers care to visit it before moving on to Spiti Valley. Kinnaur Valley is known for its abundant apple orchards, thick forested hills and mountains, beautiful tiny settlements, and of course the ever-adventurous roads. It is surrounded by greenwood mountains, ranging in altitude from 7,610 feet to 22,360 feet. Sangla, Chitkul, Kalpa, Khab and Nako are the main attractions to visit in Kinnaur Valley. 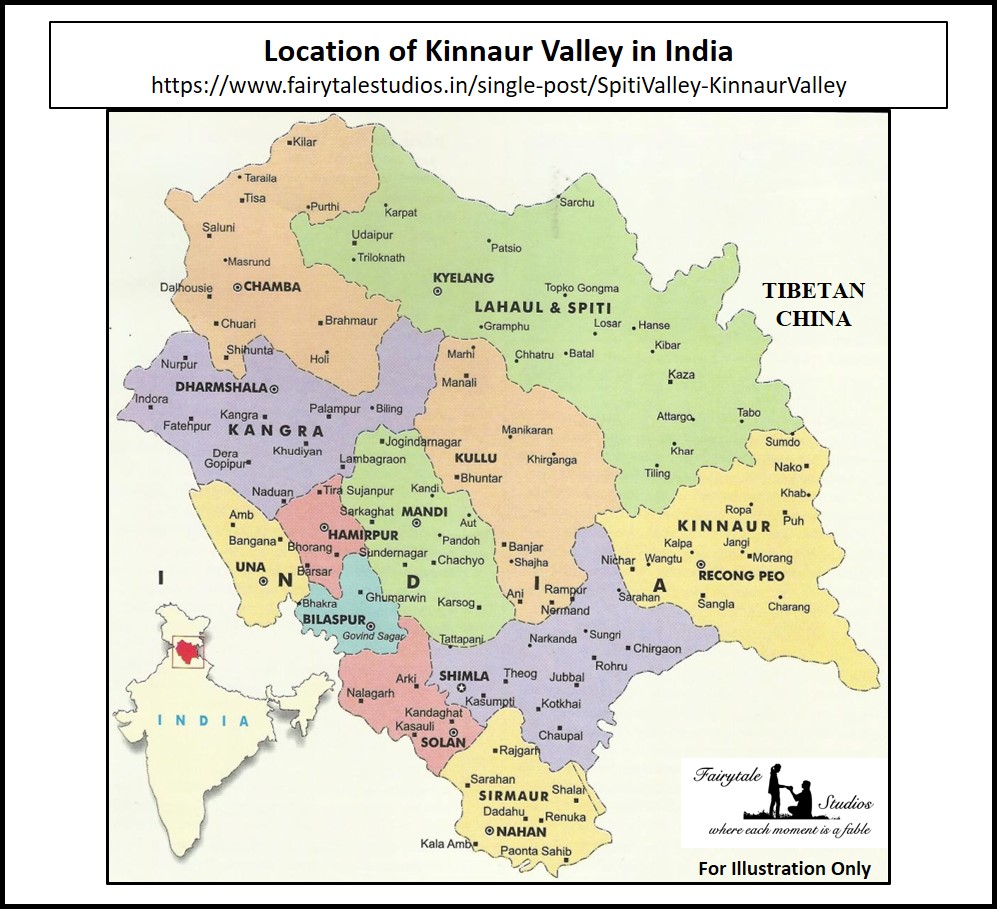 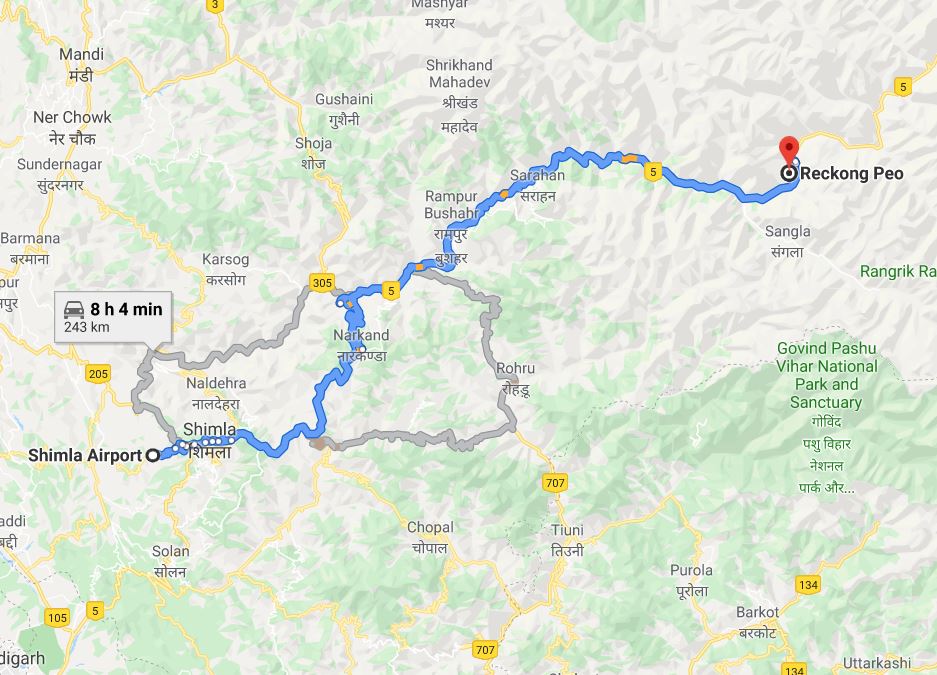 The Hindustan Tibet Highway (NH-5) from Shimla to Khab passes through Kinnaur Valley and is considered as one of the most treacherous/ deadliest roads in the world. The route to Kinnaur Valley is as follows: Shimla – Narkanda – Karcham. From Karcham, the route bifurcates where one goes to Reckong Peo and Kalpa and other goes towards Sangla and Chitkul.
Best time to visit Kinnaur Valley:
March to July and October - November are the best time to visit Kinnaur Valley. During this time, the weather is cool and pleasant and all the roads are open. October - November are colder but this is when apple orchards are harvested. August to mid-September is monsoon and road closures due to landslides can be common. December to February are peak winter months when Kinnaur Valley witnesses snowfall. Roads to Sangla and Chitkul often close down due to heavy snow and most hotels and guest houses remain closed. 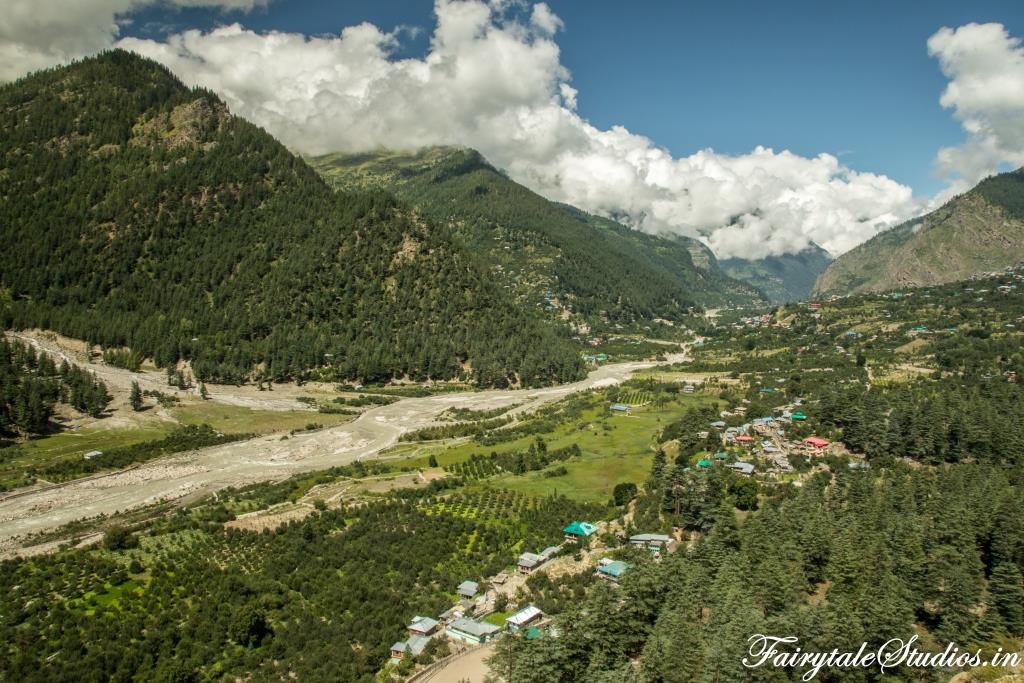 Places to visit in Kinnaur Valley:
Sangla Valley (Altitude: 8600 feet) – Sangla Valley is one of the most captivating valleys in the entire Kinnaur Valley district. It is also popularly known as Baspa Valley as it is located right on the banks of the scenic Baspa River. Sangla Valley is a major base camp for several trekking trails in the Himalayas. The valley is blessed with cedar and fir trees, red apple orchards, evergreen forests, apricots and walnuts. There is a perfect amalgamation of Hindu and Buddhist culture in Sangla Valley. In fact, the two most visited attractions – Bering Nag temple and Sangla Buddhist temple are located right opposite to each other in Sangla Valley. 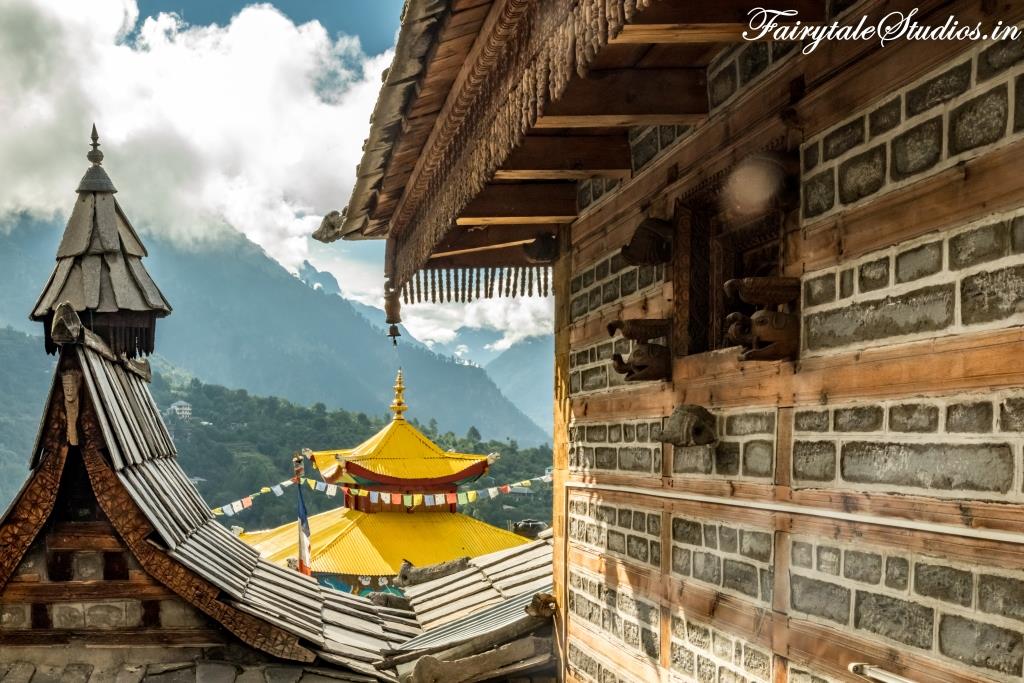 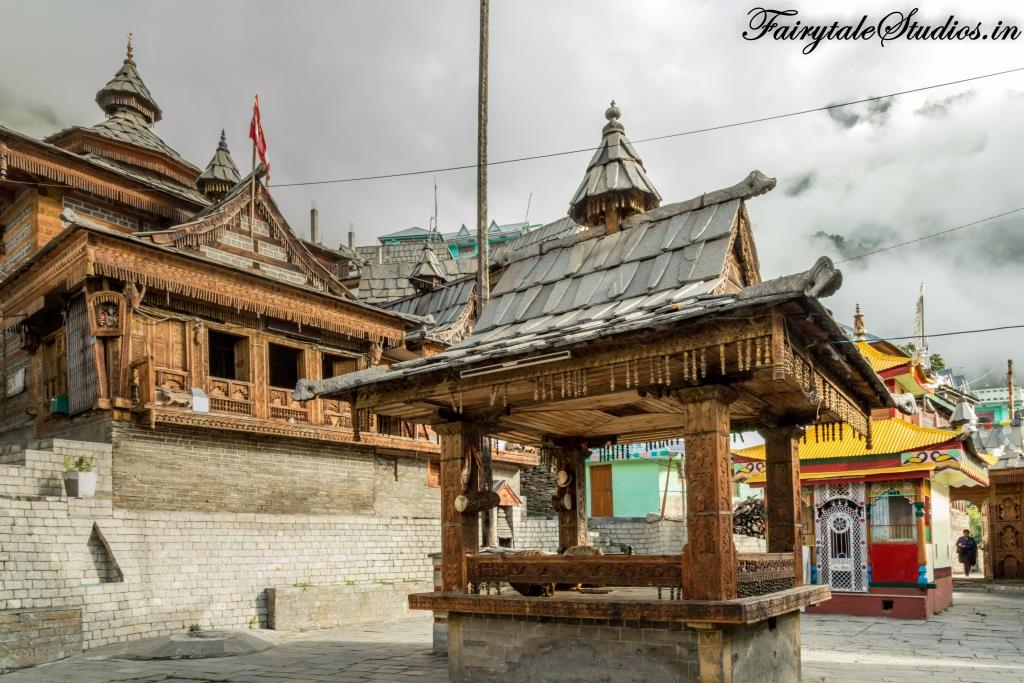 Kamru Fort is another 5-minute hike from the Bering Nag temple complex. The fort aka temple is multi-storeyed and looks like a tower. Entry inside the fort is not allowed but you can visit its courtyard and appreciate the fort from outside. The caretaker outside the fort will provide each one of you with a Himachali cap and a holy thread to tie around your waist and you are allowed entry only after wearing these. The Kamru Fort is some 1500 years old and is entirely made of wood which still remains fresh and intact. Its architecture is truly appreciable. Kamru Fort is set at a picturesque location and you will get a panoramic view of the entire Sangla Valley from the courtyard of the Kamru Fort. 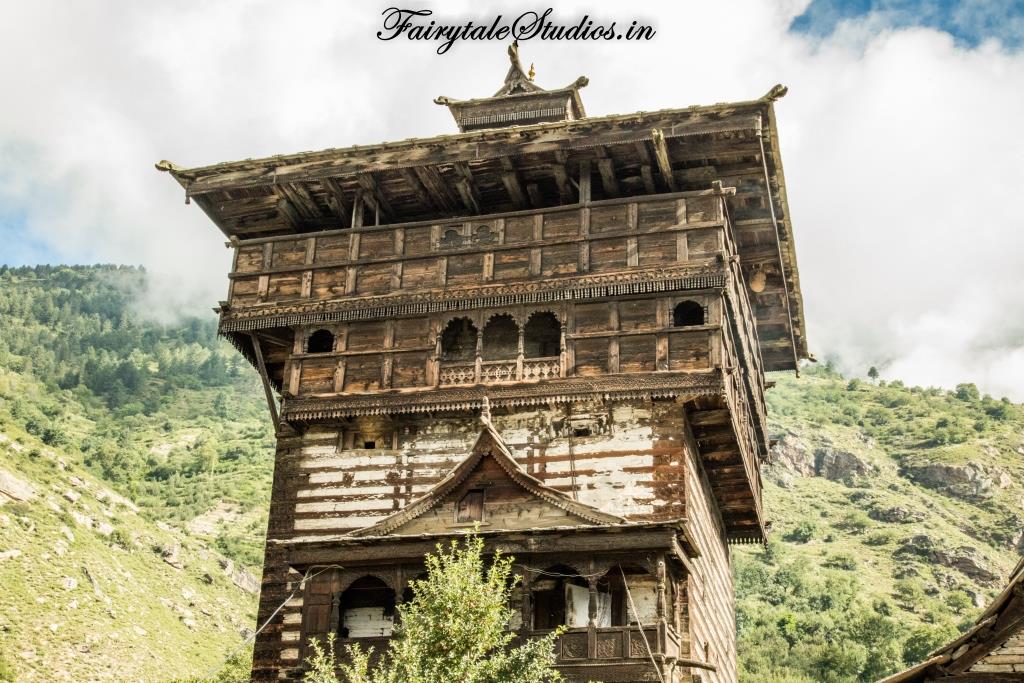 Hike to all these above-mentioned places is through Sangla village and the ascent is gradual. Do not forget to stop and admire the view every now and then during your hike. The path is filled with scenic landscapes, apple and apricot laden trees and cute Himachali houses. It is recommended you visit these places early in the morning for best scenic views. 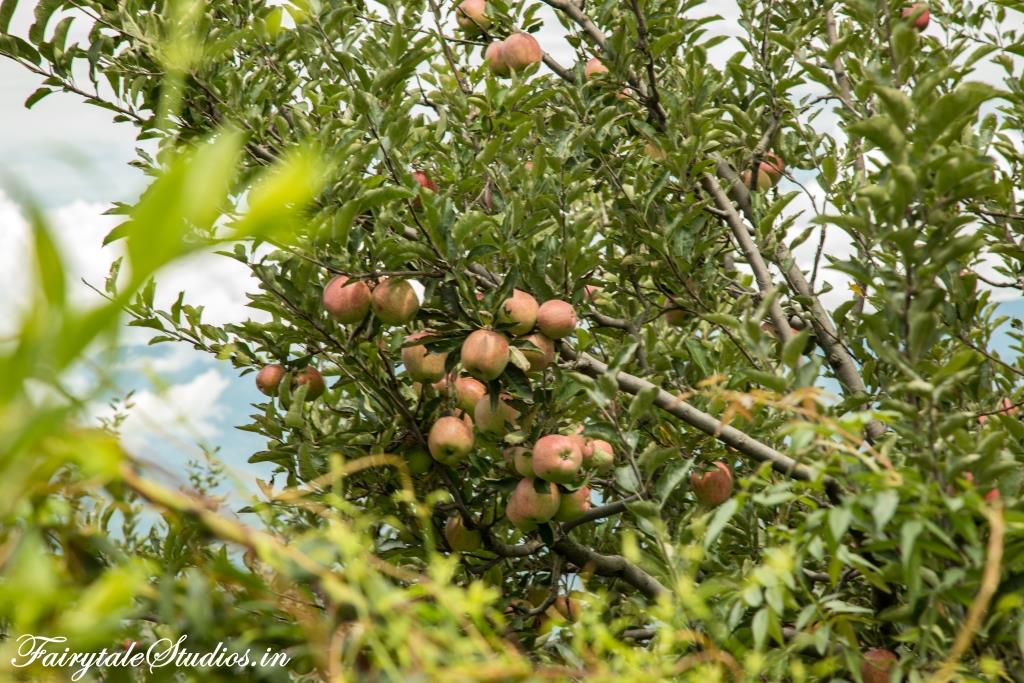 Rakcham (Altitude: 9510 feet) – Rakcham village is located on the way from Sangla to Chitkul just about 40 mins from Sangla. During our visit in August month, the fields surrounding the village were covered with striking pink-coloured flowers. We learnt that those were Buckwheat plantations. Strolling through the narrow lanes surrounded by beautiful wooden houses and storage spaces, we reached the Rakcham temple. The temple was closed but looked amazing from outside. Nevertheless, we got an opportunity to interact with kids and locals in the temple complex. We learnt from locals that Rakcham was awarded the title of best modern village by President of India in 2010 though we did not find any concrete evidence of this online. Rakcham village is a must-visit while on your way to Chitkul. It also has some homestays and camping options if one chooses to stay overnight. Spend some time here to appreciate its beauty. 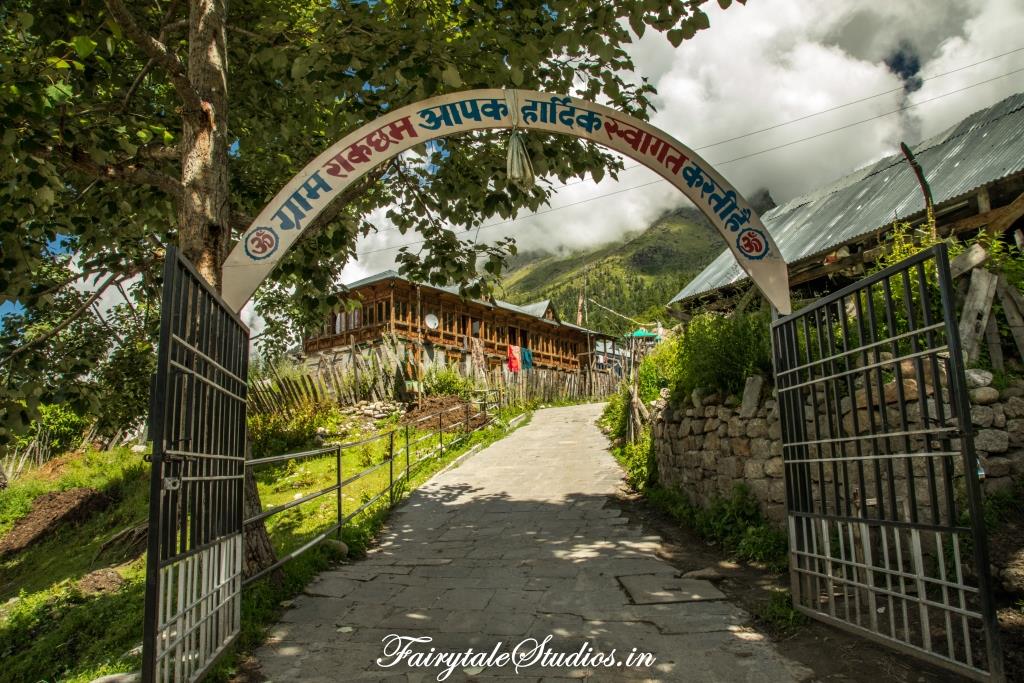 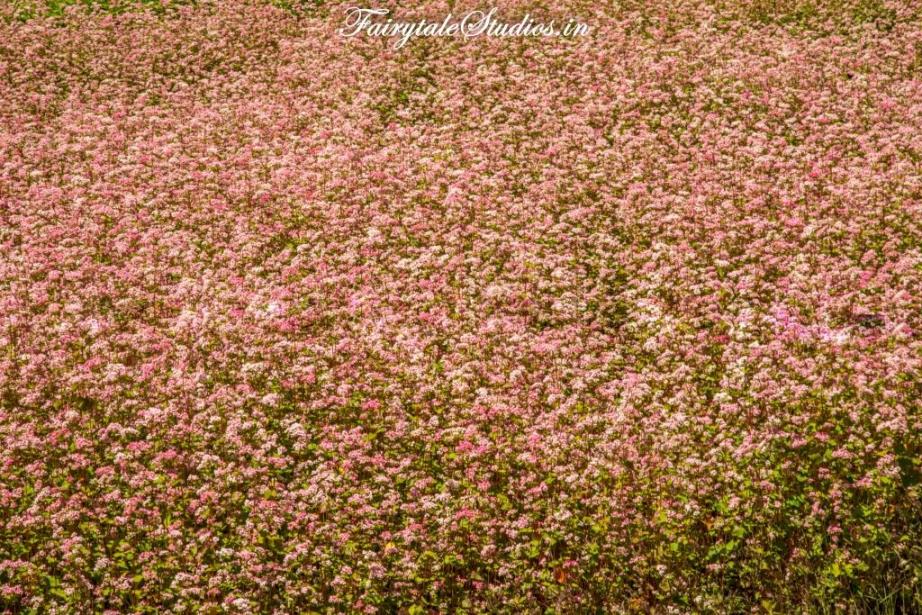 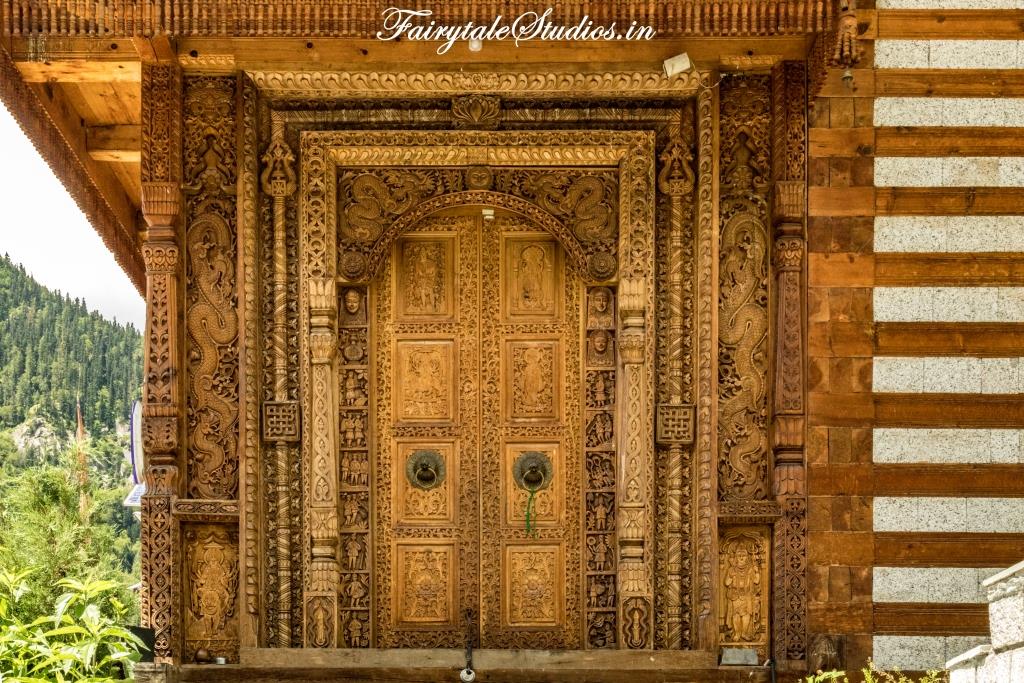 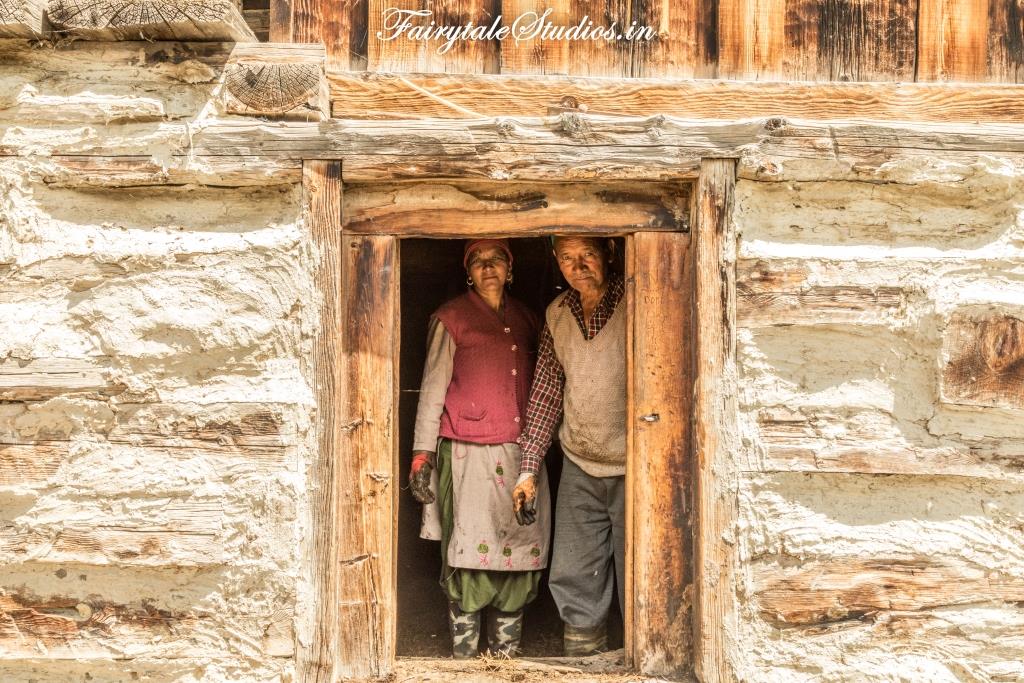 Chitkul (Altitude: 11320 feet) – Chitkul village is located at a distance of 25 odd kilometres (1 hour) from Sangla Valley. Just like Sangla Valley, Rakcham and Chitkul are also located at the banks of Baspa River. Chitkul village is called as India’s last village as it is the last inhabited village located close to the Indo-Tibet border. Without any doubt, it is the most beautiful village in Kinnaur Valley. Chitkul is a starting point to many short and long treks such as Lamkhaga Pass trek, Flag peak trek to name a few. 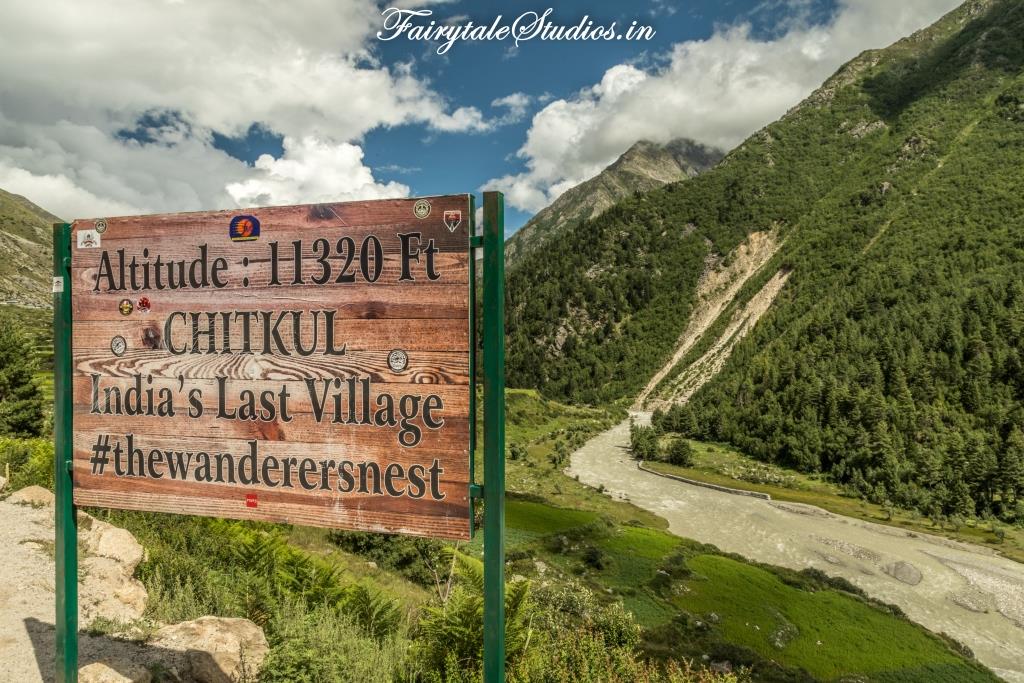 The sight of the Baspa River with spellbinding views of the Kinner Kailash mountain range in the backdrop was the highlight of our trip to Chitkul. As it is located in the Baspa basin, the soil of Chitkul is very fertile. Chitkul’s high-quality potatoes are well-known and are sold at very expensive rates in North India. 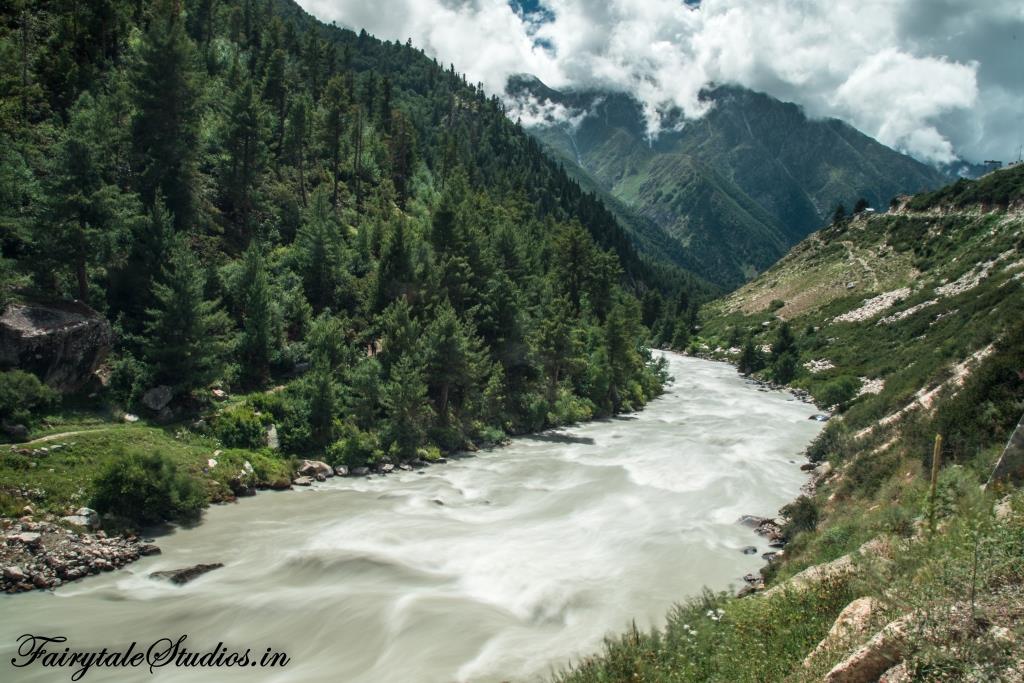 The Mathi Devi temple in Chitkul is said to be 500 years old. The temple is built in traditional Kinnauri style and is dedicated to Goddess Durga. It has a big courtyard and can accommodate a large crowd during celebrations and festivals. 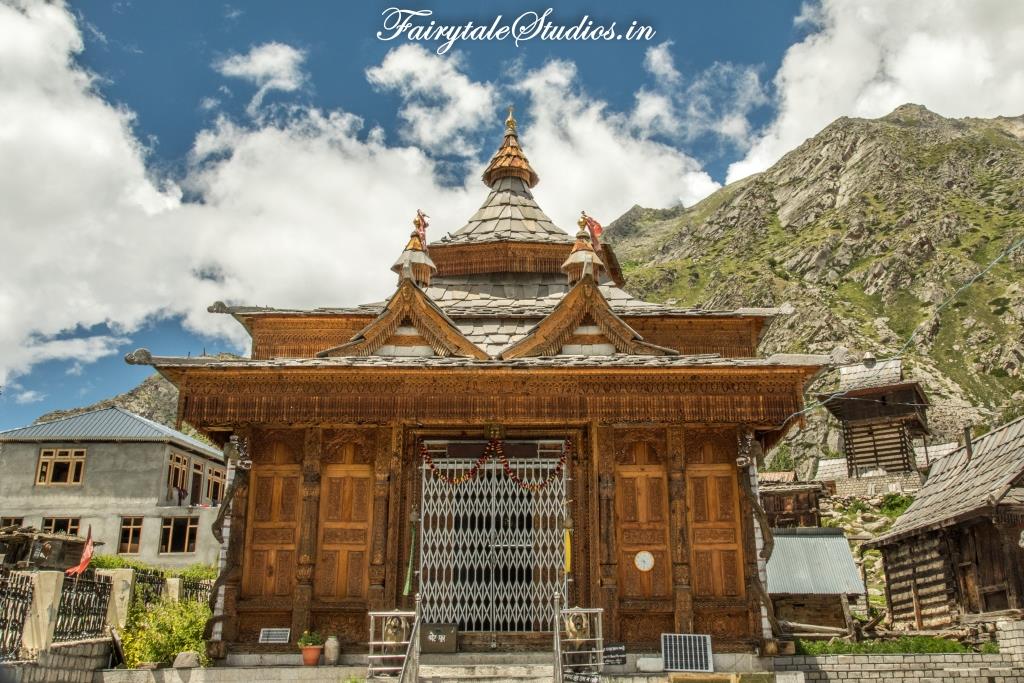 Most villagers in Chitkul live on agriculture and tourism. The walk in the village is extremely pleasing and awe-inspiring. It is perfect heaven if you seek to run away from Delhi’s or Chandigarh’s crowd for a few days. There are number of accommodation options in Chitkul from homestays, campsites to hostels. However do not expect any luxury accommodations here.
Kalpa (Altitude: 9710 feet) – Kalpa is often treated as a transit town by travellers en-route to Spiti Valley. The town, however, offers the best views of the Kinner Kailash mountain range. The Kinner mountains are visible from any point in Kalpa and hence this town is known for its spectacular sunrises and sunsets in the wake of snow-covered mountains. Do not miss visiting the suicide point in Kalpa during the evening to catch a stunning sunset. The Shiva Linga peak at 20000 feet amidst the Kinner-Kailash ranges is worshipped and held high amongst Hindus. If you have time in hand, also visit Roghi village that is located 8 kilometres from Kalpa. Roghi is well-known for the ancient Sapni fort that opens once in 7 years and is surrounded by the Himalayas. 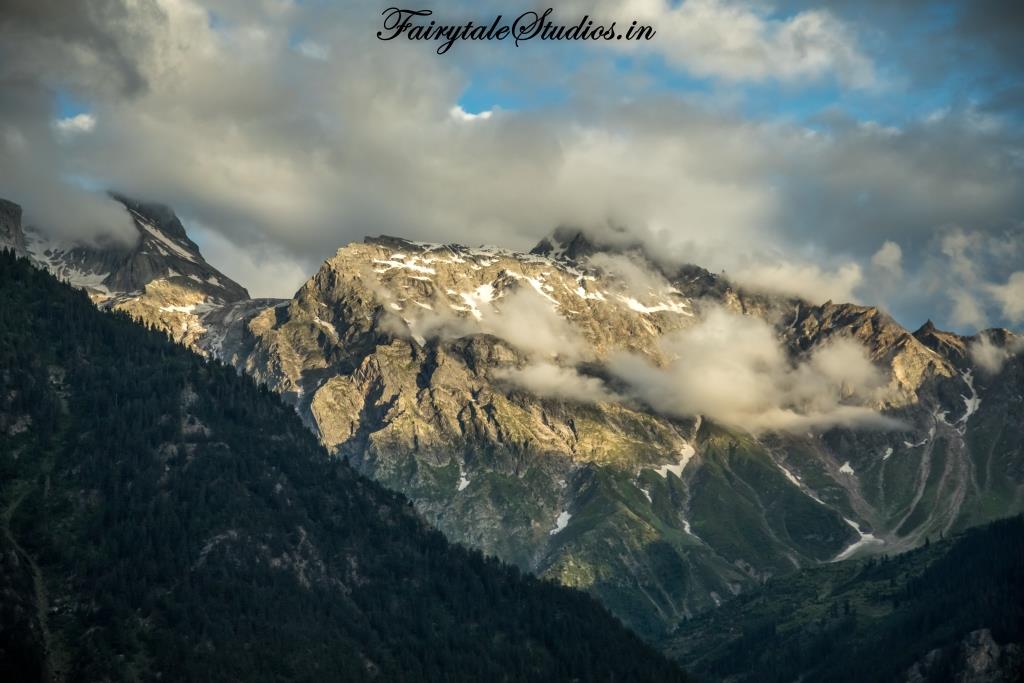 Khab (Altitude: 8000 feet) – The Hindustan Tibet Highway, referred as one of the world’s most dangerous roads, ends at Khab. Khab is basically a place where the Satluj River and Spiti River meet. A motorable bridge is constructed over the confluence of the two rivers. Just ahead of the bridge, there is a section which is carved out of the mountain with a road running through it, almost like a one wall tunnel. The NH-505 highway starts from Khab and takes one to Spiti Valley. Khab is just a 15-20-minute pit-stop to view the river confluence and photograph the surrounding before moving on to Nako. 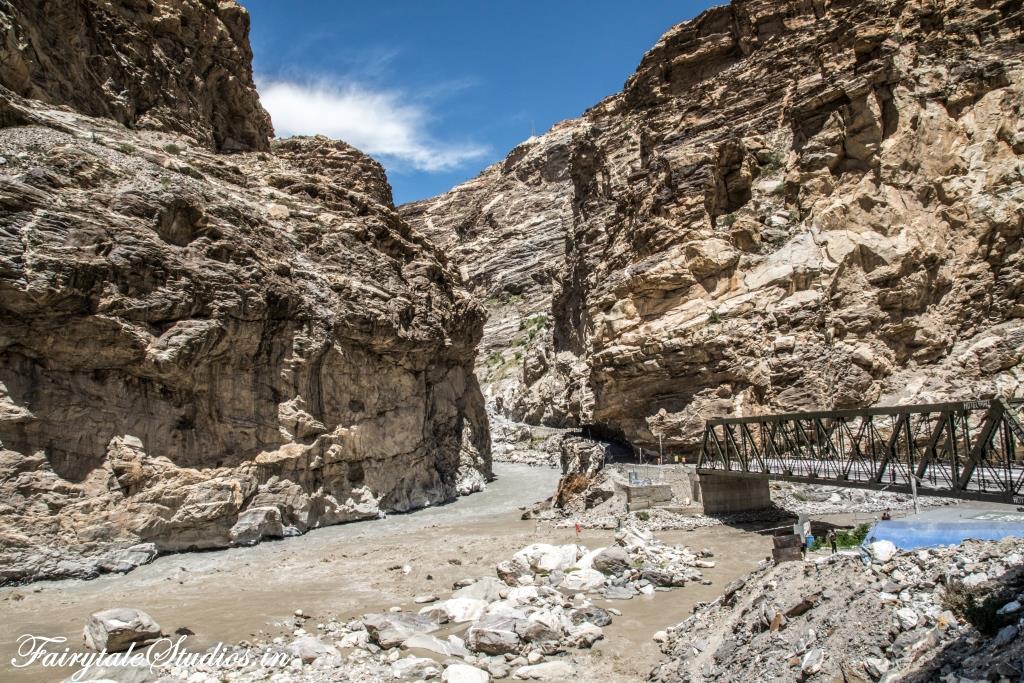 Nako (Altitude: 12010 feet) – Zig-zag roads, also known as the Kah loops (series of hairpin bends), leads one to Nako village from Khab. The ascend is almost around 3000 feet and suddenly the surroundings start changing while on this route. The mountains start becoming barren and the slopes become scree. Nako looks more a part of Spiti Valley than Kinnaur Valley but it is technically located in the latter. Nako is considered as Upper Kinnaur Valley but its landscape and topography match that of Spiti Valley. 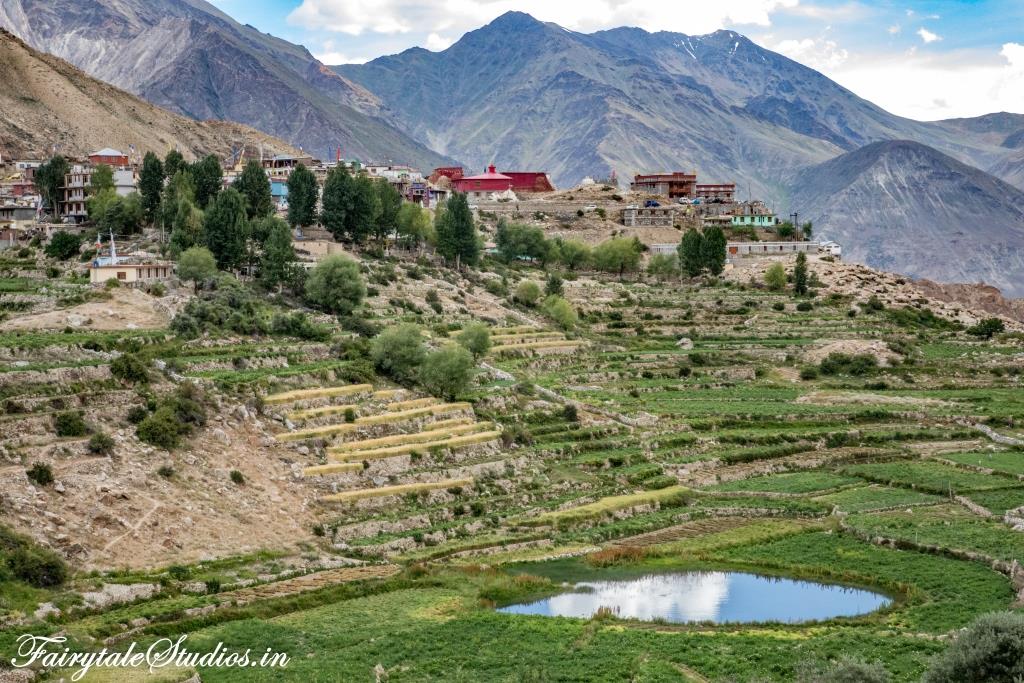 Nako Lake is a man-made lake surrounded by barren hills with willow and poplar plantation. The water in the lake is believed to change colour depending on the time of your visit. During the dawn, it looks like a pond of blue water, during day-time it turns green and by dusk you can see the water change colour to orange. There are some fully grown trees in the lake. The lake is considered extremely holy as Guru Padmasambhava (also known as 2nd Buddha) is said to have meditated here, hence no swimming or fishing is allowed inside the lake. Entire Nako village is built around Nako Lake and you will have to ask for directions to reach here as the route is through multiple narrow lanes. 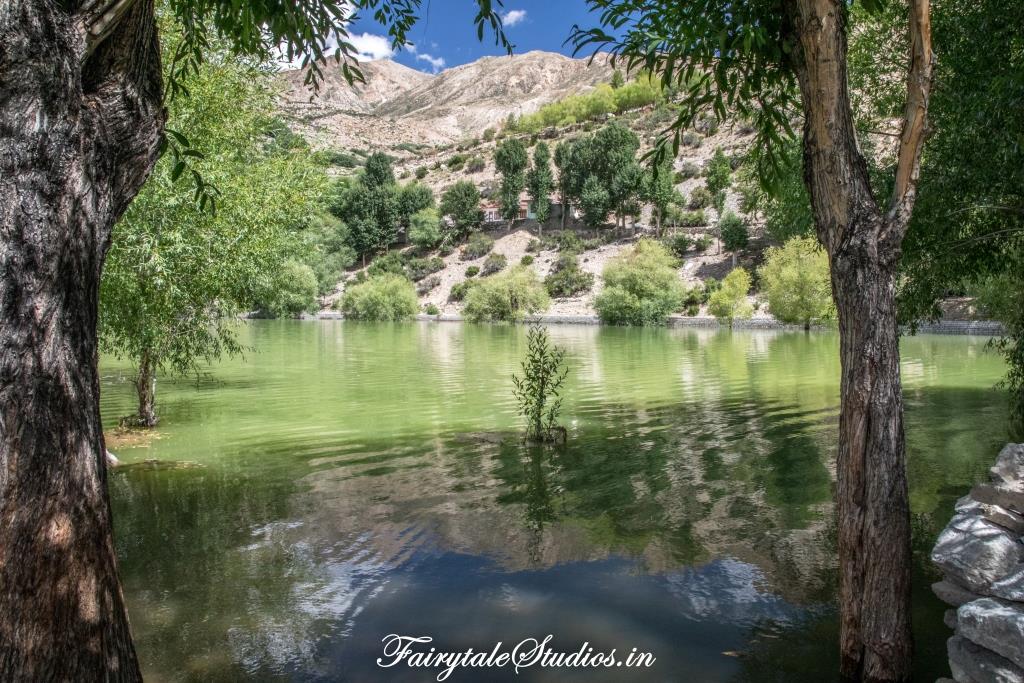 Nako monastery dates back to 11th century and is a primary attraction of the Nako village. The monastery is set in a picturesque location with a view of scenic mountains in the backdrop. The old monastery was slightly knocked down during an earthquake and hence a new one was built beside it. Both are painted with striking red colour from outside. Photography is not allowed in the old monastery but is allowed in newer one. 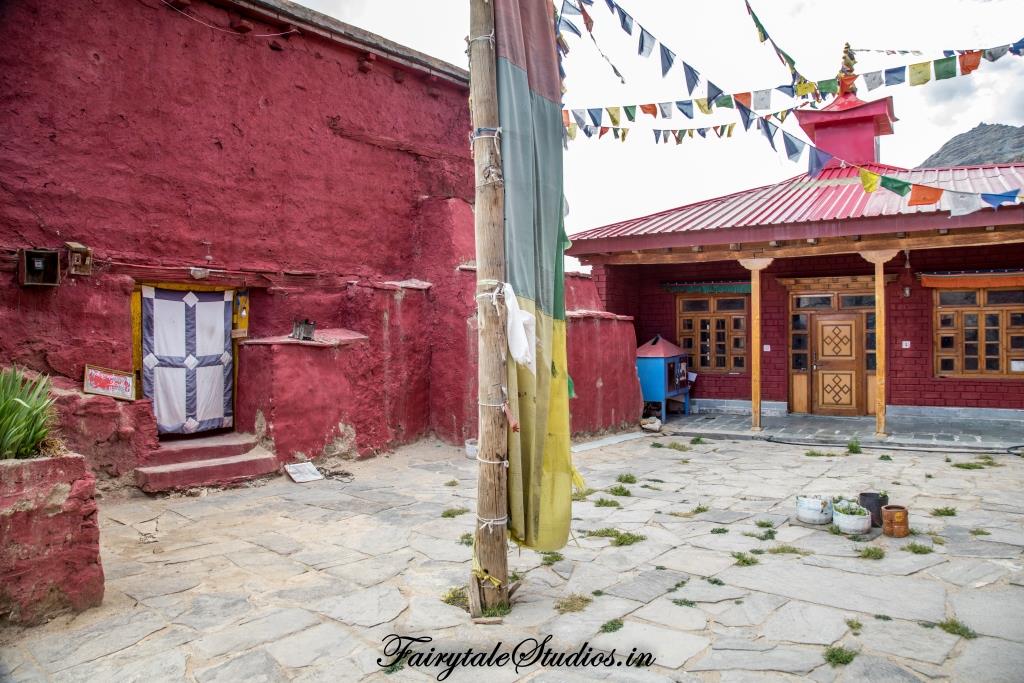 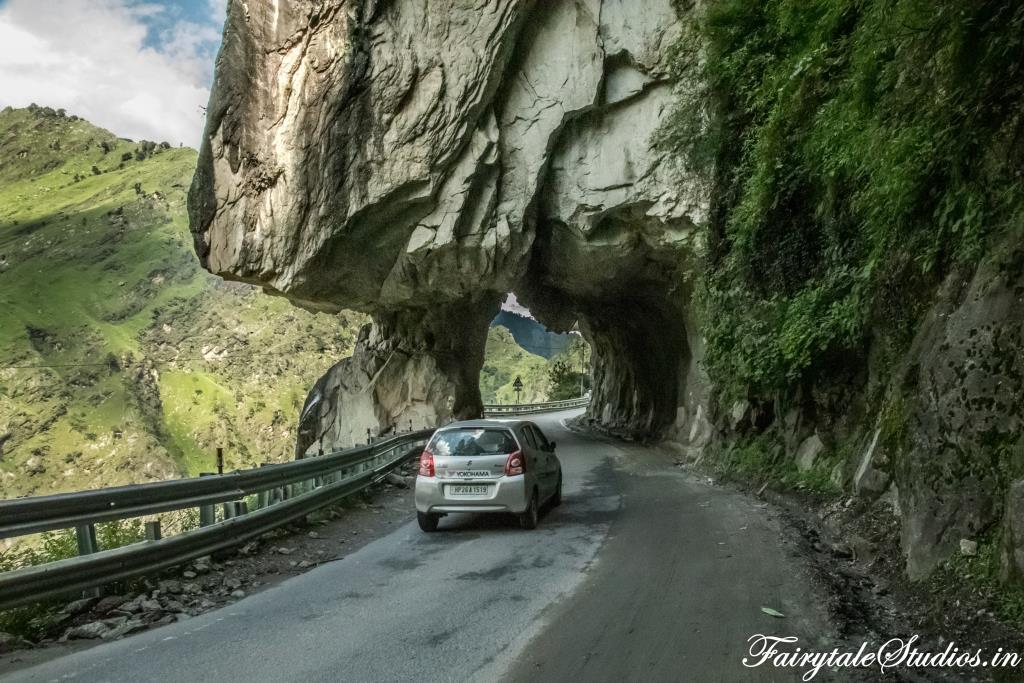 Permit requirements to visit Kinnaur Valley:
Indians, as well as foreign nationalists, do not require any permits for places to visit in Kinnaur Valley. Indians do not need a permit to visit Spiti Valley as well. However, foreigners who are interested to venture beyond Nako village to Spiti valley are required to obtain a permit. How to get those permits? Read about it in our previous blog – Plan your trip to Spiti Valley.
We hope this article covers most of the information for you to successfully plan a trip to Kinnaur Valley. If you feel we have left out any details, do let us know in the comment section below. Also, feel free to ask any queries or doubts you have about Kinnaur Valley. Adios.