Top Things to Do in Chengdu, China  China is one of the most visited countries in the world and it is on everybody’s bucket list. It is the world’s most populous country, and there is no doubt that a country as huge as China would have a rich history and hold numerous tourist attractions. China has many cities that tourists just love to visit more than once. Chengdu is one of these cities. It is the capital of Sichuan Province and one of the oldest cities that hold centuries of the history of China. Here we will explore the city’s history and top things to do in Chengdu.

There are traces that date back to people living in Chengdu as far back as 4,500 years ago, but our first understanding of the city’s history begins around 2,300 years ago. One thing that is fascinating about Chengdu’s history is the fact that its location has remained unchanged for 3,000 years. It is known that a Chinese city’s name was changed under each ruling dynasty. Chengdu, however, preserved its name for 2,300 years.

During the Qin dynasty (221–207 BC) , people who lived on the banks of the Min River were affected heavily by the annual flooding. The governor Li Bing at that time took control of that issue and built the well-known Dujiangyan Irrigation System. This irrigation system would later be considered the honor of Sichuan and provide water resources for more than 50 cities in the province.

During the Han dynasty (206 BC – 220 AD),  Chengdu was famous for being a commercial city. It was widely known for its Shu Brocade and teas, as it is known for being the birthplace of the tea culture. The Shu Brocade industry flourished in the city and an officer was appointed by the government to handle the industry in the city. The city was later named Jin Guan city. Jin Guan was the name of the officer and Jin is ‘brocade’ in Chinese, so it earned the nickname Jin City.

At the end of the Han dynasty, the Three Kingdoms period (220–280 AD) began. China was divided into three states: Shu, Wei, and Wu. Liu Bei made Chengdu the capital of the kingdom Shu and exerted so much effort to make his kingdom prosperous, making Chengdu one of the three centers in China.

After the bloody and chaotic Three Kingdoms period, Chengdu recovered quickly and became one of China’s four major commercial cities during the Tang dynasty (618–907 AD). During that period, Chengdu’s economy and culture were thriving. Agriculture, handicrafts, and printing were flourishing as well. It is believed that the earliest printing pieces could be found in Chengdu. Chengdu attracted many renowned poets such as Du Fu who lived in a thatched cottage which is now considered one of Chengdu’s tourist attractions.

Chengdu was leading the list of the most prosperous cities in China during the Song dynasty (960–1279 AD). The economy was thriving and there were specialized markets for silkworms, herbs and medicine, flowers, and much more. It was at this time that the earliest paper currency was issued in Chengdu during the Northern Song dynasty (960–1127 AD).

Top Things to Do in Chengdu 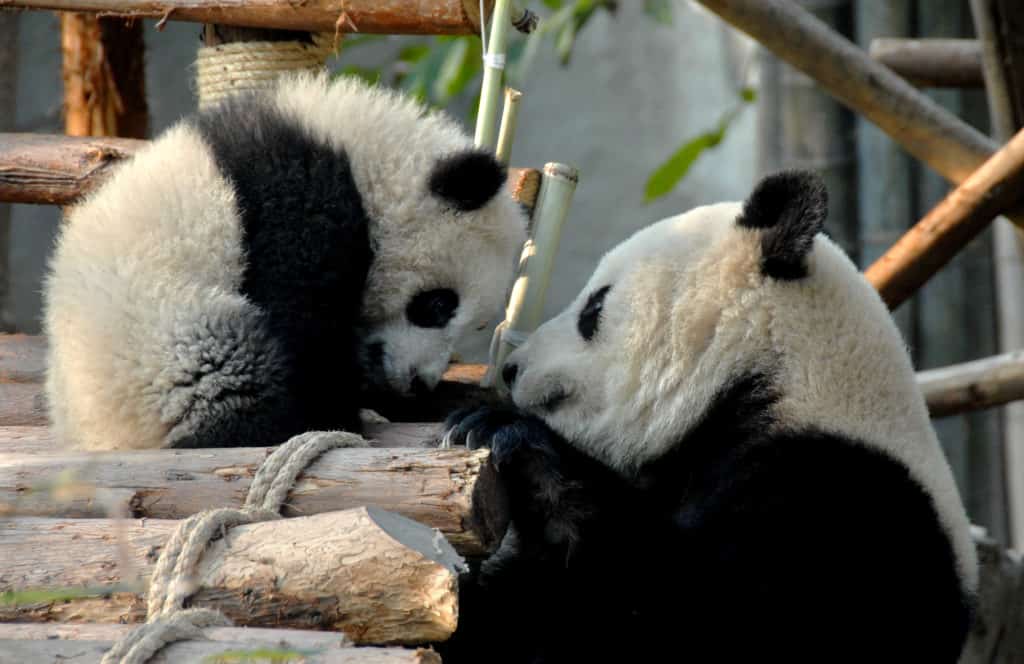 Panda mother and cub at the Chengdu Base

Have you seen videos of cute, cuddly pandas while surfing the internet and wondered where you can find them? If you pay a visit to Chengdu, you HAVE TO go watch these adorable pandas at the Chengdu Giant Panda Base. Chengdu is known for being the giant pandas’ hometown. There you will see both baby pandas and giant ones! The Base has originally taken care of six sick giant pandas in the 1980s and by the end of 2020, the population of pandas grew to 215.

The best time to visit the base is during the breakfast time for pandas from 8:30AM to 10:00. So make sure you go early to see the pandas in their liveliest state!

2- Take a Trip to Mount Emei 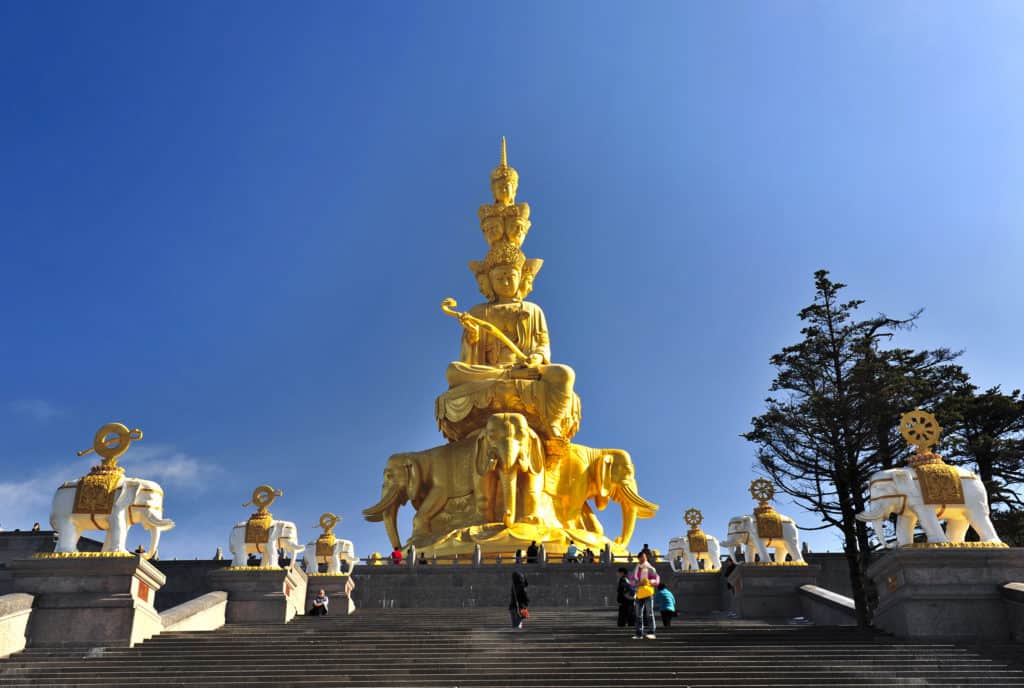 Mount Emei is a must visit destination when you’re visiting Chengdu. It is one of the Four Sacred Buddhist Mountains of China and is the location of the very first Buddhist temple built in China in the first century C.E. The mountain has numerous temples and monasteries that were built during the Tang dynasty, making Mount Emei one of the top destinations for Buddhist pilgrims. Atop Mount Emei resides the 22nd tallest statue in the world; the Bodhisattva Samantabhadra statue, or Puxian in Chinese. It is said that Puxian had meditated on Mount Emei, and this makes Mount Emei an important place for Buddhists. If you plan to climb the mountain by foot, make sure to have plenty of water for the 2 hour climb. 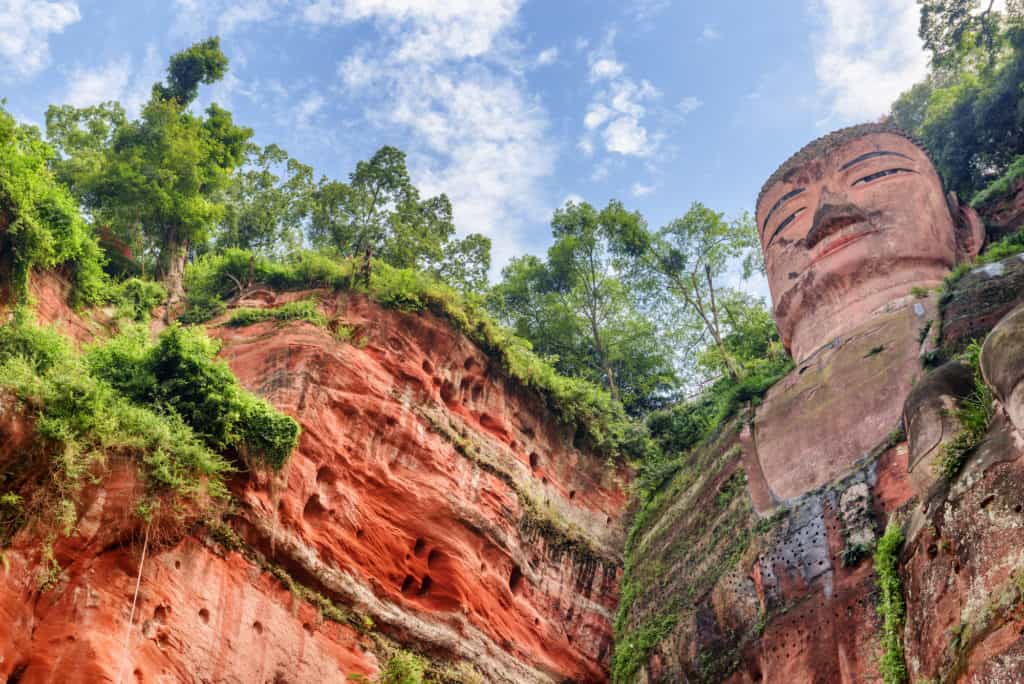 After the trip to Mount Emei, you should take the Leshan bullet train to go to one of the most important sites for Buddhists in the world, the Leshan Giant Buddha. The Giant Buddha was listed as a World Natural & Cultural Heritage Site by UNESCO in 1996, along with Mount Emei. The place holds important significance to Buddhists around the world. It is the world’s largest Buddha statue. The Giant Buddha was carved from the Lingyun Mountain, and there is a saying amongst the locals that goes: “The mountain is a Buddha and the Buddha is a mountain.” 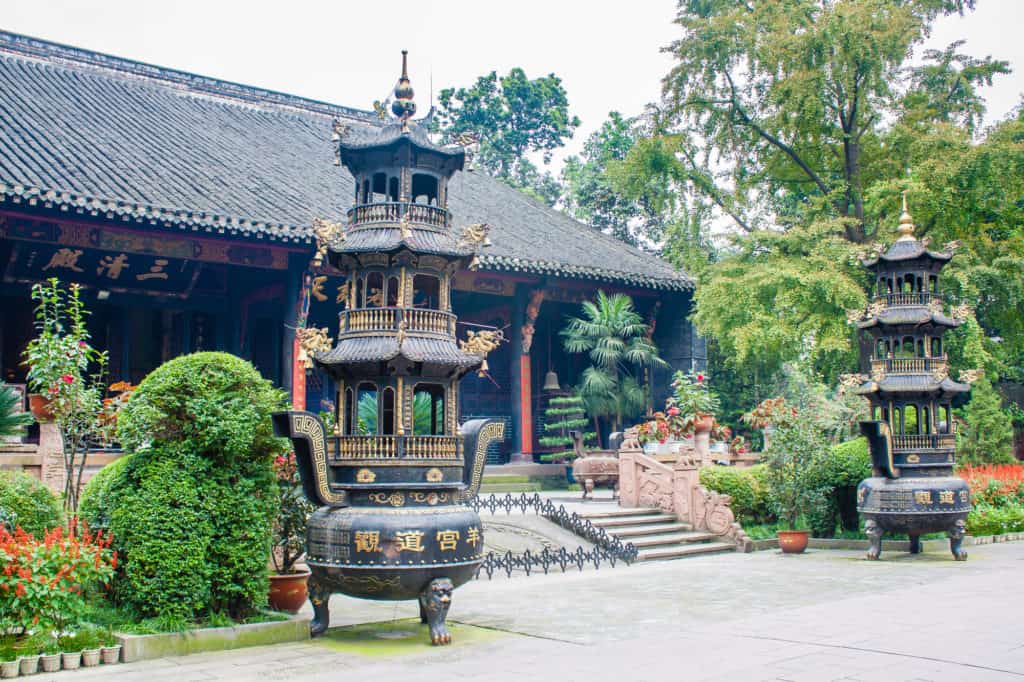 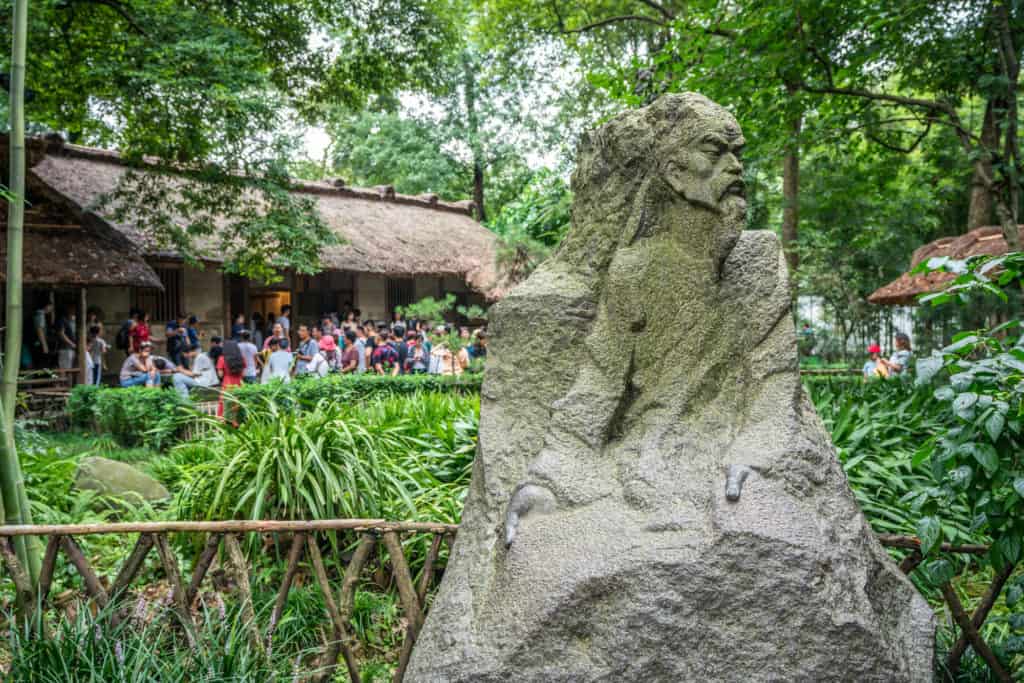 This is for all the poetry lovers. One of Chengdu’s top attractions is the cottage of the great Chinese poet Du Fu. Du Fu is considered one of China’s glorious poets of the Tang dynasty. This cottage was Du Fu’s place of refuge when the An-Shi rebellion broke out in 759 AD. At this picturesque location, Du Fun composed more than 240 poems that are considered a national treasure to this day. During your visit, you will enjoy the scenic nature and experience the atmosphere that helped Du Fu compose his greatest masterpieces. You may even be inspired to write a piece there! 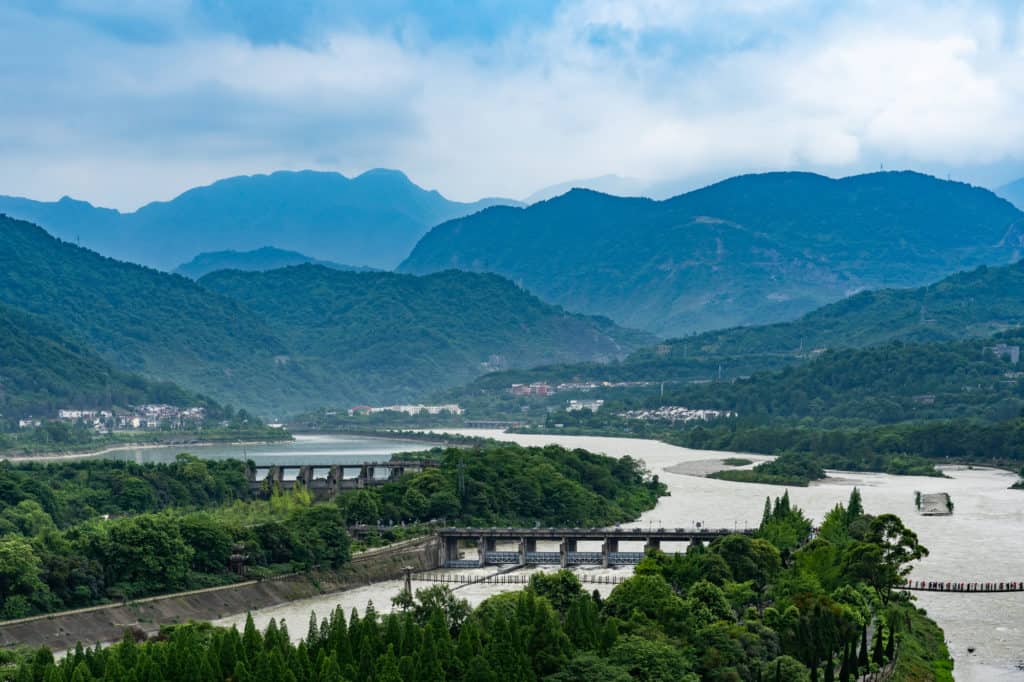 7- Spend the day at People’s Park 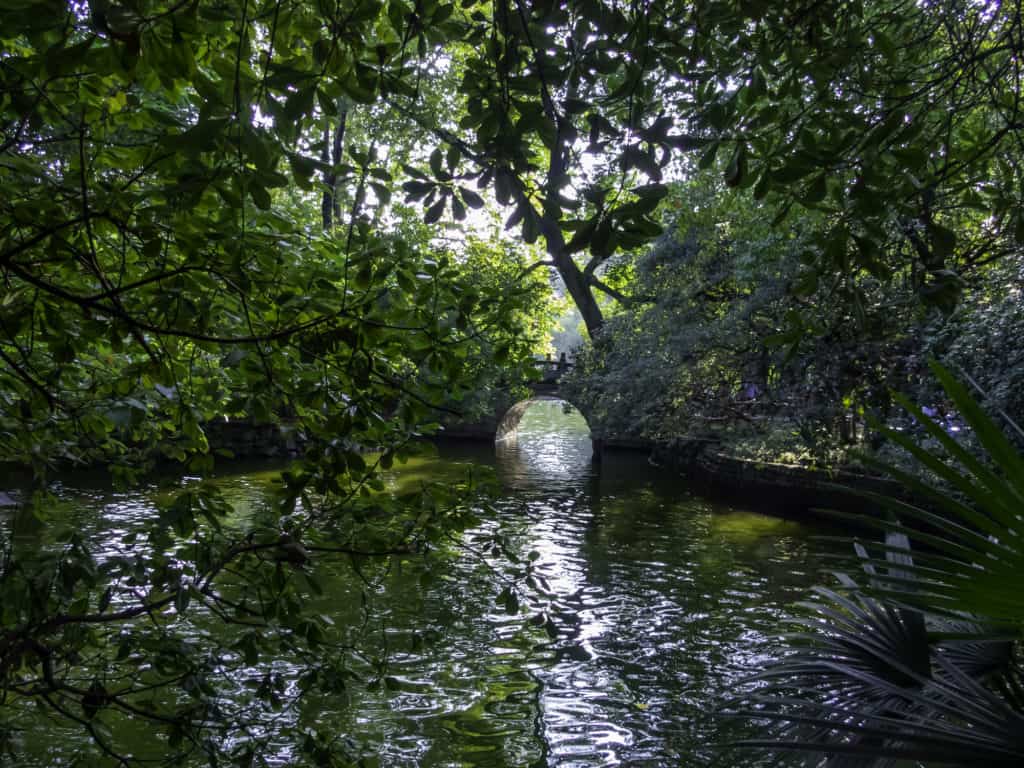 We recommend you to dedicate a day to visit the famous People’s Park. People’s Park is located in the downtown area of Chengdu. You can do more than going on a picnic there. It is a scenic park that mixes culture with nature and entertainment. You can enjoy the mesmerizing landscape while drinking tea in the teahouses like the Flower Water Teahouse in the north of the park. One of the unique things of People’s Park is flower shows. Chrysanthemum is one of the top 10 flowers in China and there is a flower show dedicated to it at People’s Park. The park is also kid-friendly as it has a children’s playground that is facilitated with many fun activities the kids could do. Your day would definitely be unforgettable at People’s Park! 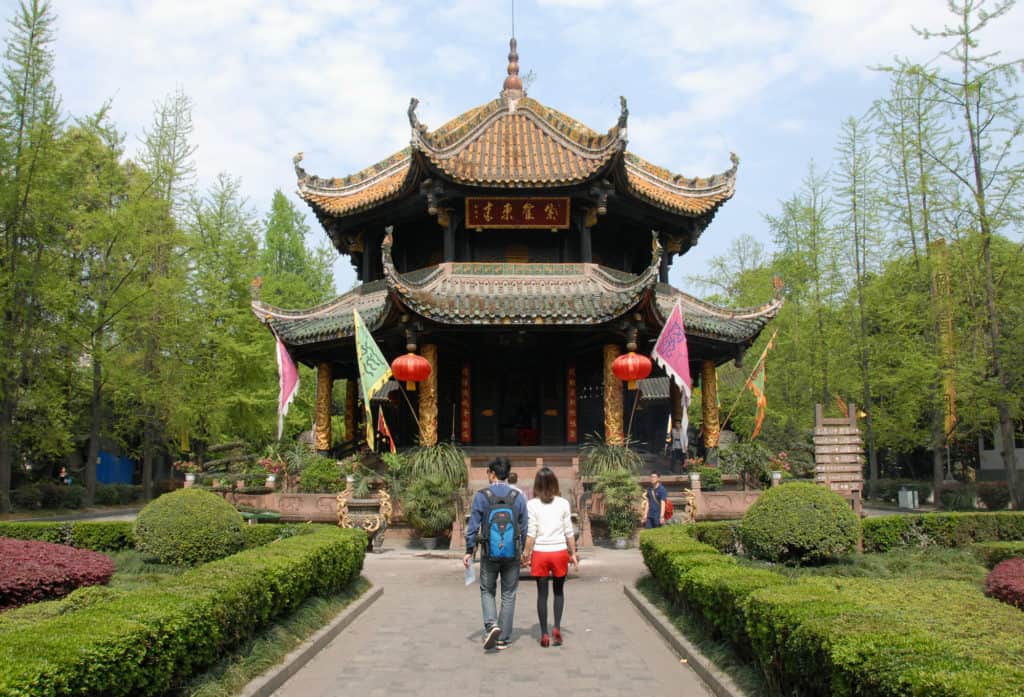 Those interested in Taoism will surely admire this place. Considered one of the most important Taoist temples, Qingyang Palace was built during the Tang dynasty when Taoism was thriving. There are multiple buildings of attraction within the Qingyang Palace and they are: Front Gate, Hunyuan Hall, Hall of Three Purities, Hall of Goddess Doumu, Hall of Jade Emperor, and Hall of Tang Emperors. Each hall is built in the Chinese Taoist style with animal-styled pillars. While moving from Hunyuan Hall to the Hall of Three Purities, make sure to stop by the Eight Trigrams Pavilion. It’s the Palace’s landmark with unique architecture and dragon-carved pillars. The palace has famous bronze goats, brought from Beijing, and it is said that they bring good luck for visitors who touch them.

China is known for its religious diversity and Chengdu is not lacking in that. Surrounded by the most famous Buddhist and Taoist temples, the Huangcheng Mosque stands right at the heart of Chengdu. The Huangcheng Mosque was built in the 16th century and rebuilt in 1858 and is considered the largest mosque in Sichuan Province. Although it was destroyed by the wars in 1917, it was rebuilt again. The mosque infuses the Chinese and Arabic architecture, making it one of the most remarkable buildings and tourist attractions. 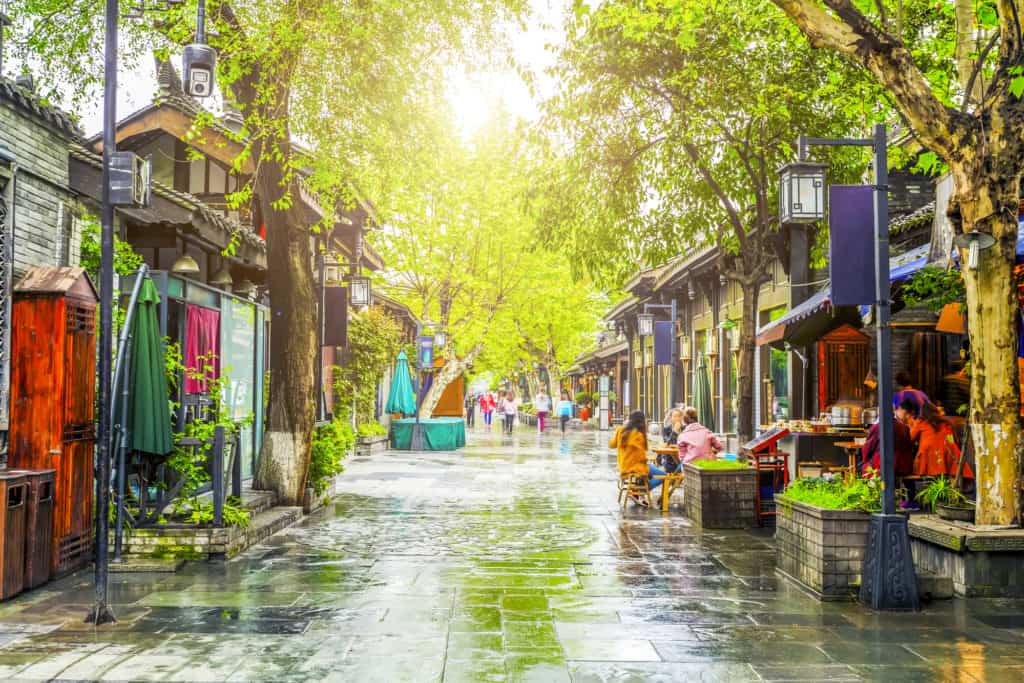 Kuanzhai Alley consists of three famous and historic alleys from the Qing dynasty: Kuan Alley (Wide Alley), Zhai Alley (Narrow Alley), and Jing Alley (Well Alley). This historic alley attracts millions of tourists as it maintains the original looks of buildings for hundreds of years. The alley shows the mingling of the old Qing lifestyle with the modern life of modern restaurants, pubs, and souvenir shops.

Another fascinating stop in Chengdu is the Jinsha Site Museum. It consists of Relics Hall, Exhibition Hall, Cultural Heritage Protection Center, and Ecological Garden. The site is an interesting one because the modern civilization intertwines with the ancient Shu civilization (Shu was the name of Sichuan Province). The Exhibition Hall has 5 parts, each exploring a part of the Shu kingdom. Hall No.1, for example, displays the ancient daily life of Shu kingdom. You can also enjoy the specially made movie Dreaming Back to Jinsha in a 4D cinema.

Things to do in Chengdu at Night 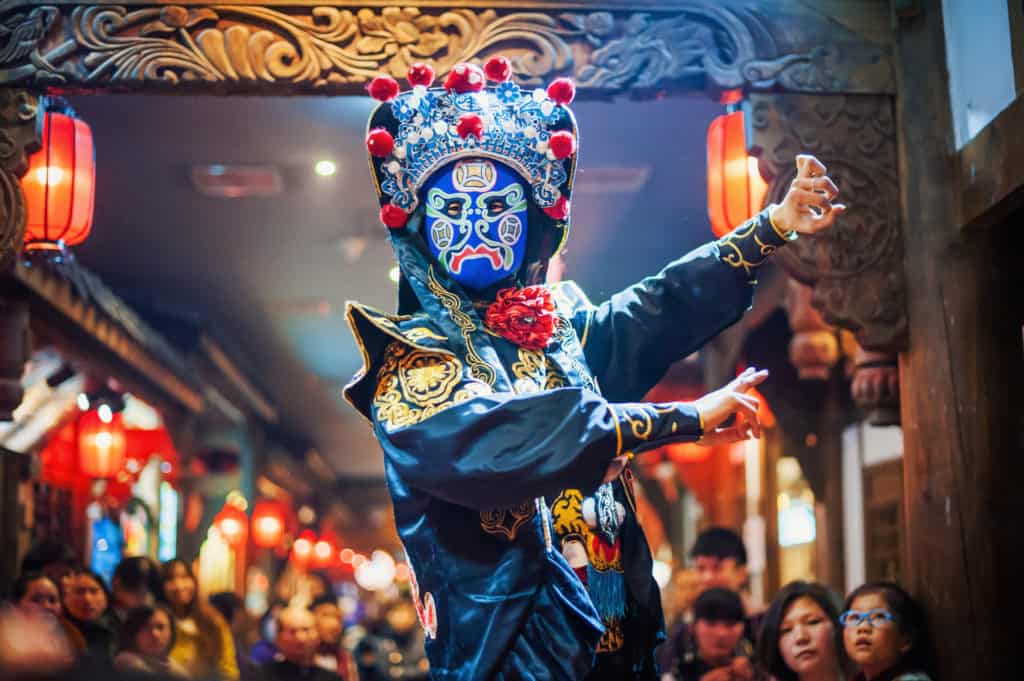 Typical Sichuan opera performances include face changing and fire spitting; these two wonders are the essence of Sichuan opera. You can see talented actors with unique costumes and colorful face paints tell stories and folktales in a dramatic way. Puppet shows are also performed to tell stories.

You can experience profound Chinese opera with many styles of performance. This daily show is a way for the Chinese people to preserve its historic culture and traditional art, and you will surely be charmed by it!

13- Have the Chengdu Taste of Hotpot 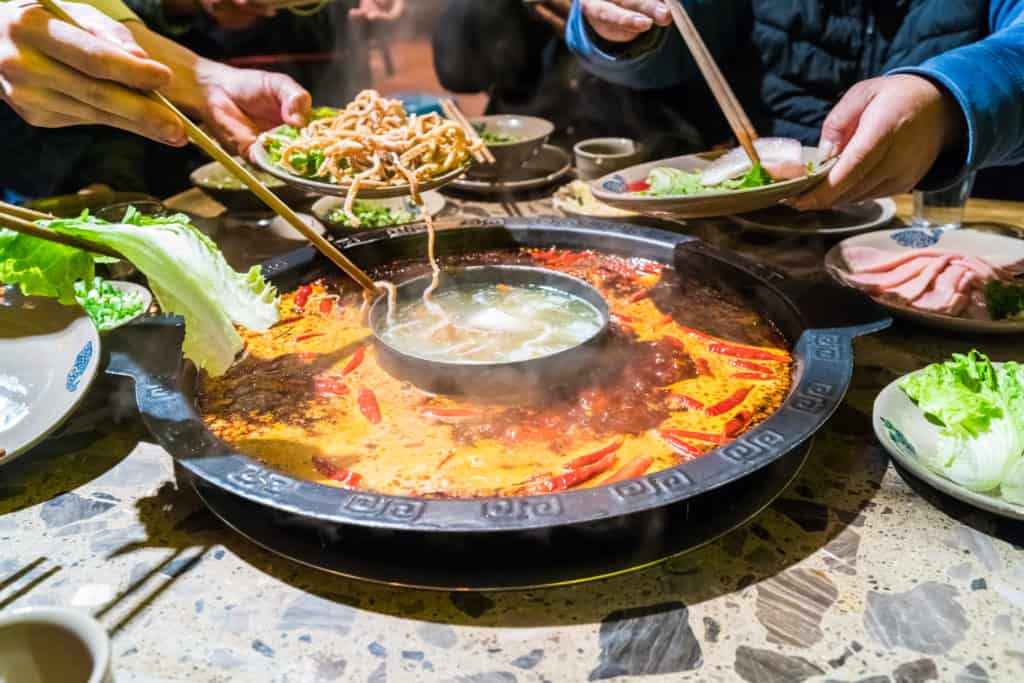 Yes, a hotpot is one of Chengdu’s tourist attractions. If you are to visit Chengdu, it’s almost mandatory for you to try hotpot. Just like the name suggests, it is a definitely hot dish that is filled with Sichuan peppers. Sichuan is known for its spicy, tongue-numbing peppers, and Chengdu is the best destination for this experience.

The hotpot experience is surely a unique one, because you get to be the chef! You select vegetables, meat, and noodles of your choice and cook them in the hot-bubbling broth. If you are unsure about the cooking time of the meat you can ask your waiter and they will surely help! There are also non-spicy options for broth if you can’t handle the spice, but we promise that once you get used to the heat you will ask for more! 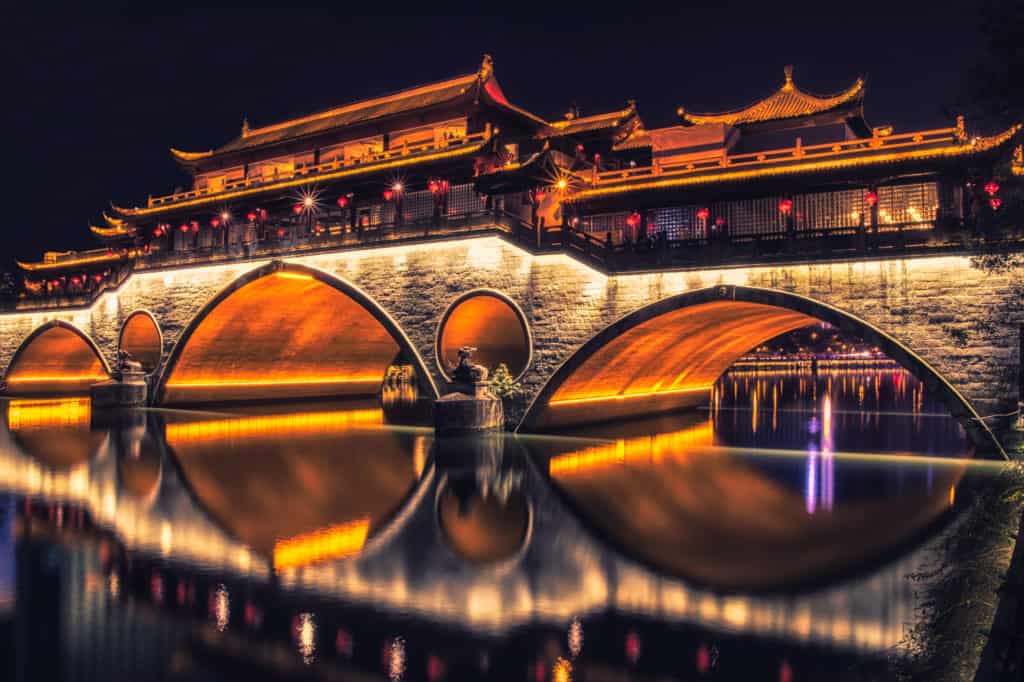 Night view of the Anshun Bridge

Literally translated as “Bridge of Peace and Propitiousness,” Anshun Bridge is one of the locations you want to experience during nighttime. The bridge was built beside Hejiang Pavilion along Funan River (Jin River). There is a lot you can do around the Anshun Bridge other than taking phenomenal pictures at night with the dazzling lights of the bridge. There are many bars, restaurants, and teahouses along the river with a relaxed atmosphere. The Anshun Bridge is a restaurant itself named the Bridge Restaurant. There, you can enjoy different types of dishes from the local cuisine.

What we have covered here doesn’t even begin to explain the real beauty of Chengdu. It’s a lively city and you can do a lot of different, fun activities every day of your stay.

Top Things to Do in Chengdu, China