Are you in Paris’ 1st arrondissement and looking to enjoy architecture and shopping together? La Samaritaine Department Store offers you just that. With its Art Nouveau façade and interesting internal design, some argue it must be listed as a historical landmark and not a shopping center.

In this article, we will talk about La Samaritaine, a tad bit about its history, what you can do there and nearby, where to stay close to it and where you can get a bite.

History of the La Samaritaine

This massive department store building was once the small dream-store of Ernest Cognacq and Marie-Louise Jay, which they named Magasin 1. Ernet and Marie-Louise met in 1871 when he hired her as his sales assistant, they were married the following year.

The couple worked hard and saved enough money to buy the building in which they worked, now known as La Samaritaine. Their success in buying all the shops around them was due to some of the policies they adopted, such as letting customers try clothes on before buying them.

As business began to boom, in 1891 the owners commissioned architect Frantz Jourdain, a prominent figure in the iron-work architectural and Art Nouveau style, to take charge of the expansion and remodeling of the shops, then called Magasin 1. 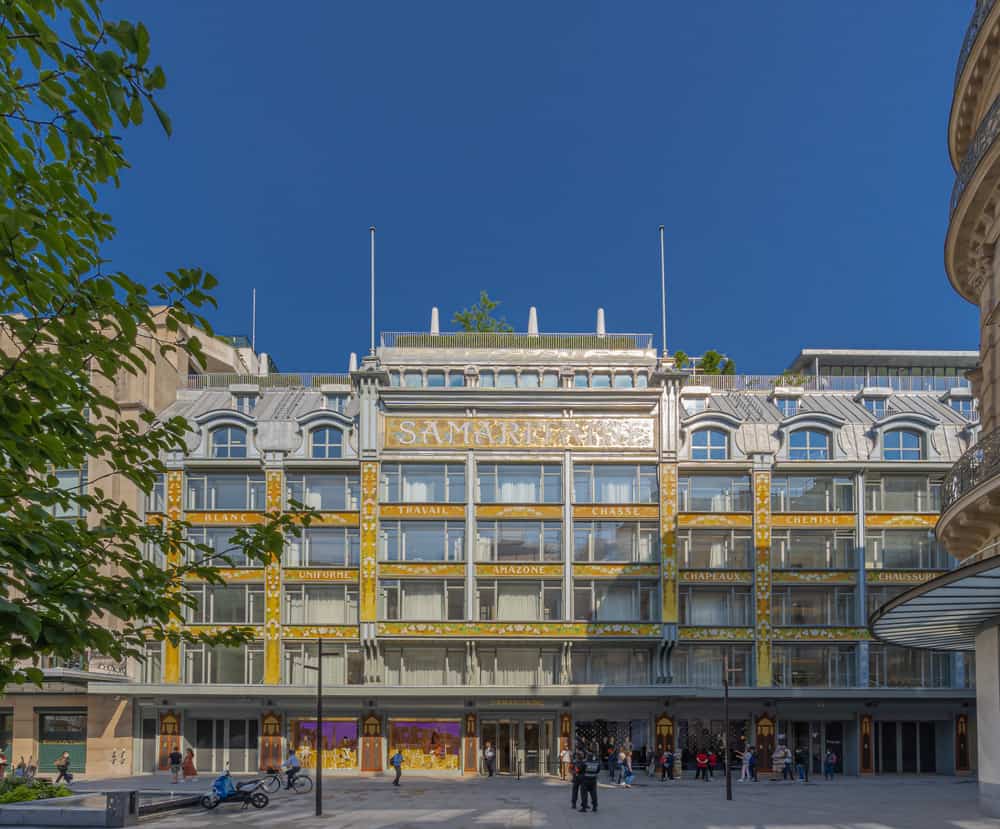 The new building, known as Magasin 2, was located across the street and by the time construction works were complete, in 1910, the building filled a complete block of four rues. The structure of Magasin 1 was also upgraded with a steel-framework to match Magasin 2.

Later on, the steel-work design of the stores had to be altered due to new architectural waves, the glass domes, for example, were removed and the Art Nouveau style of the building was altered to conform more to Art Deco style. By the beginning of the 1930s, La Samaritaine consisted of four Magasins with a total of 11 stories.

Despite the huge success of La Samaritaine, the department store began to incur losses since the 1970s. The structure of the building began to deteriorate as well, eventually leading to its closure in 2005, for the reconstruction, redevelopment and update of safety standards in the building.

The owning company, LVMH, commissioned a Japanese design company called SANAA to handle the renovation. La Samaritaine was initially set to reopen in 2019, however, due to delay in the reconstruction process several times, the giant department store finally reopened its doors in 2021.

Where is La Samaritaine?

This department store is located at 9 Rue de la Monnaie, 75001, which is in the 1st arrondissement in the French Capital, Paris.

Since June 23rd, 2021, La Samaritaine is officially open for the public again.

How to get to La Samaritaine?

There are two metro stations close-by:

DFS, the operating company of La Samaritaine offer great opportunities to join the world of luxury-retail. Through their core values and their Employer Promise, they offer several career paths for you to choose from.

Corporate Functions, Merchandising and Planning, Store Operations and Management Development Programs are the paths they offer you to explore. They even offer a Graduate Development Program, which is a great way for fresh graduates to build up experience.

Since the positions available can change from time to time, it is best to frequently check their official website to keep up to date.

What to do at La Samaritaine

This renovated department store is not only for shopping, some would say luxury shopping that it. There are beauty salons, restaurants, a brewery, a spa, the so-called Parisian Department and even some offices. 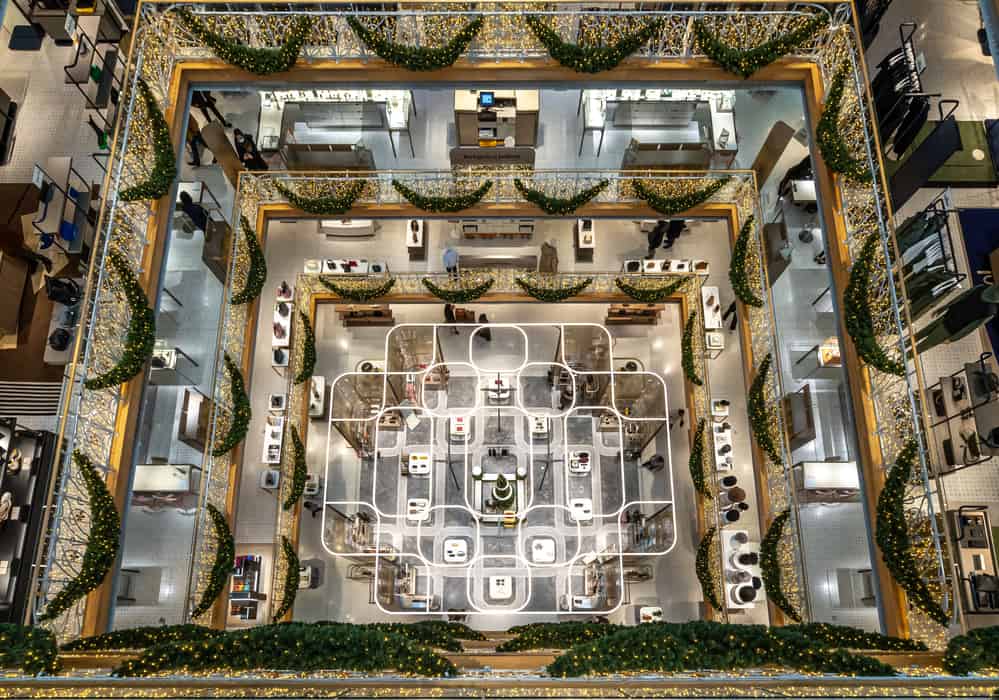 The Parisian Department is promoted as the way to experience fashion the “Parisian” way. It is where you get to sit comfortably and one of the assistants will pick items for you to try, from different boutiques, according to your taste of course.

On occasion, a beauty class is offered at the store where you can learn some of the tips and tricks of make-up and perhaps enjoy a beauty treatment as well.

This French Gothic church was built in the 12th century and was only finished in the 15th century. The building still standing until today was commenced in the 13th century and underwent modifications in the 15th and 16th centuries. The church is dedicated to Saint Germanus of Auxerre, who met the Patron Saint of Paris, Saint Genevieve on his travels.

Many of the artists who worked on the decoration of the church and its paintings, such as Antoine Coysevox, are buried inside the church. Since the Notre-Dame Cathedral fire in 2019, the services of the cathedral have been held at the Eglise St. Germain d’Auxerrois.

The Louvre does not need an introduction as it is the museum welcoming the largest number of visitors from around the world each year. The museum’s collection of artwork, artifacts, sculptures and antiques amounts to 615,797 objects. The artifacts are divided over five departments: Egyptian Antiquities, Near Eastern Antiquities, Greek, Etruscan and Roman, Islamic Art, Sculptures, Decorative Arts, Painting and Prints and Drawings. 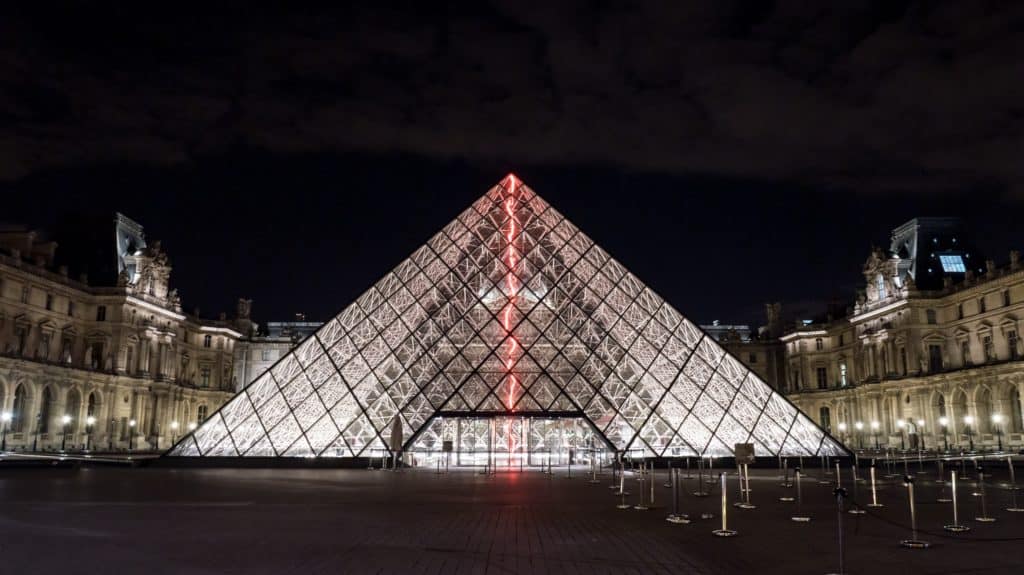 The illuminated glass pyramid at The Louvre

This art gallery with an unusual façade is one of the best gathering spots for artists and art lovers in Paris. With free entry, you can enjoy many forms of art, such as paintings, sculptures and electronic art, on display and even buy them. The gallery welcomes visitors every day from 1:00 pm to 8:00 pm.

59 Rivoli is rather called an Art Squat, because of its beginning, when many artists such as Gaspard Delanoe squatted inside the building and began showcasing their works. The legal status of the building was corrected when the Paris City Hall bought and building, renovated it and reopened it in 2009.

This cozy garden in the shape of a triangle is located on the Ile de la Cité, is a perfect spot to get away from the hustle and bustle of the city and just watch the world around you as you relax in the middle of The Seine. The park is full of different types of trees and it is always a good idea to check the weather conditions before visiting, since the park can get flooded with water if there’s heavy rain or flooding.

Where to stay near La Samaritaine

Less than half a kilometer away from La Samaritaine and the Louvre Museum, Timhotel Le Louvre offers you brightly-colored and modernly-furnished rooms. The patio is decorated with beautiful flowers, perfect for enjoying breakfast in the sunny morning.

A Twin Room, with two single beds, for two nights, with taxes and charges, will be a total of €416 and an additional €14 can be added to enjoy their breakfast. This offer has free cancelation and payment at the property included.

About a kilometer away from La Samaritaine, this hotel is most rated for its location, cleanliness, staff friendliness and comfort. It is also fairly close to other attractions, such as the Louvre Museum and Notre-Dame Cathedral.

With antique-decorated rooms and great location, close to both the Louvre Museum and the Notre-Dame Cathedral, Hotel Clement is also less than a kilometer away from La Samaritaine. If you’re planning to visit the Luxembourg Gardens, they are only 600 meters away.

You can have your pick from either a Superior Room with one double bed, or a Twin Room with two single beds, for a two-night stay, with free cancelation and payment at the property, which will cost €355 with taxes and charges. When reserving either room, an extra €12 can be added if you’d like to enjoy breakfast at the hotel.

This luxury hotel has opened its doors after renovations to offer you a new level of luxury. Cheval Blanc gives you the opportunity to enjoy the panoramic view of the city ahead of you, with comfort and elegance.

Since it is a luxury hotel, rooms at the Cheval Blanc start from €1,450 per night, including taxes and charges, for a Deluxe Room, and with breakfast included. Suites are available for booking as well, with prices starting at €2,250 per night.

This French café and restaurant offers many vegetarian-friendly, vegan and and gluten-free options. The price range of their menu is between €4 and €20. Reviewers recommend the place for having some of the best crepes in Paris and say it is perfect for brunch or to grab some coffee.

With beautiful tables lined outside, this restaurant also offers dining inside at the great price range between €18 and €33. Le Louvre Ripaille specializes in French and European cuisines with vegetarian-friendly options as well. Reviewers loved how the food is so delicious and at great prices as well.

If you are craving Italian food for any meal of the day, this is the place for you. Beccuti offers great vegetarian-friendly and vegan options as well as traditional Italian dishes. Reviewers said that it is rare to find authentic Italian food in Paris, and they found it here, at Beccuti.

Specializing in French and European cuisines, with healthy and vegetarian-friendly options, Le Fumoir has a great price range between €10 to €23. Guests have highly praised their grilled beef fillet, the tasting menu and one guest even said the salmon appetizer was one of the best they had in their 70 years.

Awarded the Traveler’s Choice badge in 2021 on TripAdvisor, Au Vieux Comptoir offers French, European and vegetarian-friendly options. The place is great for a lovely dinner experience and try something new for a price range between €37 and €74.

What People are saying about La Samaritaine (TripAdvisor Reviews)

Reviewers on TripAdvisor have all agreed that the redesigning of La Samaritaine has been phenomenal, especially the decorative elements of the interior. The company responsible for the redesign used these elements to lure visitors more to explore the upper stories of the building, hence increasing consumer traffic.

The new building was compared to other high-end Paris stores such as Galleries LaFayette and Printemps and Harrods in London. The same reviewer said the place should be considered as a museum rather than a retail shop, since most prices are a bit high for many buyers.

I suppose this concludes it, if you’re up for spending some time in a warm-toned building and atmosphere, you can visit La Samaritaine to enjoy your time. You don’t need to buy anything!

Have you ever been to La Samaritaine? How was it? Have we missed anything? Let us know in the comments below!

This post first appeared on Connolly Cove Ireland Travel, please read the originial post: here
People also like
Things to Do in New York City This Weekend
Nice hold further talks with Arsenal flop Pepe over a return to Ligue 1 on loan