Serdica is the old name of the city of Sofia; the capital of Bulgaria. The name originated from the Thracian founders of the city back in 2,000 BC. The Celtic tribe Serdi bestowed their name among the city they chose as residence as they mainly settled around the mineral springs.

The name Serdica also refers to the district in the center of the city of Sofia. The district is divided into four neighborhoods and has different public service facilities to accommodate for the citizens. The Central Railway Station, Central Bus Station and the Lion’s Bridge (Lavov Most) also exist in the district of Serdica.

The first documented habitants of Serdica, even before it acquired such a name, were from the 30th millennium BC. The city became residence to the Thracian Tilataei who were the first to settle there. After that the city became part of a Thracian state union; the Odrysian kingdom. The city of Serdica suffered destruction for the first time at the hands of Phillip II of Macedon in 339 BC.

Under Roman rule starting 29 BC, Serdica was an important fortress and an economic and administrative center. During the reign of the Emperor Trajan, the city expanded with additions of turrets, protective walls, public baths, administrative and cult buildings, a civic basilica an Amphitheater, a circus, the City Council, a large forum and a big circus or a theater. The Roman Emperor Marcus Aurelius ordered the fortification of the city with defense walls between 176 and 180.

Serdica’s importance increased as it was an important city on the Roman road Via Militaris which connected  Singidunum and Byzantium. Following the Edict of Toleration issued in 311; where Emperor Galerius decreed a policy of tolerance towards Christianity. The edict was the first to legislate Christianity preceding the Edict of Milan by two years. Serdica became one of the first Roman cities where Christianity was recognized and embraced as an official religion.

Serdica before the decline of the Roman Empire

Constantine the Great used to say “Serdika is my Rome” as he fell in love with the city. He reigned from there until the city of Constantinople was established before the decision of moving the capital of the Eastern Roman Empire from Serdica to Constantinople was taken. Serdica was fortified by the building of a wall with four gates and observation towers that looked at the four directions of the world.

During the decline of the Roman Empire, the city was raided by many forces; the Huns, Visigoths, Avars and Slavs. The city was completely destroyed after the attack by the Huns in 447 after which Serdica was left in ruins for a century. The Byzantine Emperor Justinian I rebuilt the city after which the city flourished and he ordered the building of another fortified walls around it, the remanents of which can still be seen today.

Serdica was incorporated into the First Bulgarian Empire in 809 by Khan Krum after a long siege. The city’s fall led to the invasion of the entriety of Bulgaria at the hands of the Byzantine Emperor Nikephoros I. Since then the city was permanently integrated in Bulgaria and its name changed to the Slavic name Sredets.

The Byzantine rule continued over Sredets until it was taken over by the Ottomans in the 14th century. Renamed as Sofia, the city maintained its administrative and economic relevance. The Ottoman grip on the city began to slip with revolutionary movements rising up and the whole of Bulgaria was free from the Ottoman after the Russo-Turkish War 1877-1878.

Evidence of the old city of Serdica can still be found around the current city of Sofia. Accidental digging led to planned excavation of the remains of one of the most important buildings of the old city; the Amphitheater of Serdica. Several findings from that period of time are on display at the Serdica Metro Station.

Discovery of the Amphitheater of Serdica:

Once located outside the walls of the ancient city of Serdica, the amphitheater was discovered by accident during early construction works in 2004 of what is now known as Arena di Serdica Hotel. The existence of a Roman amphitheater had been the subject of debate for years.

After the discovery of a stone plate near what is now the Council of Ministers of Bulgaria, the debate got heated. The stone plate showed the façade of an amphitheater and fights between gladiators and wild animals such as crocodiles, bulls and wild cats.

The remaining part of the ruins were discovered while digging for a National Electric Company office in 2007. After the discovery a campaign began to advocate the prevention of the construction works of the company. The parts discovered were the western entrance and the adjacent part of the amphitheater.

The Structure of the Amphitheater of Serdica:

The amphitheater was originally built on the ruins of an earlier Roman theater from the 2nd or 3rd century AD. The ruins of the theater were discovered 5 meters under the amphitheater ruins. It is believed the theater was built at the same time as the city’s defensive walls around Serdica under the reign of Commodus and was in use until it was ravaged and burned by a Gothic raid in the first half of 268.

Coin and ceramic findings indicate that the amphitheater was constructed on the ruins of the theater through two stages in the late 3rd century and early 4th centuries AD under Roman Emperors Diocletian and Constantine the Great. The amphitheater is believed to have been in use for less than a century, most probable because of anti-pagan policies of Theodosius I.

Barbarian invaders in the 5th and 6th centuries set their homes within the former arena. The abandoned amphitheater was used as a source of building materials for new housing during the Ottoman period.

The amphitheater was designed to host a maximum of 20,000 to 25,000 people and had an east-west orientation, much like arenas in the Mediterranean region. The amphitheater had two main gates, from the west and the east and were connected by an underground water canal.

Among the excavated and preserved ruins are the main entrance of the amphitheater, the underground level, part of the main section with about seven spectator seats and gates with sliding doors let animals into the arena. Other excavated items include bear and boar bones, hundreds of bronze coins and clay stones imprinted with footprints of goats, cats and dogs.

Location and opening of the Ancient Serdica Archeological Complex:

Located at The Largo, the square between the Council of the Ministers and The Presidency, this restored ancient Roman complex of Serdica was opened in 2016. Dubbed as the Lost Roman city of Serdica, the unveiling of this fascinating archeological site was the fruit of years of excavation and restoration works carried by the Bulgarian government. 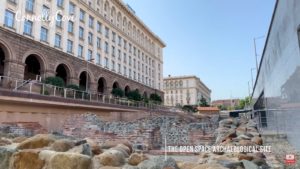 The preserved site offers visitors a glimpse into the history of this once significant Roman city. The structure of the complex is very unique as some of it was partially covered by glass domes giving an even more majestic appeal to the area. Other parts are visible from the outside city streets of Sofia.

Much of the revealed complex exists underground; below street level. The complex consists of 8 streets, what was an early Christian Basilica – which is believed to have been built over two stages, from the 4th to late 5th centuries and 5th to late 6th centuries. There’s the largest and earliest find from ancient Serdica; six large buildings and a late Medieval Church.

Visitors can walk around the ancient city marveling at its beauty. The 2,000 year old pavement is almost completely preserved. A building called Felix House is among the city, it is a 650 square meters building with several rooms around an inner courtyard dating back to the 4th or 6th centuries. An inscription on the mosaic floor of the house was interpreted as the name of its owner; Felix, an important resident of Serdica.

Another house is believed to have been the home of Leontius, believed by the archeologists who worked on the site to be that of the Archbishop of Serdica in the late decades of the 6th century. The house was presumably built between the 4th and 6th centuries.

Under the Glass Domes – The Open Air Museum of Ancient Serdica: 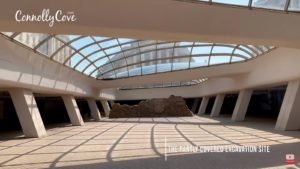 Under one of the glass domes between the Council and the Presidency there’s a stage that’s intended for use of as a theater, concerts and other events. One of the most important attractions is Decumanus Maximus which is one of the two main streets of the ancient city of Serdica. 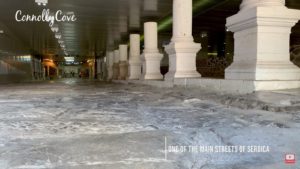 Decumanus Maximus, one of the two main streets of the city of Serdica

Of the many challenges that arose during the restoration works was how to preserve the ruins at the same time of the construction of the Sofia Subway because the tunnels had to pass beneath the preservation site. More expansion work is to be done in the site to fully recover a large Roman mosaic which still lies under the ruins. 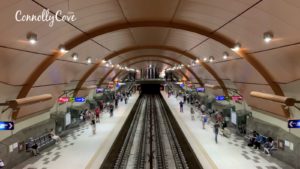 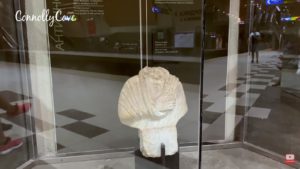 In Serdica II Station, the historic findings are arranged in a chronological manner to tell the history of Sofia’s past from the Neolithic era up to the date of the station’s construction. Information labels in both Bulgarian and English language are fortified by excellent maps that help explain the archeological history of Sofia. 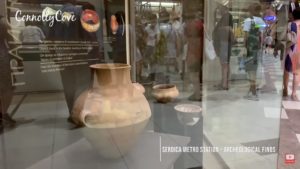 Around the Serdica metro station are many famous landmarks that are must-make stops during your visit to Sofia. Most notable is “The Triangle of Peace” which witnesses the existence of three worship places of three major world religions; Judaism, Christianity and Islam. These buildings being the Sofia Synagogue, the Sveta Nedelya Church and the Banya Bashi Mosque.

The Sofia Synagogue is the oldest in Southeastern Europe and is one of two functioning synagogues in Bulgaria, with the second one being in Plovdiv. Construction works began in 1905 and finished in 1909. The synagogue is home to the Jewish Museum of History since 1992 which displays the Jewish community in Bulgaria, the Holocaust and the Rescue of the Jews in Bulgaria expositions.

This church was destroyed and rebuilt several times throughout history. The originally wooden church was demolished in 1856 to start the foundations of a new church. The new church was finished in 1863 and was inaugurated in 1867. After the assault of 1925, restoration works were carried out between 1927 and 1933.

Currently the only functioning mosque in Sofia, it was built over natural thermal spas. The steam from the spas near the mosque can be seen from outside. The mosque was designed by the famous Ottoman architect Mimar Sinan and completed in 1566. 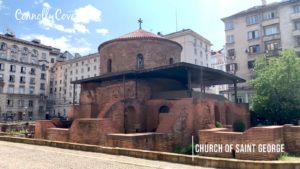 The church is part of a bigger archeological complex of ancient ruins consisting of a Roman street with preserved drainage, foundations of a large basilica and some smaller buildings.

The old Sofia district of Serdica offers you delicious meals to properly put an end to your day of historical exploration. There are some vegetarian friendly restaurants as well that will accommodate to its customers’ taste. A meatless version of some traditional Bulgarian dishes are served during the Christmas season such as Sarmi; cabbage or vine leaves stuffed with rice and ground meat and Byurek Peppers which are peppers stuffed with rice and ground meat.

The historical and food scene in Serdica is very diverse and inviting, you’re guaranteed to enjoy your time in the streets of this district.