Travelling to the Austrian Capital, Vienna? Take our Virtual Tour!

Among the most artistic, picturesque, musical, beautifully architectural, and naturally gorgeous destinations of Europe and the world stands the mystical capital of Austria, Vienna.

Located on the banks of the Danube River, Vienna has played, for centuries, the role of the gateway between West Europe and East Europe, and still maintains its status as one of Europe’s most important commercial and cultural hubs.

Thanks to its iconic charm and extremely rich history, Vienna has been and continues to be one of the most visited destinations in all of Europe.

Therefore, if you are planning to join the thousands of visitors who indulge in the Austrian capital’s iconic beauty and one-of-a-kind charm every year -as you should-, then go right ahead and take our virtual tour around the cosmopolitan European beauty that is Vienna.

Where to go & what to do in Vienna:

The sights to see and activities to do in the Austrian capital may not be able to fit over the course of one vacation, so to help you plan out your itinerary in the most efficient way possible, we have gathered for you the best things to do and most gorgeous sights to see around beautiful Vienna. 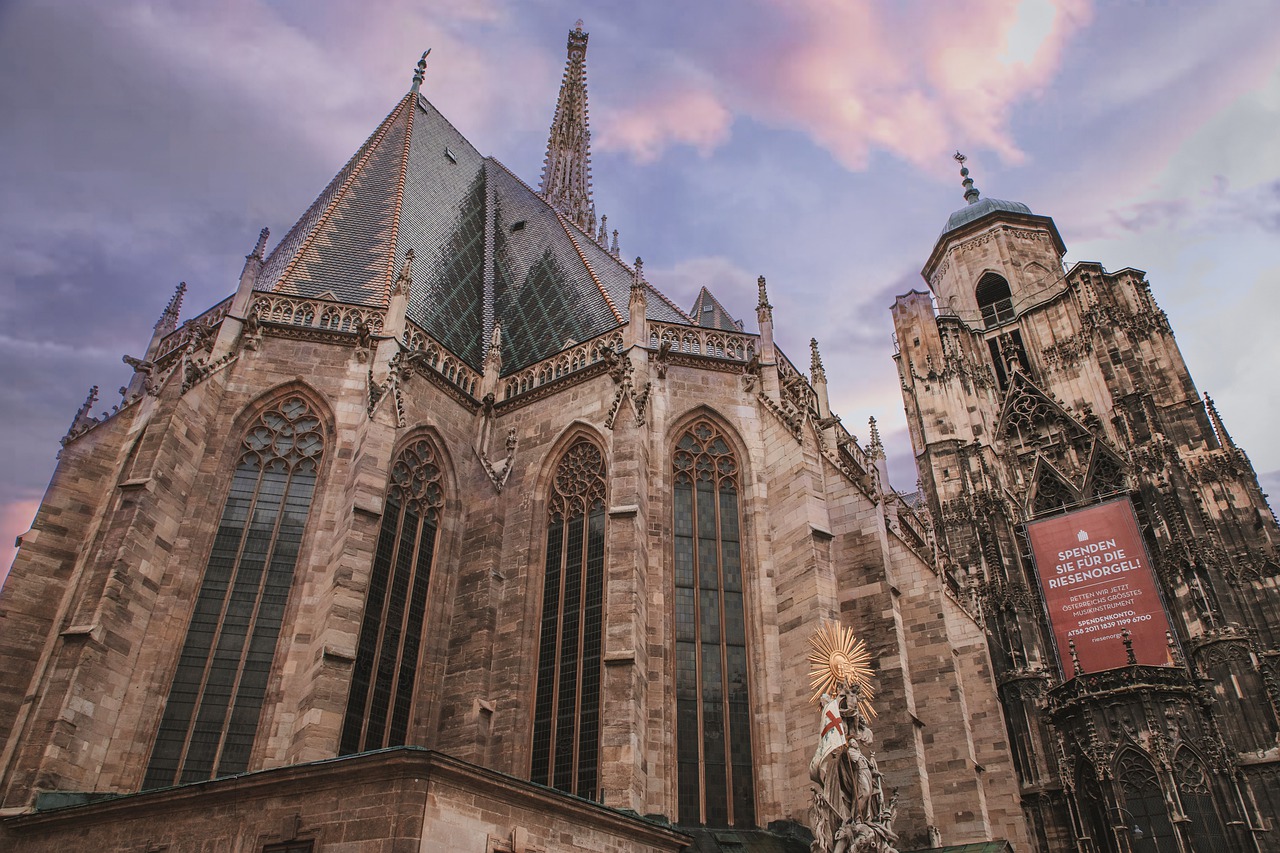 The original Cathedral of St. Stephan was built in a Romanesque style in the 12th century. The 14th-century reconstruction of the cathedral was in the Gothic style, with said reconstruction, came the addition of the choir and the chapels of St. Eligius, St. Trina, and St. Catherine. The famous 137-meter high South Tower of the cathedral belongs to the 15th-century reconstruction. Later on, after World War II, the whole structure of St. Stephan’s Cathedral was rebuilt.

So, it is safe to say that this one historic monument holds within its walls a piece of each era of Vienna’s history.

St. Peter’s Catholic Church or Peterskirche is built where an old Roman church originally stood. The church’s building which we see today dates back to the 18th century and boasts a massive dome with an impressive fresco and several unique artistic treasures.

Therefore, this magnificent religious and historic monument must be a part of your Viennese adventure. 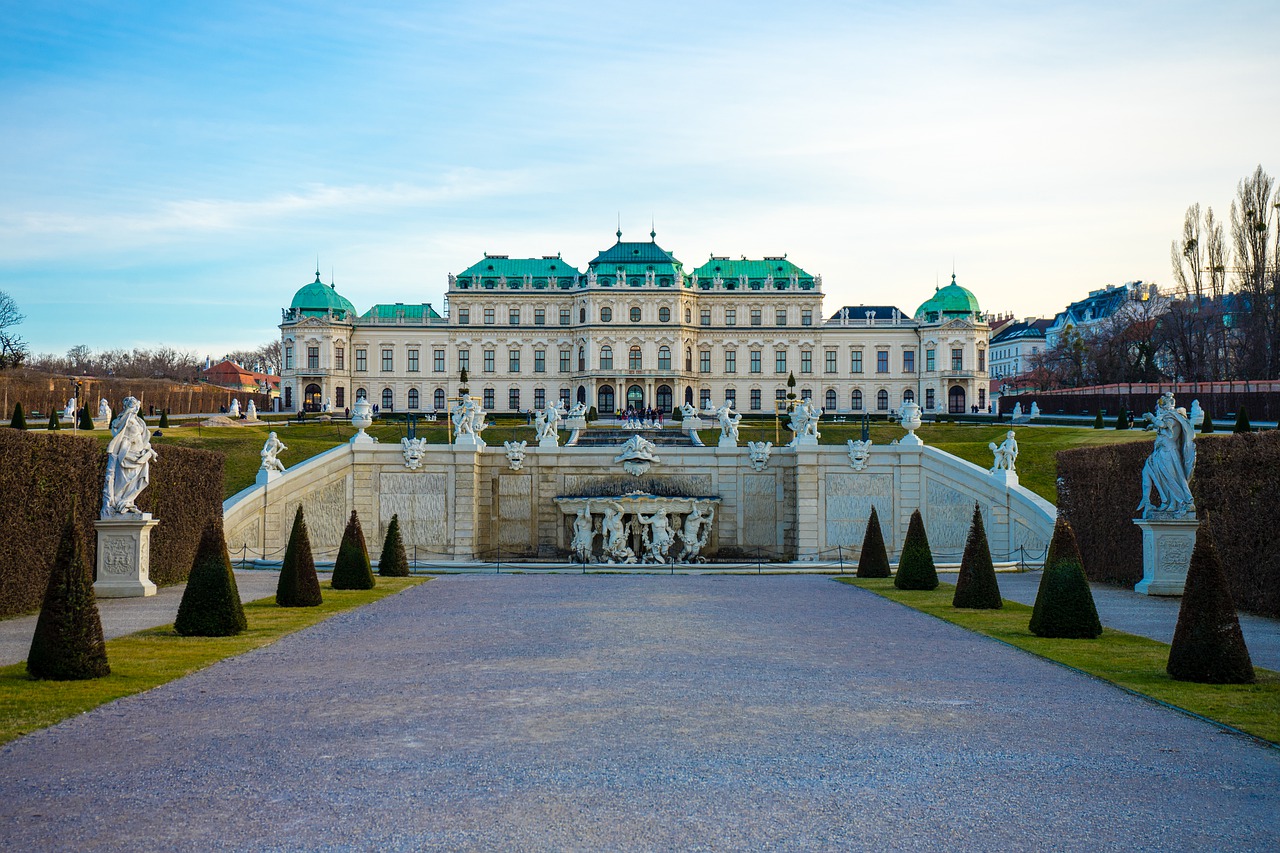 Inside the upper palace, there is a marble hallway, the ground floor hall features several historic statues, and the ceremonial staircase features rich stucco and frescos.

The lower palace also boasts a marble hall, as well as oval plaster medallions, a rich ceiling fresco, and a marble gallery built to house a collection of historic statues. 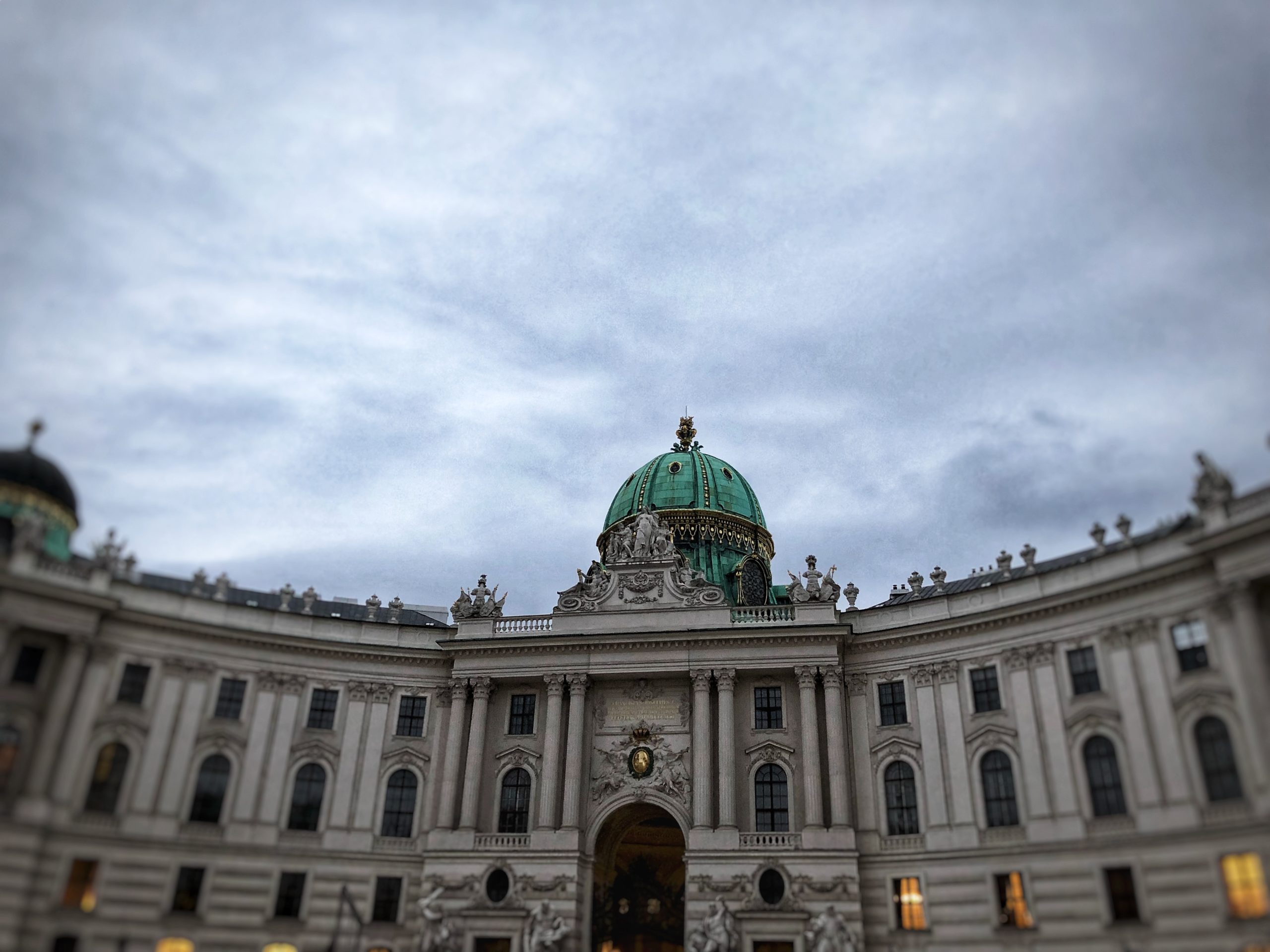 Vienna’s most historically significant palace is without a doubt the imperial Hofburg Palace. For over six centuries, the Hofburg has been the seat of the Hapsburgs and the official residence of every Austrian ruler since 1275 till this very day.

This architecturally and historically significant monument consists of several buildings that reflect different periods of the capital’s history as well as several architectural styles from the Gothic, Renaissance, Baroque, and Rococo movements.

The Hofburg palace consists of 18 groups of buildings including 19 courtyards and 2600 rooms covering 59 acres. The most famous of the building’s many attractions are the Imperial Apartments, the Sisi Museum, and the Silver Collection. 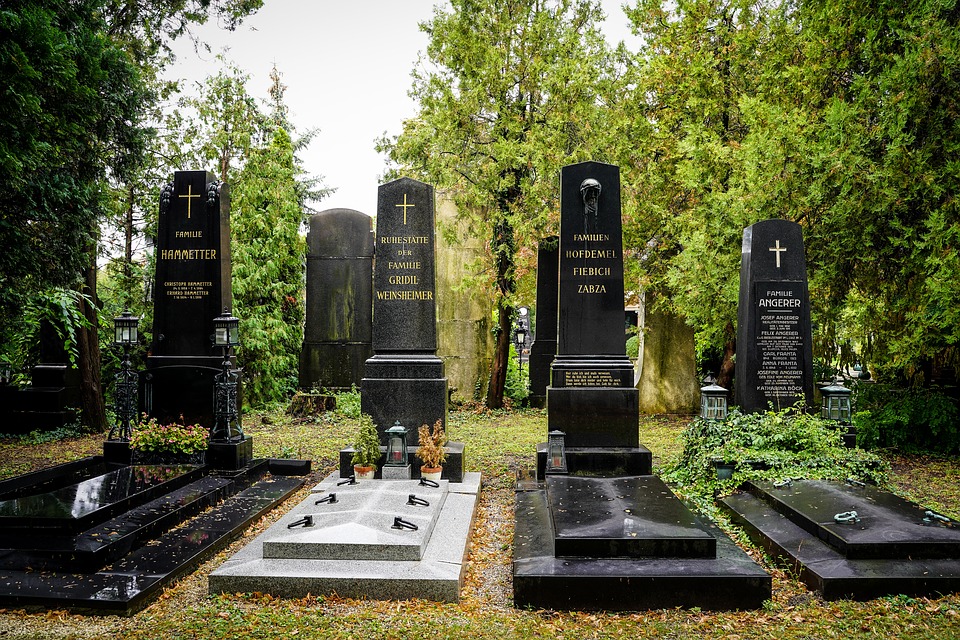 Just a short tram ride from the city centre, the city’s Central Cemetery is a frequently visited site among Vienna’s beautiful attractions. The way it has been impressively maintained across the years makes it seem more like a preserved park than a graveyard.

If you do decide to visit it, make sure to pay your respect to some of the city’s luminaries such as Strauss, Brahms, Shubert, and Beethoven.

Since Vienna’s MuseumsQuartier or Quarter Museum opened its doors in 2001, it has been one of Vienna’s most visited museums as it is the home to several significant museums.

One of said museums is the Leopold Museum which holds quite the large collection of works by some of Austria’s best modern artists such as Gustav Klimt and Egon Schiele. Another must-visit museum within the MuseumsQuartier is MUMOK which features more than 10,000 contemporary and modern pieces by major artists like Picasso and Warhol.

The Vienna State Opera House or Wiener Staatsoper is undoubtedly one the largest and most astonishing theaters in the world.

Ever since it was built in 1869, the magnificent Vienna State Opera House has hosted countless performances by some of the world’s most prominent composers, soloists, conductors, dancers, and more. At least 300 operatic and ballet performances are held in this Viennese massive opera house per year. 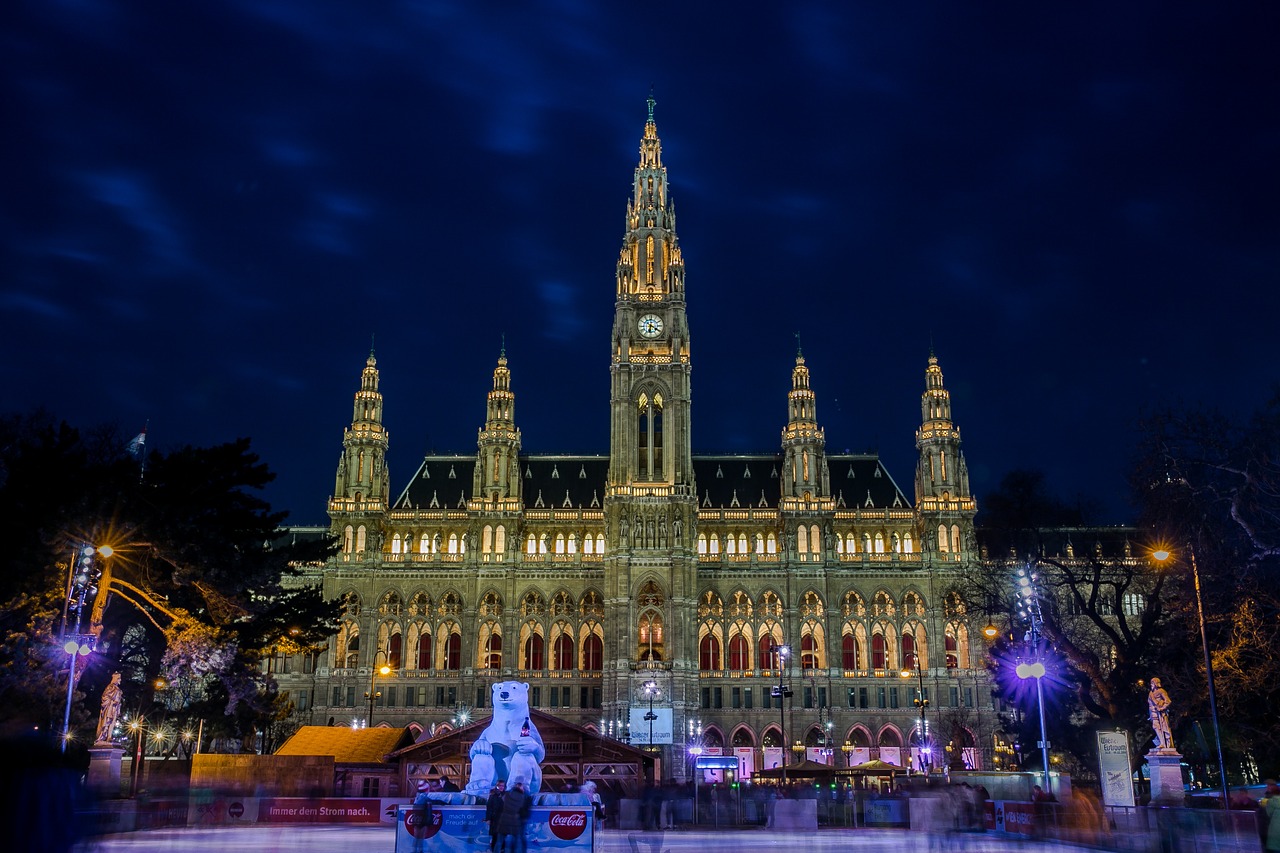 Although Vienna’s City Hall or Wiener Rathaus is practically just the city’s administrative centre, its massive size and Neo-Gothic style make it one of Vienna’s most visited sites.

Occupying almost 14,000 square meters of the former Parade Ground, this visually iconic building which was completed in 1883 is known for the famous Rathausmann on top of its 98-meter-high tower.

The arcaded courtyard in the centre of Vienna’s City Hall building is the largest of the building’s seven courtyards and is used to host outdoor concerts in the summer. 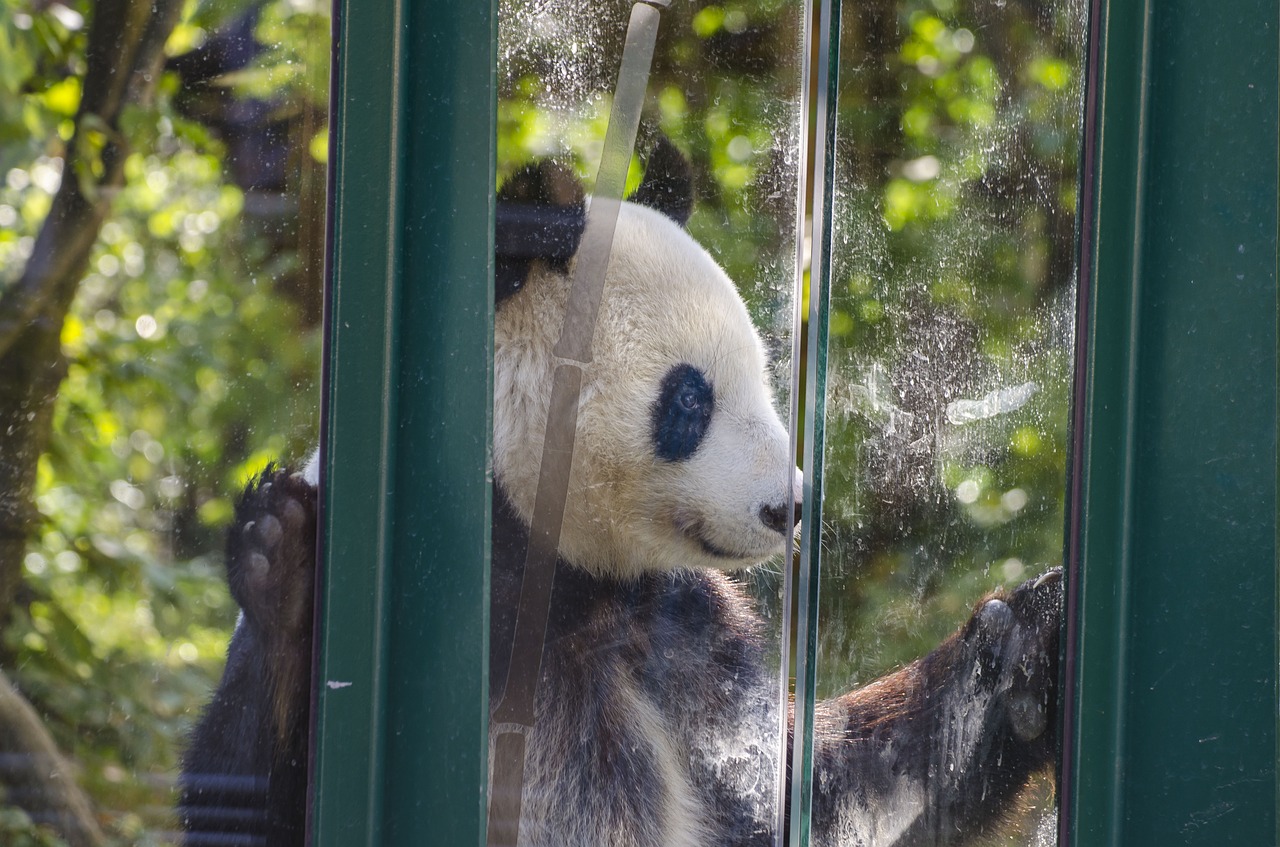 Founded in 1752, the Vienna Zoo – also known as Schönbrunn Zoo (Tiergarten Schönbrunn) – is the world’s oldest continually operating zoo. A lot of the zoo’s original Baroque buildings are still intact to this day making it one of Europe’s most beautiful and most popular zoos.

Vienna’s Zoo is the home to over 750 species, the highlight of which are giant pandas, in addition to several fascinating creatures in the interactive Rainforest House and Aquarium. 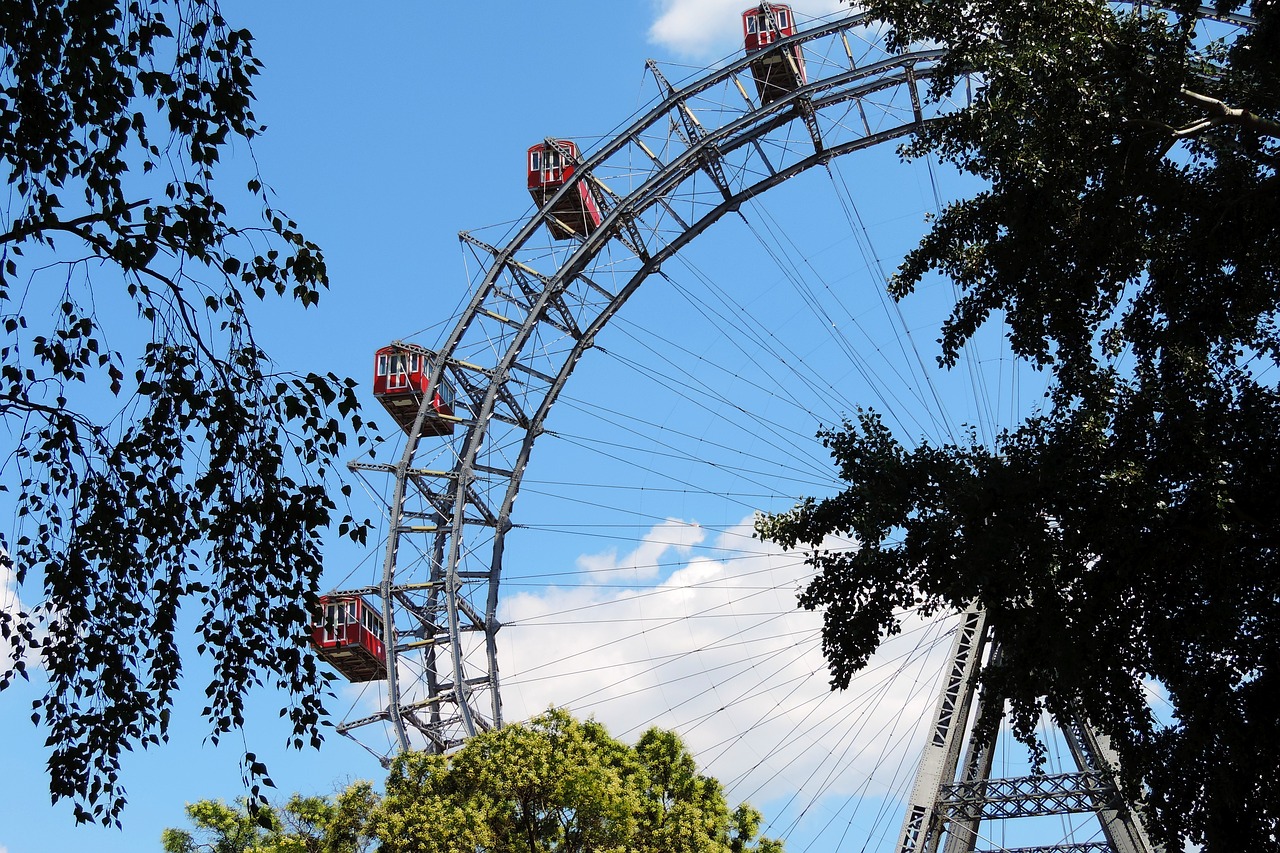 Located between the Danube river and its canal and spanning across 3,200 acres, Prater is undoubtedly one of the largest amusement parks in all of Europe.

This vast Viennese recreational park offers something for everyone with its old-fashioned theme rides, dinosaur-themed park, to its unmistakable giant Ferris Wheel or Wiener Riesenrad which is considered a Viennese landmark as it has been in operation since 1896, providing riders an unforgettable view over the entire Austrian capital.

When is the best time to visit Vienna?

You can basically enjoy Vienna all year round, so it really depends on your preferences. If you would like to escape crowds, then try to aim to go over the spring or fall from April to May or September to October as the weather is fairly mild and the streets are not as crowded. On the other hand, over the summer months from June to August, the streets of Vienna usually fill up and therefore, accommodation rates tend to increase greatly.

Where to eat in Vienna?

Now that you have known where to go and when to go, time to know where to eat while you are in Vienna. So let’s go over Vienna’s best restaurants:

Now that you have got basically everything you need to plan out your next adventure in the Austrian capital, Vienna. All that is left is for you to start packing and get prepared for a once-in-a-lifetime experience.

If you feel like exploring more of the world’s best and most beautiful cities, you can find more inspiration here.

Travelling to the Austrian Capital, Vienna? Take our Virtual Tour!