The King Farouk Rest House Museum is located directly on the banks of the Nile, six km west of Helwan, along the main road from Cairo to Helwan.

The rest house was designed in the form of a boat headed on the shore of the Nile. The iron pillars on the roof were installed with curtains that give the shape of the sails of the boat. There are also stone terraces on the beach where the King sat to enjoy the view of the Nile and practiced his hobby of fishing.

The river marina was designed to receive yachts and large ships, while the garden was decorated with a wooden pergola, limestone vases, and planters. This garden also includes 33 mango trees of a type rarely cultivated in Egypt and was brought to the royal palaces from Albania. The museum display includes a valuable collection of royal possessions, including furniture, antiques, statues, and paintings.

What Can You See at King Farouk’s Rest House?

The location, which was called “Farouk’s Corner” or Farouk’s Royal Lounge, features belongings of the Alawite family that had never been seen before. These are some of the top historical artefacts in Egypt.

King Farouk had bought it as a piece of vacant land, the area of ​​which, after adding gardens, reached 11,000 square meters, and the royal lounge was built on an area of ​​440 square meters.

King Farouk was keen to provide his lounge with everything valuable, as well as choosing some special archaeological artefacts to include in it, the most important of which are the treasures of the young pharaoh “Tutankhamun”, in addition to other Pharaonic holdings.

The rest house was set up for King Farouk in 1943, and after the July Revolution. It was preserved and included in the list of historic monuments.

Although King Farouk was keen to furnish the Rest House according to the latest fashion at the time, the last king of Egypt did not stay there for long. Rather, he did not come to visit it, except twice, despite its preparation in a manner worthy of kings and rulers.

Farouk’s Corner, built in a modern style, has three floors. The ground floor has a large gate in the back of the palace and includes servants’ rooms and their annexes. At the entrance is a life-size bronze statue of a woman adorned with pharaonic ornaments playing the harp with a marble base, in addition to a bronze sphinx and a gilded metal desk clock consisting of crystal plates and 12 antique lobes and golden scorpions, as well as Pharaonic gold statues of crocodiles.

It’s an incredible off the beaten track destination in Egypt.

The first floor is the main floor, and it includes a marble staircase that leads to the outer hall. This leads to an inner hall, including two dining rooms, another smoking hall, and a balcony overlooking the Nile.

This floor includes wonderful paintings by the most famous artists of the world at the time, including the painting of old Cairo by Eichmann, and a group of rare bronze statues.

Among the palace’s rooms is Queen Nariman’s room, which includes her bed covered in a “rose” mattress and a mirror, and a picture of her and the king at their legendary wedding at the time, in addition to a small bed for Crown Prince Ahmed, King Farouk’s son who was forced into exile as an infant along with his father. The crown prince had previously visited the rest house and was left in awe of his father’s past.

In addition to these collectibles, there is a “radio” equipped with a device for cylinders inside a box of Turkish walnut, which is the shape of a temple decorated with some conical columns with crowns in the form of a lotus flower, bearing the name of the king in hieroglyphs.

Inside the restroom is a group of dolls that were given to the two former queens of Egypt, Farida, and Nariman, numbering 379 brides from 33 countries, with different costumes and distinct shapes.

One of the most valuable items in the museum on this floor is a watch that Empress Eugenie gifted to Khedive Ismail on the occasion of the opening of the Suez Canal until it reached King Farouk. As for the second floor, it can be reached through a marble staircase that leads to the roof, which the king used for his private evenings.

It is the ideal place to brush up on your Egyptian history. 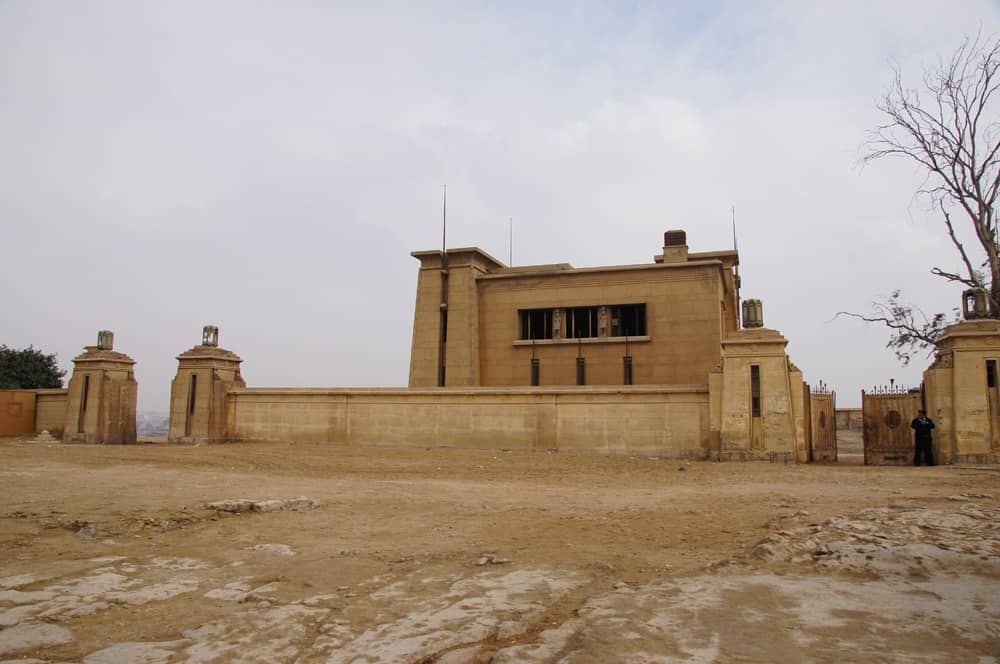 Helwan, the City of Royals

Helwan, where the rest house is located, was called the city of the pashas, as it was the location of many discoveries of tombs that belonged to princes and senior officials during the era of the pharaohs, as well as the tombs of some public citizens. Its history dates back to the first and second Pharaonic dynasties.

During the reign of “Abdul Aziz bin Marwan” over Egypt, around the year 690, he transferred his government to Helwan. He tried to encourage those who were able to move to Helwan and build their homes there to establish it as the capital of Egypt.

In the Ottoman era, requests were directed to many princes, pashas, ​​beys, and other figures from Cairo to build their palaces and villas in Helwan. Helwan is located to the east of the Nile in the area in front of the capital “Memphis”, which was considered the constant reference for the separation between the north and south of Egypt, which gives it special importance.

Helwan is also easily accessible by road from Luxor.

When and How Can You Visit?

Check out our guide to planning your next Egyptian Adventure.