One of Belfast’s most prestigious and famous addresses, the Europa Hotel is both a landmark and something of an institution in Northern Ireland. A four-star hotel located in the heart of Belfast City, in Great Victoria Street beside the Grand Opera House and facing the Crown Bar, the hotel includes shops, restaurants, theatres and bars, and is also close to all of the city’s business, entertainment and shopping districts. It’s a place where presidents, prime ministers and celebrities were hosted.

Tragically, it was named as the most bombed Hotel in Europe and the world, after suffering 36 bomb attacks during the Troubles (was an ethno-nationalist conflict in Northern Ireland during the late 20th century).

The Europa Hotel has 272 bedrooms, including 92 executive suites. On the ground floor, there is the lobby bar and the causerie restaurant, and the Piano Bar lounge is located on the first floor. The hotel also has a conference and exhibition centre, 16 flexible conference and banqueting suites, as well as a 12th-floor penthouse suite.

Check into the hotel room and go explore Belfast. The capital city of Northern Ireland is a must-visit when you come to Ireland, where you’ll find the best restaurants, and great attractions like Titanic Belfast, the Grand Opera House and Victoria Square. Another place any tourist must visit in Belfast is the Game of Thrones Tour that starts off from the Europa Hotel regularly. This tour will take you on a journey along the scenic Causeway Coast to many of the key locations featured in the hit TV show. 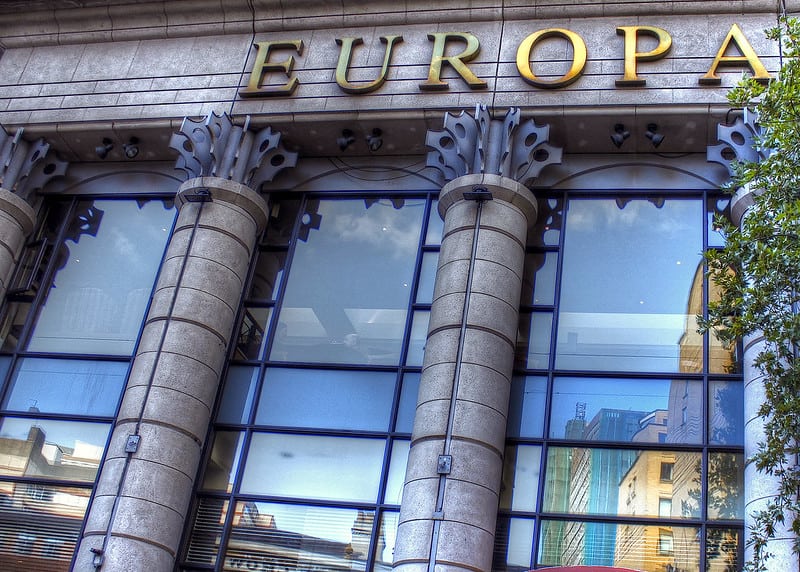 The front of the Europa Hotel (Source: psyberartist)

The hotel was constructed by Grand Metropolitan and designed by architects Sydney Kaye, Eric Firkin & Partners. It opened in July 1971. Europa hotel was built on the site of the former Great Northern Railway station and stands 51 meters high. In 1981, Grand Metropolitan bought the Inter-Continental Hotel chain and placed the Europa in their Forum hotels division. They renamed the hotel the Forum Hotel Belfast in February 1983. In October 1986, the hotel regained its original name when it was sold to The Emerald Group. In 1993, the hotel was blown up and damaged by the Provisional IRA (The Irish Republican Army) and was sold for 4 million dollars.

The Hastings Group bought the Europa in 1993 and announced that it would close for the first time in its 22 year history to allow for a major refurbishment and through an investment of 8 million dollars, it reopened in February of 1994. The first event held at the hotel was Flax Trust Ball; a ceremonial evening for 500 local and international dignitaries.

Some of the famous people who stayed in the Europa Hotel were President Clinton and First Lady Hillary Clinton in November of 1995. They stayed in a suite that was later named as the Clinton suite and the presidential entourage booked 110 rooms at the hotel. In 2008, an extension was made and seven floors became twelve, increasing the number of bedrooms from 240 to 272. The extension was designed by Robinson Patterson Partnership, now RPP Architects and was completed in late 2008.

The Most Bombed Hotel in the World:

It was named as The Most Bombed Hotel in the World, as we said before, due to the fact that it was bombed more than 36 times during the trouble in Belfast. The Europa Hotel was fantastic from inside but outside the city turned into a war zone. Instead of a place for tourists and travellers, it became a home of for journalists who had been sent to cover the Troubles in Belfast at the time.

During the first three years after its opening, the Europa Hotel suffered from extensive damage caused by more than 20 bombs. A permanent notice was attached to each bedroom door warning that because of the civil unrest in Belfast, guests may have to speedily evacuate the building.

Many journalists talked about the Europa Hotel like former BBC journalist John Sergeant who called it “a big modern hotel with no normal clients”. The late Simon Hoggart, of the Guardian, described it as “a headquarters, a training school, a private club and only marginally a hotel … Everyone came to the Europa – the press mainly, but everyone else came because of the press. If you were a politician, or a soldier, or even a paramilitary, you knew that was where to put the word out. It was the information exchange.”

Also, another person who witnessed the Troubles in Belfast and especially in the hotel was retired bar manager Paddy McAnerney who remembered the period well. He started working at the hotel in the early 1970s. “Oh yes, this was the centre for the press Kate Adie, Trevor McDonald, Richard Ford – I looked after all those highfalutin’ press people,” McAnerney recalls. “If there was an incident, some of the journalists had an unofficial rota: only one or two would go out and report back, then 10 or 12 of them would write up the same story in different words.” 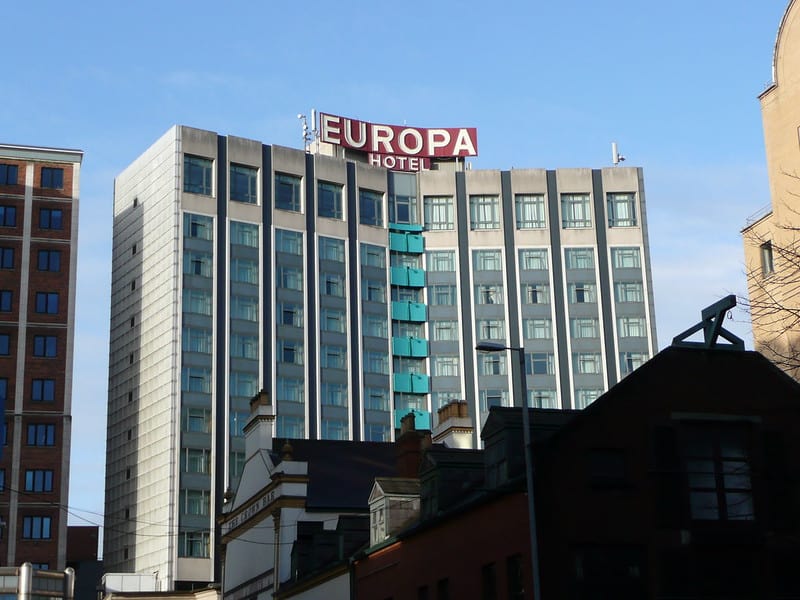 The Europa Hotel in the modern age (Source: metro centric)

The Irish Times entire Belfast desk moved to the Europa after a huge car bomb wrecked the paper’s base on Great Victoria Street. “The five of us on the premises had to run past it when we got the army warning, which was shouted up from the street,” recalled journalist and former Northern editor Renagh Holohan, some years later. “It destroyed all the buildings, including our offices. So for a couple of months during the summer of 1973, The Irish Times moved into the Europa Hotel.”

The Europa Hotel was a target for the Irish Republic Army (IRA) because of its high visibility as a landmark, symbolizing investment in the city. Although the press corps was staying there, the hotel was attacked many times. “The windows were blown out on a weekly basis,” McAnerney said. They called the Europa “Hardboard Hotel” due to the fact that there was a standing order with a warehouse that had every pane of glass duplicated or triplicated, so they could be immediately replaced, as the windows got blown numerous times, the steel frames got warped, so they had to cover them up with hardboard instead. During the general strike by the Ulster Workers Council in 1974, in protest against the Sunningdale power-sharing agreement, the electricity supply was cut and the city was plunged into darkness.

In spite of what was happening in Belfast and in the Europa Hotel, everything was operating as normal inside the hotel as the drinks continued to be served, but by candlelight, while the chef worked on his soup in the fire in the yard behind the hotel. Bedclothes and linens were taken out of the hotel and brought to the nuns at Nazareth Lodge, on the Ormeau Road, to be washed in their laundry which had its own generator.

In December 1991, a 1,000lb bomb exploded in Glengall Street, beside the hotel, causing extensive damage, and a repair bill of around £3 million. Eighteen months later, in May 1993, another bomb went off, blowing a vast hole in the left side of the building, and wrecking the Grand Opera House next door. “When I stood at my desk in the lobby, I could look straight through and see the Opera House stage,” recalls Martin Mulholland.

After all that the hotel was bought by the Hastings Hotel Group with a very low price, and the building was really destroyed and it was closed for six months for a complete refurbishment. 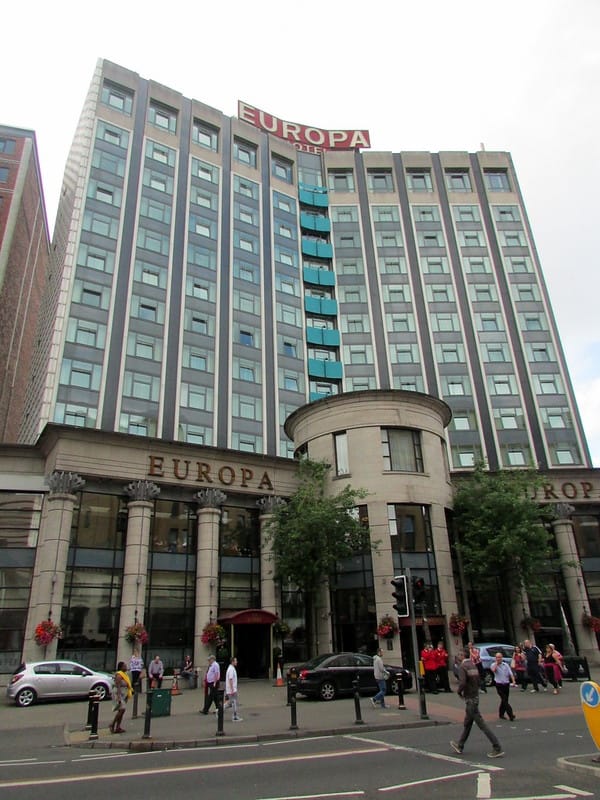 Things to do in the Europa hotel:

The Causerie is perfect for a catch-up with friends before a concert, with the pre-theatre menu or a bite of supper after a business meeting. Located on the first floor, with great views overlooking Great Victoria Street, it is surely one of the best locations to eat out in the city. The restaurant provides visitors with high-quality food, using the freshest seasonal and local produce. It is a nice place to enjoy a range of dishes prepared in the traditional method, and some of the dishes that you can try there are Glenarm Organic Roast Salmon, Northern Irish Dexter Sirloin Steaks & a Malai Curry. The Causerie Restaurant contains dedicated brigade of chefs and a keen front-of-house team, who work together to bring you the very best of Northern Irish produce in a relaxed yet efficient manner.

The Piano Lounge located on the first floor, where friends can have gatherings, couples can go out for the night. During the day, the Piano Bar serves tea and coffee with a complimentary homemade traybake, it could be a piece of Rocky Road – a wonderful chocolate creation studded with marshmallows – or some shortbread, an oaty flapjack or caramel bar. In the evening, you can enjoy a cocktail or two, and there’s a full bar service here too for spirits, beers, and wine.

The Lobby Bar in the Europa hotel is a popular spot with Belfast residents and hotel guests, which is located on the ground floor. The bar is a relaxing place to be where you can enjoy a drink and sample from the tasty bar menu featuring all your favourite foods. Jazz sessions take place on Saturdays, adding to this tempting offering.