The Baron Empain Palace is well known historical Hindu-style palace in Egypt, which is located in Heliopolis district, a suburb northeast of central Cairo, Egypt. The palace was designed by an architect named Alexandre Marcel who designed the palace to have a rotating base in order to access the sunbeams at all hours of the day. The palace was decorated by Georges-Louis Claude. Inspired by the Hindu temple of Angkor Wat in Cambodia, it was built between 1907 and 1911.

Who is Baron Empain?

The idea behind the Palace came to be when Baron Empain, a Belgian industrialist and colonial entrepreneur millionaire whose full name is Édouard Louis Joseph Empain, arrived in Egypt and took on many projects to implement in Cairo, including the settling and formation of Heliopolis and also to rescue one of his Belgian wife’s development projects; the construction of a railway line linking Al-Matariyyah to Port Said. In 1907, they began building the new town of Heliopolis in the Sahara desert ten kilometres from the centre of Cairo. In the middle of hotels, wide roadways, a golf course, and other grand amenities, the Baron commissioned the construction of his own personal palace. Baron Empain called Heliopolis a “city of luxury and leisure”.

The Baron used to travel a lot to many places, but in India, he was inspired mostly by the Hindu temples of Orissa in India and Angkor Wat in Cambodia. Empain loved Egypt so much and made a fateful decision to stay in Egypt until his death. He wrote in his will that he wants to be buried in Egypt even if he passes away outside of its borders. He was named Baron or held the title of Baron when he was awarded it by the King of France in appreciation of his efforts in building the Paris metro.

Empain was a distinguished engineer. He also considered establishing a metro line within the neighbourhood to attract the largest number of Egyptians to live in this new suburb, where he commissioned the Belgian engineer, André Barcelona, who was working at that time with the Paris metro company to create a metro line linking the neighbourhood or the new city to Cairo. 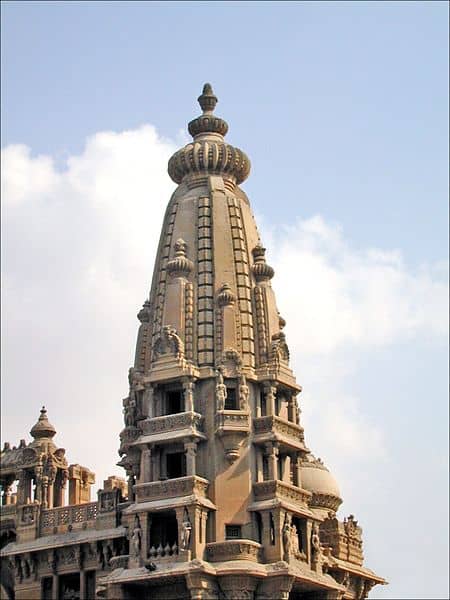 The Tower of the Baron Empain Palace. (Source: Jean-Pierre Dalbéra)

Heliopolis contains many exciting places like Heliopolis club which is one of the most luxurious sporting clubs in Egypt. It was established along with Heliopolis in 1905. Also, it contained the Merryland; a well-known recreational park, which had its own lake and was at the height of its elegance in the 1960s and 1970s. It now contains a small amusement park and other sporting clubs, such as El Shams Club which is the biggest in size and number of members. There was Luna Park, Africa’s first amusement park and after that, the grounds were converted into an Australian field hospital just after the onset of World War I.

Additionally, Heliopolis was where the former president of Egypt Mohamed Hosni Mubarak resided. In 1981, the site of the Heliopolis Palace Hotel became the Egyptian Republican Palace and the president’s office. Also, it contained a tram system that served Heliopolis and its surrounding areas, but it was closed and some parts were removed in 2015 due to the new underground system that connects it with other important residential areas around Cairo. Metro stations were built in several major areas of Heliopolis, such as El-Ahram street, El-Marghany street with a plan to extend the line to include other stations, including Nozha and Cairo International Airport. The Heliopolis/Airport extensions of Line 3 are expected to be completed by the end of 2018. 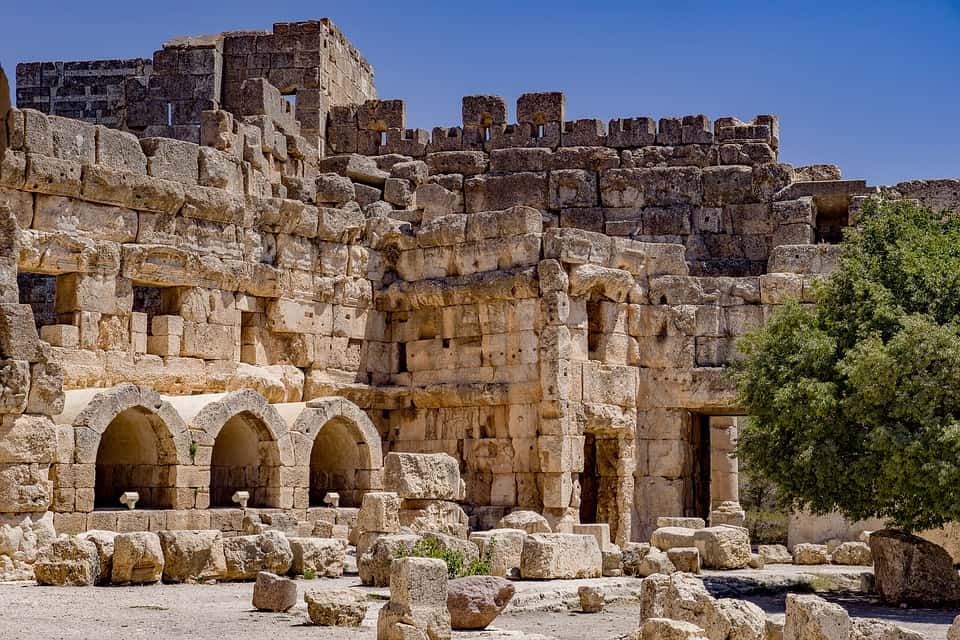 One of the well-known landmarks in Heliopolis is the Catholic Basilica church on Al-Ahram Street, and it is also the burial place of the Baron Empain himself. The location also includes many places of worship, including numerous mosques, Saint Mark’s Church on Cleopatra Street, and the Saint George’s church in Heliopolis Square.

Heliopolis was merely a barren desert before the Baron Empain Palace was built, until Empain presented to the Egyptian government the idea of establishing a neighbourhood in the desert east of Cairo, and chose the name “Heliopolis”, meaning the city of the sun.

Due to the Baron Palace, which is a popular landmark of curiosity, legend, and Egyptian history, Heliopolis became a famous suburb in Cairo and also an elite district of Cairo.

Heliopolis was established in 1905. It is considered one of the more affluent areas of Cairo.  A side of the Baron Palace, one of the famous places in Heliopolis is the Heliopolis War Cemetery on Nabil el Wakkad Street. This cemetery contains the Port Tewfik Memorial, a memorial to over 4000 soldiers of the British Indian Army who fell in World War I, which was originally in Port Tawfiq but was later moved to Heliopolis after its demolition in the 1970s. After the 1952 revolution, it became home to much of Cairo’s educated middle class. As Cairo expanded over the decades, the once vast distance between Heliopolis and Cairo vanished and it is now well within the borders of the city. Because of the large increase in the population, the original gardens that filled the city have mostly been built over.

In 2005, the palace of Baron Empain was bought by the Egyptian government, but sadly it remained closed ever since. There were many hopes that the Palace would be repaired by the government but it stayed closed without explanations. The building was home to stray dogs and thousands of bats, although there have been reports of satanic rituals taking place at night, which made people afraid to come near it.

To reach the palace, visitors had to walk through lush terraces, each with its own exotic statues amid colourful vegetation. The exterior is covered with statues of Hindu deities, mythical creatures and elephants.

The interior became bare, but once was ornamented with frescoes, gilded doors and Belgian mirrors designed by Georges-Louis Claude. However, they were looted long ago. Beneath the palace are underground

The palace’s main tower, in which Empain had his rooms, is said to have been built on a revolving base to allow a 360-degree view and constant sunlight.

The architectural beauty of Empain’s palace is in stark contrast to his tragic personal life. Distraught by her husband’s affairs, Baron Empain’s wife Helena eventually fell to her death from the revolving tower. The couple’s daughter Merriam was plagued by psychological problems and would sit for hours in one of the basement rooms when she was in a bad mood. It was this chamber in which she too was found dead, just a few years after her mother’s death.  Although the Baron was plagued with his own health problems, having to walk with a limp and suffered from epilepsy, which led him to succumb to regular seizures in the gardens of his palace, he returned to Belgium during the outbreak of the World War I and survived until 1929. Baron Empain’s son lived in the palace after his father’s death, but by the outbreak of the 1952 revolution, the estate had been sold.

The Reopening and Restoration of the Baron Empain Palace:

Finally, after being closed for two years for restoration that cost about 100 million Egyptian pounds (about 6 million dollars), the palace of Baron Empain in Heliopolis has regained its former glory and was officially inaugurated by President Abdel-Fattah Al-Sision the anniversary of the June 30 Revolution, as a tourist destination and a venue for exhibitions on the history of Heliopolis and restored life to one of the most distinguished archaeological sites in Heliopolis. The Armed Forces Engineering Authority was carrying out the restoration.

The project consisted of reinforcing the ceilings, restoring the marble columns and frescoes above the main entrance as well as decorative elements like statues and sculptures, and shoring up doors and windows.

The tour of the palace takes 45 minutes, and the Tourism and Antiquities Ministry has set a limit of 900 tickets, or 100 visitors a day, until mid-July, after which the limit will be 700 visitors and visiting times will be from 9:00 am to 4:00 pm. The fee of the entry ticket is priced to be affordable to almost everyone, that being L.E 100 for foreign visitors, L.E 50 for foreign students, L.E 20 for Egyptians, and L.E 10 for Egyptian students. All elderly Egyptian visitors 60+ years will be exempted from the entry fee.

The Ministry of Tourism and Antiquities, in cooperation with the Belgian Embassy in Egypt and the civil society associations, has turned the palace into an archaeological gallery to retell the history of the Heliopolis district. Some works have been added to the site, such as the completion of the fences and the development of the rear garden. The exhibition inside the palace tells the history of the Heliopolis neighbourhood, through a variety of photos, archival documents and illustrations, maps and special correspondence letters depicting the history of Heliopolis district in different eras. 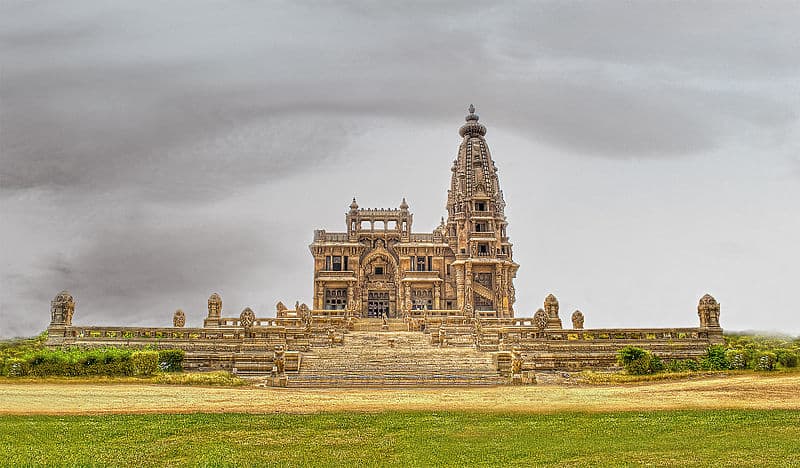 This post first appeared on Connolly Cove Ireland Travel, please read the originial post: here
People also like
16 of the Most Famous Architects Who Ever Lived
The key factor holding up Nathan Ake’s return to Chelsea