Bram Stoker is arguably one of Ireland’s most famous authors, and he is known worldwide for his creation of the mythical monster Dracula. Throughout, and after, his life he received a lot of appreciation for his literary work. There is the Bram Stoker Hotel in Dublin, and a literary award has been named after him, an award given for superior achievement in horror writing and dark fantasy.

Joseph Sheridan Le Fanu: Father of t…
Domestic flights granted to 11 more a…
Peter Dinklage and Jason Momoa Unite …
My Most Anticipated Retellings From J…
4 Things That Shocked Me About Transy…

Continue reading to discover more about Bram Stoker, his life, and his novel Dracula. 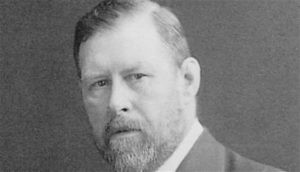 Abraham Stoker was born in Clontarf, Dublin, on 8 November 1849. He is remembered mainly for his creation of the monster Dracula in his novel “Dracula” written in 1897. He was named after his father, Abraham, and his mother’s name was Charlotte Mathilda Blake Thornley. The young Stoker attended a private school run by Reverend William Woods, and he suffered with long-term illness and miraculously recovered before starting school at the age of seven.

He later attended Trinity College, Dublin, and received his Masters degree, here he became aquainted with Oscar Wilde. While studying he excelled at many sports and was named University Athlete, he became the auditor of the Historical Society, and president of the Philosophical Society.

In 1878, Bram Stoker married Florence Balcombe. She was formerly matched with Oscar Wilde and was the daughter of Lietenant Colonel James Balcombe. She is best-remembered for her legal disputes in 1922 over the unautherised film Nosferatu, based on “Dracula”.

They had one child, a son named Irving Noel Thornley Stoker on 31 December 1879.

After his family moved to London, Bram Stoker became the business manager of the Lyceum Theatre. He remained in his position for 27 years. While working for the most famous actor of his time, Sir Henry Irving, Stoker had the opportunity to travel with him and experienced many countries around the world. He even visited the White House and knew William McKinley and Theodore Roosevelt. 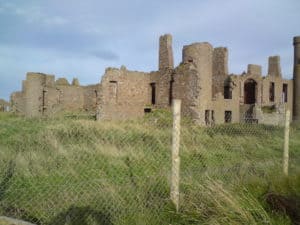 Between 1893 until 1910 Bram Stoker became a regular visitor to Cruden Bay. While holidaying here, Stoker found lots of time to focus on his writing and even set two of his novel in this coastal village: The Watter’s Mou’ and The Mystery of the Sea. It is also believed that he based Dracula’s castle on Slains Castle. One of the many hotels he stayed in was The Kilmarnock Arms Hotel, and his signature in the guest book remains there.

Bram Stoker died on 20 April 1912, the cause of his death is debated. He suffered from many strokes but some think it was due to tertiary syphilis, and others believe it was due to overworking. He was cremated and his ashes are at Golders Green Crematorium, London. His son’s ashes are with him. His wife’s ashes were supposed to be, however, instead Florence’s ashes were scattered at the Garden’s of Rest. 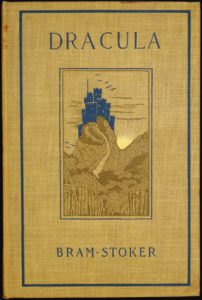 “Dracula” was Bram Stoker’s 5th and most famous novel. His memorable character is still used to, for example, in Hotel Transylvania.

The novel is a gothic novel published in 1897, it follows Count Dracula and his ambition to move from Transylvania to England and spread the undead curse.

Bram Stoker dedicated this novel to Hall Caine, one of his closest friends. Parts of the novel is set in the town of Whitby where Stoker spent many of his summers, and Sir Henry Irving was Bram Stokers inspiration for his character Count Dracula.

Count Dracula is the main character within Stoker’s tale. He is a nobleman of Transylvania who wants to move to London. He is a centuries-old vampire and lives in a crumbling castle in the Carpathian Mountains. He can transform into animals, control the weather and is stronger than over 20 men. However, his powers are limited, he is powerless in daylight, cannot cross water unless carried above, and he cannot enter a house unless invited in by the owner.

Van Helsing is a Dutch professor who is described as “a philosopher and metaphysician, and one of the most advanced scientists of his day”. He is called upon to cure Lucy Westenra. His scientific help and contributions play an essential role in fighting against Dracula. He is knowledgeable in vampire folklore and becomes the leader of the group hunting Dracula down.

Jonathon Harker is a lawyer who is sent to deal with the real estate transaction with Dracula. However, upon arrival he finds himself a prisoner in Dracula’s castle. Throughout the novel he shows a strong will to learn about his captor and escape the castle. To conclude, he becomes a brave and fearless fighter.

Miss Mina Murray is the fiancée of Johnathon Harker and a school teacher. Whenever Jonathon escapes she travels to meet him. She is also the best friend of Dracula’s first victim, Lucy Westenra. Throughout the novel she proves herself to be the heroine. She embodies purity, innocence, and Christianity, the polar opposite of Dracula himself. Her research leads Van Helsing and his men to Dracula’s Castle.

Lucy Westenra is the first victim of Dracula. Under Dracula’s spell she becomes a vampire, and this compromises her chastity and virtue. However, whenever Van Helsing and his men find and destroy Dracula (ie her creator) she is restored to her human self.

John Seward is a former pupil of Van Helsing. Within the novel he is a Doctor and the administrator of an insane asylum which lies near Dracula’s home in England. Throughout the novel we see him conduct interviews with Renfield, one of his patients. His aim from these interviews is to understand life-consuming psychosis. Lucy was his love interest, however, she refused his proposal. He still loves her throughout and dedicates himself to her whenever she falls ill. After Lucy dies, he dedicates himself to the fight against Count Dracula.

Arthur Holmwood is Lucy’s fiancée. He is the son of Lord Godalming and he inherits his fathers title when he dies. He is the first to offer Lucy a blood transfusion and agrees to kill her.

Quincey Morris is an American suitor of Lucy. Within the novel he proves himself to be brave and good-hearted. He does not get jealous of Arthur Holmwood whenever he wins Lucy’s heart. In the end, he sacrifices himself to help defeat Dracula.

Renfield is the only patient within the insane asylum that we see. He is a refined gentleman, however, he has a habit of eating living animals. He believes that they will give him strength.

Mrs. Westenra is Lucy’s mother. Within the novel we see her struggle with her ill health. She interferes with Van Helsing’s remedies which unfortunately impairs Lucy’s safety. She dies of shock when a wolf leaps into Lucy’s bedroom window.

The prequel to “Dracula” is called “Dracul”. “Dracul” was published on 2 October 2018. It was co-written by J.D. Barker and Bram Stoker’s great-grand nephew Dacre Stoker.

Before the publication of the original novel “Dracula”, Stoker had to cut out over 100 pages of the preface. In search to find these missing pages, J.D. Barker and Dacre Stoker created “Dracul”. This prequel explores the origins of both the author, Bram Stoker and of the creation, Dracula. As Stoker claimed in his original text, the story is all true.

This sequel was also written by Dacre Stoker, along with Ian Holt. It was published on 24 September 2009. This novel was an attempt by the Stoker family to regain control over Dracula fiction.

This story takes places in 1912, 25-years after Dracula’s death. The novel follows Quincey Harker, son of Jonathon and Mina. He leaves law school to pursue London theatre. He finds himself at the Lyceum theatre where Bram Stoker is having trouble creating the play of Dracula. Quincey begins to unravel his parents secrets, and one by one all those who defeated Dracula are being tracked down, perhaps by Dracula himself.

Throughout all these years there have been many movies about Stoker’s monster. Look here to discover all the Movies and Television shows which contain the famous monster.

In 1992 “Bram Stoker’s Dracula” was released. This follows the orginal novel written by Bram Stoker in 1897.

There is an annual festival in Dublin honoring the author Bram Stoker, and in 2014 there was a 3 day festival filled with literature, film and outdoor events all around Dublin. These yearly festivals are supported by the Bram Stoker Estate.

In 1987 the first Bram Stoker Award was presented. This award is named in honor of the Gothic writer and is awarded by the Horror Writers Association for “superior achievement” in dark fantasy and horror within literature.

There is a hotel in Bram Stoker’s homeplace, Dublin, named after the famous author called The Bram Stoker Hotel. Also in Dublin, you will find the Bram Stoker’s CASTLE DRACULA Experience. This is a thrilling attraction in the heart of Dublin, where you can meet the characters from the original novel.

In 1879 founded the Dublin Sketching Club

He is a Scorpio

In 2012 Google honored Bram Stoker’s 165th Birthday with a doodle on it’s homepage, see it here.

Have you read Bram Stokers original Dracula, or seen any adaptions? Tell us in the comments below!

If you enjoyed this article about Irish Author Bram Stoker and his famous novel Dracula, please read more of our blogs about famous Irish Authors: