What You Need to Know for a Weekend in Glasgow, Scotland 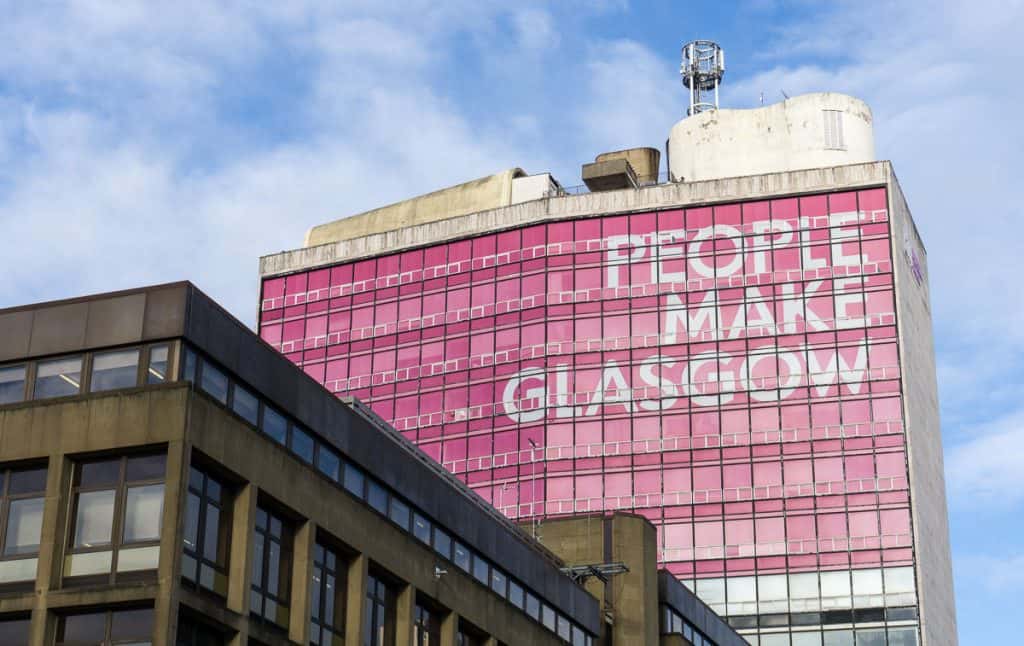 I should probably start this off by stating that I’m a little embarrassed to admit that despite living in Scotland for over 2.5 years in total, I’ve never spent any quality time exploring Glasgow and all it has to offer. Oops. But now I can finally say that’s changed!

Living in Edinburgh, the capital of Scotland, has always provided me great cultural experiences through all the festivals on offer, the beautiful architecture to admire and lovely hidden gems to discover. However, I’ve continuously heard the rumour that Glasgow offers something both a little more, and different. More culture, more nightlife, and different things to see and do. And now I can confirm the rumours are true!

Some might say that Glasgow plays second fiddle to Edinburgh as the must-visit city in Scotland, but I would have to say they’re mistaken. When you get down to the heart of it, Glasgow and Edinburgh are two very different cities, offering alternative Scottish city experiences. Edinburgh is more of a tourist hub, with its Castle and grand old architecture, and Glasgow has more grit and edge as a result of its industrial past. Depending on what you’re looking for when you visit Scotland, you might find yourself drawn to either Edinburgh or Glasgow, and if you plan it right, you can appreciate both!

Most people who visit Scotland are trying to cram in as much as possible to a short itinerary and might end up only skipping through Edinburgh or Glasgow to get to the highlands and islands. Of course, these areas of Scotland are beautiful and dramatic, but there’s a lot to see and learn from visiting the cities of Scotland too.

So let’s say you have just a weekend in Glasgow, or 2-3 days to do the must-see Glasgow attractions. What exactly is it that makes this city a contender for the best in Scotland? If I was planning your Glasgow itinerary, this is the highlights that would be on it! 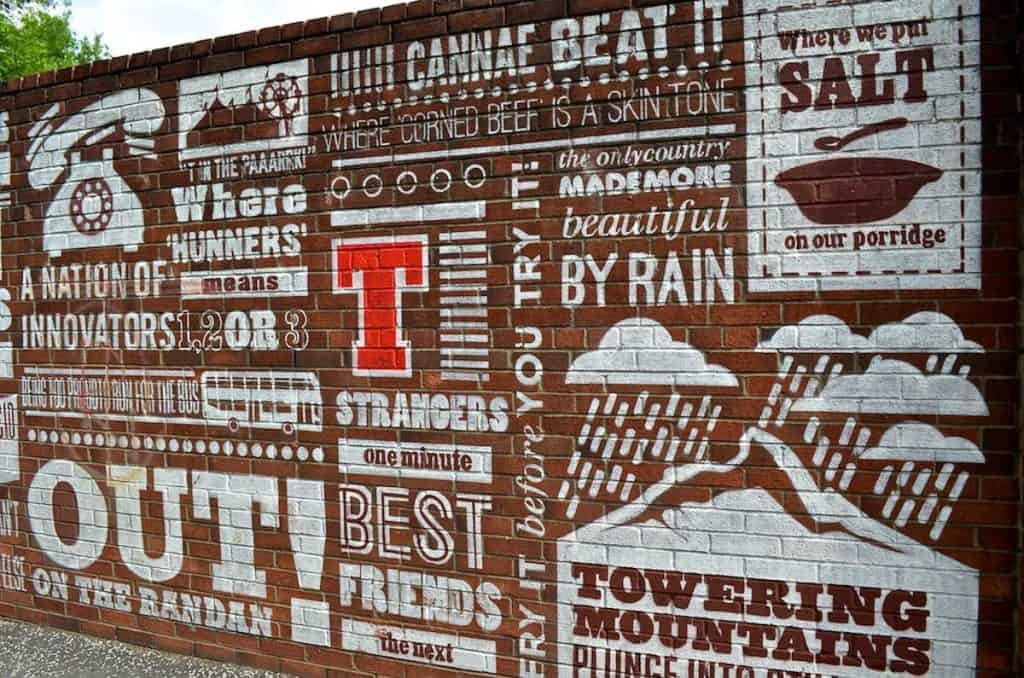 Arguably the best museum in Scotland, the most visited museum outside of London, and my new favourite. The Kelvingrove Art Gallery & Museum has 22 galleries and over 8000 objects covering everything from art to animals. The museum was first opened in 1901 and was renovated and reopened in 2006. There’s no theme as such, with the different galleries offering glimpses into Glasgow and world history, rare and unique artworks. I mean, they have a Spitfire hanging from the ceiling in one gallery and an installation of floating heads in another. Basically, there’s something for everyone!

While you’re there, you can explore the vast Kelvingrove Park that surrounds the museum. It’s a classic Victorian park with many paths to walk and cycle along the banks of the river.

Read More: 21 Free Things to Do in Glasgow 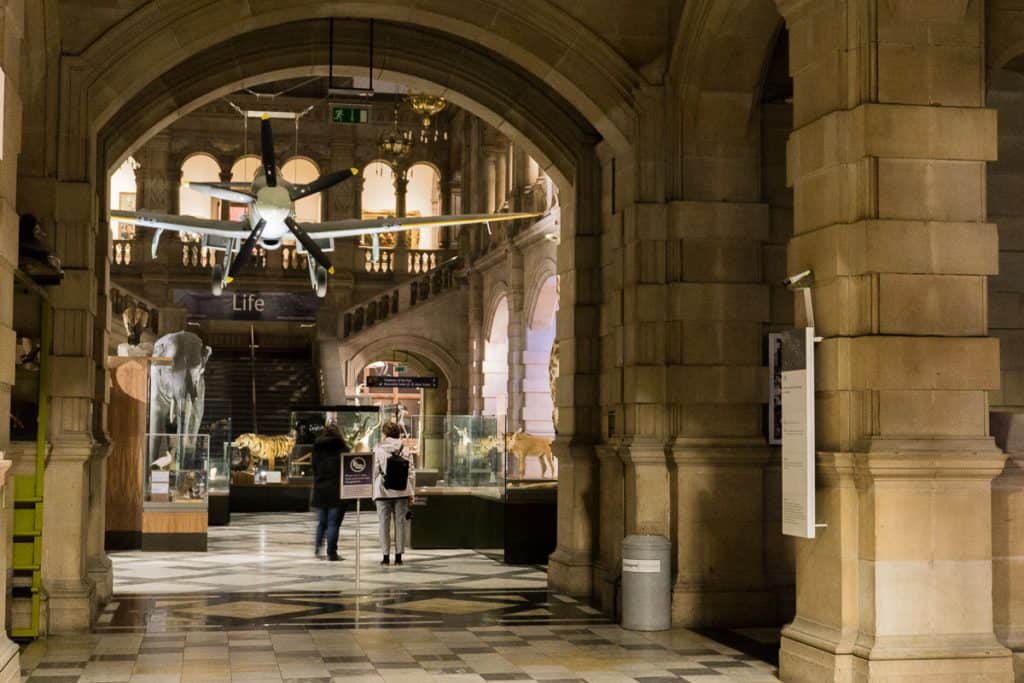 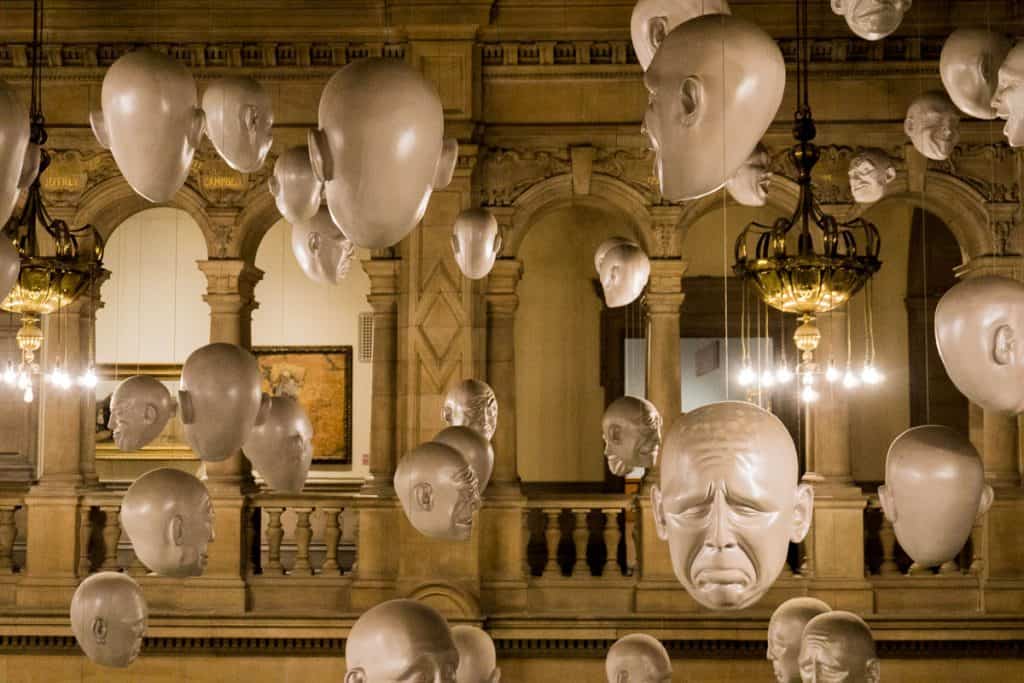 The West End of Glasgow is home to Kelvingrove, the University of Glasgow, boutique shopping, and some of the cities best restaurants and bars. It’s basically THE vibrant and hip place to be. Head over this way in the evening if you’re looking for something to eat.

The University of Glasgow is worth a wander to see some of it’s more Harry Potter-esque buildings. It’s one of the top universities in the world and the 4th oldest English speaking university, and home to the Hunterian Museum, which includes historical artifacts, an anatomy museum and an art collection by Glaswegian artist and architect, Mackintosh.

Afterwards, journey over to the Hidden Lane, a collection of over 100 studios housing local creatives who also sell their goods. You’ll find musicians, craftspeople, writers, and designers. Visit the tea room if you’re a bit peckish!

As part of a regeneration project, the Glasgow City Council embraced street art. It decorates what would be otherwise blank walls and vacant buildings. You’ll easily spot a range of murals as you walk about the city, but if you want to take a more in-depth tour then either download a free map or take a comprehensive tour with Photo Walk Scotland to learn more about the murals as you go. 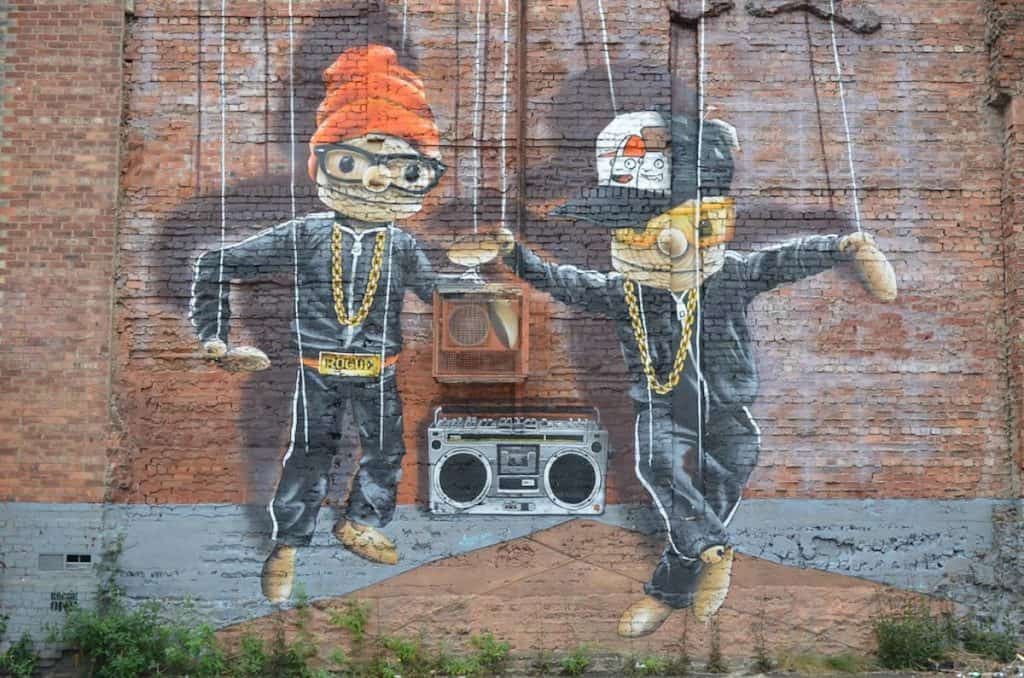 The brand new Clydeside Distillery, opened in November 2017, brings whisky distilling back to Glasgow. At one point, Glasgow was a huge industrial hub that saw Scotch Whisky transported all over the world, and this area was one of Glasgow’s most famous shipping ports. The Clydeside Distillery is built in what was once the Pump House of the Queen’s Dock. You can learn more about Glasgow’s industrial past and do a whisky tasting. Since whisky can’t be classed as such until it is aged for at least 3 years, you won’t be able to taste the Clydeside Whisky for a few more years, but they do a great job of educating you about the different types of whisky all over Scotland in the meantime. 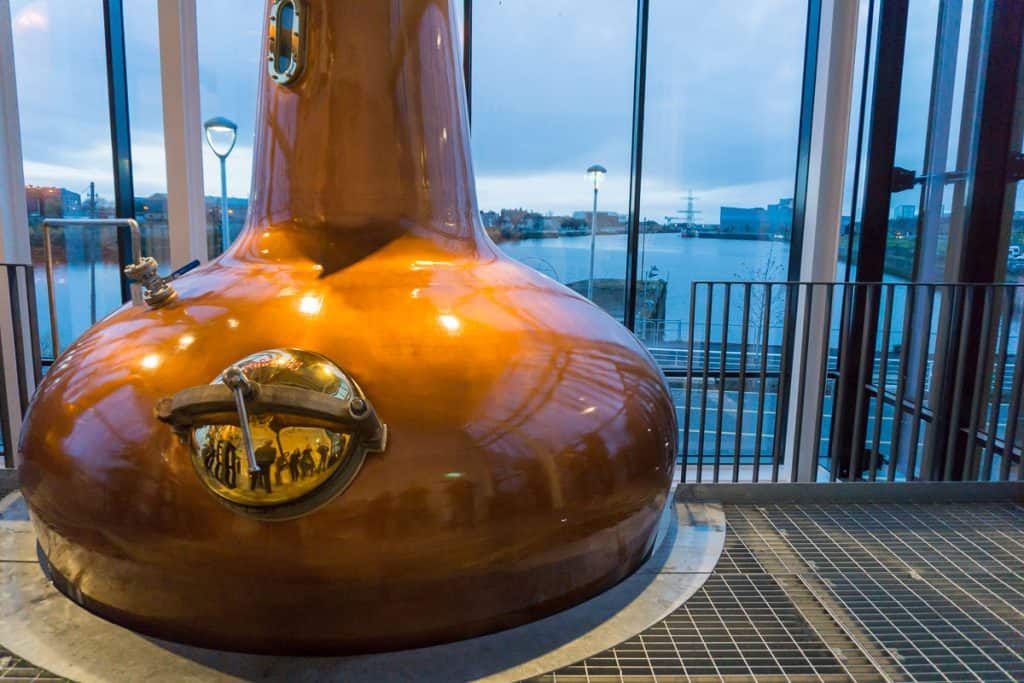 The Riverside Museum of Transport & Travel

This award-winning museum has displays of everything transport related you can think of, from trains to skateboards. It also has a replica of what a Glasgow Street and shops would have been like from 1895 until the 1980s. It’s located on the banks of the river Clyde, and behind it is the Tall Ship, one of only 5 Victorian sailing ships still afloat today.

Learn more about one of Glasgow’s famous sons

Charles Rennie Mackintosh was born and lived for most of his life in Glasgow, and has had a profound impact on the city, even if you don’t realise it at first! His early work was mostly architecture related, and he designed buildings right down to the furniture they would have inside. The Glasgow School of Art is seen as his magnum opus, or greatest work. It took over 10 years to build the complete design. You can now take a tour with current students to learn more about it, although a fire in 2014 means that some of it is closed while renovations take place.

The Lighthouse, formerly the Glasgow Herald offices, is another of Mackintosh’s designs. It’s now Scotland’s Centre for Design & Architecture. It includes a full Mackintosh Gallery that’s a great starting point to learn more about his unique designs. You can also climb the tower to have a view over Glasgow.

If music is your thing, then Glasgow is where it’s at. With over 130 live music sessions taking place a week, it’s no wonder that people say Glasgow is an awesome night out. As well as standard pubs and bars, there are some great venues around the city. Barrowland Ballroom is often voted the most popular venue to perform at by artists, then you have the larger SSE Hydro, and smaller venues like St Luke’s a converted church that now houses everything from gigs to weddings and political meetings, and has it’s own bar and restaurant attached.

The Celtic Connections Festival takes place every year in January/February and has done so for the last 25 years. It draws artists and viewers from all over the world and takes place in venues all over the city. A great excuse to visit in what would otherwise be the quieter colder months! 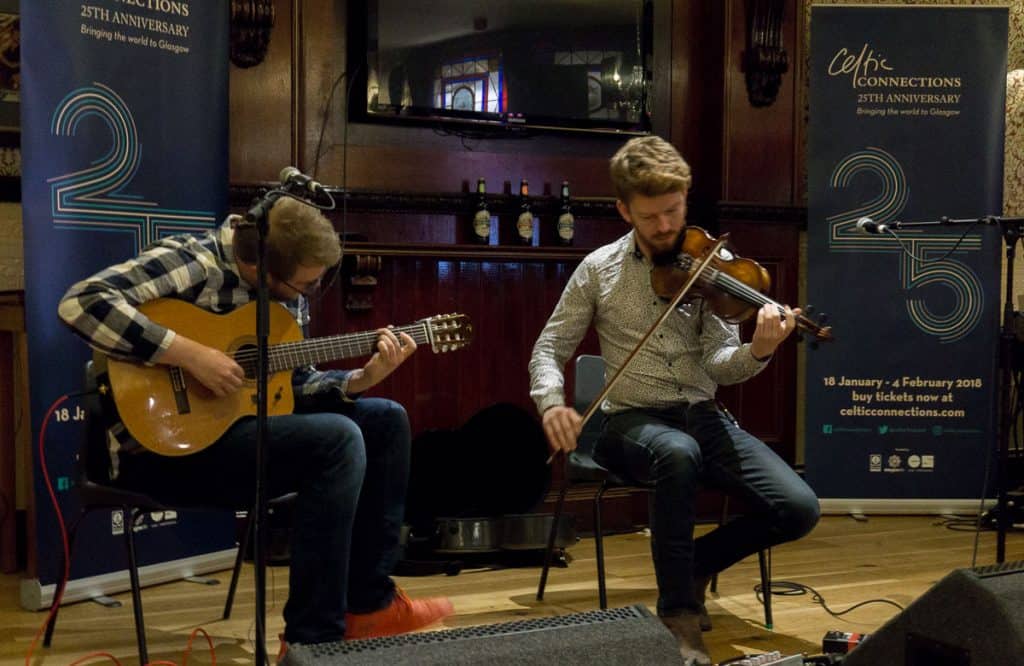 You can learn more about the Glasgow music scene on the Glasgow Music City Tours. They offer two different tours that concentrate on either the city centre or the iconic Merchant City and East End. If you have a small group they’ll also tailor-make a tour for you. I took a tour with Fiona who was so knowledgeable and had plenty of interesting tidbits to share about Glasgow and music, and I’d really recommend it if you’re considering Glasgow tours.

Merchant City also contains a number of great bars and restaurants, and is another place to grab a bite to eat. 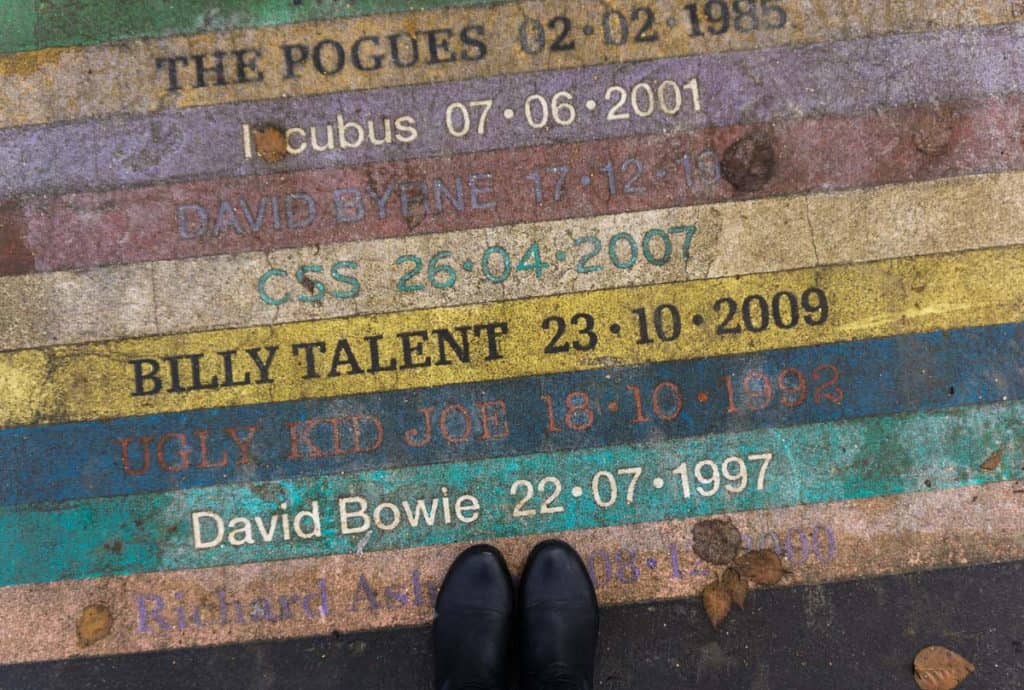 Tennents is a Scottish lager that’s been in production since 1885. You can tour the home of Tennents and learn more behind the scenes of one of the countries most-loved brands.

There’s also a Tennent’s Training Academy that runs hospitality courses both for training purposes and for fun. Take a beer tasting masterclass for something more traditional, try one of their cooking masterclasses, or better yet, attend the Wellpark Brewery on a Friday night for one of their Cook, Curry, and Comedy nights, where you’ll learn how to make the perfect curry, and then enjoy it with some beer and comedy! 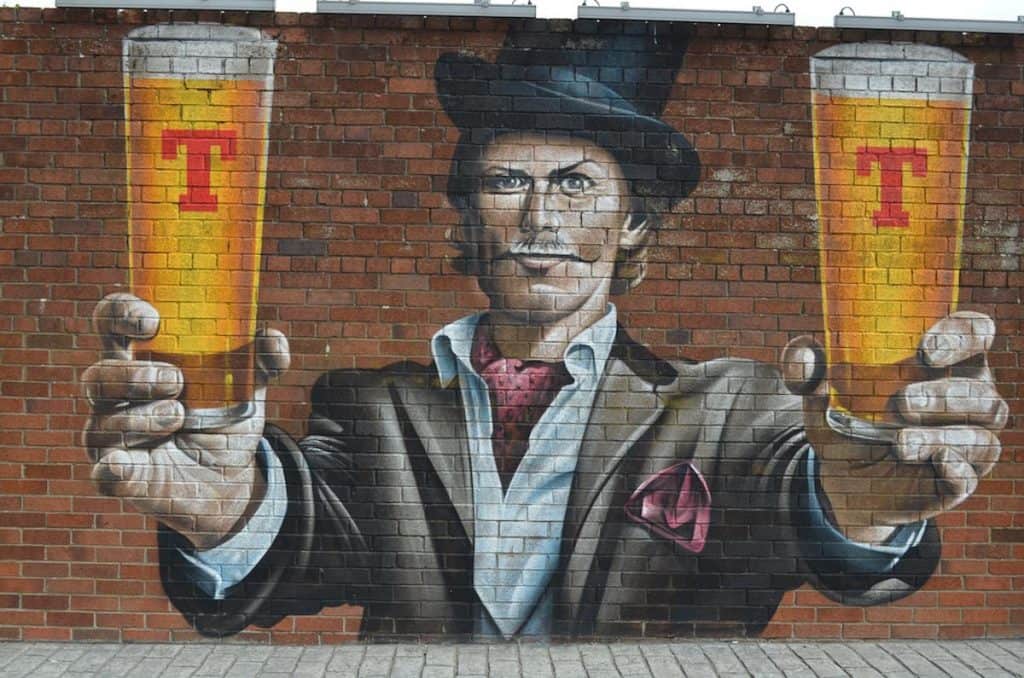 If you’re looking for even more things to squeeze into your Glasgow weekend itinerary, then check out this list of 21 free things to do in Glasgow!

How to get around:

Glasgow is much bigger than Edinburgh, where everything is very walkable. Although nothing on this list is too far to walk, it can be up to half an hour or 40 minutes between some destinations and if the weather is chilly or rainy, or you’re just not up for the walk, then you need another way to get around.

The open top City Sightseeing bus is a great way to get around Glasgow’s best attractions, with informative commentary to listen to in-between. If you’re spending 2 days in Glasgow, a 2-day ticket will cost you just £15 and will make it easy for you to get from place to place. There’s also a one day option, or a 2 days subway/bus option.

Glasgow has both a subway and public bus system which you can also use. The subway is useful for getting around the city centre and the west end and tickets start from £1.40. First Bus is the bus company in Glasgow, and you can use their journey planner here.

Nextbike Glasgow has over 400 bikes around the city available for hire 24/7. You rent it via their app, and the price starts at £1 for 30 minutes.

Spending two or three days in Glasgow will give you enough time to see the premier attractions, and learn a bit more about what makes this city tick. Glasgow is a great weekend away or city break from elsewhere in the UK or should be an exciting addition to any Scotland itinerary. With 2018 seeing the 25th anniversary of the Celtic Connections Festival and being designated the Year of Young People in Scotland, expect plenty of awesome experiences to be added to the city’s calendar and give you even more things to do in Glasgow!

I was invited to spend a weekend in Glasgow with Visit Scotland, learning more about what’s coming up in for the city in 2018. As always, all opinions are my own.

If you liked it, pin it! 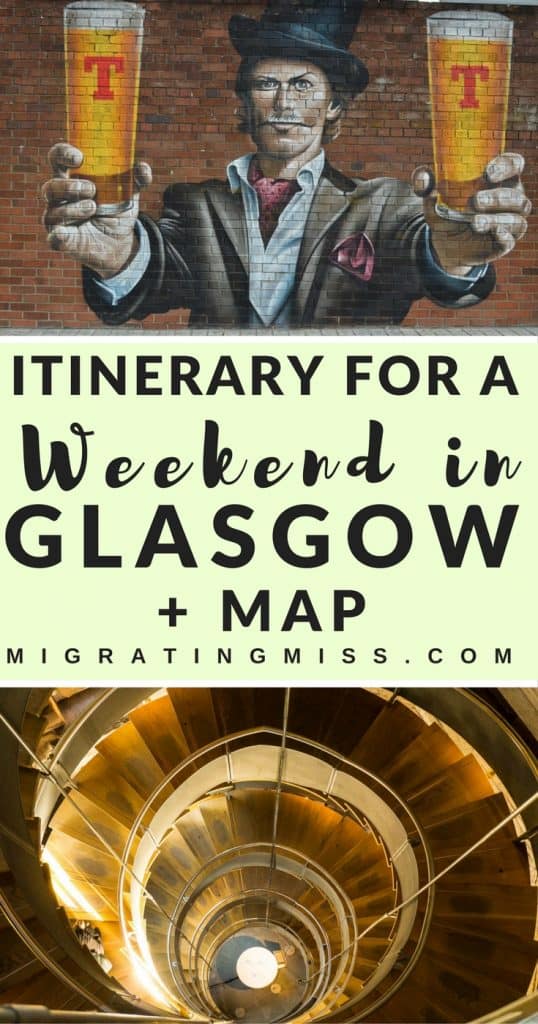 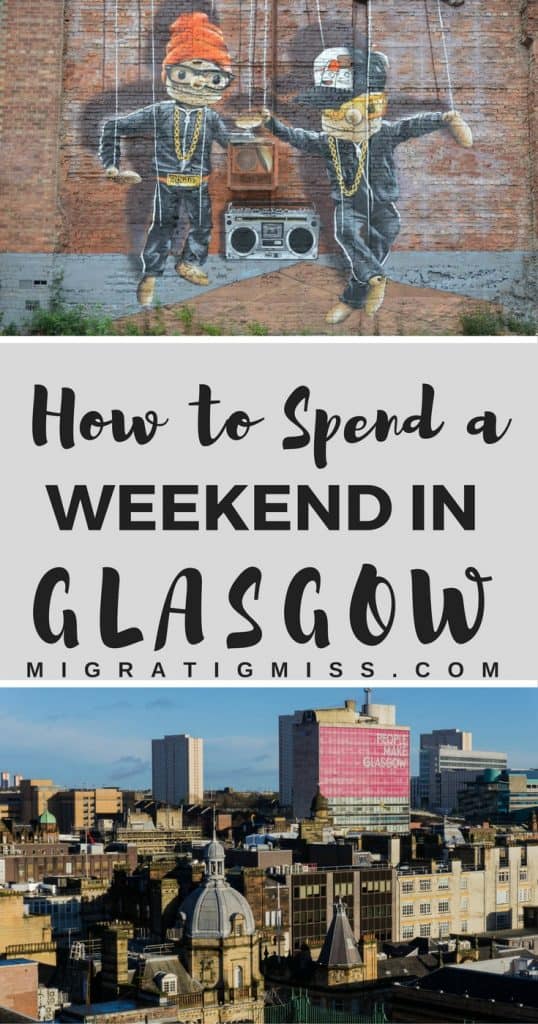 The post What You Need to Know for a Weekend in Glasgow, Scotland appeared first on Migrating Miss.

Faces in the Crowd: Moondog

What You Need to Know for a Weekend in Glasgow, Scotland