Most visited Pilgrimages in India

India is also known as “land of Gods and Goddess”. People of various regions lives and they worship according to their religion. Maximum population of India is Hindu and they offer their prayers in Temple. There are lots of mosque, church, gurudwara (place of worship for Sikhs) in all over India. Daily number of devotee visits these pilgrimages and offers their prayers. In India each and every home has little space for worship but still there are countless temples and other religious places. According to a Tamil proverbs “Don’t live in a place where there is no temple”. So each part of India is having number of religious places with significant importance. It’s very difficult to count number of religious temple and places in India.

Some of the top most visited pilgrimages of India are below:

Uttarakhand is one of the best tourist destinations to visit with lots of pilgrimages. This is the place from where holy River Ganges (Ganga) emerges from Himalaya. Uttarakhand alone consist lots of pilgrimages but most popular pilgrimages are Char Dham of Uttarakhand which includes four holy shrines of Hindus. These shrines are Badrinath, Kedarnath, Gangotri and Yamunotri. Kedarnath is dedicated to Lord Shiva, Badrinath is dedicated to Lord Vishnu, While Gangotri and Yamunotri are dedicated to Goddess. These are four adobes of Uttarakhand, while Badrinath, Dwarka, Puri and Rameshwaram are four adobe of India. It is considered highly scared by Hindus to visit Char Dham during one’s lifetime. 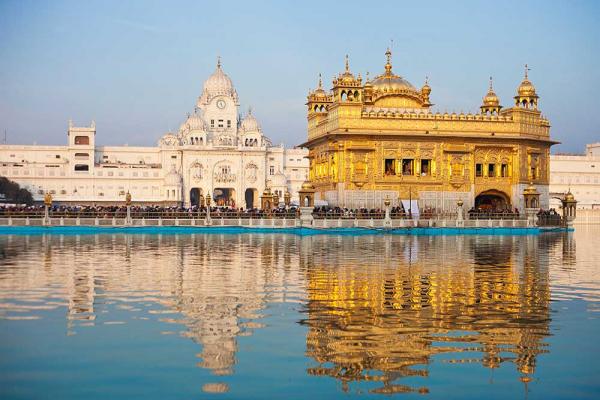 Amritsar is home to Harmandir Sahib and commonly known for Golden Temple. Golden Temple is important Sikh Shrine and spiritual and cultural centre for the Sikh religion. People of all religion visit this pilgrimage and this is symbol of human brotherhood and equality. Top of this temple is made of pure gold. Golden temple is surrounded by manmade lake which is called Amrit Sarovar (pool of holy nectar). Guru Nanak, the first Guru of Sikhs was used to meditate at his place and later temple was built.

Ajmer is one of the major cities of Indian state Rajasthan. Ajmer is surrouined by the Aravalli Mountains and it is the pilgrimage centre of Sufi Saintsa KHwaja Moinuddin Chisti. There are lots of religious places in Ajmer which attracts number of devotees from India and abroad. Places of interest in Ajmer are Pushkar Lake, Pushkar Camel Fair, Brahma Temple and Akbar Fort Museum.

Mathura is located at the center of Brij Bhoomi and called Shri Krishna Janam Bhoomi. Mathura is believed to be the birth place of Krishna. Mathura is one of the most visited pilgrimages of India. It is situated on the left bank of River Yamuna. Holi (festival of colors) is famous in Mathura. Some of the important places in Mathura are Dwarkadhish Temple, Ranghbumi, Virandavan (home of around 4000 temples dedicated to Hindu deities Lord Krishna), Gokul (where Lord Krishna spend his childhood) and Govardhan.

Dwarka is one of the four adobes of India and attracts lots of pilgrimages every year. Out of 12 Jyotirling, two are here. One Jyotirling is at Somnath and second at Nageshwar. The Shivling inside the Somnath Temple is beautiful and the sanctum sanctorum. In Hindi it is called “garbhgraha”. It is made of pure gold. Dwarka is dedicated to Lord Krishna, while Somnath temple is dedicated to lord Shiva. Nearby places of interest are Dwarkadeesh Temple, Gita Mandir and Rukshmani Temple.

Tirupati is the biggest pilgrimage spot in South India and one of the most visited places. Every year million of pilgrimage visits this holy place of Lord Tirupati. Because of Tirumala Venkateshwara Temple it is considered one of the holiest Hindu Pilgrimage. Tirupati is an ancient city in Andhra Pradesh and it is famous for its temples. The Tirumala Hills in Tirupati are the second oldest rock mountains in the world. Places to visit in Tirupati are Shri Venkateswara Temple, Sri Vari Museum, Sir Govindrajaswami Temple, Srikalahaste and Kanipakam.

Vaishno Devi is one of the top pilgrimages in North India. It is situated in small town Udhampur district of Jammu and Kashmir state of India. Vaishno Devi is dedicated to Hindu Goddess Shakti (Parvati). It is believed that Vaishno Deiv is second most visited pilgrimage site in India after Tirumala Venkateshwara Temple. Other places to visit are Ban Ganga Temple, Charan Paduka Temple and Ardh Kuwari.

Shridi is famously known as the home of the saint Sri Sai Baba. Shirdi is very scared, powerful and important place of pilgrimage in India. Visitors of all religion visit this holy place. Attraction nearby are Gurusthan, Samadhi Temple, cottage of Adul Baba, House of Laxmibai Shinde, Chavadi and Dwarkamai. The Sri Saibaba Sansthan Trust in Shirdi is one of the richest temple organizations in India.

Most visited Pilgrimages in India