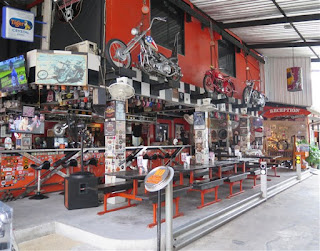 Much of the crazed Adventure across Myanmar and Thailand was conjured here at the Nicky’s Handlebar in Patong, Thailand
Dr. G had warned a South African, Paul Blignaut from Cape Town,  of the high degree of danger they would be facing, saying that “The Crazier Plan” for crossing Asia was at the opposite end of the adventure safety spectrum than the one scratched after his riding pal had abandoned him in Africa and bunny-hopped home. Blignaut, the owner/operator of GS Africa Rentals and Tours (www.gsafrica.com) said, “Bring it on! I’m no adventure riding bunny like your mate # 7 (Ed note: see June 22 Post in blog for reference) haring off back there quivering in the USA.” 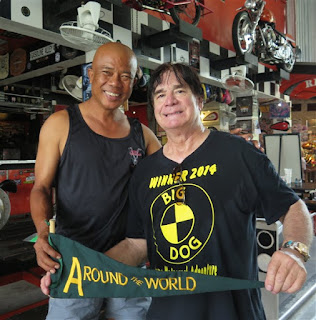 Nicky and Dr. Gregory Frazier are shown here meeting on Phuket Island to sketch out a fun and wild adventure across the middle of Southeast Asia after the rest of the world.

Blignaut and Dr. G then connected at the famed Nicky’s Handlebar (www.nickyhandlebars.com) after Nicky and Dr. G conjured what route could be mapped out across Myanmar through Thailand to Laos and how the South African tour guide and well-known adventurer Blignaut could qualify to participate. The plan was fairly simple, although untried before: rent two single cylinder motorcycles, ride to the southern border of Myanmar and place them on a truck to be carried through Myanmar to the northern Thai border where Blignaut and Dr. G would collect them some days later.  This would avoid hiring guides for both Thailand and Myanmar and filing for transit permits, a lengthy and costly expense.

Blignaut and Dr. G would ride in air conditioned VIP buses in Thailand from border to border, swilling and chilling for the time needed, and then ride unguided on their Thailand registered motorcycles across Thailand.  At the border of Laos they would take the motorcycles to the Thailand Post Office and mail them back to Patong on Phuket Island and fly onward. In Thailand small motorcycles can be sent through the mail service from one Thai point to another, often for less than it would cost to drive the motorbike the same distance.  When asked how long the adventure would take, Dr. G, knowing a weakness of Blignaut for Marker’s Mark bourbon, said, “Depending on your consumptive abilities, maybe two or three liters.” 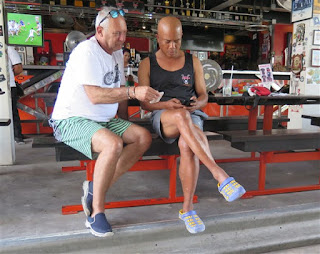