There are so many beautiful things to see in Yosemite, it’s hard to narrow it down, especially if you only have a few days and want to maximize your time. One of the great things about Yosemite is that if you’re staying in the park in a campground or lodge, you will by default see a lot of the main attractions such as El Capitan or Half Dome – all you have to do is keep your eyes open and know what you’re looking at.

Our picks for “must sees” covers a little of everything that Yosemite has to offer and are views that you should not be allowed to leave without seeing (otherwise you haven’t seen Yosemite!). All are accessible by car and most of them are pretty obvious and literally right in front of your face without needing to seek them out. It’ll give you a great overview of all of the amazing things in the park and you can see all of them in just one day:

If you’re only going to do one thing in Yosemite, this should be it. It’s the iconic landscape that you see when you think of Yosemite and it’s absolutely breathtaking. Top 3 most amazing natural views I’ve ever seen. It’s also easy to get to since it’s literally right along the road if you are entering the park through the southern entrance. No hiking or anything involved, it’s literally right there, you can’t miss it. That being said, it’s often very crowded and full of tour buses. You need to get there EARLY, and I mean like 6am to avoid the crowds. It’s still beautiful and enjoyable either way, but if you want it to yourself, get there at the crack of dawn (plus then the sun rises through the “tunnel”). It’s truly magical and you feel like you could look out into the Valley and see dinosaurs still wandering around.

Also an iconic part of Yosemite. The upper falls are around 1,400 feet tall, and the lower falls around 340 feet for a total height of almost 2,500 between the two – that’s a huge waterfall! You can see them from almost everywhere in Yosemite because they’re so big. The upper falls are difficult to get to and require an all-day hike, however the lower falls are easily accessible via a flat paved path only a 1/2 mile off the road. Again, this is usually very crowded, but it’s worth getting up close and personal with such a big waterfall. A live streaming video of the falls is available here.

Glacier Point is far above the valley floor and give you an amazing view of the surrounding mountains and the valley below. You aren’t viewing the point – you looking at the view from the point. You can clearly see El Capitan, Half Dome, and pretty much every waterfall in the park. It’s also a bit outside of the valley, which gives you a nice new perspective if you’ve only been on the floor. To get there, you have to drive south from the valley, past tunnel view, and then down Glacier Point road. There are buses that also go here if you don’t have a car. It’s most popular and crowded at sunset as the view from here is breathtaking. 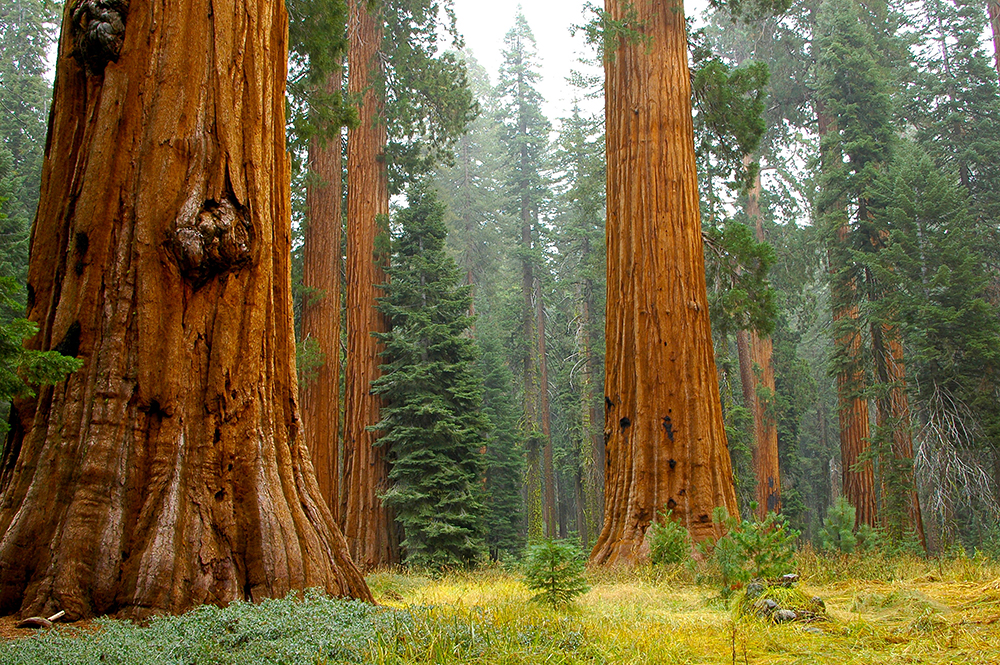 Photo courtesy of savetheredwoods.org
Walking among these giant trees really puts things into perspective. It’s not only beautiful, but a great place to allow yourself to become more in touch with nature. Many of these Giant Sequoias have been here before you were alive and will continue to be here for years after (if we don’t fuck up the planet first). Mariposa Grove is at the south end of the park, about 45mins away from the valley. It has a very different feel to it as it’s not all rocks and waterfalls and instead feels like you’re walking through Fern Gully. Its hard to really put into words what it’s like to walk through these trees and the photos really don’t do it justice. This grove is so much more than just a forest of giant trees, but you really have to experience it to understand.

NOTE: This area is currently closed for renovations.

Photo courtesy of wikipedia
Another unique staple in Yosemite are the meadows. No trip to Yosemite would be complete without seeing the meadows. There is a large meadow in the center of the valley floor that you drive around, but the most well known meadow is Toulumne, which is northeast of the valley. There is a river and footbridge that goes through the meadow, which makes it a great place for a stroll. Being outside of the valley, this area is a little less crowded, but it’s still a very popular spot. McGurk Meadows is also another very beautiful meadow that is less trafficked, but it does require a short hike to get there from a trail starting along Glacier Point Road. Details on that hike available here.

If you want to experience more “off the beaten path” options of what Yosemite has to offer, check out our:

The post Top 5 Must See Attractions in Yosemite National Park appeared first on Our Infinite Earth.