Epcot’s Food and Wine Festival, which is currently in it’s 22nd year, offers visitors a chance to experience cuisine from the around the globe even outside of their showcased eleven countries. From top-notch culinary chefs to the freshest ingredients right out of Disney’s very own greenhouses, this really is a don’t miss event for for food lovers. Recently, I spent two whole days eating around the “world” and while I unforutnately wasn’t able to try every single offering or every single pavilion, I did get pretty close. So starting with my favorite, I’m going to sum up every pound I put on at Epcot’s 2017 International Food & Wine Festival.

I had been drooling over the description of Brazil’s Escondidinho de Carne, which at first seems much like your typical meat pie, for weeks before the festival. And while this may at first glance seem like your typical meat pie, the seasoned meaty inside takes this simple dish to a whole other level. To top things off, figuratively and literally, the top layer is mashed yucca as opposed to your typical mashed potatoes, adding a mildly sweeter flavor. While visiting “Brazil”, we also grabbed a crispy pork belly; and while I wish the pork had been seasoned a bit more, the tenderness, and black bean and tomato combo definitely helped elevate the mild flavors.

The Mojo Pork had an A-rating the minute I laid my eyes upon it just because of portion size. The tapas size portions at the festival are great for sharing, and for saving room for other options but I appreciated the helping of pork after a long hot day. Being half Dominican, I have high expectations when it comes to my pork and the Islands of the Caribbean pavilion definitely did it justice! But with plenty of seasoning and red onions, it’s hard to go wrong. Jamaican beef patties aren’t usually my favorite thing, as I typically prefer the crispier shell of an empanada, but the meat filling of these mini patties had so much flavor and paired perfectly with a frozen mojito.

The three of these tapas sized dishes were so memorable, I probably wouldn’t be able to rank them in order. The Loaded Mac’n’Cheese, which was loaded with some peppers, onions, bacons and scallions, had a spicy kick to and was topped off with some sautéed bread crumbs it which reminded me of my mom’s hot sauce seasoned baked mac and cheese; always one of my favorite Thanksgiving side dishes. I wasn’t expecting much from the zucchini and ricotta ravioli, as it’s something I’ve tried numerous times, but it ended up being one of our favorite. The ratio of the filling was perfect, but it was the sweet undertone of the tomato sauce that really made it a winner.

Of course, I had to finish off these two neighbor pavilions with a Sweet Avocado Crema, as I’m not one to walk passed anything with “avocado” in the name. The avocado flavor was definitely there though not as strong as you’d imagine and ended up tasting amazing when combined with the strawberries and moist yellow cake tiers of this mini trifle. A small layer of tortilla streusel added for a tiny bit of crunch. All-in-all this dessert left me super impressed with the innovativeness of Disney chefs.

Most of the non-grape wines we tried at the Food & Wine Festival were slightly sweeter than most typical wines and really had the undertone of the fruit base that was used. This one may have had a pineapple undertone, but really just tasted like a typical white wine for the most part; though definitely not a bad white wine.

As for the sliders, I was so upset that each serving only came with one instead of two. The meat, perfectly cooked and seasoned, was paired perfectly with a spicy mayo that reminded me of an aioli. The sliders were finished off with a pineapple chutney and if you know me, anytime I see a dish combing pineapple with a protein base, it’s most likely what I’m ordering.

For those who may not know, Patagonia refers to the southern most cone-shaped part of South America shared by Argentina and Chile. This was one of the first stops we checked off on our “must stop at” list because…empanadas. Empanadas or Pataleos is one of the staples in my family and while I have tried and love numerous empanada variations (because love comes in all shapes and sizes) the best ones are made by one of my aunts. Well, the empanadas at this year’s festival tasted almost exactly the same. In case you were wondering, that means these empanadas are top notch.

The beef skewer was good, though honestly not much to write home about. The chimichurri sauce was tasty though and I really enjoyed the boniato puree underneath.

Germany has always been one of our favorite pavilions, due in a large part to the sweet smelling caramel shop and the large-sized bratwurst, so we were super excited when we saw the menu. The bratwurst was served in a pretzel role and despite being one of the most flavorful sausages I’ve ever eaten, the pretzel roll tasted nothing like a pretzel roll. But the bratwurst still gets an A+ for flavor.

The apple strudel was warm but served on top of a cold vanilla sauce. If you’re an apple pie fanatic like myself then this is for you; the apples were not only cooked to the perfect balance of soft but still in tact but also were seasoned with just the right amount of cinnamon. It may not look like much in terms of presentation, but it was outstanding!

The BaiJoe Punch is a combination of Chinese Bai Jiu Spirit, Lychee, Coconut, and Pineapple Juice. While Coconut and Pineapple are two of my favorite flavors, and I had no issue finishing the drink, it was a bit too sweet for my taste. The Duck Bat Buns were lovely, and so easy to eat due to how tender the duck was cooked; complete with the usual toppings of poison sauce, red onion, and scallions.

I did have one issue with the chicken pot stickers, and that that there were only two in a serving. All-in-all China is a must-stop and from what I hear, is one of the most popular pavilions every year. Easy to see why.

If you’ve ever eaten at Epcot’s “Le Cellier” than you’ll understand the appeal of this booth. While steaks at Le Cellier aren’t the cheapest option, the Canada booth pretty much gives you the option to try a steak a third of the pie of the original, for $8. The steak, covered in truffle butter sauce and mushrooms, is easily just as good as its full-sized counterpart. The Apple Ice Wine was also my favorite drink at the festival, giving off the taste of a spiked apple juice.

The Beer-braised beef, wonderfully flavored in it’s own right, was served over Gouda Mashed Potatoes which is what solidified this dish as a must-eat. The addition of roasted carrots adds to the home-cooked stew feel of the dish, which I personally love.

With Florida humidity, safe to say this wasn’t the crispiest of waffles even after only two minutes of ordering. While cutting we expected the worst but surprisingly, the chocolate ganache and whipped cream saved the day and still made this a worth while semi-dessert.

While reminiscing on last summer’s trip to Ireland, we decided to go down the menu when it came to the Ireland pavilion. And while half of our order we’d re-do in a heartbeat, the other half was great just for a try. There this quote that reads, “Roasted Irish Sausage is always a good idea”, or something like that. In this case, it definitely a good idea; perfectly cooked with potatoes and onion gravy. Followed by the Warm Chocolate Pudding, topped with a Irish cream liquer, these were two of our favorite dishes while dining around the world.

I had tried the Blonde Guinness at the urging of my sister who was interesting, and all I have to say is…stick to original Guinness. I’m not a general fan of light beer in general, so for those who enjoy it, this may a drink worth trying. While I didn’t strongly dislike the Cheddar and Stout Dip, I didn’t particularly love it. Considering this is one of my favorite dips when munching on bar foods at pubs in New York, I was a little disappointment. But as usual, even my not-so-favorite’s had a saving grace, in this case, the brown bread.

Flavors from Fire was the first booth we tried at this year’s Food & Win Festival and it definitely got us pumped for all of the other pavilions. The Sweet Pancake was topped with spicy chipotle chicken sausage, onion jam, and maple butter syrup. If just the description of that dish doesn’t blow your mind, than the taste definitely will. Yet another delicious combination, leaving in awe of the innovation of these chefs.

We had also ordered some Piggy Wings and while the sauce of the Korean BBQ was super tasty, we found them to be almost to tough to bite into and lacking in an adequate amount of meat. But you win some, you lose some.

Mexico is usually my go-to pavilion in general whenever strolling Epcot and looking for a pick me up, but I still had to grab a taste during the Food & Wine. The real winner of this dish was the chipotle sauce, which elevated the flavors of the meat and provided a much needed kick. Similarly the decent amount of scallions added some crunch to the sauce moistened tortilla.

While we unfortunately missed out a handful of other pavilions, due to time constraints and lack of adequate stomach space, we had one of the best time’s at Epcot’s 2017 Food & Wine Festival. And while I wish I could’ve described a few of the other things we ate: like the Spanakopita from Greece, Mango Mama Wine from Farm Fresh, the Ginger Pork from Japan, Beef Tenderloin Tips from Africa, and the Chartucerie Cone from Spain, I think it’s best to just say that you should go and have a try for yourself.

From Disney-lovers, to foodies, to wine connoisseurs, the Food & Wine Festival is truly a dynamic event for everyone. For those looking to be even more immersed in the experience, there are seminars and events ranging from wine pairings, to chef demonstrations, to cheese seminars. For travel or design enthusiasts, you’ll get a kick of out the design of each booth which are built to reflect the culture and regions they are representing.

I’m easily an advocate for all Walt Disney events, but the Food & Wine is truly something spectacular. 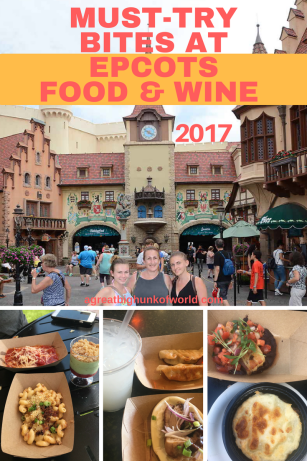