Make the most of your holidays in Myanmar 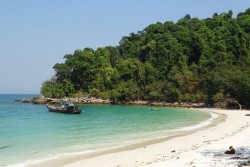 Whether you're thinking of just swinging by Myanmar or actually spending all of your vacation in Myanmar, there's no better time to plan out a Myanmar Travel holiday than right now. Why? This travel destination has only recently opened to the rest of the world. As a result, you'll be one of the first few waves of travelers that get to enjoy this country's exotic charm.

Wild Hammer Megaways Slot Review (iSo…
15 Insanely Perfect Backpacks For Tee…
My alternative summer: travel writers…
The Hoxton, Rome
Giant Piece of Space Junk Expected to…
Historically known as Burma, Myanmar travel has always captured the imagination of European travelers dating back to the British colonial era in the 1800s. There is just something about Myanmar travel that embodies the very definition of an exotic travel paradise. It is not an accident why exotic and magnificent spectacles have been associated with the Burmese.
Whether you're just passing through Myanmar or actually spending all of your vacation in Myanmar travel, you need to stop by Mandalay. As mentioned earlier, Mandalay is the cultural capital of Myanmar. It was the pre-British colonial era capital of this country and a lot of its buildings, streets and culture remains very pristine and dates back to pre-British influences so if you want to peer into the relatively pristine and unspoiled picture of what life were like before the British came, you need to stop by Mandalay. Also, you'll probably be bowled over by the splendid and magnificent buildings and attractions this city holds.
While Mandalay is the cultural heart of Myanmar travel, Bagan is the historical core of this country. How can it not be? Besides being the center of Buddhist pilgrimage for Myanmar, Bagan is also the site of one of Burma's largest kingdoms. Bagan was a regional geopolitical player and it shows on its architecture and ruins. If you want to truly appreciate Myanmar's travel history, stopping by Bagan is mandatory.

Most of the travelers usually are too keen on spending too much time in the capital city of the country they are visiting. Many travelers usually assume that if they're looking for an authentic and untouched cultural experience, they need to hit the countryside. While this is true of certain destinations, it's not true across the board. It's not true when it comes to Myanmar travel. In fact, you're only cheating yourself if you overlook or neglect Yangon, the capital city, while you're on your Myanmar holiday. Yangon has many cultural offerings as evidenced by its temple complexes, pagodas and historical landmarks, more importantly, Yangon acts as a great teaser of what you should expect once you explore Myanmar's travel countryside. It's definitely a great place to start your Myanmar travel.

Make the most of your holidays in Myanmar