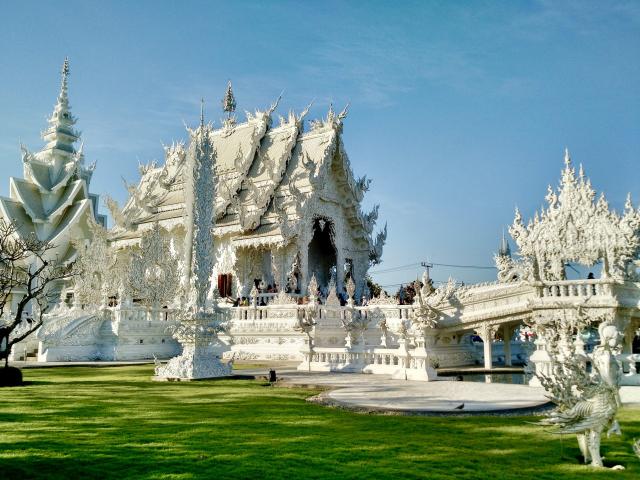 Chiang Rai certainly doesn't have the frenetic vibe of Bangkok nor the allure of Chiang Mai but what it does have is Wat Rong Khun. At the same time Buddhist temple and art exhibit, visiting Wat Rong Khun is a must! While travellers to Thailand sometimes feel “templed-out”,  a visit to Wat Rong Khun will certainly revive your interest. The White Temple, as it’s commonly called, is like no other anywhere in the world.

In this post, you’ll find information on the meaning behind the White Temple and also useful information for visiting Wat Rong Khun in Chiang Rai.

It's hard to believe the design and concept of the temple is the brainchild of only one man. Chalermchai Kositpipat is an unconventional Thai multi-disciplinary artist who came up with the eccentric design of Wat Rong Khun. He began construction in 1997 but works on the temple are ongoing and aren't expected to be finished any time soon. The temple/art exhibit was opened to the public shortly after its initial construction, attracting a constant stream of visitors ever since.

Thanks to his wild and wacky creativity, Chalermchai takes visitors on a surreal voyage through his fantastical world of demons and spirits, of good and evil. At times I was left speechless, other times I was scratching my head at all the oddities (more on that later).

AN INTRODUCTION TO THE WHITE TEMPLE OF CHIANG RAI

While most temples in Thailand are adorned in gold, Wat Rong Khun was constructed all in white. The white was purposefully chosen to signify the purity of Buddha. The white plaster was then embedded with millions of mirror mosaics symbolizing Buddha's wisdom. This is evident as the sun hits the tiny glass particles creating a blinding effect (making it very difficult to photograph the temple, haha). In reality, a visit to the White Temple is meant to be more of an experience than anything else. Visitors are taken through virtual stages of life and death to, ultimately, reach Nirvana/Heaven.

EXPERIENCING THE CYCLE OF REBIRTH

The first stage you’ll experience at Wat Rong Khun is the Cycle of Rebirth. This is achieved by crossing a small bridge flanked on both sides by creepy, skeletal hands. The severed hands belong to those unlucky few suffering in Hell. This symbolic crossing over signifies overcoming worldly desires to eventually attain an unsurpassed state of happiness. As far as visiting any temple, this is definitely intense.

As a side note, the narrow bridge tends to get really crowded but take the time to notice the skulls, gargoyles as well as the odd fingers painted in red nail polish (signifying vanity). Once you've crossed the bridge unscathed (symbolically-speaking, of course), you're ready for the next stage.

PASSING THROUGH THE GATE OF HEAVEN

After your symbolic rebirth, you'll continue your journey through the Gate of Heaven. You’ll be greeted by two mythical creatures, Rahu and Death, at each side of the gate. Rahu protects faithful followers from all evil while Death needs no explanation. Death’s accusatory finger points out sinners unworthy of eternal happiness. According to Chalermchai Kositpipat’s concept, this is where visitors are expected to clear their conscience of any wrongdoings in order to reach the next stage: Heaven.

THE LAST STAGE ON YOUR VISIT TO THE WHITE TEMPLE

Spoiler: Unfortunately, it's forbidden to take photos inside the temple so I’ll try to describe Chalermchai's unconventional design as best as I can. Imagine this:

As you enter the White Temple, your eyes will be diverted to two floating Buddha images painted on a gold background. So far, this is not unusual for Buddhist temples but the rest of the interior certainly is. In contrast to the serene exterior, the walls are splattered with vivid, psychedelic colours. Dragons, mystical spiritual beings, horned demons and mythical ghouls engulfed in blood-red flames are painted on the walls and ceiling. But, that’s not all.

For whatever reason, pop culture icons, celebrities, politicians and cartoons appear amidst images of the sacred Buddha. Also, references to science-fiction movies such as The Matrix and Avatar, spaceships and a scene from 911 are painted on the walls. If that isn't strange enough, Michael Jackson, Superman and the Transformers (yes, you read that right) are added on as extras. You'll be left scrambling for words as you find yourself entangled in Chalermchai's otherworldly universe!

After your visit, you can wander around the grounds of the White Temple where you’ll see more unusual sights such as heads hanging in trees and fairies wading by the pond. Strange indeed but it’s all part of the experience of visiting Wat Rong Khun!

IS WAT RONG KHUN WORTH VISITING?

Absolutely! Chiang Rai is a bit out of the way but you should definitely make some time to visit the White Temple. Wat Rong Khun is not only unusual and strange but it’s also a stunning work of art. You’ll never see another temple like this one anywhere else so make sure to put it on your list of places to visit in Thailand!

USEFUL INFORMATION ON VISITING THE WHITE TEMPLE IN CHIANG RAI:

What is the entrance fee to the White Temple?

Is there a dress code to visit the White Temple?

Men and women are expected to cover their knees and shoulders.

What are the opening hours for the White Temple?

What is the distance from Chiang Rai to the White Temple?

The temple is located about 13 km from the centre of Chiang Rai.

How do you get from Chiang Rai to the White Temple by bus?

It’s very easy to get to the White Temple by bus. Just head to the Chiang Rai Bus Terminal 1 in the city centre. Look for buses with the banner written “White Temple”. The bus fare should cost 20 baht (.57 cents).

Have you been to the White Temple of Chiang Rai?

This huge stone head is the most famous landma

This huge stone head is the most famous landmark in Villahermosa! The Olmecs were the earliest known Mesoamerican civilization dating back to c. 2,500 to 400 BCE. The open-air museum also features other ancient artefacts (and roaming coatis).

Colours of the rain