After six months of eating fiery kimchi, mountains of rice, and mystery fish soups everyday, I’ll have to admit… I was really excited to leave Korea for my school’s winter break and bite into some new and different Asian cuisines.

Now, I ate a lot (and I mean a lot) in Taiwan. So much so, that I have to write three separate posts about my experiences with (amazing) Taiwanese cuisine; because, a) I don’t want to make you too hungry while reading (I’ve taken several snack breaks while writing this), and b) I’m partially mortified to reveal to you how much I ate and believe it will seem less extreme if I break it up into three parts.

When I got to Taipei, I was famished. A familiar feeling in my daily life. To remedy this, I made the journey over to Shilin Night Market. What better way to satiate my hunger and get exposure to Taiwanese cuisine than to eat my way through Taipei’s biggest night market? 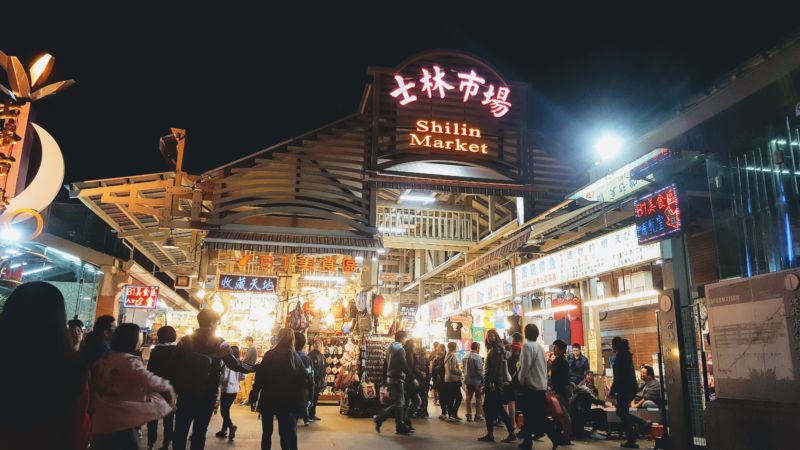 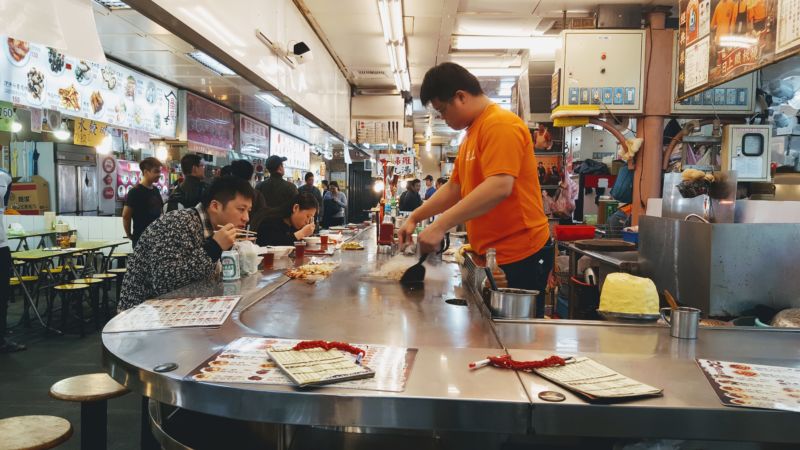 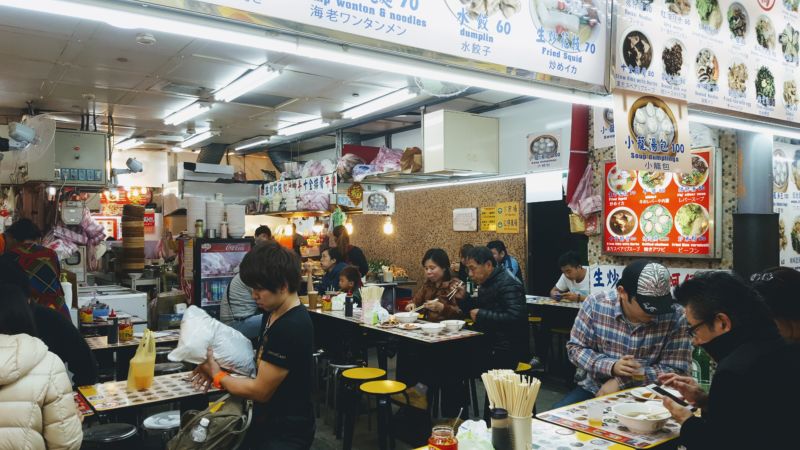 Here are my favourite eats from the dangerously delicious Shilin Night Market.

Yes, this is definitely a literal translation of what this amazing snack is. The “small cake” portion looks like a fancy beef patty from a Toronto 7-Eleven with a golden and flaky exterior. But, instead of beef, the pastry is stuffed with a red bean filling. The “large cake” portion looks and tastes similar to a crepe.

When I ordered my small cake wrapped in large cake (say that ten times fast), I had no idea what I was ordering. I had to choose a flavour from the menu – either a “sweet” option (red bean, mung bean, taro, peanut, or, coconut) or a “salty” option (sesame, curry, taro, peanut, meat floss, spicy, pepper, or, seaweed). Since I couldn’t decide between a sweet or salty option, I chose peanut. I’m a huge sucker for anything peanut-flavoured. You can never go wrong with peanuts.

The assembly process was completely foreign to me. The vendor took the small cake and placed it in the middle of the large cake. He then proceeded to hammer away at the small cake until it broke into 1,000,000 tiny, crumbled pieces. Followed by throwing a heap of crushed peanuts along with other seasonings including sesame, on top of the pile of crushed small cake. Then, finally wrapping everything up like a burrito.

It was good. Like really, really, really good. I am seriously considering visiting Taiwan again for the sole purpose of having another peanut-flavoured (or any flavour for that matter) small cake wrapped in large cake. 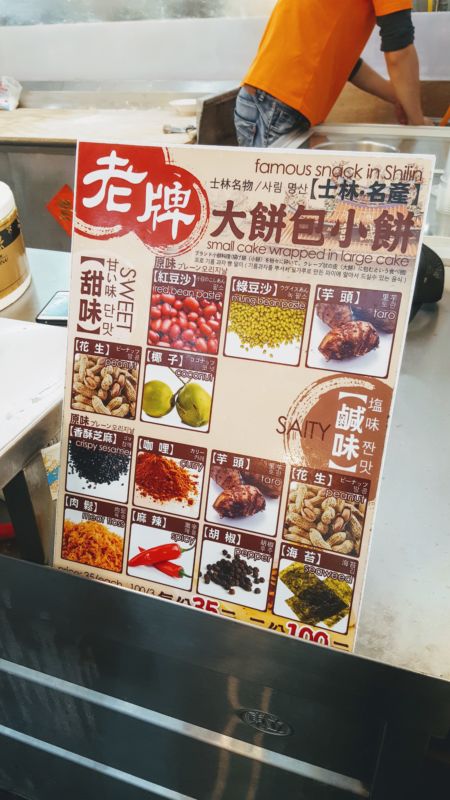 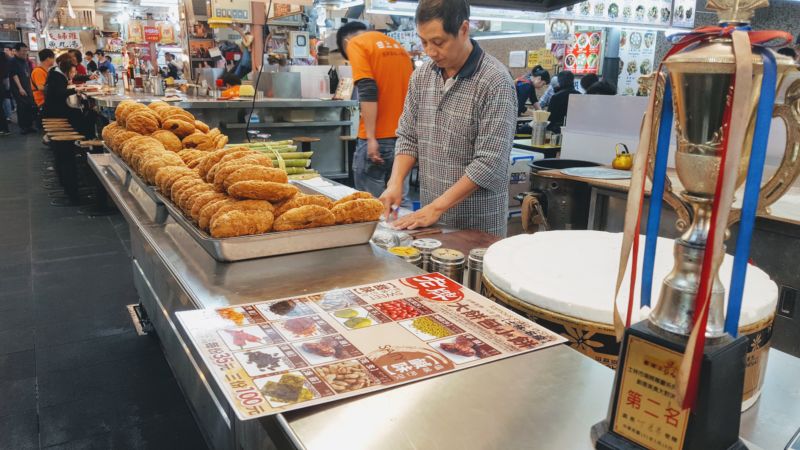 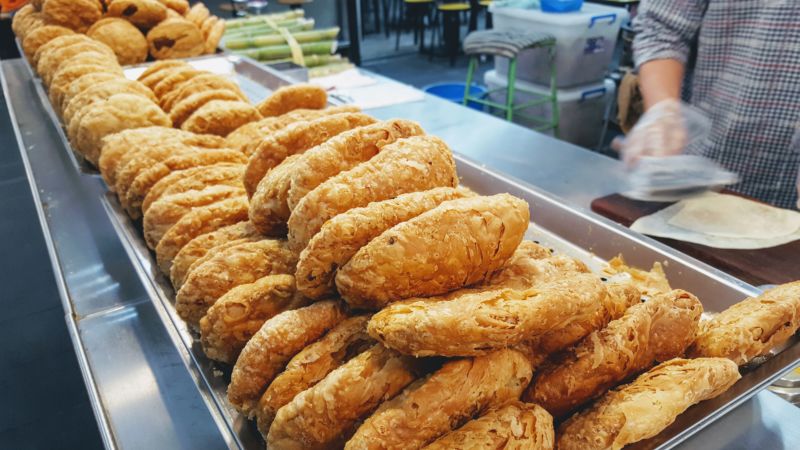 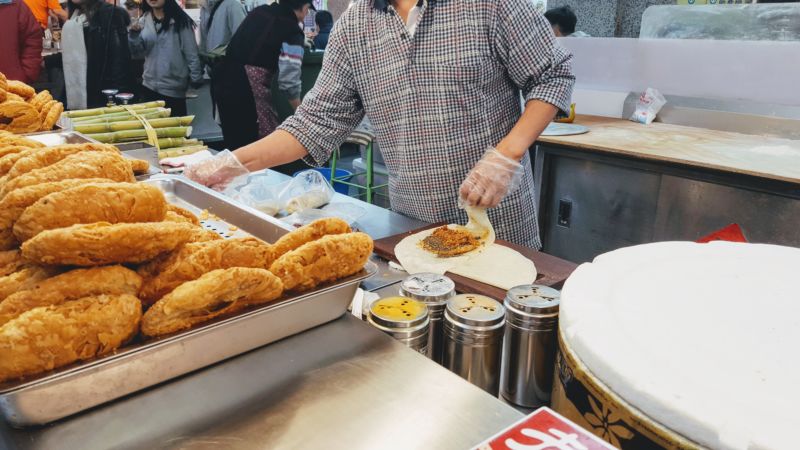 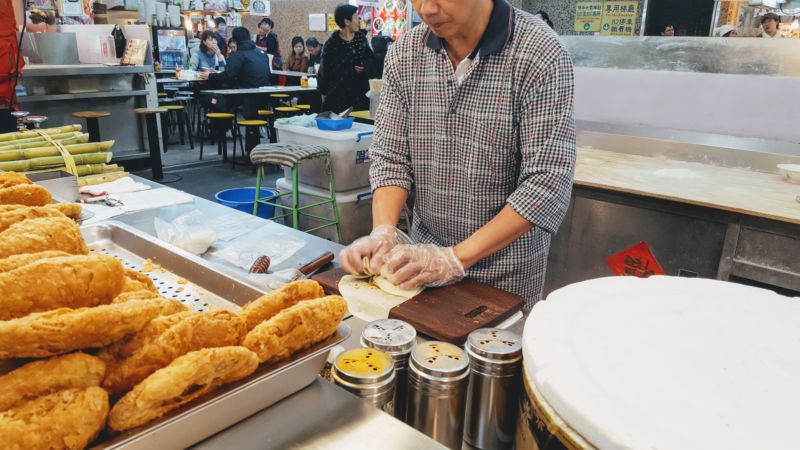 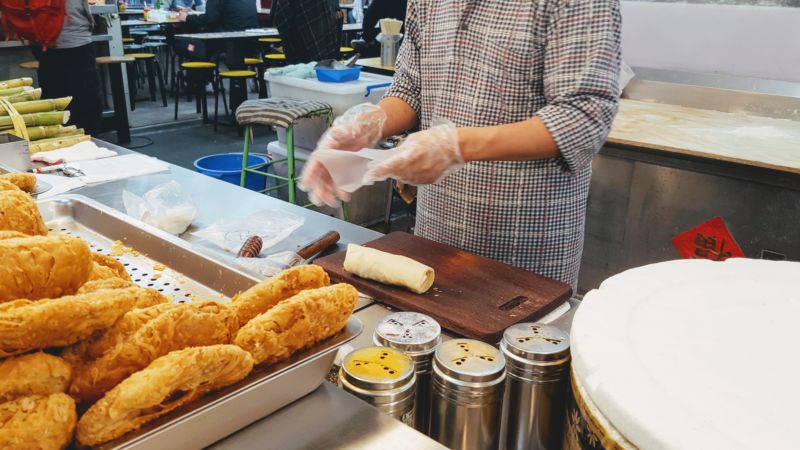 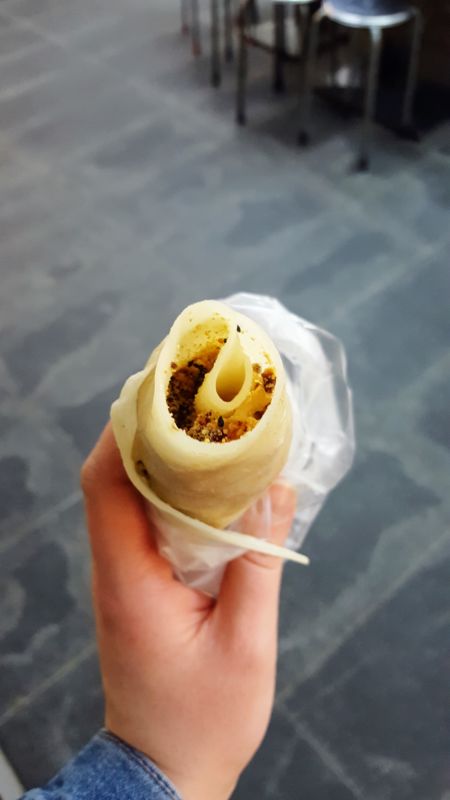 I have never been so excited to see fruit in my entire life.

Fruit in Korea is very limited and very expensive! So, while in Taiwan, I made it my mission to overload myself with these freshly squeezed juices. I was told that the fruit-milk combinations were the most popular among locals. I tried the mango milk. Truly, I’ve never appreciated mango so much until I had that first sip. 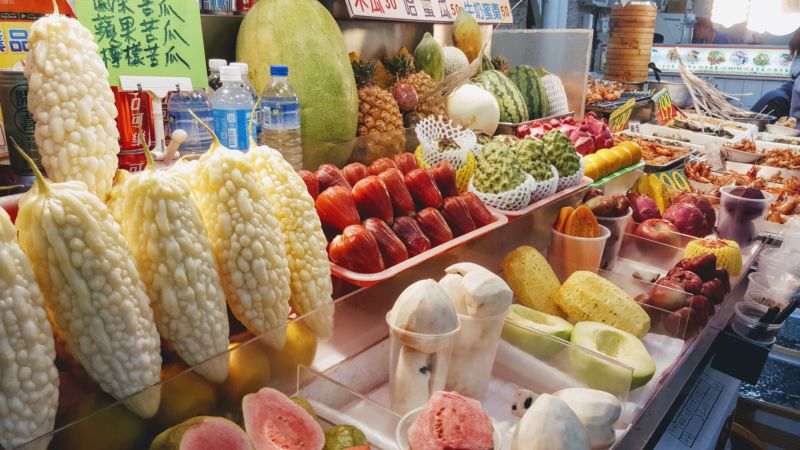 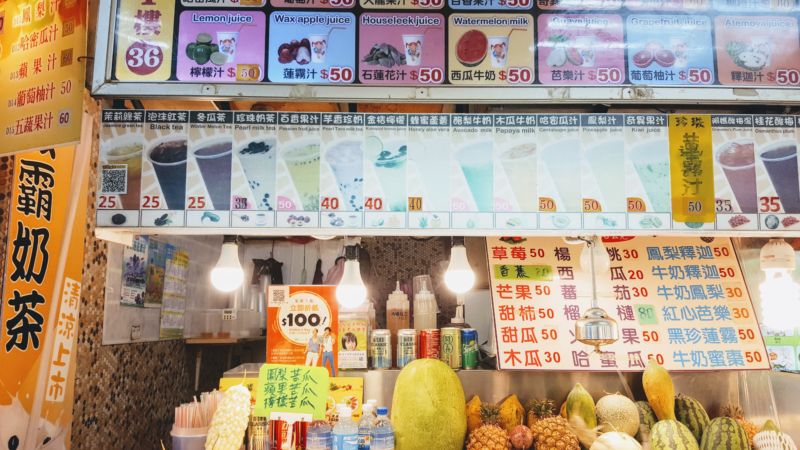 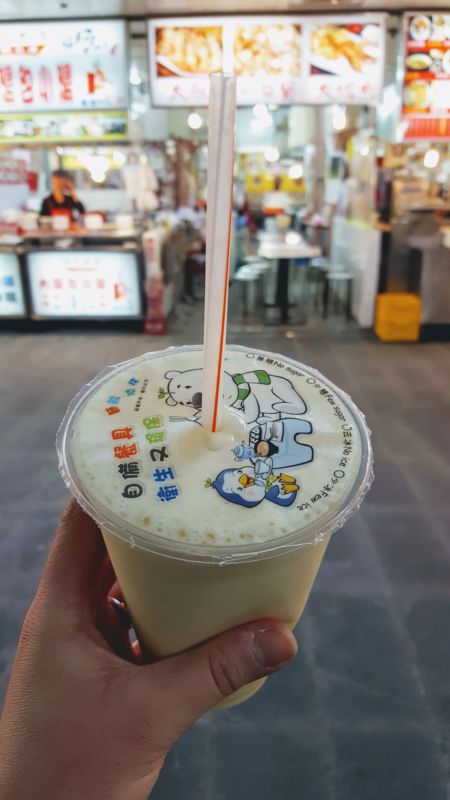 Served piping hot in a bamboo basket, these dumplings were some of the best I’ve ever had! Xiaolongbao are small, pork-soup dumplings. Pork meatballs and a tasty broth are wrapped up in a thin dough, steamed, then served with a dipping sauce consisting of vinegar, soy sauce and thin slices of ginger. I scorched my tongue multiple times while inhaling these. Luckily, I had a cold Taiwan beer to soothe my burns. 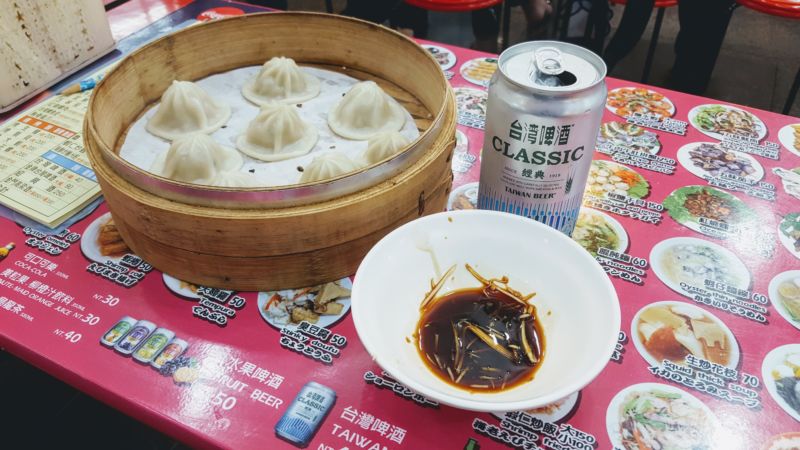 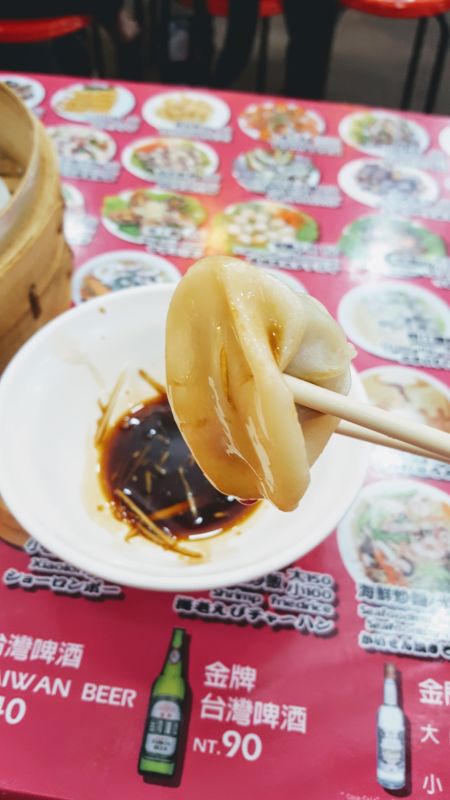 I remember during my childhood experiencing a recurring issue with candy apples. They were so good (I mean anything doused in hardened caramel is surely delicious, right?), but SO difficult to eat. Looking back, I put my teeth through a lot of stress.

Well, it’s been years since my last candy apple. Luckily, all my teeth are still in tact. But, when I saw the shiny rows of tanghulu at the market, I knew that I had to risk a visit from the tooth fairy.

Unlike candy apples, tanghulu, or sugar-coated fruits, are much smaller and manageable. Skewered cherry tomatoes, plums and strawberries are dipped into toffee and are left to harden right on the food cart. Most people were picking up the cherry tomato skewers – a strange combination in my opinion, but I always like to think, do as the locals do. Surprisingly, they were pretty darn good (who knew?). If I wasn’t so concerned about maintaining a full set of teeth, I would’ve definitely chomped on more of these! 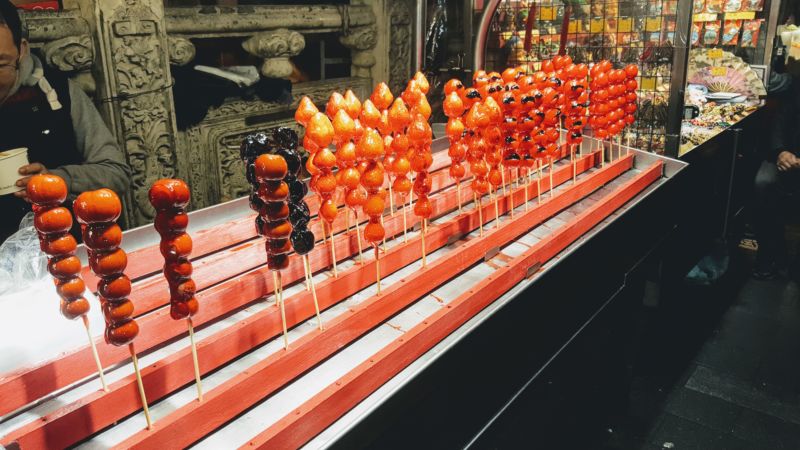 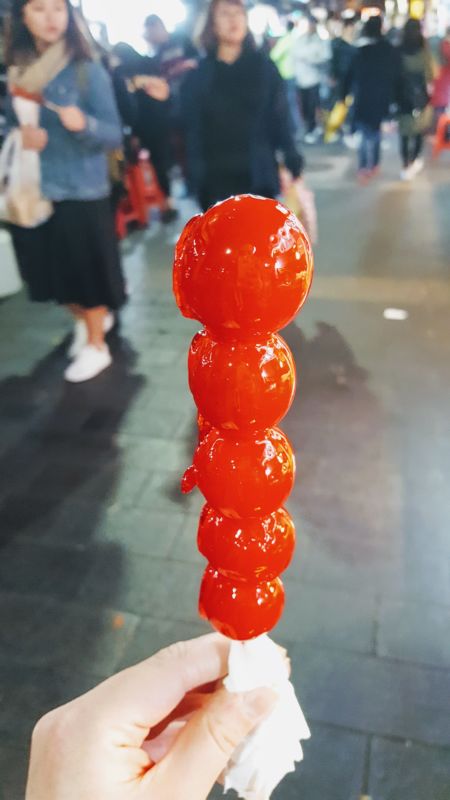 I definitely lost count of how many of these I ate.

These heavenly bite-size creations are made with sweet potato and tapioca flour, and then fried until they become golden brown. Like the small cake wrapped in large cake, these magical puffs can be made to have a sweet or savoury taste. Powdered seasonings, such as plum, seaweed and chocolate are generously poured on top of the pile of puffs, which are then served hot in a bag with a wooden skewer to fish them out. I had mine with the plum powder and was definitely not disappointed with my choice. 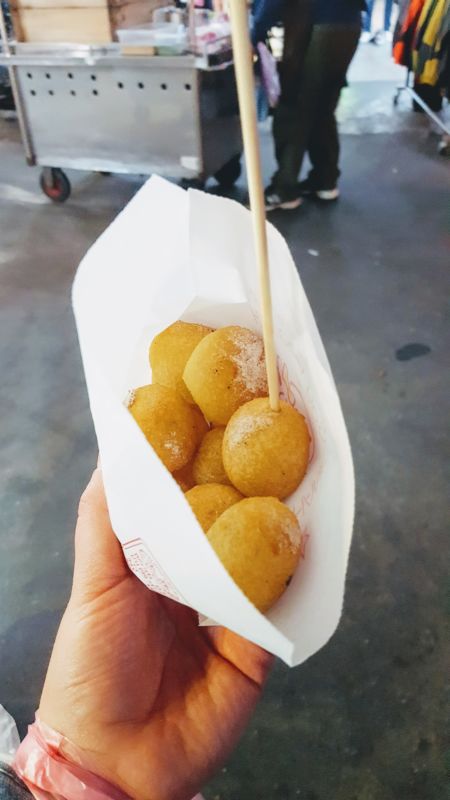 The problem with food markets is that I’m usually ravenous and eager when making my way through; but, also know that the best eats are the ones with dozens of people queued down the street. Why am I always so hungry? For this one, I hungrily waited at the back of the queue for a long time, and in the end, I’m very glad I did. Zero regrets.

This was the best pork bun (or any type of bun for that matter), that I’ve ever had. Balls of dough are filled with minced, marinated pork, black pepper, and a mountain of green onions. They are then coated with sesame and thrown into a kiln to bake. The result… A massive bun, super crispy on the outside and soft on the inside, that is absolutely amazing bite after bite. I would definitely queue up for this one again, even at my “hangriest” state. 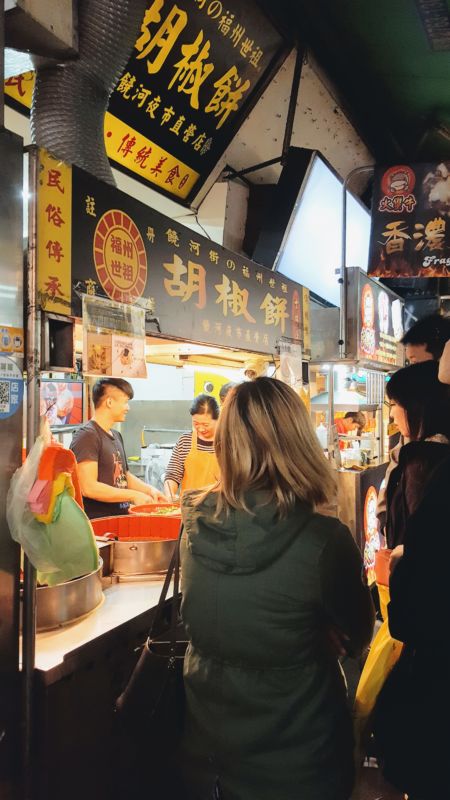 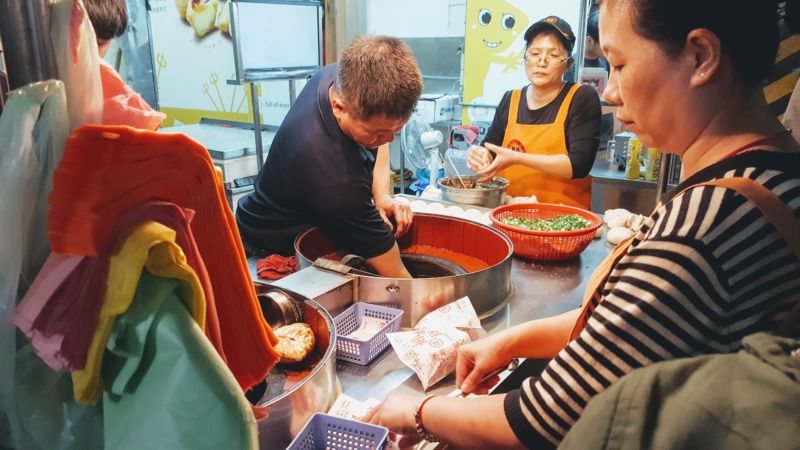 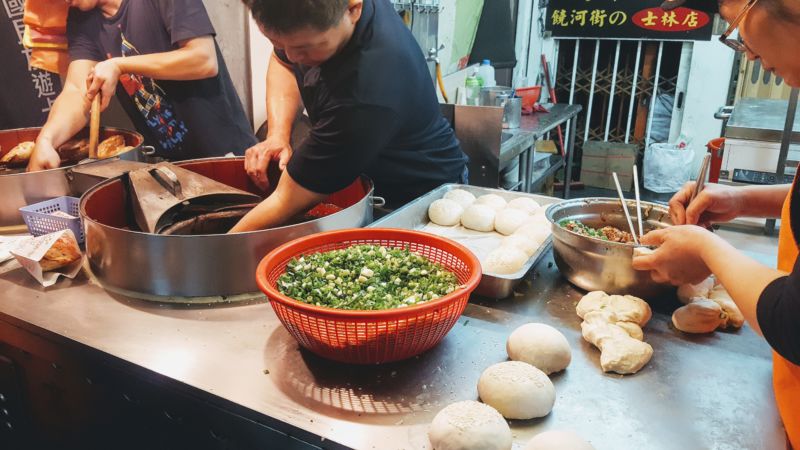 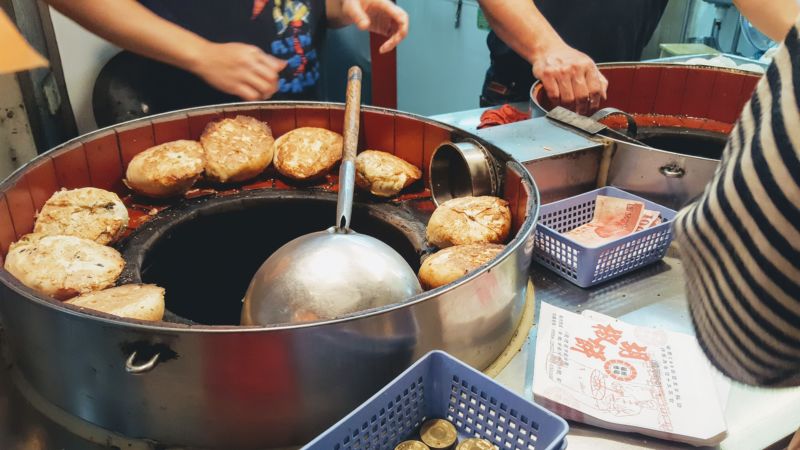 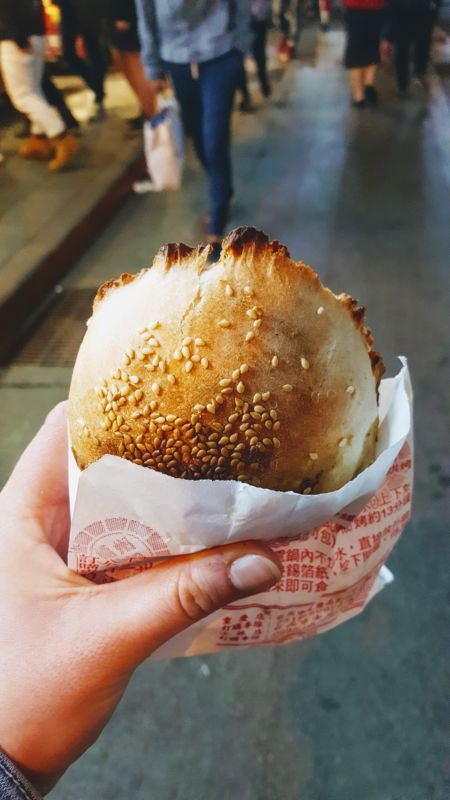 If you’re making your way through Taipei, do not miss the Shilin Night Market! It is an absolute must for anyone who has a voracious appetite!

Just bring your ravenous self with cash! Eat your way through both the outside and the underground, basement area of the marketplace. The basement has lots of tasty, casual, dine-in options with lots of seating. The market is open from 4:30 PM until late, but most vendors close-up shop around midnight.

How to get there:

Take the red line along the MRT to Jiantan Station. Leave the station at exit 1 and cross the street diagonally. You will see masses of people lined up for the outdoor vendors on the corner.

As always, happy eating, everyone! 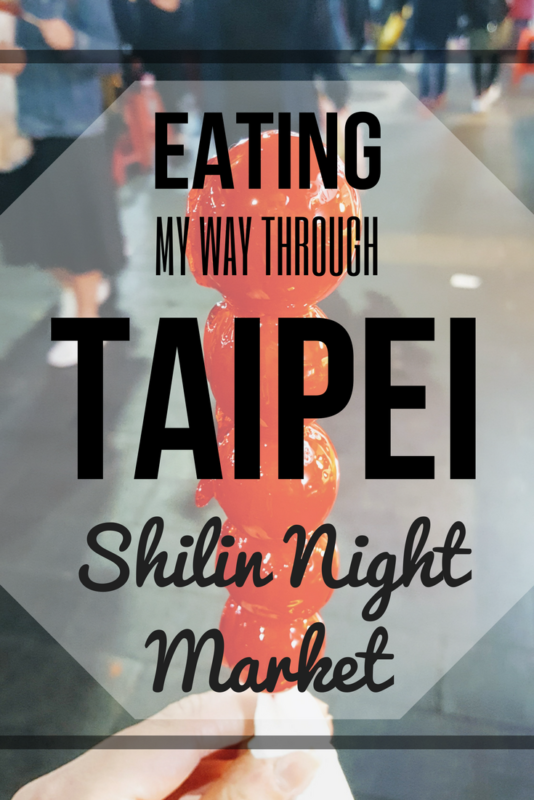 The post Eating My Way Through Taipei: Shilin Night Market appeared first on a broader tale.

This post first appeared on A Broader Tale, please read the originial post: here
People also like
With a baffling Q4 looming, here’s how publishers are navigating these murky waters
Barcelona plan to offer €9 million in their attempt to sign 27-year-old full-back
Xiaomi Opens its First Authorized Store in Nigeria