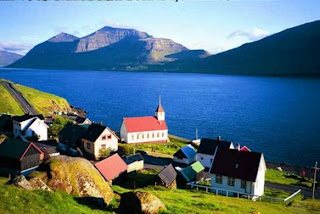 The Faroe Islands, are an island group situated between the Norwegian Sea and the North Atlantic Ocean, approximately halfway between Scotland and Iceland. The Faroe Islands are a part of the Kingdom of Denmark, along with Denmark proper and Greenland.

The Faroe Islands have been an autonomous province of Denmark since 1948. Over the years, the Faroese have been granted control of most matters. Some areas still remain the responsibility of Denmark, though, such as military defence, foreign affairs and law.

The Faroe Islands have close traditional ties with Iceland, Shetland, Orkney and the Outer Hebrides. The Faroe Islands were politically associated with Denmark in 1380, when Norway entered the Kalmar Union with Denmark, which gradually evolved into Danish control of the islands, but this association ceased in 1814. The islands are represented on the Nordic Council by the Danish delegation.

As a modern country in the North Atlantic, the Faroes are well aware of the need to develop and maintain good trade relations with other countries. We are a modern, outward-looking Nordic people with a well-developed infrastructure, economic growth and high levels of education, living in spectacular natural landscapes in northern Europeand surrounded by a productive and healthy marine environment.

The Faroe Islands consist of eighteen separate islands. The whole area of the Islands is approximately 1399 square km (540 sq Mles). There is 1117 kilometes (694 mi) of coastline. There are no land boundaries with any other country. The only island that is uninhabited is Lítla Dímun. 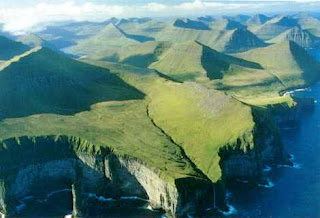 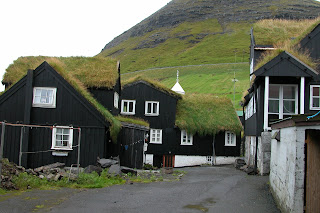 The Faroese economy has traditionally been dominated by the fishing industry, and Faroese companies have developed considerable skills and know-how in this field. As well as our significant export of quality fish products, Faroese manufacturing has specialised in producing machines and equipment especially designed for fishing, fish farming and fish processing.

Over the past decades the Faroes have also been exploring and developing new and diverse business possibilities, with a growing emphasis on technology and services.

The Atlantic Frontier to the south of the Faroes is an area, which is expected to provide the basis for a future oil and gas industry in the Faroes. 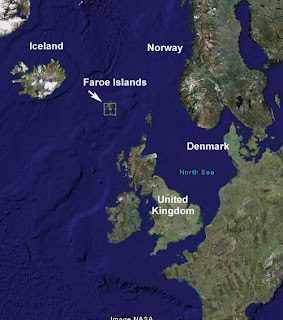 The early history of the Faroe Islands is not well known, although Gael hermits and monks from a Hiberno-Scottish mission are believed to have settled in the 6th century, introducing sheep and oats and the early Goidelic language to the islands. Saint Brendan, who is supposed to have lived around 484–578, is said to have visited the Faroe Islands on two or three occasions (512-530), naming two of the islands Sheep Island and Paradise Island of Birds.

Later (c. 650) Norsemen also settled the islands along with the early Gaels, bringing to the islands the Old Norse language which evolved into the modern Faroese language spoken today. The settlers are not thought to have come directly from Norway, but rather they were Norwegian settlers from Shetland and Orkney, and Norse-Gaels from the areas surrounding the Irish Sea and Western Isles of Scotland. The old Gaelic name for the Faroe Islands Na Scigirí means the Skeggjar and probably refers to the Eyja-Skeggjar (Island-Beards), a nickname given to the island dwellers.

The Faroe Islands have a very active music scene. The islands have their own symphony orchestra, the classical ensemble Aldubáran and many different choirs; the most well-known being Havnarkórið. The most well-known Faroese composers are Sunleif Rasmussen and the Dane Kristian Blak. Blak is also head of the record company Tutl. 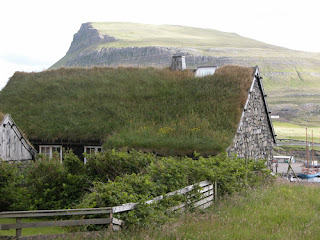 The festival of contemporary and classical music, Summartónar, is held each summer. Large open-air music festivals for popular music with both local and international musicians participating are G! Festival in Gøta in July and Summarfestivalurin in Klaksvík in August.

Open up your senses, take a deep breath and fill your mind with purity.Welcome to the Faroe Islands just two hours flight from London.The Faroe Islands may not be easy to find on a world map but if you have been there once you will never forget.This is the country with the freshest of air and an overwhelming nature. The 18 green islands rise from the sea in the middle of the North Atlantic.The Faroese are extremely hospitable people who welcome visititors with open arms. People and nature live together in harmony and past and present meet without leaving behind modernity.Endless possibilities of hiking, cycling, birdwatching, diving, fishing and much more.

# Location: In the middle of the North Atlantic northwest of Scotland and halfway between Iceland and Norway.

# Capital: Tórshavn is the smallest capital in the world with 19,000 people.

# Currency: The currency of the Faroe Islands is called the Krona (pl. Kronur). The Danish Krone can also be used. 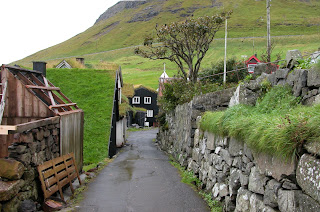 The language of the Farøes is one of the Germanic family of languages. Like Icelandic, to which it is closely related, it was originally derived from the old Nordic tongue, to be succeeded by a number of dialects. Modern Faroese spelling rules were laid down by V. U. Hammershaimb in 1846, and this has brought in its wake a unique and original form of Faroese literature. Danish is a compulsory second language in the schools. 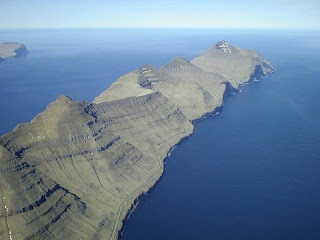 Sheep-rearing has long been important on the islands, which are indeed named after the sheep. Today the principal source of income for the inhabitants is fishing. Some of the people work in shipyards and spinning-mills. Pullovers in beautiful colors and designs are popular souvenirs with tourists.

The largest islands are Streymoy, Eysturoy, Suøuroy, Sandoy and Vágar. Most are separated by narrow sounds..

The major attractions of the islands are 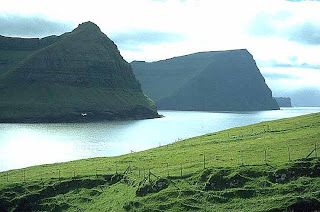 To the north and northeast of Eysturoy lie many sizable and smallish islands. Klaksvik, on Bordoy, has a population of 5,000, making it the second largest town in the Farøes. The town began to grow when fishing became more important than agriculture, for Klaksvik has a good natural harbor surrounded by hills. Note the History Museum and St Christians Church, from the roof of which hangs a boat which was the only one of four to return safely to land on a stormy winter's night in 1923. 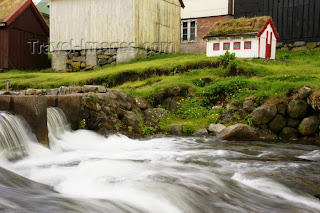 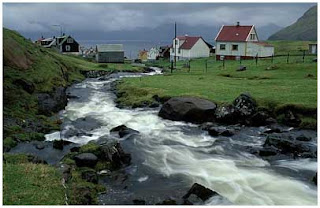 East of Streymoy lies Eysturoy. These two islands, the largest in the Farøes group, are linked by a bridge. Between Gjógy and Eiøi in the north of Eysturoy tower the highest cliffs in the Faroes, reaching heights up to 882m/2,895ft above sea-level. They can be climbed in clear weather and from the top there is an extensive view over the sea and the islands. At the northern tip of Eysturoy the Rison and Kellingin rocks tower up out of the water. 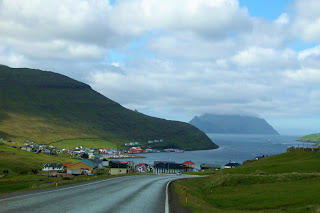 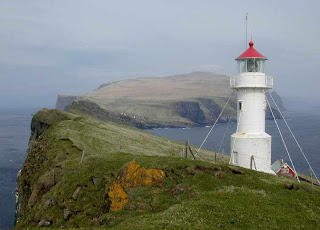 From Sorvágur on the west coast of Vágar there is a boat service in summer to the little island of Mykines, where the rocks inhabited by birds are easily accessible and extremely attractive. Seagulls, guillemots and puffins abound; the inhabitants catch birds for food. 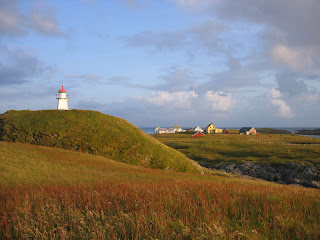 To the south of Streymoy lie Sandoy and Suduroy, between which flows the Suduroyar Fjord. Sandoy ("Sand Island"), named after the sandy beaches near Sandur and Húsavik, is the flattest of the islands. The land is used for agriculture and there is excellent fishing. In the pretty village of Húsavik can be seen an old house with an open fireplace and chimney; until a few years ago this house was inhabited.

The largest island in the Farøes archipelago is Streymoy (Danish "Strømø"). On its southeast coast lies Tórshavn, the port and capital of the Faroes. It has only 15,000 inhabitants, making it the smallest capital in Scandinavia.

The oldest part of the town, with pretty little wooden houses, lies on a spit of land in the harbor area. At the tip of this peninsula, at Cape Tinganes, the Vikings established their first thingstead (legislative council), probably about 930. Near the peninsula stands a memorial to Niels Ryberg Finsen (1860-1904), who was born in Tórshavn and won the Nobel Prize for Medicine in 1903. 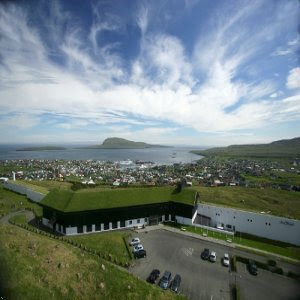 Also of interest is the fortress of Skansen (ca. 1580) near the harbor, from which in years gone by the entrance into the town was defended. In the National Museum, with its ethnological collections, etc., visitors can obtain information on the history and culture of the Faroes. The Maritime Museum is housed in a neighboring building. 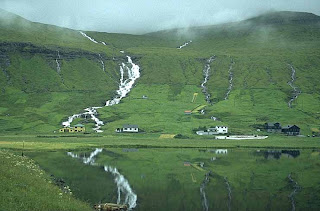 The important places of Stremoy to visit are 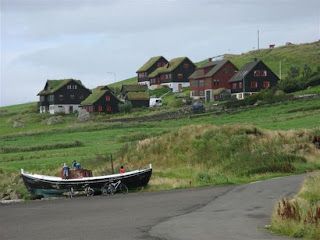 To the southwest of Tórshavn lies Kirkjuböur, a place inhabited by Irish monks as early as the eighth C. Here stand the ruins of the 13th C. St Magnus' Cathedral, an uncompleted building with tall basalt walls and Gothic pointed windows, and St Olaf's Church which has been restored. The medieval timber-framed house known as "Stokkakstovan" is now a museum. 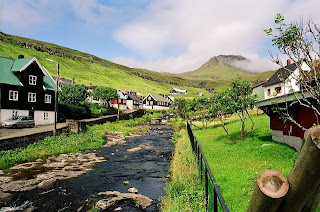 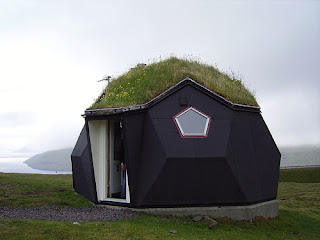 North of Tórshavn it is worth visiting Kvivik, where a house dating from the Viking Age has been excavated, and Hvalvik, which has the oldest wooden church in the Farøes. 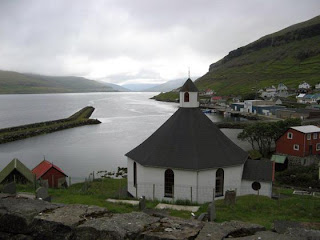 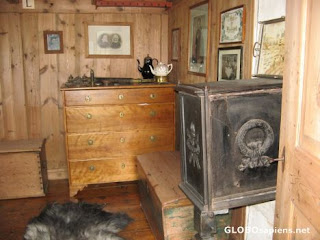 In a deep valley about 10km/6mi from Kvivik, on the northwest coast of Streymoy, lies Saksun, now a museum depicting life in the Middle Ages, with good fishing nearby. The Dúvugardur, a farmhouse built of boulders and peat, is furnished much as it was in the Middle Ages. 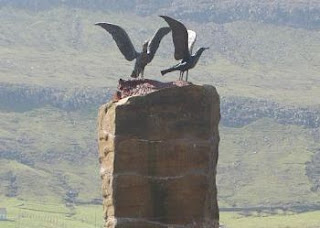 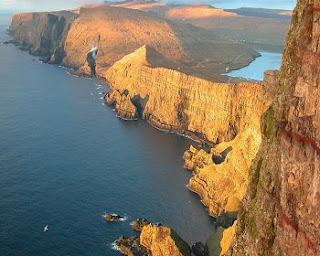 Sumba on Suduroy is the most southerly of the Farøe Islands. The road to it passes the impressive Beinisvord Cliffs on the west coast, a nesting-place for numerous sea-birds. The most modern fish-processing plant on the Farøes is to be found in Vágur on the east coast. Note also the votive church which was a gift from a Norwegian lady. 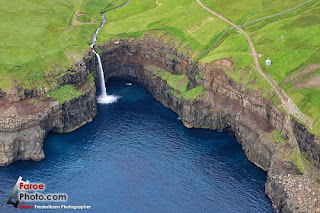 A runic stone can be seen near Sandavágur, on the island of Vágar to the west of Streymoy. The Bosdalafossur Waterfall is scenically most impressive. The unique rock formation known as the "Trøllkonfingur" (Witch's Finger), on the extreme east coast, stands 350m/1,150ft high; King Frederik VII, who visited the island in 1844, was most impressed by it. There is a Folklore Museum in Miøvágur, a small village south of Vágar.

Vidoy, in the middle of a hilly area on the island of Vidoy, is the northernmost point in the Farøes. From Cape Enniberg (750m/2,460ft) there is a fine view of several islands. The cliffs to the north of Viøareiøi are home to immense colonies of sea birds. 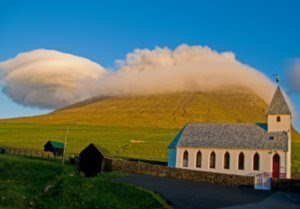 The overwhelmingly spectacular nature is the main tourist attraction and there are many opportunities to experience these wonders.There are multiple possibilities for hiking, trekking and fishing, and the Faroe Islands are a bird-watchers paradise. Boat trips, bus tours, riding treks, bird watching, hiking or trekking can be arranged from the tourist information office in Tórshavn.Faroese history is exhibited in the historical museum in Tórshavn, and all year round original Nordic Arts and crafts of various artists are displayed in the Nordic House. 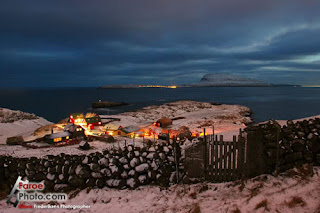 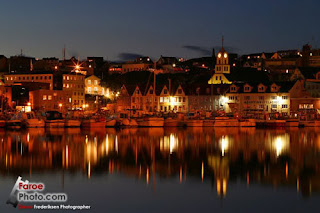 The Glowing Beauty of Faroe Island 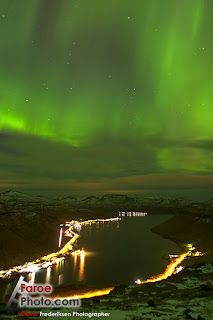