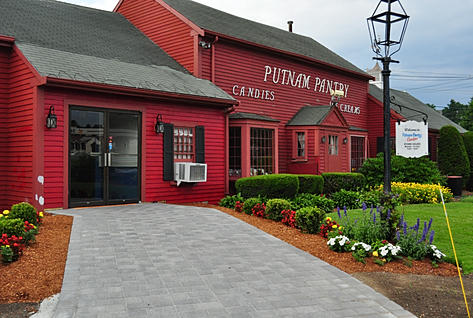 Putnam Pantry in Danvers, Mass., proves that a build-your-own ice cream smorgasbord is superior to a self-serve frozen yogurt shop any day.

Select your ice cream size at this long-time North Shore favorite located in a cozy, historic red cottage, and then go to town with just about any topping imaginable, including one of the best homemade chocolate sauces on the planet.  This chocolate nirvana makes sense as Putnam Pantry is not only about ice cream: It's is a third generation chocolate and candy maker where, on the premises, candy makers stir large simmering kettles containing white, milk and dark chocolate, pastel toppings and sweet fillings.

All is phenomenal here, but it's the sundae bar that many prefer. After all, ice cream is an American pastime for kids of all ages, and after the frozen yogurt craze, many are coming back to the fact that ice cream just tastes better. With that in mind, Putnam Pantry does not disappoint with homemade ice cream that is amongst the best tasting in the area (although it is not made on the premises). It's the toppings that really put the Putnam Pantry ice cream experience over the top, although one could argue that the "Battle of Bunker Hill" sundae with 17 scoops of ice cream is the real drawing card.

All in all, this is a classic New England ice cream attraction not to be missed!

Subscribe to Welcome To Your New England Travel Guide