Tags: mumbai india
August 29th 2008
View original
Let me take you to the 'City of Dreams', Mumbai (Bombay)- the glamour of Bollywood cinema, shopping malls, families eating bhelpuri on the beach at Chowpatty, red double-decker buses, a city with vibrant streetlife, India's best nightlife, and a wealth of bazaars.

Located Where? Mumbai is located on Salsette Island which lies at the mouth of Ulhas River off the western coast of India in the coastal region known as the Konkan. Most of Mumbai is at sea level and the average elevation ranges from 10 to 15 metres.

How do we Reach There? By Air - Mumbai has a vast infrastructure of rail, road & airways. It has the Chhatrapati Shivaji International Airport (Sahar) and the domestic terminal (Santa Cruz) are 30km (19mi) and 26km (16mi) respectively from downtown Mumbai.

By Rail - Two railway systems operate out of Mumbai. Central Railways handles services to the east and south, plus a few trains to the north. Western Railways has services to the north from Churchgate and Central stations. Trains travel frequently between Mumbai and Agra, Ahmedabad, Aurangabad, Bangalore, Kolkata, Chennai, Delhi, Kochi, Pune and Varanasi.The local railway that runs inside the city is one of the dependable ways of communication.

Best time to visit : The best time to explore Mumbai is between the months of September and April, when the weather is relatively dry and cool. The monsoon season begins from June to September. January is the coolest month, though 12°C (53°F) is about as low as it goes. March and October tend to swelter, with temperatures rising as high as 38°C (100°F). Extreme climate, from April to mid-June falling to almost freezing at night in winter, between November and February. Summers are hot with monsoons between June and September. The climate is pleasant between October and March, blast-furnace hot between April and June, and dripping with humidity between July and September.
Required clothing: Lightweight cottons and linens in summer with warmer clothes in winter and on cooler evenings. Waterproofing is essential during monsoons. Monsoon rains occur in most regions in summer between June and September.

Major Attractions : Chhatrapati Shivaji Maharaj Vastu Sangrahalaya (Prince of Wales Museum) near Kalaghoda- Mumbai's biggest and best museum displaying a mixed bag of dusty exhibits from all over India. Opened in 1923 to commemorate King George V's first visit to India (back in 1905, while he was still Prince of Wales), the vast collection inside includes impressive Hindu and Buddhist sculpture, terracotta figurines from the Indus Valley, miniature paintings, porcelain and some particularly vicious weaponry. You can take advantage of the free, multilanguage audio guides as not everything is labelled.

Chowpatty Beach in Charni Road- A favourite spot for full experience by strolling through the many beachside stalls for some bhelpuri or a head massage. The water is not the cleanest but the beach is litter-free, patrolled by lifeguards and lit up at night. Visiting Chowpatty in the evening is an essential part of any trip to Mumbai.

Marine Drive (Chowpatty)- is one Mumbai's most popular promenades and sunset-watching spots. It's twinkling night-time lights earned it the nickname 'the Queen's Necklace'.Chowpatty Beach remains a favourite evening spot for courting couples, families, political rallies and anyone out to enjoy what passes for fresh air. Eating an evening time bhelpuri at the throng of stalls found here is an essential part of the Mumbai experience.

Colaba (Churchgate)- a bustling district packed with street stalls, markets, bars and budget to midrange lodgings. While you're here, it's worth popping into the 1847 Church of St John the Evangelist, known as the Afghan Church. Nearby Colaba Market (Lala Nigam St) has plenty of activity and colour and is lined with jewellery shops and fruit and veg stalls. 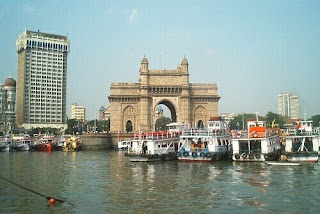 Gateway of India (Colaba, Churchgate)- was built to commemorate the 1911 royal visit of King George V. The gateway is a favourite gathering spot for locals and a top spot for people-watching. Boats depart from the gateway's wharfs for Elephanta Island and Mandwa. You can also take a joy-ride on the boat for a local trip round the gateway. You can see the famous Taj Mahal hotel opposite the gateway of India. Here you can ride in a Victoria - one of the horse-drawn gilded carriages known as Ghoda-Gaadi in the local language. Some distance away is the Fashion Street where you can bargain for some fashionable & trendy day to day clothes, jewellery, shoes.

Elephanta Island (by boat from Gateway of India) - Every day except Monday, tourist boats head out from the Gateway of India to this magnificent island, home to the most famous cave temples in Maharashtra. Carved into the solid rock of the island are a series of ornate Shaivite temples, covered in ornate carvings of Hindu deities.
The centrepiece of the complex is a monumental statue of Mahesh Murti, depicting Shiva as the creator, preserver and destroyer of the universe.Boats to Elephanta leave the Gateway of India regularly between 09:00 and 14:30 and the fare is around Rs90.00 on an economy boat or Rs110.00 on a deluxe boat. The last return service from Elephanta leaves around 17:30 . On the way, check out the giant freighters in Mumbai Harbour. The Elephanta Festival is a classical dance and music event on Elephanta Island. One can give a visit as an excursion trip just few kilometers away from the beach. This festival is usually held in the month February.

Museum Ship Vikrant (Mumbai Harbour)- Built in 1945 and bought by the Indian Navy in 1957, the massive aircraft carrier INS Vikrant now serves as a fascinating museum. Admission includes the ferry ride out to the ship, then a walk through the various quarters, the hold (displaying diving bells, submarines and various aircraft) and finally the enormous deck with take-off and landing strip. Tickets are available from the booking offices near the Gateway.

Jehangir Art Gallery (MG Rd, Kala Ghoda)- The Jehangir Art Gallery is one of Mumbai's principal commercial galleries, hosting interesting weekly shows by Indian artists; most works are for sale. Rows of hopeful local artists often display their work on the pavement outside this gallery. 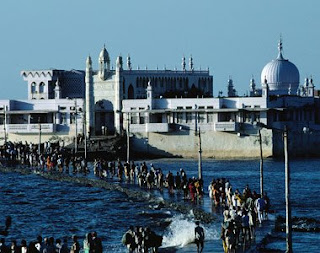 Haji Ali Mosque (Mahalaxmi)- Floating like a sacred mirage off the coast, the Haji Ali Mosque is one of Mumbai's most striking shrines. Built in the 19th century, it contains the tomb of the Muslim saint Haji - legend has it that Haji Ali died while on a pilgrimage to Mecca and his casket miraculously floated back to this spot.

Mahalaxmi Racecourse (Mahalaxmi)- Mumbai's horse-racing season runs from November to the end of April. Races are held on Sunday and Thursday afternoons (Saturday and Sunday towards the end of the season) at Mahalaxmi Racecourse. Big races, such as the Indian Derby in February, are major social occasions.

Kamala Nehru Park- At the top of Mumbai's Malabar Hill where the elite have built their plush modern palaces is Kamala Nehru Park, the hangout of the bourgeois middle class. It has little to offer by way of entertainment, apart from a "Old Woman's Shoe" relegated to a distant corner, but the view of the city is spectacular and unmissable. Its a vantage point that casts a proud eye on the entire city. 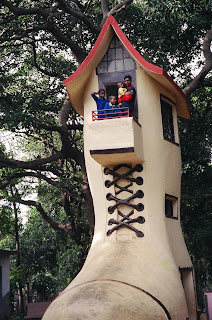 Hanging Gardens- Perched at the top of Malabar Hill, on its western side, just opposite the Kamala Nehru Park, these terraced gardens, also known as Ferozeshah Mehta Gardens, provide lovely sunset views over the Arabian Sea. The park was laid out in the early 1880s over Bombay's main reservoir, some say to cover the water from the potentially contaminating activity of the nearby Towers of Silence.

Mumbai Zoo (Byculla)- The Mumbai Zoo is remarkably well-maintained. The animals are a little few and far between, with the few local species in large cages including crocs, elephants, rhinos and a few bored lions. There's a small playground, and it's generally a popular place for families and couples to meander. 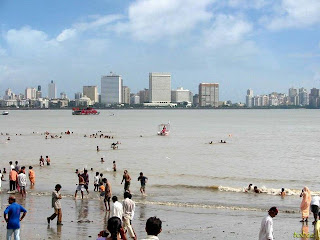 �Juhu Beach (Santacruz)- Like Chowpatty, uptown Juhu Beach is also a bourgeois paradise, filled to the gills with screaming children, courting couples and rowdy adolescents. If you want a more fancy excursion, however, retreat behind Juhu's many five star hotels, for a steaming cup of coffee and a splendid view of the coast. The most popular of these beachfront hotels are the Sun and Sand and Holiday Inn. The government run Juhu Centaur also has a 24 hour coffee shop with a view of the sea. You can also visit the Hare Rama Hare Krishna Temple (Iskon temple) which is closeby & famous for the Radha-Krishna sculpture. 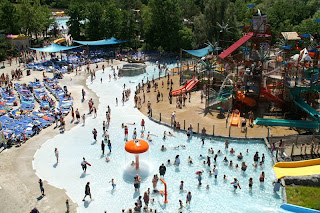 sselworld (Borivili)- This is Mumbai's only international-style theme park and amusement centre situated close to Gorai Beach. Special ferries get you across to the park and the entrance fee normally takes care of a fixed number of rides. These include the standard roller coaster and adventure themes, plus a water world section where kids can literally run amok. Summer is usually crowded, but the place also offers low budget monsoon packages and special deals on weekends. Check these out before you go. The famous Waterkingdom (waterpark) is also just besides the Esselworld. You can chose to go between the two.

Precautions : Make sure you book your hotels with reputed travel agents, keeping one's ears and eyes wide open while roaming in an unknown place always pays. It is advisable to keep the belongings well locked and should not left behind carelessly.

People are encouraged to maintain a high level of vigilance, remain aware of their surroundings, monitor local news reports, avoid crowded places, and take appropriate steps to bolster their personal security. It is highly advised to avoid the beaches for swimming and having sunbath. Visitors should be dressed decently. Avoid littering the beaches or polluting the sea.

Festivals and celebrations are observed by residents of all communities and religions. Diwali, Holi, Christmas, Navratri, Good Friday, Dussera, Moharram, Ganesh Chaturthi, Durga Puja and Maha Shivratri are some of the most popular festivals in the city. The local language spoken is Marathi.

Mumbai is well connected to most parts of India by the Indian Railways. Trains originate from Chhatrapati Shivaji Terminus, Dadar, Lokmanya Tilak Terminus, Mumbai Central, Bandra terminus and Andheri. Mumbai's suburban rail systems carry a total of 6.3 million passengers every day.Most of Mumbai's inhabitants rely on public transport to travel to and from their workplace. Transport systems in Mumbai include the Mumbai Suburban Railway, BEST buses, taxis, auto rickshaws and ferries.

Bollywood is the nickname for the Indian film industry located in Bombay (now known as Mumbai, though Mollywood hasn't quite caught on.) Indians are in love with movies. Mumbai (Bollywood) leads India in film production, its specialty lies with Hindi movies. Bollywood films are being shown in American and British theaters on a more and more frequent basis. These theaters have become community foci for the South Asian communities around the world. Bollywood's film production center is a government-owned studio facility known as "Film City" in the northern suburbs of Mumbai. Bollywood traces its start to 1911 when the first silent Indian feature film was released by D.P. Phalke. The industry boomed and today there are over 250 theaters in Mumbai alone.