We made a sudden plan for a short trip to  Lepakshi Temple in Ananthapur Dist of Andhra Pradesh. It was a weekend, and it happened to be on a Sankranthi Festival Day.  We left early morning by 7.00 from Bangalore. It was a foggy morning and the drive was pleasant. We  took 3 hours to reach there which is inclusive of our break for breakfast on the way.

First we stopped at the huge monolithic Nandi, and clicked some snaps. This structure is carved out of a single granite with finely carved ornaments, and smooth contours.   The colossal structure is 27ft in length and 15 ft in height and is the largest monolithic of Nandi in India.

After a few feet away, lies the main ancient Lepakshi temple on a rocky hill. 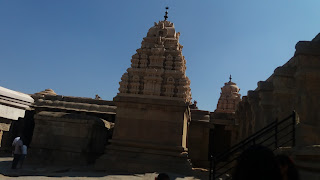 Veerabhadra Swamy temple at Lepakshi  was built in 16th century by two brothers (Virupanna and Veeranna) during the period of King Aliya Rama Raya of Vijayanagar kingdom.   The temples of Papanatheswara, Raghunatha, Srirama, Veerabhadra and Devi Durga are located in the same complex on a hillock named as Kurma Saila (tortoise shaped hill). 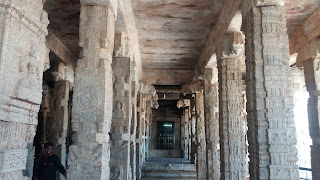 Since we reached in the morning it was pleasant to walk around; otherwise usually this place is very hot, and walking around would have been little difficult.

Lepakshi is famous for its hanging pillar which does not rest on the ground fully. It is the best known and a tribute to the engineering experts of the ancient and medieval  temple builders of India. However, it is a bit dislodged from its original position because of an unsuccessful attempt of an engineer during the British period, who had tried to move it to find out the secret of its support. 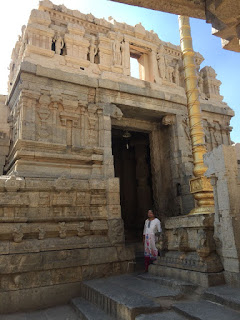 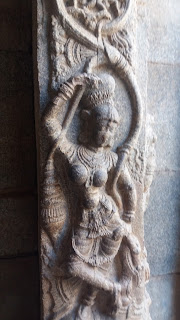 The main things for a visitor to see there are the large grey pillars and  the finest architecture in Dravidian style and paintings depicting stories from wars, marriage and fascinating tales of the bygone era.

There are many good restaurants on the way. We stopped at Udupi Swada for our breakfast (mouth watering idli and vada).


Since it was Sankranthi day few women were making the beautiful kolam designs on the floor before the temple steps.

On our way back, we had lunch at Nandi Upchar, a vegetarian Restaurant on NH7 near the International airport. The food was quite nice and reasonably priced.

Those who have not been to Nandi Hills, can take a turn there and visit the beautiful place.

If you have time in your hand and is interested in visiting another religious place, Puttaparthy temple is just one hour drive from Lepakshi.