The Beauty and the Horror I was inspired by the likes of the late great Mishima Yukio and Leonardo Fujita. None are related to sake or Jukujo love yet both share a love of ephemeral Beauty. The pulsing rock hard penis of the Japanese twink and the glory of the throne was Mishima's great masturbatory achievement through playwriting. Fujita's was the love of white skinned beauty accentuated by refined musculature - both men brilliant. Both men represented divergent views that need to be reconciled. One extreme Japanese writer after another exploring fragments of the same beauty in different forms and styles of writing and expression.

Vigilante: The spiritual successor to…
Beard Bib – Solution For Messy Groomi…
Dermstore – 15% off the most effectiv…

The story of the soul of Japan, is that of the bounding hulking beauty of the white skinned Jukujo, and streams of sake flowing down from mountaintops into mist thick hot outdoor onsen; snowcapped peaks in the backdrop with a fluttering Hinomaru. White people are lost in translation, and I might rescue you, but.... Well.... Hmmm. Stop trying to reinvent Nihonshu, and stop disparaging the symbols of this country. Leave it like it is and stop importing your gods here. Leave your white privilege elsewhere so that old traditions can still thrive here. You are not helping. Stop exporting Japan then reinventing it just to make a profit, too. First, we have to reconcile the old with the new generation. And don't steal my thunder. Stay in your lane. 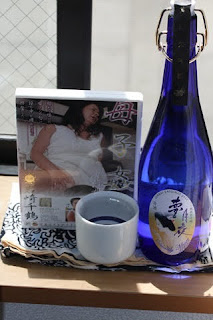 ("At any rate, don't confuse my obsession with moral turpitude either")

This blog cuts ✂️ through the beautifully gift wrapped bullshit. Removing all impurities that have poisoned the disposition of Japan. Mishima tried to remerge the soul of the nation back to its former glory through the power of his passion. Though his sacrifice was largely in vain, fragments of his soul are reborn in other forms, some through my expression.

Leonardo Fujita changed gods on his death bed. Renouncing those of his ancestors, died a Catholic. His exploration into white skinned worship took him to 🇫🇷 France where his skills were refined and honed. He even invented the color white in painting forever changing canvas art.

Before I fully digress, I recall the works of the late Shumei Okawa a convicted war criminal who was spared the same fate as his brethren translated the Koran into Japanese from his sickbed. He too changed gods. Disavowed by his god, never once was he honored at Yasukuni. In the end, he would try to save his own soul.

All of these men exemplified beauty in strength in their work in the latter part of their lives. Beauty and Death were synonymous with Mishima’s prose. That dying young and at the height of one’s beauty was better than dying old. White worship abounds in Japan, true, from antiquity to the present. It is a sin of the soul. The only white beauty is Asian beauty.

I wish to steer this great titanic, Japan, back onto its course. To help it reestablish its orbit. At the present, the whole country has been knocked out of its kilter. This needs to be remedies and that is why this blog was born. I seek to explore the beauty of the nation and its core gods and bounty. To remerge the elements that bring it balance and harmony through my prose.

("There are over 8 million gods in Japan! How many do you know or remember?")

I am a sake lover who enjoys the beauty of Nihonshu a drink that used to be revered for its godlike qualities, and reserved for the holy. Things have certainly changed. When I write about Nihonshu I like to include the essence of it and how best to enjoy it. In particular. I think sake is best enjoyed in nature surrounded by large breasted Jukujo in a hot tub tucked away in a deep valley far away from the peering eyes of the Tokyo pervs who have lost all sense of normalcy.

Japanese cuisine and Nihonshu enhance each other and bring out the essence of country. The spiritual ebb & flow of the nation. Combined with matrons, sake lubricates the wheels of social interaction and creates and other worldliness of merriment and laughter. A warm conviviality. I love it when a petite Japanese woman drinks with confidence and can hold her own. Japanese men in general drink poorly, and become dull and stupid. Whites become annoying and pretentious. Be more like me. Laid back and chill. Entertain the matrons. Eat slowly. Breath in the sweat and perfume of Jukujo while enjoying the aromatics of good Nihonshu.

This post first appeared on The Soul Of Japan, please read the originial post: here
People also like
Vigilante: The spiritual successor to Kung-Fu Master
Beard Bib – Solution For Messy Grooming
Dermstore – 15% off the most effective skincare products

The Beauty and the Horror