Snapchat Is Ready To Back In The Game, Daily Active Users Increase To 203 Million, Reveals Its 2019 Q2 Report

Snapchat has announced its Q2 performance update that shows a continuous increase in the users as well as revenue.

According to its Q1 report, the app had 190 million daily active users but by the end of Q2, the app managed to have 203 million users in a day (i.e: 8% year-over-year growth).

Gender-swap and baby lenses are considered to be the main reason behind its increased popularity. The reports claim that in May 2019, Snapchat has been downloaded almost 41.5 million times, which is more than double the number of downloads in April 2019.

The trending two lenses faced fierce competition from old age filter by FaceApp. The Q3 report is expected to be exciting as to see if the app still managed to do well than before.

In the last quarter, Snapchat had an increase of 4 million DAU. There has been a steady increase in Snap Original shows' audience and the company is planning to pay more focus on it.

Improvements in Android app have also aided the social network as it mentioned that there had been a 7% increase in spending Snaps after the introduction of the new version. The retention level of first-time users of Snapchat has also reached more than 10%.

Android had been ignored by Snapchat while their major focus was on iOS. But in April, fully updated Android experience was announced by the app.

With the improvements in Android version, Snapchat has done exceptionally well in regions where Android is more popular, as evident in the ‘Rest of the World" category of the report.

The average revenue per user stats is also increasing, creating hope and opportunities for Snapchat to grow.

"The average number of Snaps created every day grew to more than 3.5 billion in Q2 2019.", announced Snapchat in the report. Adding further, "Our audience watching content on Discover every day has grown over 35% year-over-year."

Snapchat shares have also seen a positive impact and the app is overall doing well in all fields related to it.

Evan Spiegel, CEO of Snapchat, appreciated his team for improvements in the app that led to favorable results.

From the market's perspective, Sapchat is not yet back to its old position as it previously was but this has given hope of doing better and coming back into the mainstream. Though there are other apps like Instagram and Facebook to give it a tough competition but Snapchat is realizing its potential and will thrive for better. 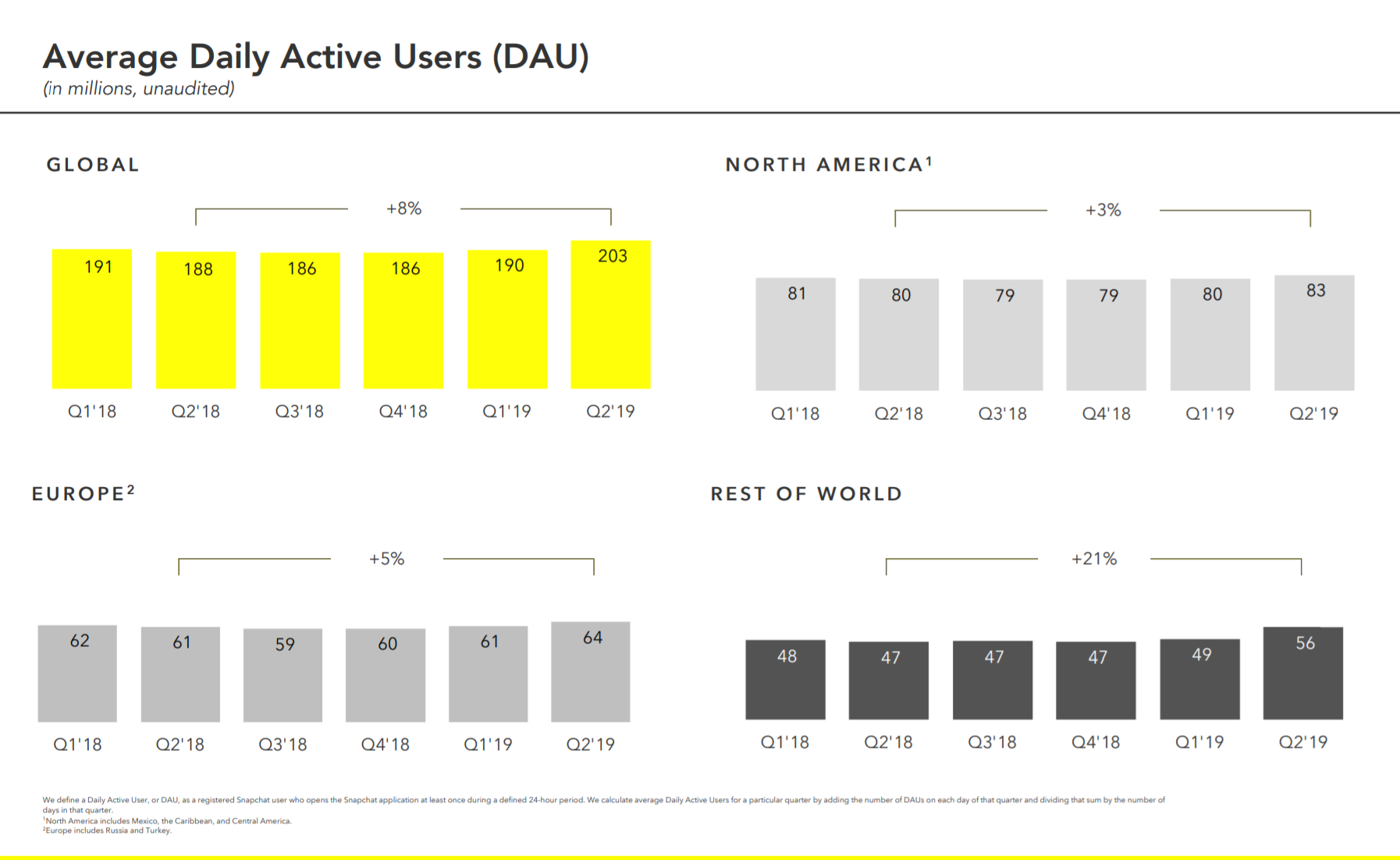 Read next: Snapchat is Reportedly Working on Replicating a Unique Instagram Feature!

Snapchat Is Ready To Back In The Game, Daily Active Users Increase To 203 Million, Reveals Its 2019 Q2 Report