cheetah games in the trees

Magda wrote:-
"Japie bought the Cheetah at an auction near Bloemfontein and we plan to keep her as a pet.
Nature conservation had a lot of specifications for the fence, size of the yard, and we had to present
a managing plan. A permit was issued, which has to be renewed yearly. We have joined the SA
Cheetah Breeders/Owners Association." 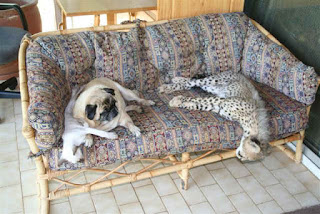 "It was quite a handful to introduce all of them: the young German Shepherd (8 mnths), the Cheetah (3 months), the Siamese kitten (2 months) and the Pug (old).The kitten and the pug were easy, but I kept the other two apart.
They were allowed to see each other through the glass sliding doors and after two weeks it
was easy to bring them physically together.
The cheetah and the German Shepherd chases each other on the lawn, so it saves me a lot of energy to exersize them (I am 59 years old!)."

"The moment the little Siamese goes out of the house to play in the garden (normally at sunset),
he has the full attention of both. The dog (playfully) puts his whole mouth around his little body and
the cheetah tackles him.(It amazes me that the Siamese tolerates it, and does not make use of the trees to escape). After a while the dog gets bored, and the two cats wander off to play in the garden.


"Sometimes at night it is quite a challenge to get the Siamese back into the house, but most of the time he is eager to be back." 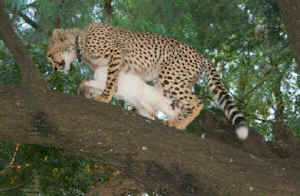 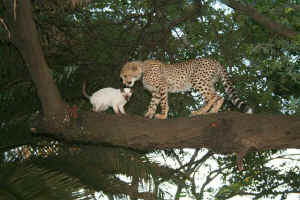 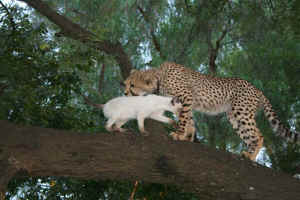 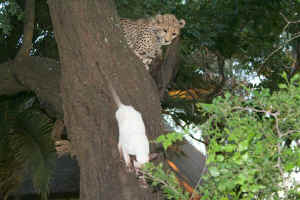 Last one down is a kitten.