The Ford Expedition and Lincoln Navigator are selling like hotcakes! Lincoln dealers say they cannot order new Navigators fast enough; the luxury SUVs are on the lot an average of just seven days before being sold. It’s a similar story for the Expedition, with an increased transaction price of $7,800 and retail sales up nearly 57 percent last month. Like the Navigator, the new Expedition is lucky to spend a week on dealer lots, with the high-level Platinum trim accounting for nearly 30 percent of total sales.

It’s worth noting how the higher trim levels continue to be the most desired in Ford’s lineup. With regard to the Navigator, nearly 85 percent of all buyers are opting for the higher-end Black Label and Reserve models. In fact, demand for the Black Label and Reserve series contributed to an average transaction price increase of more than $21,000 in January versus a year ago. Add to that how Navigator retail sales were up triple digits in every region of the country last month, and the growing interest from younger buyers, and it’s easy to see the demand is there.

In order to meet this seemingly insatiable appetite for large, luxurious SUVs, Ford is doubling down on their manufacturing strategies at the Kentucky Truck Plant, home of the Navigator and Expedition. The magic number in Louisville is 25: Production targets were increased approximately 25 percent and an additional $25 million is coming to increase overall “operational fitness.” The investment covers more than 400 new robots at the Kentucky Truck Plant, many of which were utilized during a remodeling of the body shop last year. The robots inevitably increase line speed but also keep employees safe from repetitive-motion injuries. A special “robot lab” was added, where software is tested and potential issues undergo troubleshooting away from the factory floor.

Also onsite in Louisville is a new 3D printer so parts and tools can be made quickly and economically. In most cases, manufacturing a prototype part with traditional methods can take eight to 16 weeks at a cost of more than $250,000 in tooling. Producing that same part with 3D printing can take days – or maybe just hours – and can be done for a few hundred to a few thousand dollars. Finally, the investment includes an overhaul to the data analytics system so the assembly line moves as efficiently as possible. These systems are as interesting as they are complex but in short, they help plant officials address thousands of concerns in near-real time. The “data analytics hub” at the Kentucky Truck Plant includes seven big-screen TVs with minute-by-minute updates showing whether production is on schedule or not. Any potential concerns are flagged and can be addressed accordingly.

The system also notifies workers as parts are running low so they can have a new batch delivered to their area before they run out. And like in the break room, a spare parts “vending machine” allows workers to easily locate any part.

The Kentucky Truck Plant opened in 1969 and employs more than 8,400 people, about 8,100 of which are hourly. The plant builds the Ford Expedition, Lincoln Navigator, and Ford Super Duty. Like the two former, the latter has a higher-end trim level Ford says is directly proportional to what buyers are looking for today, i.e. luxury and premium features. In fact, the demand for all three is so strong, workers are taking overtime, voluntary, and weekend shifts in Louisville. 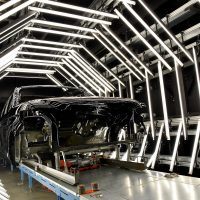