Inside The 2019 Toyota TRD Pro Lineup

And now, coming to a driveway near you – or perhaps your own – the 2019 Toyota Trd Pro Series.

The 2019 TRD Pro Series will encompass the Tundra, 4Runner, and Tacoma, and all feature new colors, unique exterior treatments, and a variety of off-road goodies designed and tested by TRD engineers. Of those goodies, the 2.5-inch Fox Internal Bypass shocks stand out the most. Tuned specifically for each vehicle, the aluminum-bodied Fox shocks offer generous but appropriate damping for a wide variety of situations, be it high-speed desert running, low-speed rock crawling, or simply driving around town.

Toyota points out the difference between the Fox Internal Bypass shocks and traditional ones, saying the latter usually have external bypass tubes on the body to fine-tune damping pressure. By contrast, the Fox design incorporates the Bypass Zones inside the shock. These multiple bypass zones offer a more cushioned and plush ride for normal driving, but can get progressively stiffer through the shock stroke to prevent bottoming out. If there is one truck that embodies the TRO Pro mantra, it’s the Tacoma. On the TRD Pro version, the Fox front shocks employ 46mm pistons and eight bypass zones, five for compression and three for rebound. The shocks are paired with TRD-tuned springs for an additional inch of lift, while a larger front sway bar promotes sharper steering. In the rear, the Fox shocks have 11 bypass zones, seven for compression, four for rebound, and are paired with the aforementioned piggyback reservoirs. The Tacoma also features “progressive-rate” leaf springs.

Other highlights include a front skid plate with red TRD lettering, cat-back exhaust, an Entune Premium JBL Audio system, Rigid Industries LED fog lights, and Goodyear Wrangler Kevlar All-Terrain tires (P265/70R16). The optional Desert Air Intake system, a snorkel-like device that runs up the passenger side pillar, allows the engine to take air (likely to be less dusty and dirty) from above the windshield. 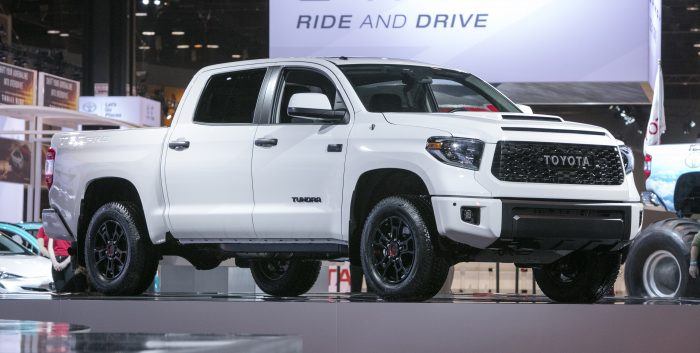 The 4Runner receives a one-inch lift and nearly an additional inch of wheel travel in its TRD PRO skin. The front shocks employ 46mm pistons and include seven bypass zones, four compression and three rebound. In the rear, there are eleven bypass zones, seven for compression and four for rebound, with the piggyback reservoirs again being utilized. The 4Runner’s “roost shields” help protect the inverted rear shock.

The 2019 Toyota Trd Pro lineup will arrive this fall. In the meantime, the vehicles are on display at the 2018 Chicago Auto Show now through the 19th at the McCormick Place in Chicago, Illinois. Inside The 2019 Toyota TRD Pro Lineup