The memoirs of the Leicester City miracle are still fresh in our minds as the 2016/2017 season gets ready to kick off. This year the English Premier League is expected to erupt with some huge “marquee” signings headed to England. The arrivals of Pep Guardiola at Manchester City, Antonio Conte to Chelsea and Jose Mourinho at Manchester United have already seriously hyped up this year’s EPL season.

CBD 2020: What to Expect + Our Top Pr…
Content is King and a Multilingual Bl…
Alibaba Plans to Tokezine it’s New Fi…
Best Gaming PC Build for 1080p: Under…
Why Christians Need to Become Mature …

With Jurgen Klopp already powering up his Liverpool revival with some great signings, Arsene Wenger is cooking up something special in North London for this year Barclays Premier League.

Watch the EPL Season Kick Off

The 2016/17 English Premier League kicks off on the 13th of August 2016 with an action packed weekend headed your way. 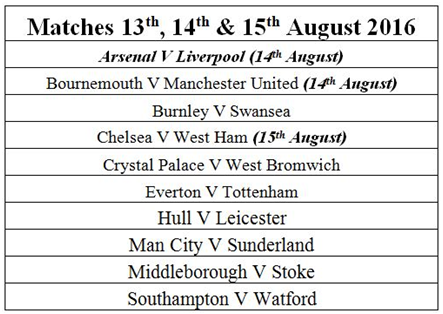 It’s only opening day and the FA is bringing to us one of the biggest matches of the year. Jurgen Klopp’s Anfield Army will go head to head with Arsene Wenger’s Gunners on opening weekend with both teams looking in top shape.

In a David vs. Goliath friendly at New Wembley the Anfield Reds decimated Luis Enrique’s Catalans 4-0 with Sadio Mane, Divock Origi, Jordan Henderson and Marko Grujic all gracing the score sheet. Have a look at Jürgen’s Reds in action:

Arsenal had a similar competitive clash with counterparts Manchester City. While Aguero was ready to begin the season where he left off last year amongst goals, the North London Reds were there to do business. Relive the highlights:

Where and How to Watch EPL 2016 Online

This weekend will mark the beginning of something special as The Foxes kick off the season with their first title defense against newly promoted Hull City. The EPL 2016/17 season will be available live and exclusive on the following online Streaming services within their respective regions:

You can log on to the websites of the broadcasters mentioned above to watch EPL matches live online. Do remember, all broadcasters are geo-restricted to viewers within the official region. You cannot access HotStar Premium from outside India similarly you cannot watch EPL on Optus outside Australia.

Just in case your region does not offer a free service to watch EPL 2016/17 live online, you can always work around the geo-restrictions and watch the season using other broadcasters. For instance, you can connect your VPN service to an India server and watch live EPL matches and highlights from anywhere in the world. We’ve recommended the best VPN providers for each channel that you want to unblock in our list above.

Sometimes it’s never about picture quality, it’s about the expert analysis and commentary. Countless of streaming fans have inquired about unblocking EPL streaming channels to watch the matches with their favorite commentators. Many football fans also require streaming EPL matches in their own language including those from Spain, Germany, France, Italy, Norway, Belgium, Bulgaria, Serbia and many others.

How to Watch EPL online in USA

NBC and NBCSN will broadcast the complete EPL season live for viewers across the USA. You can watch the live telecast on weekends on TV or tune into the NBC & NBCSN websites to enjoy high speed HD streaming on all your online devices.

Download NBC’s mobile streaming app today to watch NBC on mobile and tablet devices, or, simply log on to the NBC/NBCSN websites to watch ad free EPL online streaming. You will be required to submit your US Zip code to access the live streaming.

India’s premier sports streaming service will now host all the action of the Barclays Premier League online, with 380 matches broadcasted to your smart TV, Apple TV, Chromecast, mobile and PC devices. The service will be subscription based and should be available by the end of August.

All EPL live streams are broadcasted live without commercials or pop up ads. The channel is geo-restricted for viewers outside the sub-continent so remember to use a VPN if you want to watch this EPL season on HotStar.

Sky TV offers a dedicated online streaming package for cord cutters & streaming fans. You can now watch all 7 Sky Sports channels live when you sign up with NOW TV. The service gives you an all access pass to Sky TV’s sports channels plus allows you to stream from anywhere in the UK on 2 devices at the same time. NOW TV’s special Sky Sports bundle is available on NOW TV box, Xbox, PlayStation 3 & 4, smartphones, tablets, desktops & laptops, iOS devices, Macs, ROKU, Chromecast and LG Smart TVs.

Sky Sports and all its channels are geo-restricted for viewers outside the UK. You will however be able to unblock the service using industry legend PureVPN or high speed streaming ExpressVPN.

Africa’s premium sports broadcaster and streaming provider Super Sport is the only choice for football fanatics in Sub Saharan Africa, North Africa and West Africa to watch EPL live online. The service is subscription based and requires you to have TV cable subscription to watch matches online.

beINSports is possibly the most amazing streaming service now available in North America, Middle East, South East Asia and Australia. The channel will be the official English Premier League Broadcaster for the Middle East and Spain.

There is a special Sports & Entertainment bundle available from beINSports MENA for $10/month without any fixed contracts so you can cancel it anytime. The beINSports bundle offers compatibility with smartphones, tablets using the app while desktops and laptops can be used to stream using the websites.

The beINSports service is geo-restricted and can only be accessed by residents of the Middle East and Spain to watch EPL online.