Are you looking to play Japanese games on your Android device but cannot access the Play Store? If the answer is ‘yes’ to this question then this guide is for you.

A common question users ask on social forums is about the safety and security of using Qooapp. The proper analysis of this begins with the app and its permissions. We have passed the app as “Completely Safe” to use, since the app requires no special permissions on your devices. This means the app requires no records of your calls, messages, internet connection, contacts, other apps and gaming history.

Do remember that you always download the QooApp apk directly from the officially website and not from a 3rd party store. The issue with some third party app stores is that they carry some apps that have been deliberately tampered with to infiltrate user devices. Also consider confirming that the name of the app developer is the official one.

During the installation the only permission that QooApp required was for accessing files on the device. This permission as I understood and tested was needed when games were downloaded & installed on a particular device. 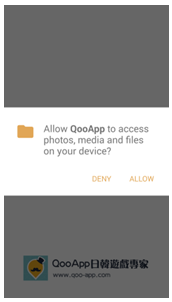 But before we get started with the guide, it is important to know that the Google Play Store is region locked. What this means is that the apps you see in your play store are being shown based on your location.

If you want to play Japanese games, Korean games, or Chinese games, you won’t be able to access such apps as they are only available in their respective Google Play Stores. So how do you play Japanese games on your Android device if you’re located outside Japan? Well there are two methods:

Use a VPN to Play Japanese/Korean Android Games

One of the easiest ways of accessing geo locked games on your Android devices is through a VPN service. Since Google Play Store works on your IP address, tracing your location and showing apps available within your region; you need a device that changes your true location and nothing comes close to this than a VPN service.

How to Access Region Locked Games Using a VPN

Now that you have selected a Fastest VPN service, just follow these steps to access Google Play Store of your choice and play Japanese games, Korean games or Chinese games.

We recommend that you use any web browser other than Chrome to carry out these steps. This is because the process for getting it to work on Chrome requires the deletion of various files, cache, cookies, and clearing pervious history.

Use QooApp to Play Japanese and Korean Region Locked Games

If you are looking for a quick way to play Japanese games or Korean games, then QooApp allows you just that. So what actually is a QooApp?

What is a QooApp?

QooApp is an app that provides you a list of all the latest and most popular games from Japan, China, and Korea. Using the app, you can download and play any game available on the Japanese, Korean or Chinese Google Play Stores.

The latest version of QooApp also supports numerous Indie games that you can download and play. There have been many speculations whether using Qoo App is safe or not. Since QooApp downloads directly from Google Play Store, you can say it is safe to use. There is a discussion going on Reddit in which people are discussing whether its safe to use QooApp or not. You can read the full thread here.

Which Method Should I Choose, QooApp or VPN?

The question beckons, which method should you choose to play Japanese games or Korean games and which one is better. From our analysis and review of both the methods, we recommend that you use a VPN for accessing geo locked games on Android devices.

QooApp Restricted to Certain Region: For starters, QooApp is only limited to certain region as you can only play Japanese, Chinese or Korean games. However, with a VPN you can access Google Play Store of any region in the world, provided a VPN offers a server in that country. Also, with a VPN by your side, you can download apps for any purpose, including games, on your Android device.

QooApp Tends to Crash: Secondly, many Android users have reported that QooApp tends to crash unexpectedly. This could be a problem when you are downloading a Japanese game and if the app crashes, you would have to download the app from the beginning.

With VPN, Apps Get Saved to Your Account: To negate the problem of app crashing time and time again, use a VPN service. When you download any app from the Google Play store, they get saved to your account and you can access them from ‘My Apps’ section. So for instance, you have to cancel the download for some reason or the download gets interrupted, you can easily re-download the app without connecting a VPN again.

Stay Protected with a VPN service: An additional benefit of using a VPN is that all your internet traffic gets encrypted and also your true identity remains anonymous. This helps to overcome any threats of unwanted intruders from hacking into your Android device and retrieve personal information. It also helps to avoid any chances of your Google account being blocked or traced since your true location remains hidden.

In a nutshell, you have two options for playing geo locked games on your Android device but the use of VPN outweighs the use of QooApp. The reasons listed above show that with a VPN, you have far better flexibility and versatility in accessing apps that are available in particular regions Google Play Store.

So whether you are in USA, UK, Canada, or any other place on earth and want play Japanese games on your Android device, you can use a QooApp or change the location of your Google Play Store using a VPN.

Remember that the final choice depends on your needs and usage. To help you out, we have highlighted the best VPN services you can use for accessing region locked apps and also shown the procedure of how you can unblock them on your Android device.

This post first appeared on Best VPN Provider - Tech, please read the originial post: here
People also like
11 things to do on vacation with out the kids
Why SEO Is The Next Big Thing in the Real Estate Industry
Creating and Selling Digital Products
Telegram Marketing solutions
Epoxy Flooring on Concrete
Healthy Meal Prep Ideas For Weight Loss