“The use of solar energy has not been opened up because the oil industry does not own the sun.”        Ralph Nader

As you know, everything in engineering is a compromise. No Energy source is perfectly suitable for every purpose. Plants and trees use the sun’s energy and convert it into growth. To make sunlight useful for us, we must convert its energy into another energy form.

An offspring of the early space exploration program, photovoltaic cells, are familiar to everyone. We just call them Solar cells, because they convert sunlight into electricity, powering our calculators (my old Sharp EL-336 since 1982) “Widespread commercial use of solar cells has mushroomed in Europe and Asia but has declined in America, where it was used to power the equipment astronauts used during their flights,” one report said.

Photosynthetic trees AND photovoltaic ‘solar trees’ grow in harmony in Styria, Austria.  While many plants turn towards the sun, the artificial tree needs to be rotated, or in this case, wait for the sun to be overhead again.          Photo from AMS

It is doubtful that their use has diminished; at least in the Province of Ontario large and small solar farms are mushrooming and harvesting sunlight in ever-increasing quantities. They will be needed to generate the large amounts of electrical current – without the use of carbon-based energy – to produce the hydrogen that we will need to feed future fuel cells.

Solar cells, connected into solar Panels, are on rooftops, on top of solar vehicles, on prototype aircraft, and elsewhere to catch and convert sunlight into electricity. In December of 2016 — there goes the timeline again, — but every new detail leads to humanity’s goal of sustainable transportation — The Solar Roadways project in the US successfully installed electricity-producing panels in a parking lot and in a town square. Even bigger projects are taking shape in Europe. The French Minister for the Environment, Energy, and Sea, Ségolène Royal, reports that “We today officially launched a kilometer long solar road project in Normandy. Nearly 3,000 Wattway panels running through a small village in northwest France are expected to produce an average of 767 kWh of electricity per day, peaking in summer months to as much as 1,500 kWh.” 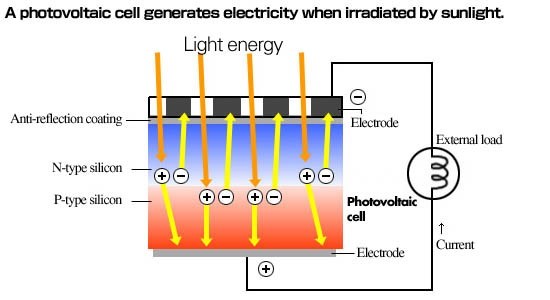 Schematic principle of a solar cell.  Many cells are connected in series to form a solar panel.  Many panels are needed to create usable amounts of electricity.

“Some 2,880 photovoltaic panels have been installed between the south exit of Route RD5 at Tourouvre to where it meets the N12 at le Gué-à-Pont for the Wattway trial. Each panel has been designed to withstand the punishment of regular road traffic and can be linked to electrical equipment and networks.”

“The installation is expected to produce somewhere in the region of 280 MWh of electricity each year, and an information display alongside the solar road powered by the PV array will provide locals with electricity production updates, as well as a running total figure. This trial site has enabled us to improve our photovoltaic panels installing process as well as their manufacturing, in order to keep on optimizing our innovation,” said Wattway’s Jean-Charles Broizat.

According to The Local, the state-funded project cost €5 million to construct and will undergo testing for the next two years, which will see around 2,000 motorists driving over the panels every day.

On this continent, the French road construction firm is working with the Georgia Department of Transportation to install Wattway on an 18-mile section of Interstate 85 in Georgia.

In my humble opinion, the colossal cost of that is a waste of taxpayers’ money. If governments would invest that money into hydrogen infrastructure, many of us could be driving a fuel cell car in the very near future. On the other hand, improved solar panels are needed to generate electricity to harvest that hydrogen; it’s a vicious circle, but progress is driving ahead.

Stop the press: Solar power is now the cheapest form of energy in almost 60 countries.