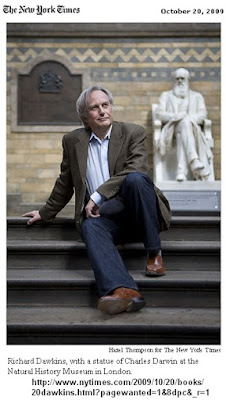 Back in 2010, Richard Dawkins was answering questions on Reddit and one of the questions was "Out of all the evidence used to support the theory of evolution, what would you say is the strongest, most irrefutable single piece of evidence in support of the theory."

There are several ways to answer this question. Personally, I would take a minute to explain the difference between the "theory of evolution" and the history of life. I would point out that evolutionary theory includes things like Darwin's natural selection and there is overwhelming evidence proving that natural selection exists and operates today. The entire field of population genetics, which included other mechanisms of evolution such as random genetic drift, is massively supported by thousands of published papers in the scientific literature. There is absolutely no doubt at all that the current basic tenets of evolutionary theory are correct.

As for the history of life, we are still working out the details but the broad outlines are firmly established. The best evidence that evolution accounts for this history comes from molecular data that involve the comparison of DNA sequences from different species. I would then go on to describe a generic comparison of genes from different species pointing out that they generate a tree that looks very much like a tree of common descent. This is incredibly strong support for the trees that previously were independently constructed by comparing morphology and embryology before DNA sequencing became common.

I would mention that it's the agreement of these twin nested hierarchies from independent data that overwhelmingly convince us that species evolved from a common ancestor. I would be sure to mention that the genetic data is based on random changes so not all trees will agree in detail all the time but when you put together the data from over one hundred robust trees the conclusions are irrefutable.


This seems like a pretty good answer until you realize who you are dealing with. The creationist crowd isn't interested in the big picture view of evolution and they're not interested in making allowances for trivial errors. They are more interested in nitpicking about details and showing that evolutionary biologists are wrong about evolution.

In that case, Dawkins played right into their hands. A video appeared just a year later and it pretty much refuted what Dawkins had said about the specific example he choose (FOXP2). This video was brought to my attention through today's post by kairosfocus on Uncommon Descent: BA77 and a vid on FOXP “1/2/3” molecular trees vs Dawkins’ claim of “You get the same family tree”.


The information in the video is essentially correct even though we can all agree that there are better ways of constructing phylogenetic trees. The FOXP2 example was a bad one for many reasons and using it undermines the correct point that Dawkins was making about the molecular evidence for common descent, and evolution as the mechanism.

This is why you have to be careful when dealing with creationists. The original answer by Richard Dawkins was posted over five years ago but the creationists are not going to let you forget it.