Professor, please can I have more marks? 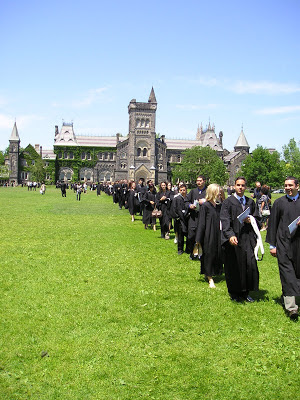 I submitted my grades on Thursday morning and they were approved by the Department of Biochemistry in short order. Once the final grades have been approved and submitted to the Faculty they can't be changed unless the change is approved by the Departmental Chair. Students may appeal their Grade by paying a fee to re-read their final exam but, even then, I do not have the authority on my own to change a grade. I have to justify any change in writing. This is a good thing.

Q&A with Phil Yates: Shaping the Futu…
How long does it take CBD to work? Ho…
Guess what? I am just like everyone e…
The Neighborhood Bar that Grew Three …
Kiran SSC Math’s 8900+ Chapterwise PD…
A few hours after the grades were posted I received an email message from a student [It's that time of year, again]. Here's part of what the student said,

I just saw my final mark ... which was an 76, and was very surprised. I thought I'd done well on the final exam, and had studied hard. My performance on the Midterm was good, and I had expected this to be just as well. As such, I wanted to humbly inquire whether it'd be possible to move me a 77 (a 1% increase) or even an 80. This small difference could make a very big impact on my GPA as I apply for positions to pursue a master or other professional degrees. With the mark as it is now, I fall below the GPA requirement for a program I wish to enroll in next year and will have to do another few courses or a full year to make up for it.

I have been trying my hardest to teach my students how to think critically. Let's apply some critical thinking to this request.

At the University of Toronto we use the grading scale shown below. 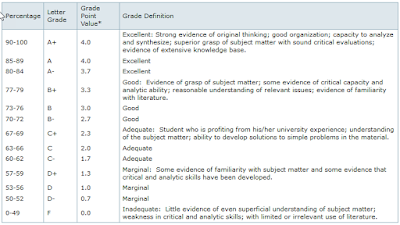 Students need 20 half-credit courses to graduate although many of them take several full credit courses. Let's do a rough calculation based on 20 courses. The grade in my course makes up 1/20th of the grade point average (GPA). Thus, an increase of 0.3 grade points will make a difference of 0.3/20 = 0.015 to the final grade point average. I don't know the magical GPA requirement for the program the student is applying to ... let's assume it's 3.7 and see what that means.

According to the student, their current GPA is about 3.635 so an additional 0.015 would bring it to 3.650 (= 3.7). I find this difficult to believe but, even if it were true, it means that the score in my course is not very much different from many of the scores the student has received in the other 20 courses, some of which were a hell of a lot easier than my course. The student could have done a little bit better in 19 other courses in order to achieve the desired goal.

I wonder if 19 other professors have received a similar letter?

I am not going to change the grade and my Chair would never approve a change unless I lied about the reason. What this email illustrates is a failure on our part to educate students about how a university works and how students and professors are supposed to behave (ethics). It's also a failure to teach critical thinking. (Also, you don't get marks for effort: "A" for effort.)

More importantly, it illustrates the stupidity of grade points and grade point averages. That system should be abolished at the University of Toronto. There are no logical reasons for perpetuating such a ridiculous and arcane way of measuring achievement. Since we assign percentage grades, why not just give the average as a percentage (e.g. 79% average)? That's how some other schools do it [Abolish the Grade Point Average]. (See Dawkins, R. The Ancestor's Tale p. 258.)

I've been advocating this change for twenty years and it's rare to find a professor or lecturer who disagrees. Everyone recognizes that abolishing grade points is a good thing with no significant downside. Why is the university so slow to change?

Professor, please can I have more marks?