This is the final nail on Blackberry users. If you are still glued to your old Blackberry Smartphone, it is time to sow it as a seed to someone else or separate the battery from the phone and keep it in a safe place for reference purposes.
The first blow that kept Blackberry unbalance was when Whatsapp discontinue supports for BlackBerry devices, this extensively affected their market share and caused Blackberry to bow to pressure by producing her firstAndroid powered device in 2015 calledPriv. 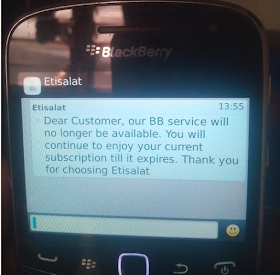 However, Priv failed the company, failed the city and failed her customers; hence T-Mobile, one of the largest retail store in the US have stopped the sale of Blackberry Priv,AT&T one of blackberry Allie also backing out.
CEO John Chen said in October that the company would exit the smartphone business, which has been on life support for years.
And now, Etisalat have discontinued Blackberry Internet Services also known as BIS subscriptions. Here is the message they sent to their Blackberry subscribers.
“Dear Customer, our BB service will no longer be available. You will continue to enjoy your current subscription till it expires. Thank you for choosing Etisalat”
Source : yomiprof.com

خدمة التجوال فودافون مصر بالتفصيل .. …
10 Fruits You Will Not Believe Are To…
How To Keep Your Child Safe By tracki…
Blackberry Evolve | Coming soon only …
Personalised Sweets in the Summer

How To Keep Your Child Safe By tracking GPS, Phone calls,Text Messages Easily

Personalised Sweets in the Summer

Two Poems: Anansi on Capitalism and Summertime by Shakeema Smalls