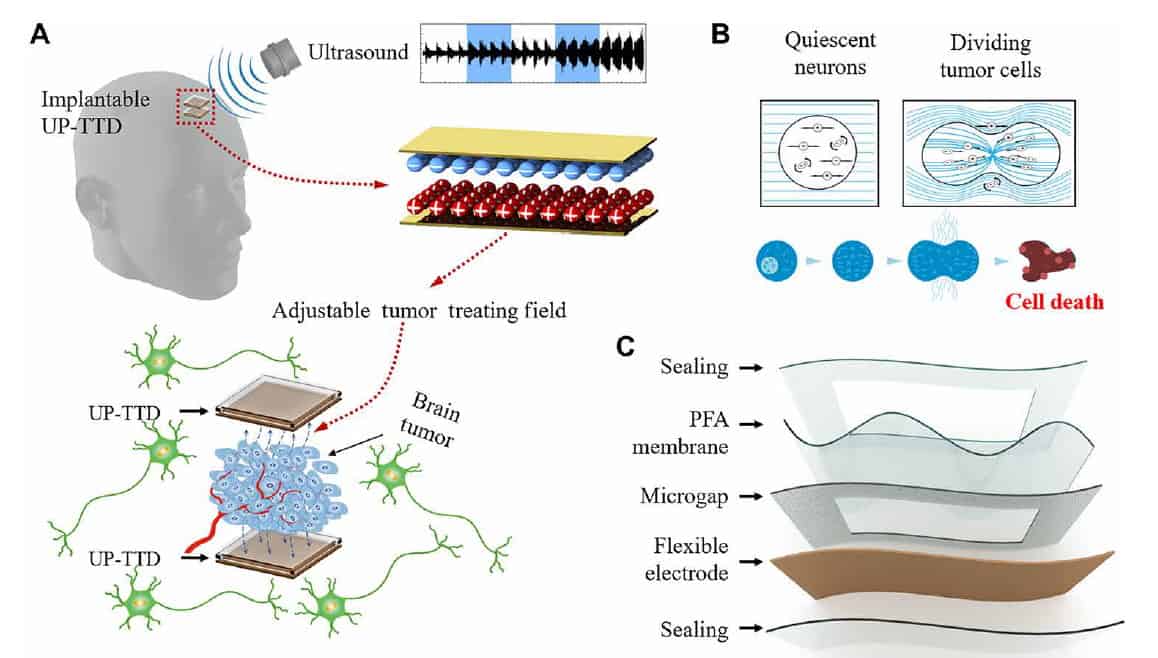 Successful treatment of brain tumours remains a challenge. Surgical removal is often the best option, but the inability to entirely remove all of the cancer cells can lead to recurrence and metastasis. Tumour treating fields (TTFs), which use alternating electric fields to interrupt cancer cells’ ability to divide, provide a potential new treatment option for brain tumours. For glioblastoma patients, TTFs are delivered following surgical resection and completion of chemotherapy and radiotherapy. Clinical trials have shown that the technique can notably extend survival for some patients.

Commercially approved TTF devices in clinical use, however, are cumbersome to use. Patients with shaved heads wear a cap-like device containing transducer arrays that deliver the TTFs to the brain for a recommended 18 h daily, for a prescribed number of days. The cap is used with an electric field generator, a power source and a connection cable.

Principal investigator Bingzhe Xu, of Sun Yat-sen University in Shenzhen, and co-researchers successfully tested the UP-TTD in vitro with human cancer cells and in vivo with laboratory rats. Writing in Science Advances, they note that the device inhibited the growth rate of human tumour cells by around 58%, and reduced the size of malignant tumours in rat brains by 78% compared with controls.

TTFs work by disrupting mitosis, the process of cell division, which occurs more frequently in cancer cells than in healthy cells. The TTFs do not affect normal neural cells, but rather act upon specific highly charged proteins in the cancer cells that are essential to cell division, thereby slowing tumour growth and its ability to spread.

To create their implantable device, Xu and colleagues integrated all of the components into a single flexible membrane chip with a thickness of less than 500 µm, capable of adapting to the irregular surfaces inside the brain. The core component is a wireless ultrasonic energy converter that couples ultrasonic mechanical vibrations with a triboelectric generator to convert mechanical to electrical energy. The UP-TTD is packed within a thin layer of biocompatible material for biosafety, and is designed to maintain a stable output under varying environmental conditions.

Upon external ultrasound excitation, the UP-TTD generates a tunable alternating electric field. For patient safety, the team recommends an ultrasound power density of 0.2 to 0.4 W/cm2 and intermediate frequency electric fields of 100 to 300 kHz.

The researchers first analysed the impact of the UP-TTD on glioblastoma cells in vitro. After 12 h exposure to the UP-TTD, the tumour proliferation rate was significantly inhibited. They then implanted the device in the brains of tumour-bearing rats. Compared with control animals that received no treatment, the treated rats showed much smaller areas of cancer, indicating a significant tumour-inhibiting effect in vivo.

High levels of ultrasound energy can exert unexpected thermal and mechanical effects that can cause necrosis, apoptosis and abnormal cell behaviour. For this reason, the researchers recorded temperature changes in real time after device implantation and in a control group of tumour-bearing rats treated only with ultrasound. None of the rat brains in either group experienced significant temperature rise, and there were no inflammatory responses during a 21-day observation period.

As well as alleviating the need to use bulky equipment and to wear a cap, the UP-TTD only requires a minimally invasive technique to implant. In addition, multiple devices can be implanted to increase the therapeutic effect. In contrast to traditional TTFs that treat the head as a whole, the implantable device enables a controllable volume as small as 1 cm3 – more than 1000 times better spatial resolution than existing techniques. The UP-TTD is compatible with most commercial ultrasound devices, expanding the feasibility for general application.

“The encouraging results of the UP-TTD raise the possibility of a new modality for brain cancer treatment,” write the authors. “This device not only provides a safe, effective, and reliable implantable solution for the treatment of brain tumours, but also provides new hope for the rescue of patients with brain tumours.”