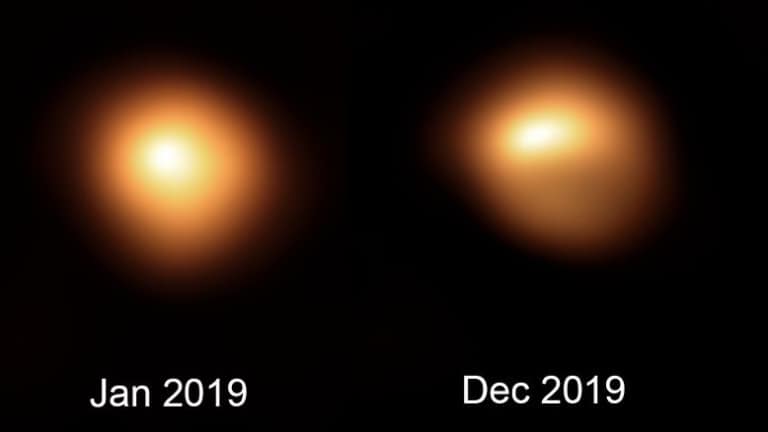 Obscured by a cloud: the bottom panel shows a time series of the expected ~400-day pulsation in the brightness of Betelgeuse (blue dashes) as well as the measured brightness (orange line). The top panel shows corresponding illustrations of the ejection and the obscuring cloud. (Courtesy:NASA/ESA/Elizabeth Wheatley (STScI)

Further insights into the curious dimming of the Star Betelgeuse have been unveiled by an international team of astronomers led by Andrea Dupree of the Harvard–Smithsonian Center for Astrophysics. The researchers used observations by the Hubble Space Telescope and several other instruments to show how a large convective cell rising to the surface of the star could have ejected a huge amount of material into space – creating a cloud that blocked some of Betelgeuse’s light from reaching Earth. The work confirms previous research that linked the obscuring cloud to a large cool spot observed on the surface of the star.

Betelgeuse is a red supergiant star that is about 548 light–years from Earth and is one of the brightest stars in the sky. Normally the brightness of the star pulsates with a period of 416 days, but in 2019–20 light output from the star dropped to an unprecedented low before recovering – an event called the ”Great Dimming”.

Astronomers believe that the dimming was caused by the ejection of material from the star, but the exact nature of the process was unknown.

“Our [research] pulls together a vast number of observations to trace the dynamics of the mass ejection and compile a logical timeline for its occurrence,” Dupree tells Physics World.

Besides Hubble, these observations included data collected by the SPHERE (Spectro—Polarimetric High-contrast Exoplanet REsearch) instrument on the Very Large Telescope in Chile, which showed a dark, cool spot in Betelgeuse’s southern hemisphere. The team also used data from Japan’s Himawari-8 weather satellite, which by chance observed Betelgeuse in the background of its Earth observations. These observations by Himawari-8 connected the cool spot to a cloud of dust that obscured part of the star.

Dupree and colleagues’ model suggests that an enormous convective cell rose through Betelgeuse’s interior, forming a huge bubble on the star’s photosphere – its gaseous surface. This caused a vast plume of material equivalent to the mass of Mars to leave the star. This ejected material travelled through Betelgeuse’s diffuse outer layers, where it cooled and condensed into dust. Meanwhile, the roiling stellar surface was left with a giant wound that plasma expanded into, cooling along the way. This created the large dark cool spot that had been seen on the star.

Daisuke Taniguchi of the University of Tokyo led the analysis of the Himawari-8 observations but he was not a member of Dupree’s team. He tells Physics World that “This new concept of a surface mass ejection sounds like the most reasonable one to explain all the observations”.

Although the dust has now dissipated, having been driven away by Betelgeuse’s stellar wind, and the star has returned to its normal brightness range, Dupree’s team believe that the photosphere is still unstable.

“I like the analogy of an ‘unbalanced washing machine’ as it tries to come to a new equilibrium,” says Dupree.

The roiling instabilities resulting from the photosphere sloshing around in the wake of the surface mass ejection is currently masking Betelgeuse’s 416-day pulsation period. Dupree describes this pulsation period as the star’s fundamental mode. These pulsations are typical of red supergiant stars such as Betelgeuse, and their period varies from star to star depending upon the star’s mass.

“I believe the intrinsic 416-day pulsation rate is still ongoing,” says Dupree. “The period may not be exactly the same once Betelgeuse recovers, but it should be a relatively stable pattern.”

As well as the 416-day pulsation period, there is also an underlying 2100-day period that is not so well understood. Some researchers believe it is related to the time it takes for giant convective cells on the photosphere to turn over. The Great Dimming came just after the 2100-day cycle reached a minimum brightness, which also coincided with a minimum in the 416-day cycle.

In the mid-1980s, the late Harvard astronomer Leo Goldberg predicted that when long-term and short-term minimums coincide to create a grand minimum, unusual changes in the star’s brightness and activity might occur. Goldberg’s theory had been mostly forgotten, but since the Great Dimming it has been very much in line with current thinking.

With better monitoring of the star by both professional and amateur astronomers than in the 1980s, there is a greater chance of spotting when something is amiss on Betelgeuse.

“Astronomers should keep focusing on this exciting star,” says Taniguchi, who will keep monitoring Betelgeuse with both the Himawari-8 and Himawari-9 satellites. Meanwhile, inspired by Taniguchi’s success with weather satellites, Dupree and her colleagues plan to use archive data from the NOAA’s GOES series of weather satellites to look at Betelgeuse’s activity.

Betelgeuse’s importance to understanding other red supergiant stars cannot be understated. Betelgeuse is a fairly typical red supergiant, so astronomers expect similar surface mass ejections to occur on other stars.

Dupree believes that detailed observations of Betelgeuse will be key to understanding other stars. “I would like to think that Betelgeuse can be a Rosetta stone for stellar physics,” says Dupree.

A preprint of the paper is available on arXiv and the paper will be published in The Astrophysical Journal.

The post How Betelgeuse blew its top and lost its rhythm appeared first on GulpMatrix.